Bees are extraordinary creatures. They move from plant to plant transferring pollen, making sure that the species thrives.

They are so necessary in our gardens and it is a shame that their numbers are decreasing in part due to huge mega farming operations, loss of their habitats and pesticide use.

One of the Fans of the Gardening Cook on Facebook, Jennie, has shared two extraordinary photos showing the change of color that she believes the bees have had on the original parent lily. 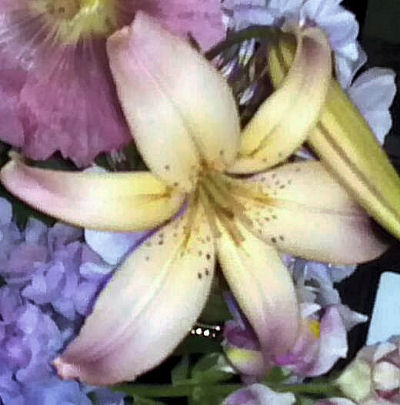 This is Jennie’s original lily, before bees mixed pollen from a near by stargazer lily into the parent plant.  Notice how the colors are subdued and very creamy overall.

The next photo shows the dramatic change.  It is the same lily but a new bulb and shows the flower that has changed color.  Look at the difference in color! 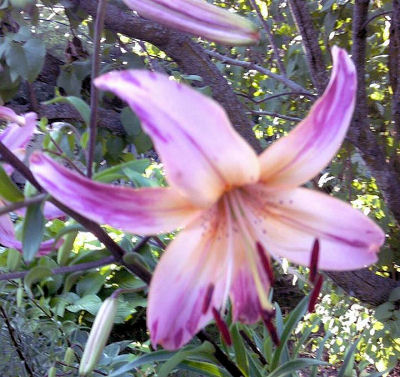 Jennie says that “streaks appeared in 4-5 of the flowers last year. This year, they are in nearly all of the offshoot bulbs from parent bulb.

The peach bulbs were planted 6-7 yrs ago,  and the stargazers about 4-5 yrs ago. Bulb clumps (off parent plant) are full bulbs now, not bulblets, so the colors are very noticeable.

The lilies are in 2 different gardens, about 20 ft apart.”

Was it the bees?  Perhaps, but there could be other reasons too.

For hybrid lilies to be created, a male and a female parent was needed.  It is possible that one parent was white and one purple and the bees did not make the change but the original parents did.

It is also possible that the purple lily probably was the stronger genetically and has slowly reverted the hybrid to it’s color.  The whole clump may be pink next year!

If the lily is not sterile and the bees pollinate the bloom, the bloom produces seeds that are not sterile.

These seeds can be released and be transferred.  Plants springing up nearby might be either color as well.

Whatever caused the  color change, there is no denying that it is dramatic.  Thanks so much for sharing the story Jennie! 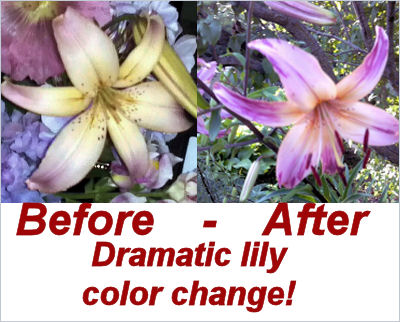 I had red and white lilies, and farther away I had orange. This year all are orange... :( I'm sad they all turned orange and I also find it strange.

I had 5 different colored asiatic lilies which I planted about 20 years ago (pink, yellow, orange, red, white). The last few years they have all completely changed to a two-tone orange-red flower. So weird.

@Joan Giammarino, Thank goodness I decided to Google this change. I thought I was delusional! I told my son, the lillies used to be pink and white, now they're all yellow! A different smell too! Beautiful but unexpected.

I have so appreciated reading this thread, in my search for an explanation for my lilies completely changing colour! Last year I bought a sole orange lily for my window boxes- and this years I have two pink/red ones, and the original plant has just today opened the first of its 4 WHITE flowers! They are in two window boxes- the pink/red in both- including one shoot from the original orange bulb. Maybe cross pollination- but the only other lilies I see from my window are a neighbors orange ones, in window boxes on a neighboring building. Mother Nature is so fascinatingly unpredictable!!

I have lilies in 6 different tubs. . Some tubs had white, one very pale pink, one burgundy. They were all different variety’s. They have all come out beautifully but are all burgundy! I have one pot of a tall variety that I am waiting to see what colour they will be hopefully very pale pink. So very strange I will have to buy more white ones

I moved around some of my orange tiger lillies, now I have three different colors! beautiful.I thought it was the soil.

Have four patches of multi colored Lillies. There are 2 or three original colors in each bed this year but the rest are a beautiful yellow. Do you think they will change color back to their original? I'm convinced it is lack of pollination as my Cucumbers are not maturing properly.

it's hard to say how any plant will act over time, but once the color has changed, in my experience, it does not revert back.