This project for making watermelon play dough is super easy to do. The project takes less than ten minutes to make and the end result smells great.

Watermelon season is here and both adults and many kids love to grow them. (and eat them too!)

Today we’ll be making red, green, white and black play dough to form into watermelon triangles. Making your own play dough at home is easy using the recipe below.

Don’t scent the playdough when you make it. This recipe shows how to give it the watermelon smell using Kool Aid after making the dough! 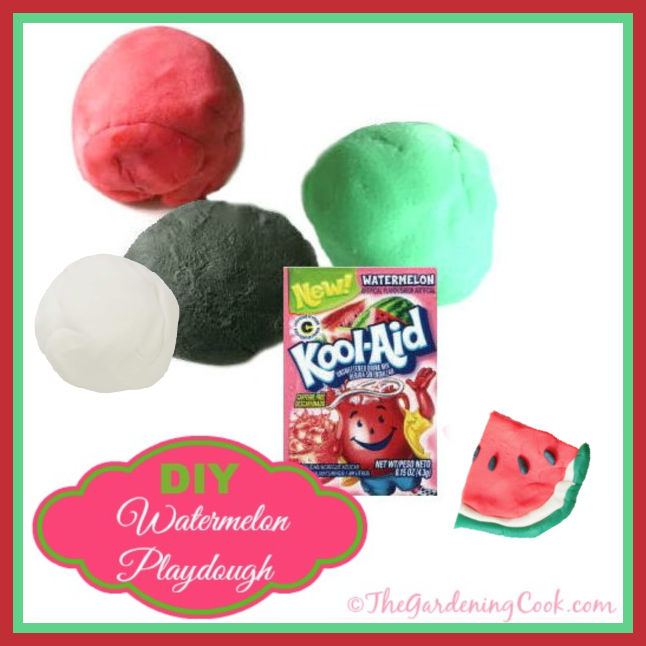 Some of the links below are affiliate links. I earn a small commission, at no extra cost to you if you purchase through an affiliate link.

You can buy store bought play dough, of course, but you’ll end up paying again and again. Fortunately, making play dough is easy, inexpensive, and fun for kids of all ages.

This tutorial requires cooking on the top of the stove. Be sure to help the kids with this part.

This method seems to end up with a better textured play dough that lasts longer than uncooked varieties. 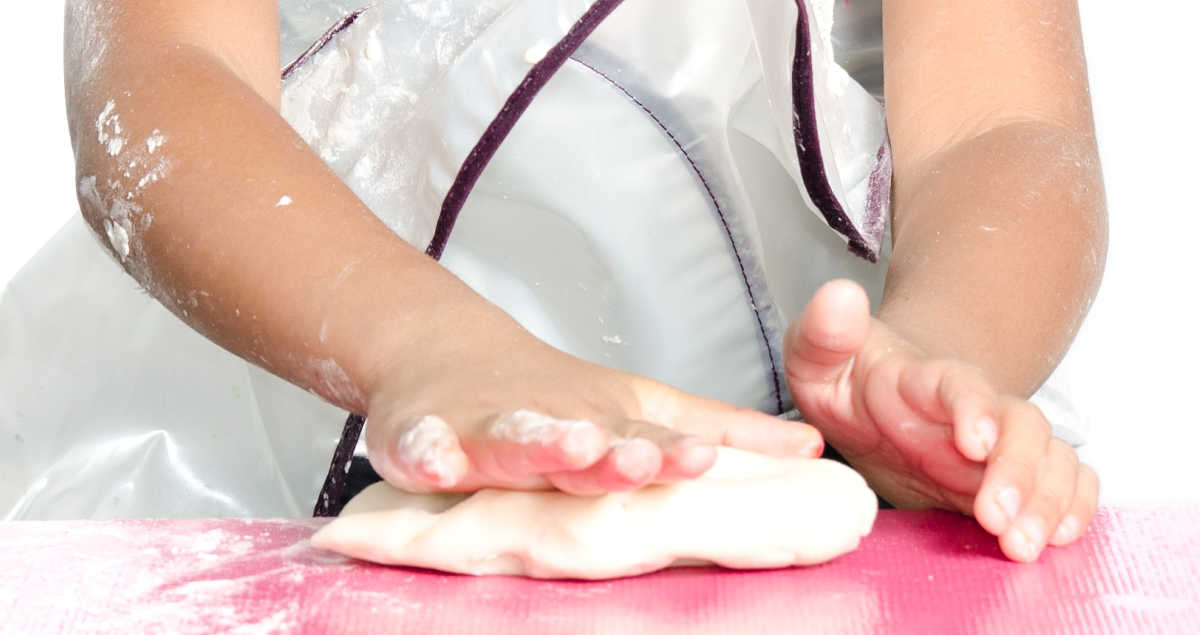 To make the playdough, you will need the following ingredients:

NOTE: Each flavor of Kool Aid has a different scent. You can make other fruit shapes out of the finished homemade play dough, in addition to this watermelon variety.

Mix all of the ingredients together, and stir over a low heat. After about three minutes, the dough will begin to thicken – almost like mashed potatoes.

Cook a few more minutes until the dough begins to pull away from the sides of the pot and starts and clump in the center. Remove from the heat and allow to cool.

If you find that your dough is too sticky, just cook it longer until it feels like store bought play dough. Knead until the dough is smooth. 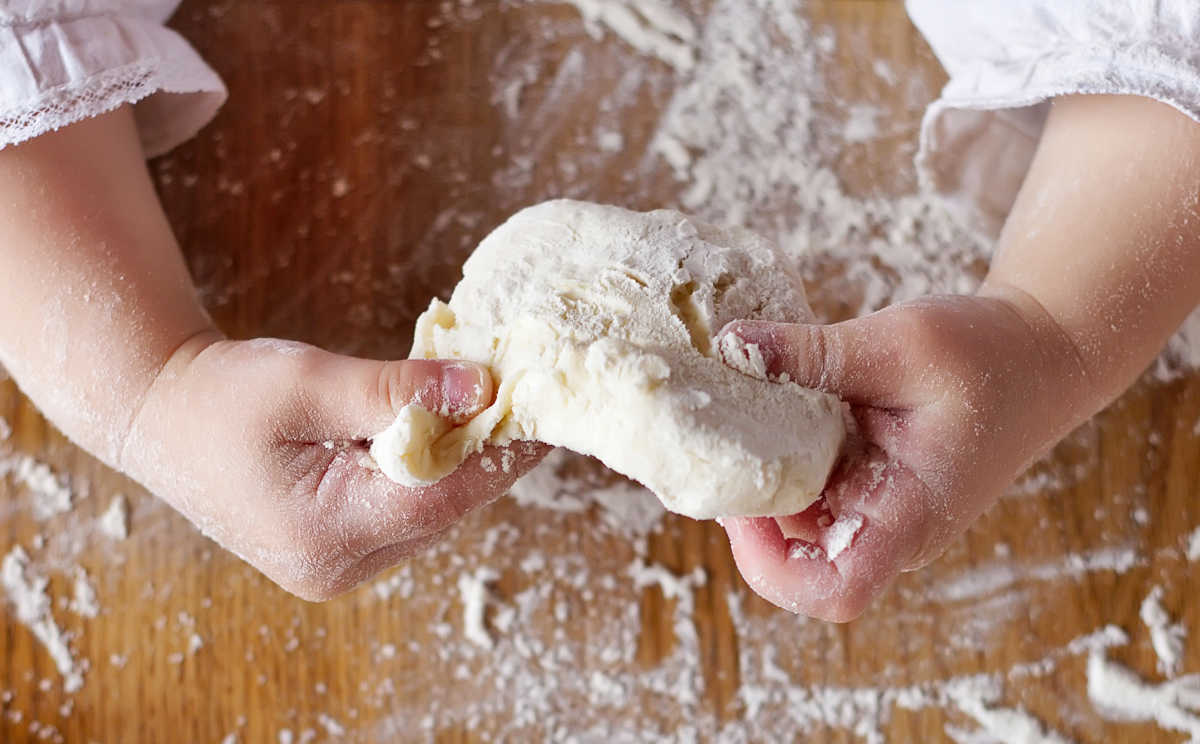 Divide the dough into four pieces. Use the food coloring to tint three pieces red, green and black.

The red will be the largest ball, followed by green, white and black. Knead until the color is uniform. 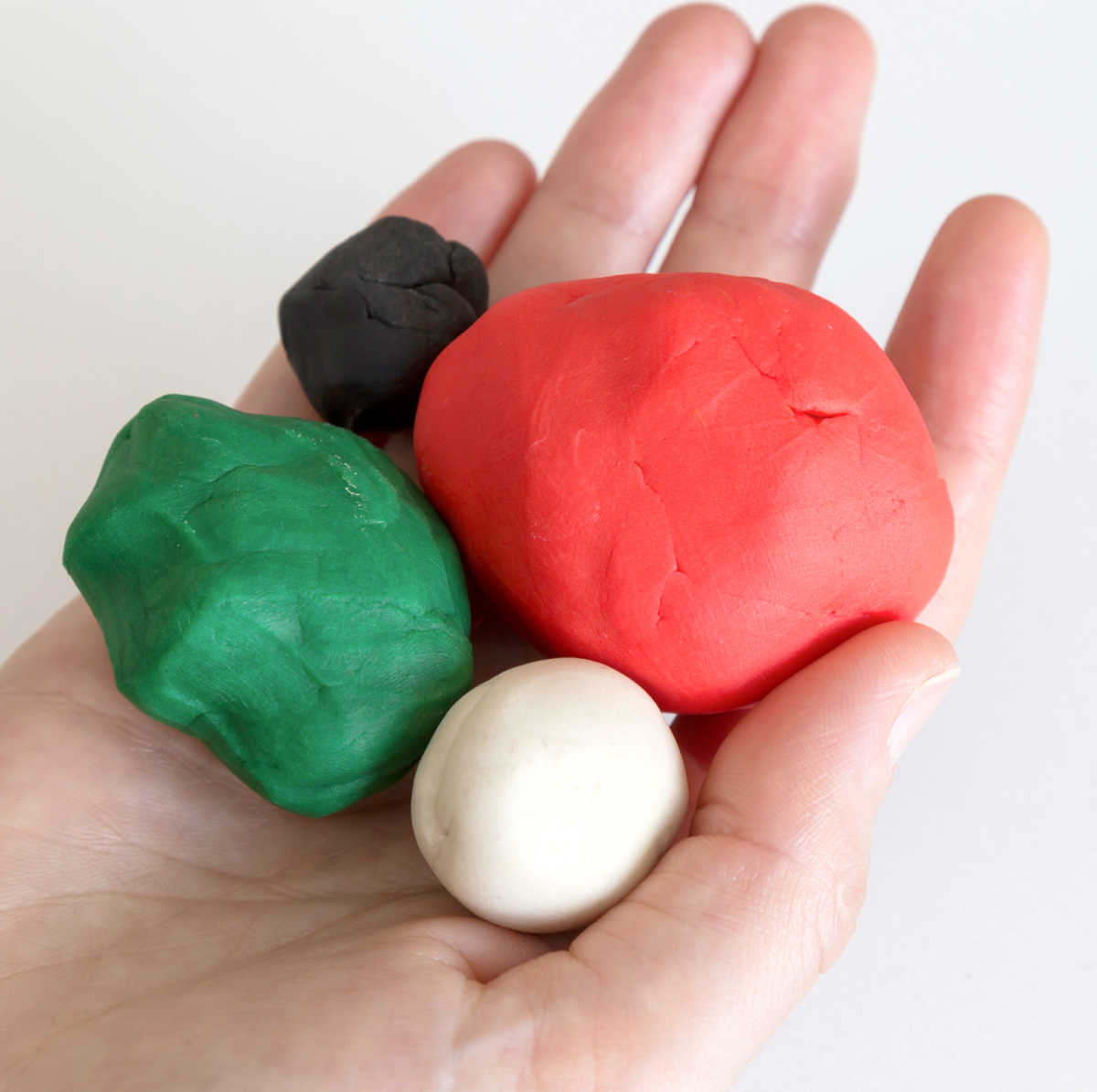 **Warning:**  Be sure to keep this mixture away from dogs and other pets.  Also don’t let small children eat it. The finished product has a great smell that pets and small children may think is food. However, the homemade play dough contains a lot of salt and this can be dangerous, especially for dogs.

Store the homemade play dough in zip lock plastic bags for up to three months.

Do you have some flour, salt and oil? Add some flavored Kool Aid and make watermelon playdough. Find out how on The Gardening Cook. 🍉🍉🍉 Click To Tweet

Take the red and green playdough and mix half a package of watermelon Kool Aid with each color (you’ll end up using the whole package for both).

You don’t need to flavor the white or black. They will be used for the seeds and rind.

You can find the watermelon Kool Aid at your grocery store and online. It smells divine and your child will just love the smell.

Roll the dough to make a half moon shape of red play dough. Flatten the green and white and press to make the rind.

Push the three pieces together. Take tiny pieces of the black to make watermelon seeds and press into the red area.

Cut in half to make triangle slices. How easy is that? 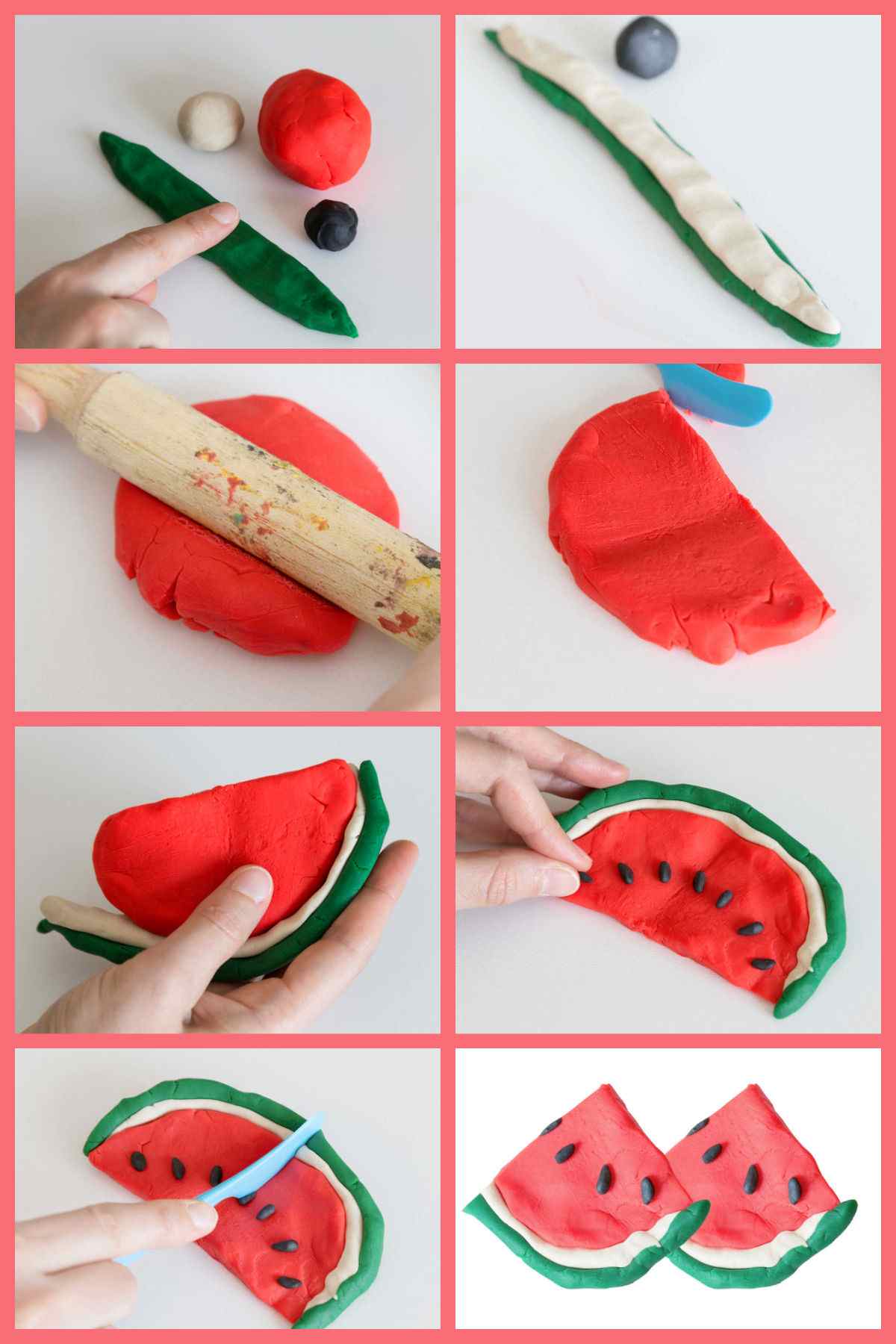 Imagine the fun your kids will have making their own watermelons! 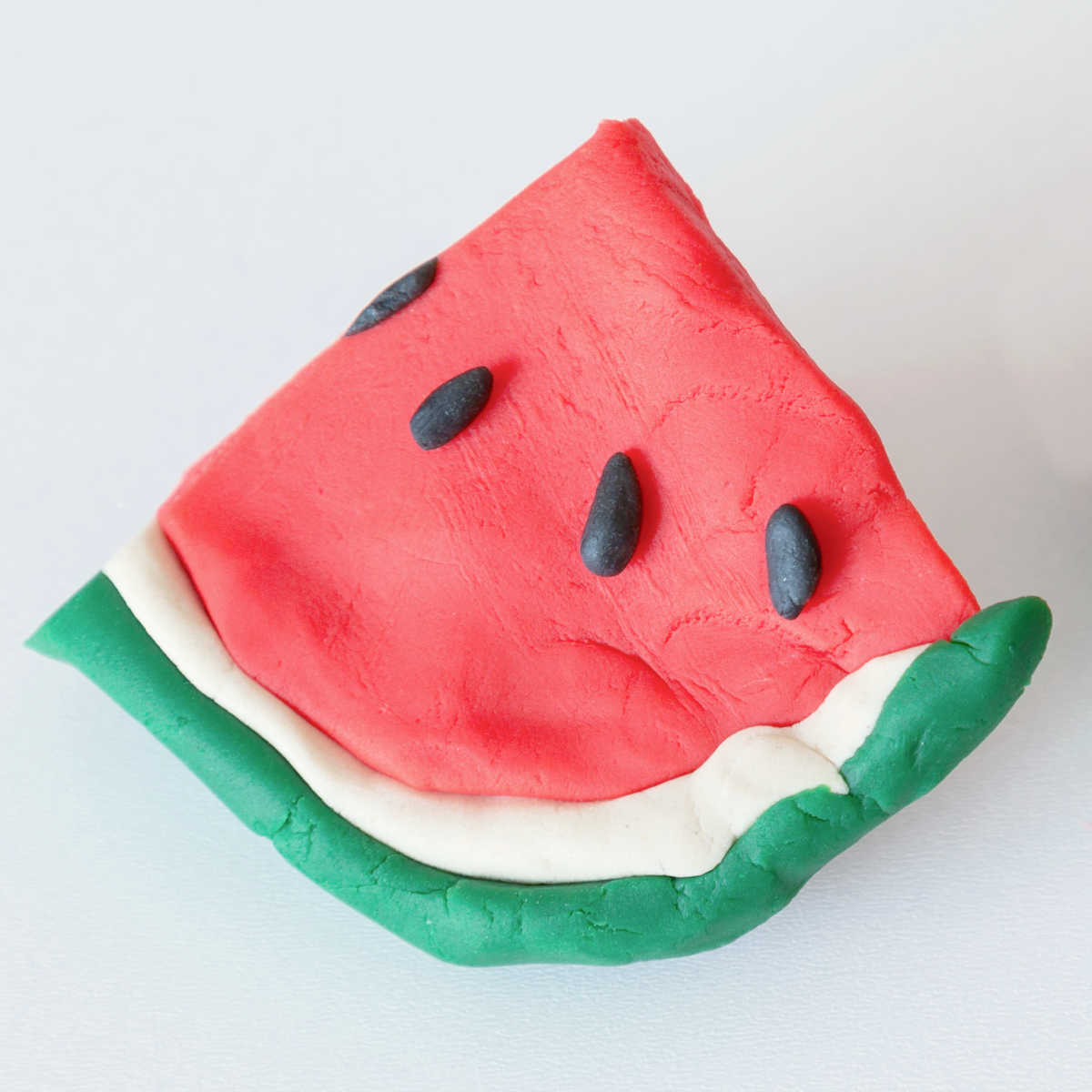 Would you like a reminder of this post for making homemade play dough? Just pin this image to one of your DIY boards on Pinterest so that you can easily find it later. 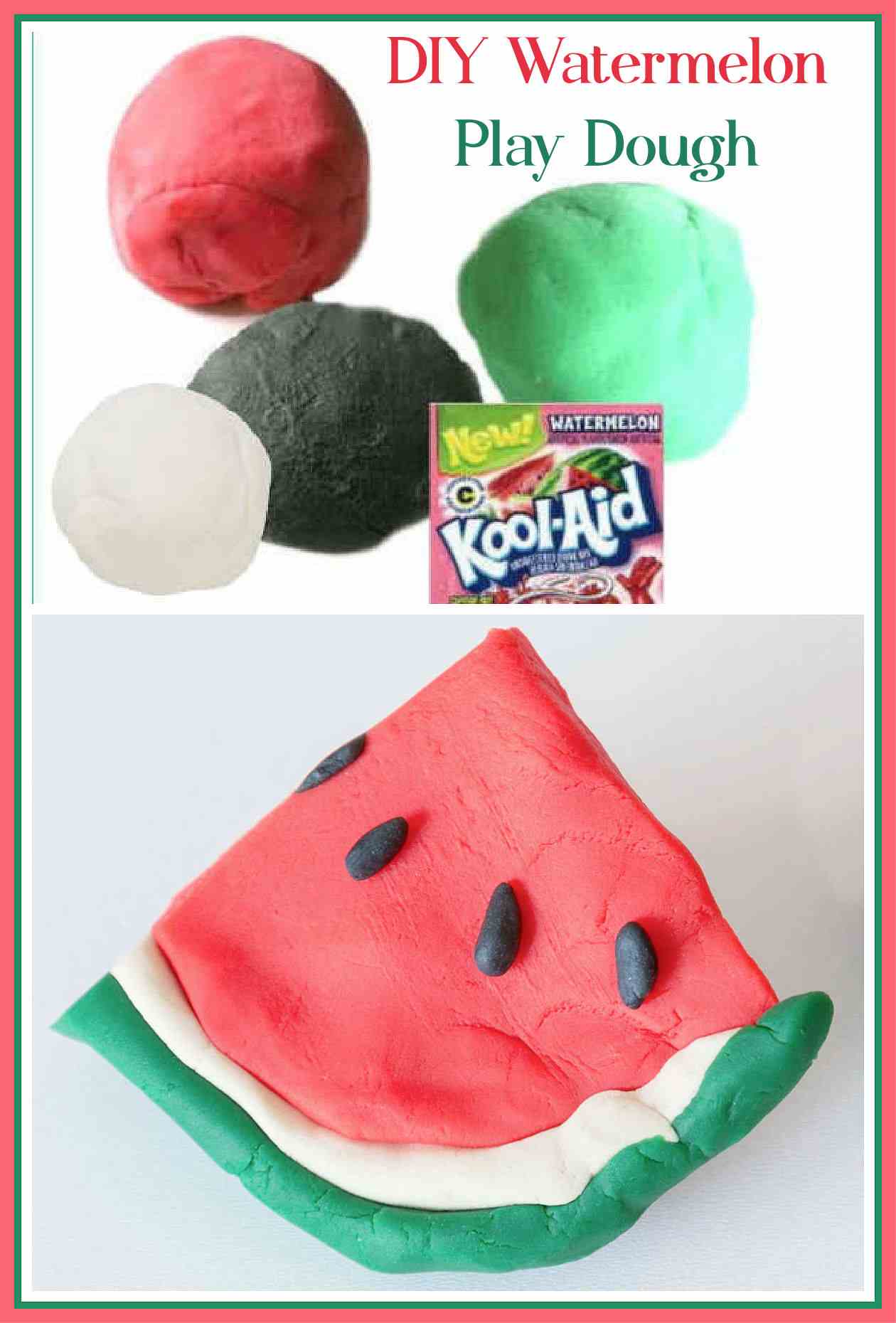 Admin note: this post for making playdough first appeared on the blog in April of 2013. I have updated the post to add all new photos, a printable project card and a video for you to enjoy.

Note: Keep this playdoh away from dogs and keep small children from eating it. Both will love the smell of it. It has a lot of salt, which can be harmful to the pups and lead to stomach upset in kids.