We had visitors from the UK recently and spent a day at the North Carolina Zoo, in Ashville, NC.

The zoo is divided into two parts – North America and African animals.  We spent our time at the African animal exhibits since we all wanted to see the large wild animals not on our continent.

One of my favorite parts of the day was the aviary.  I am not that much of a bird person, but the plants in the aviary were exotic and delightful to walk around and view.

As we were taking a break, a Victoria Crowned pigeon walked up to us and was soon joined by a friend… 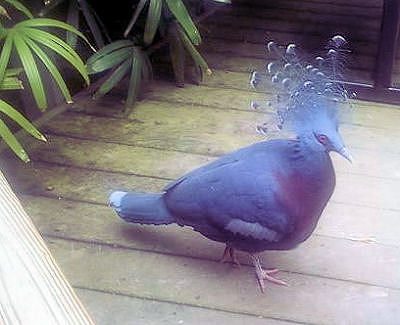 This species of pigeon is known as Goura victoria.  It is a large pigeon with a pretty bluish grey color that has elegant and very lacy crests on its head.

The pigeon is native to the New Guinea region.  The common name of the pigeon commemorates the British monarch, Queen Victoria. 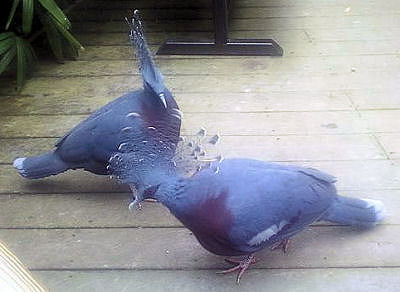 Crowned pigeons are the largest pigeons in the world.  The bird also has a deep maroon plumage and striking red eyes.  The bird is normally about 29 to 30 inches long and weights about 5 pounds or so.

Sadly, the bird has attracted widespread hunting.  The bird is quite tame and is easily shot. Most hunting is done for the plumes and also for the meat of the bird.

It is the most rarely occurring crowned pigeon in the wild, but it is often found in captivity.  Trapping to be kept alive is illegal but still commonly done. It is considered vulnerable,