With a name like Venice Beach Canals, one could be forgiven for thinking that they are visiting Italy. 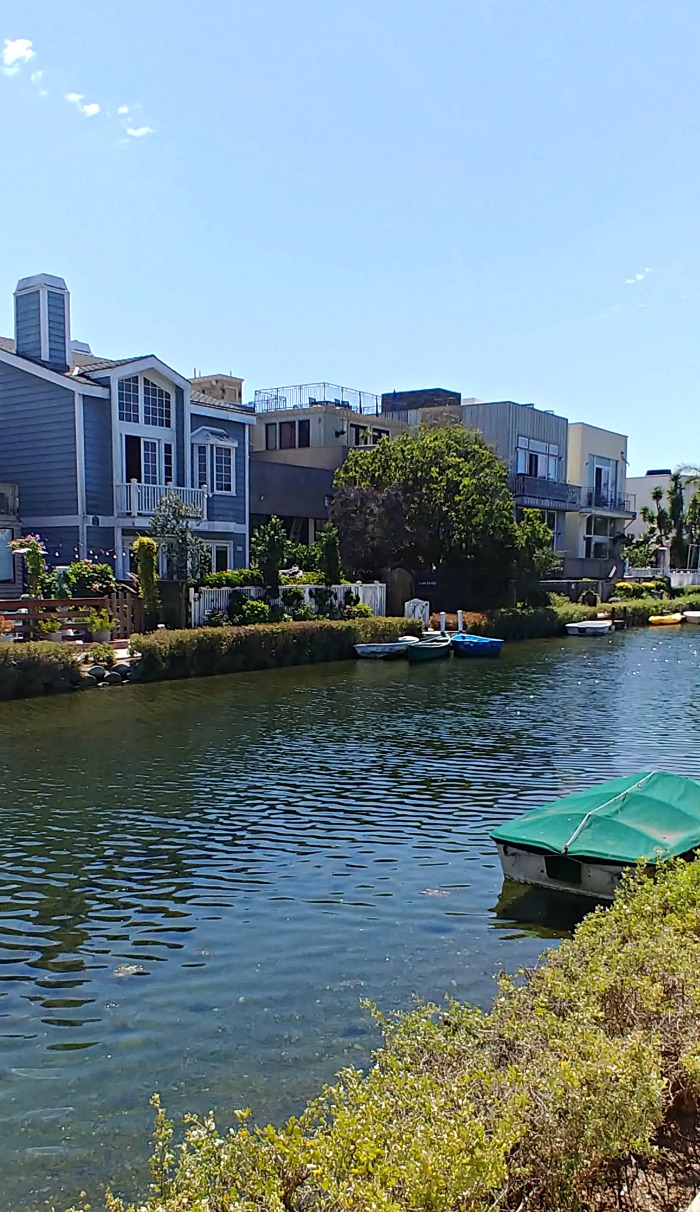 This series of man made canals with adjacent walkways give visitors to the area a chance to peek “up close and personal” into the lives of the people who live in this historic area.

If you are in the Southeast California area, be sure to also check out my list of things to do in Sequoia National Park, another wonderful California attraction.

For another post showing canals in a large city, be sure to check out my post on The Oklahoma City Riverwalk with the Land Run Monument. It is a fabulous spot to visit.

The Venice Canal District is located near the beach in the Venice section of Los Angeles. The canals were built in 1905 by developer Abbot Kinney and bring the feel of Venice, Italy to Southern California.

There are four east-west Canals:

At the end of each canal, the system intersects for a picturesque view in both directions. 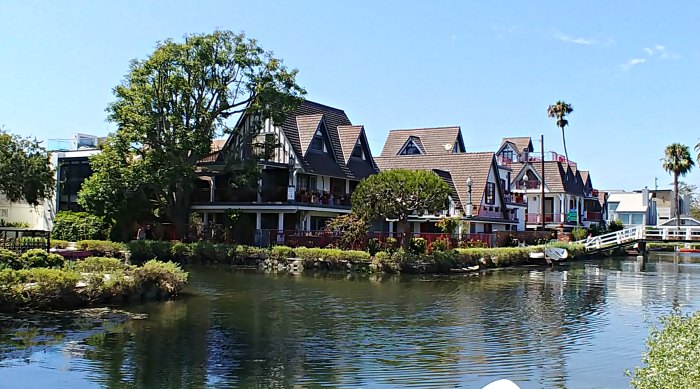 The canals have canoes, boats, and arched bridges which give them their unique look. They are a sought-after area of the city in which to live. 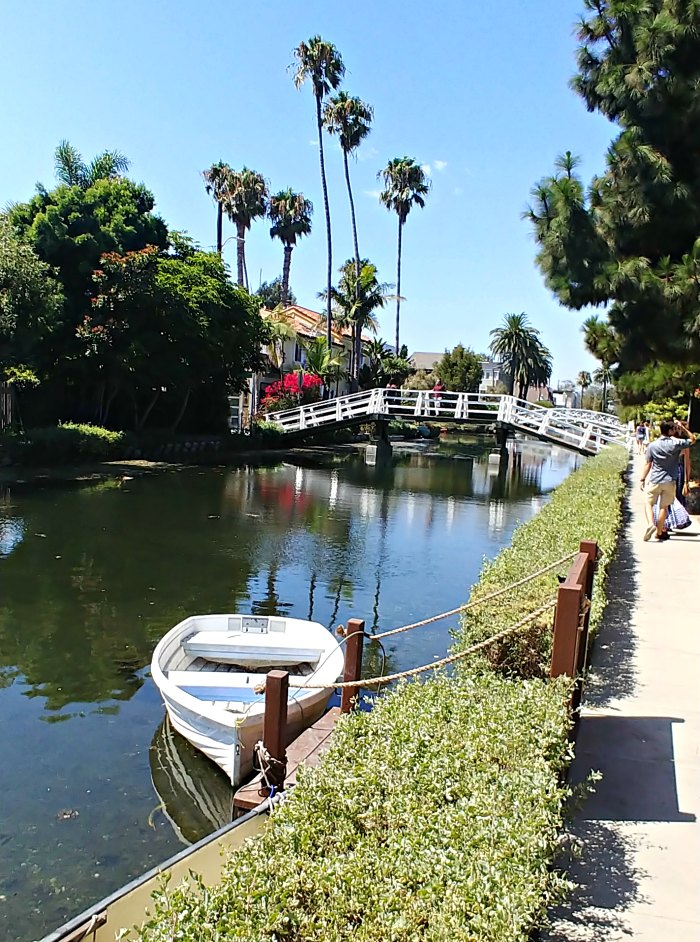 The residences surrounding the canals were listed on the National Register of Historic Places in 1982.

However, as in any desirable area of large cities, in recent years, there has been extensive renovation of the old houses and many large modern houses have been built.

The Venice Canals offer a completely different look at the beachfront neighborhood. The settings are idyllic with the occasional glimpse of wildlife. 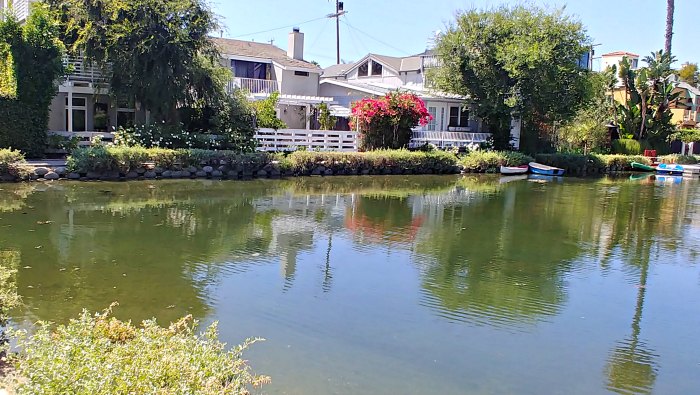 There are no boat rentals in the Venice Canal District, but you can bring along a non-motorized vessel to tour the neighborhood at water level in addition to strolling on the walkways.

Strolling down the Venice Canals

We spent several hours strolling down the Venice Canal walkway areas of each of the canals.

Each canal is different and the look and feel of it was determined not only by the type of architecture in the residences but by the type of gardens that the owners chose to plant.

Since each house fronts on to the water directly, it is no wonder that the front of each resident had a patio, atrium, sunroom or large deck to enjoy their view. 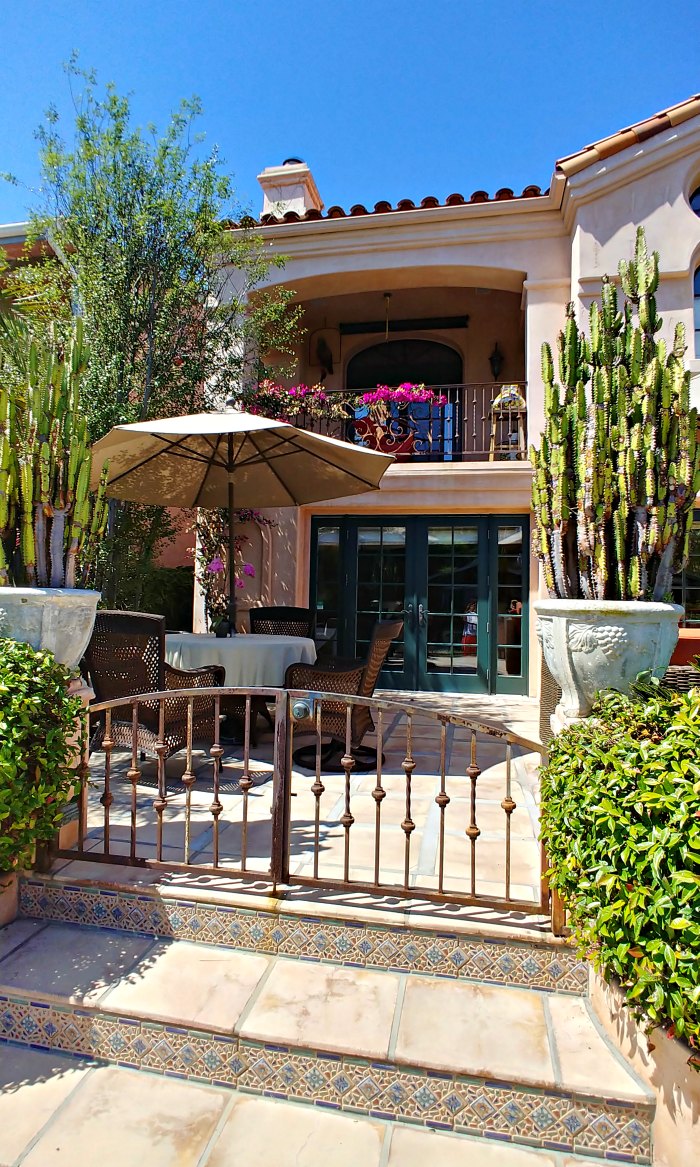 Some of the homes along the Venice canals were the old style, smaller residences (many of these are available for lease) and others are the McMansions so prominent in other wealthy neighborhoods. 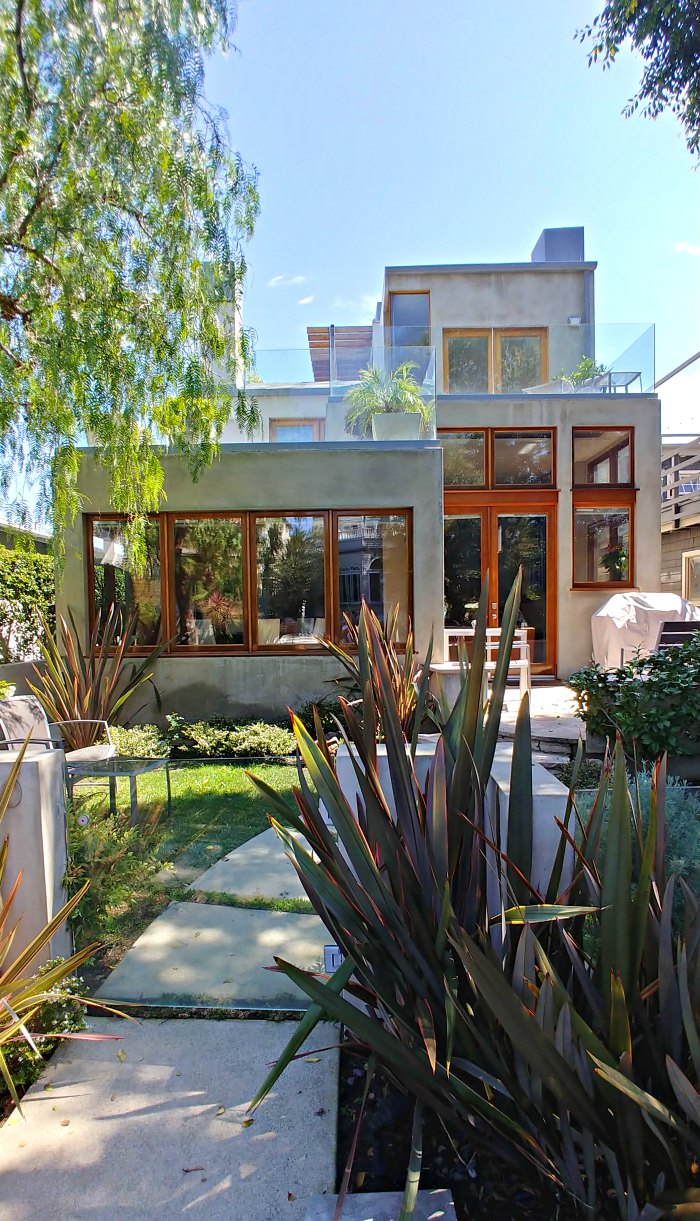 Succulent gardens were a common feature for landscaping but they were by no means the only type.

Most of the home owners had planted gardens that were somewhat drought tolerant, since water is in short supply in LA.

Many home owners used succulents as part of their privacy walls, which was a delight for those passing by. 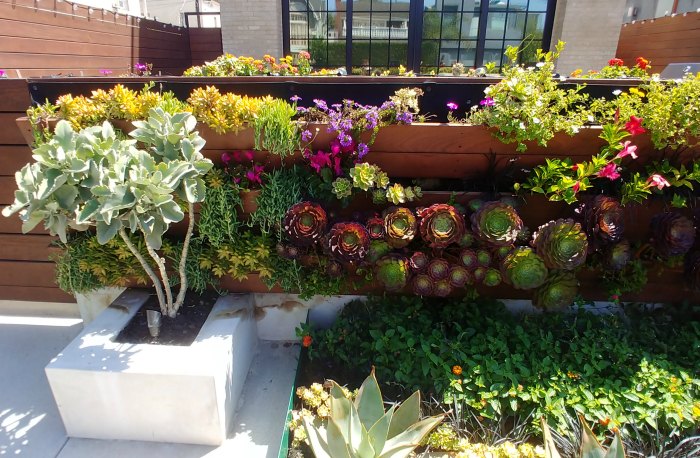 The odd patch of grass seemed out of place in the midst of other more “footprint conscious” Los Angeles homes.

If you are in the LA area and have a few hours to spare be sure to drop by this area of the city and take a stroll down the Venice canals.

Parking is non-existent at the areas of the Venice Beach canals. You will need to make use of nearby neighborhood parking (common in LA) but it is worth the extra time finding a spot. 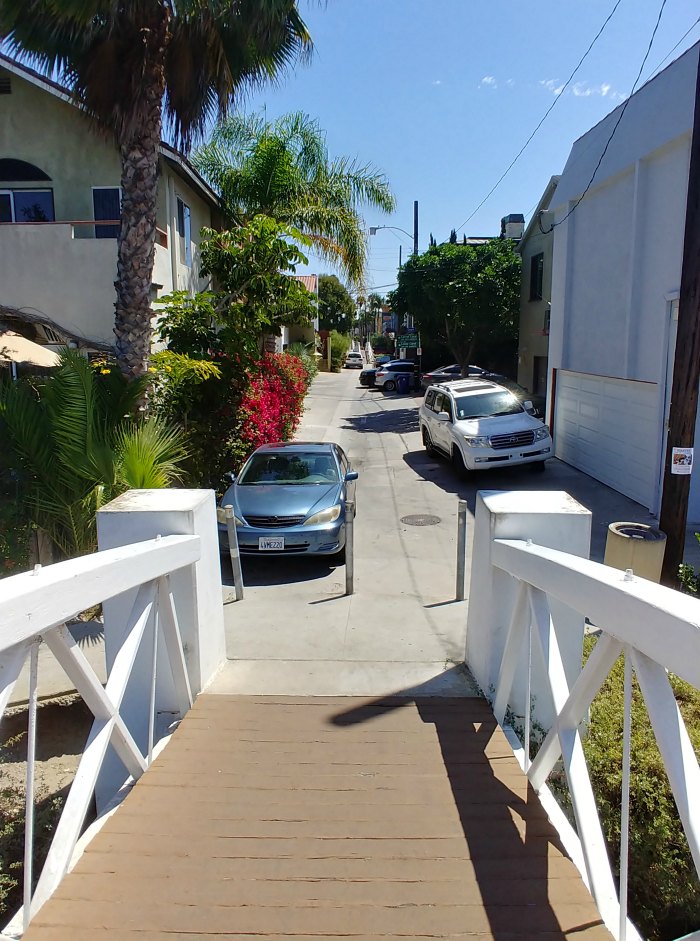 This was truly one of my favorite days on a recent trip to LA and I advise everyone interested in historic residences and gardens to add it to their bucket list of thing to do in LA.

Would you like to see more photos of this Historic area?  Be sure to click through to see the Venice Canals Photo Gallery for more exciting views.

Where is Venice Beach?

Venice Beach is a coastal spot in Los Angeles, California near Marina Del Ray. In addition to the Venice Beach Canals, the location is also known for the Venice Beach boardwalk where you can people watch, be entertained and shop.

Have you visited the Venice Beach Canals Historic District?  Please leave your impressions of the district in the comments below.

If you enjoy scenic areas with magnificent gardens, be sure to also check out these posts:

Pin this post about the Venice Historic District for Later

Would you like a reminder of this post?  Just pin this image to one of your places to visit boards on Pinterest so that you can easily find it later. 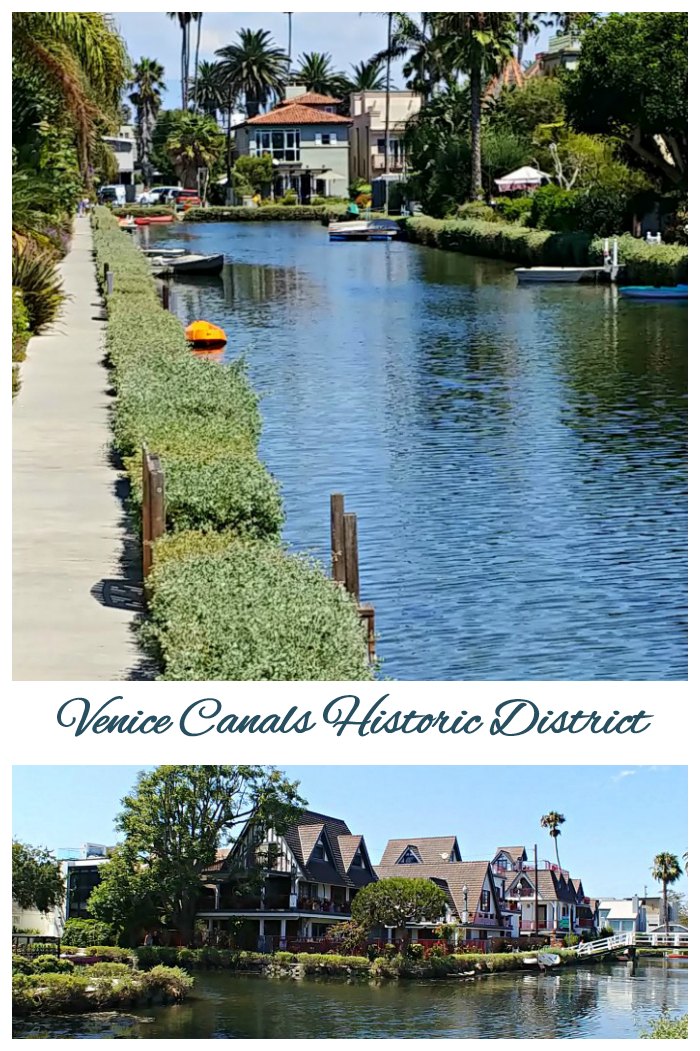 Hello, I enjoyed reading you’re article with it’s beautiful pictures and interesting history! Would definitely love to visit! Thank you!

Very interesting article thanks for sharing. I really appreciate your efforts.

Really amazing and most beautiful pictures in this post