The gardens are booming right now and many of my readers ask “why are my cucumbers turning yellow, round and deformed?”

Cucumbers are a popular warm season vegetable. Many beginning gardeners choose them since they are normally fairly easy to grow. Cucumbers are easy to plant, taste great, and will give you a big harvest.

However, when you go out the to garden to harvest from the plant and find little round yellow balls instead of long slender green cucumbers, you will wonder if your green thumb has turned brown!

First you will wonder why it’s happening, and then you’ll likely also ask “can you eat yellow cucumbers – is it safe?”

My husband built me a series of raised garden beds this year, and I planted both pickling cucumbers and normal cucumbers. I thought the new bed would be the answer to a problem I have had for years – cucumbers turning yellow. 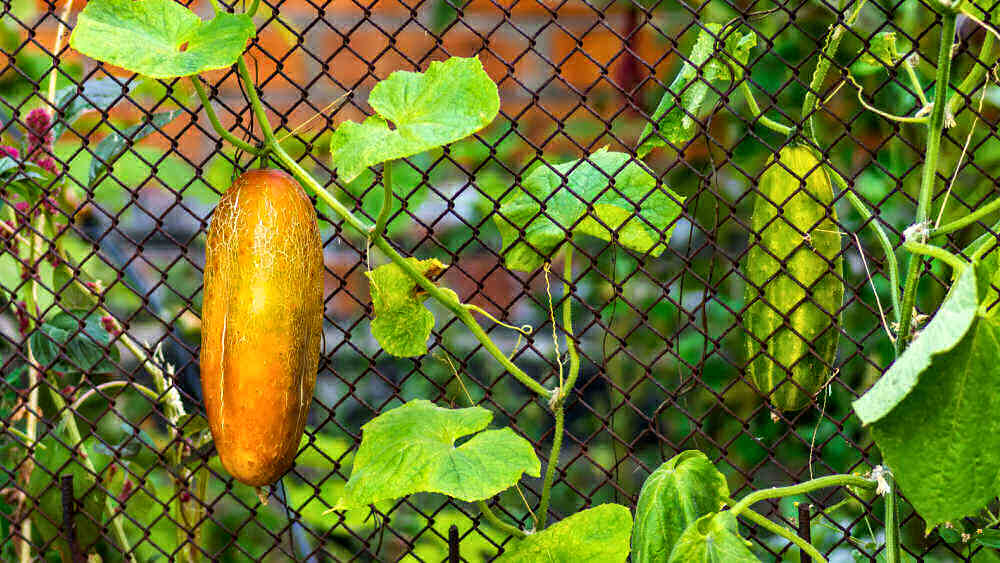 It is not just the color that I have had a problem with concerning cucumbers. The shape was also an issue. In the past, I’ve ended up with little round balls that are bright yellow, or those that are slightly yellowed but stubby and deformed on the end.

I thought the problem might be that the containers where I grew them were too small. All my new raised garden beds are large and deep, so I thought this would help with watering.

The cucumbers are growing now – they are yellow, round and deformed with stubby tips. The discouragement is not fun! Time for me to figure out why!

It's time to harvest those cucumbers! Are yours turning yellow? Find out the reasons why on The Gardening Cook. #yellowcucumbers #gardenproblems 🥒🥒🥒 Click To Tweet

Cucumbers are also known as cucumis sativus and they belong to the cucurbitaceae family (cucurbits). 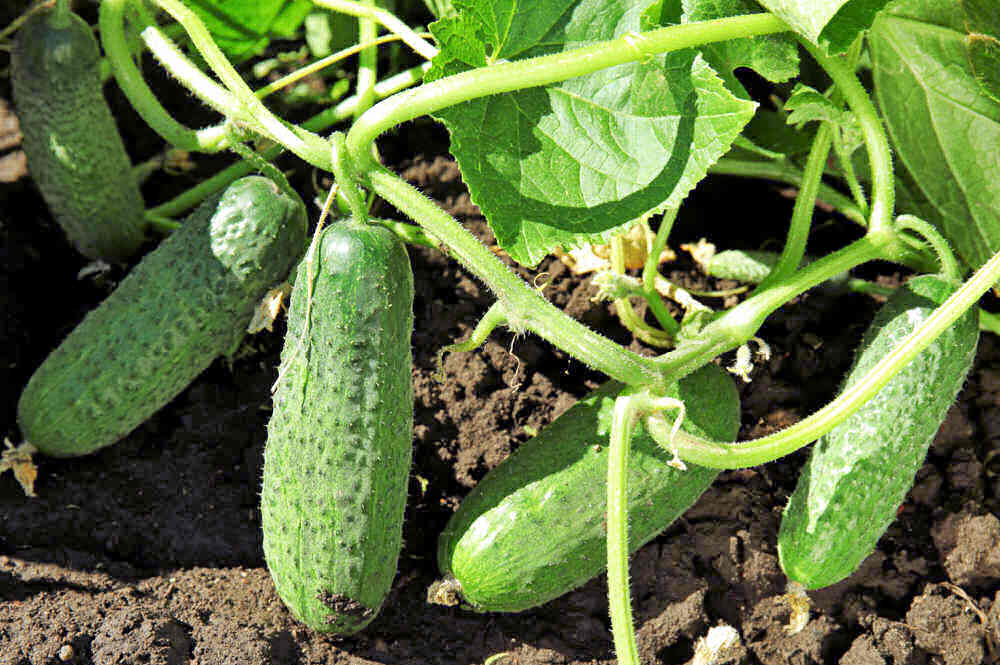 Other garden plants in the family are melons, pumpkins and squash.

Oddly enough, cucumbers are considered a fruit. They are classified this way because they contain tiny seeds in the middle and grow from the flower of the cucumber plant.

Cucumbers are a vining plant and need a lot of room to grow. Growing cucumbers vertically is one way to maximize space if you have a small garden.

One of the common cucumber growing problems is ending up with yellow cucumbers. Let’s find out the reasons why this happens.

Why do cucumbers turn yellow?

There are many reasons for cucumbers turning yellow. Waiting to harvest too long, overwatering, and lack of pollination could be the causes. Viral diseases could also be at play.

Also, gardeners take note: some cucumbers are supposed to be yellow! Check your label to see if you are growing a yellow cucumber variety such as “Yellow Submarine, Lemon Yellow and Salt and Pepper.

These cucumber varieties naturally produce yellow fruit that is perfectly fine to eat and never bitter.

One of the most common reasons for cucumbers turning yellow is that you have waited too long to harvest them. As cucumbers mature, their deep color begins to fade, revealing a yellow or even an orange color.

These cucumbers are normal shaped but often very large. They’ve just been growing too long. 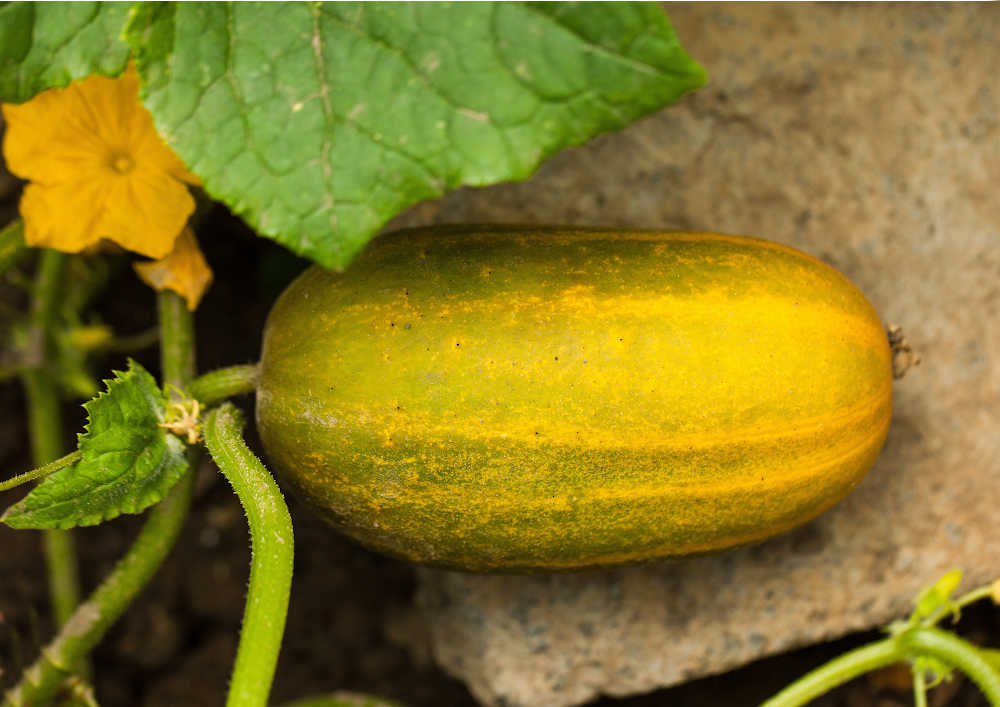 Cucumbers that have been growing on the vine too long taste bitter.

The easy fix for this is to harvest them sooner. Once the female cucumber flowers have been pollinated, check to see how they are growing each day. Most will be ready to harvest about 10 days after pollination.

Depending on your variety, cucumbers are ready to harvest 50 to 70 days from planting. Ripe cucumbers are bright medium green to dark green and firm.

If you give your cucumber plants too much water, it will remove essential minerals from the soil, such as calcium and nitrogen.

In this happens, the cucumbers will turn yellow early, long before one would normally harvest them. 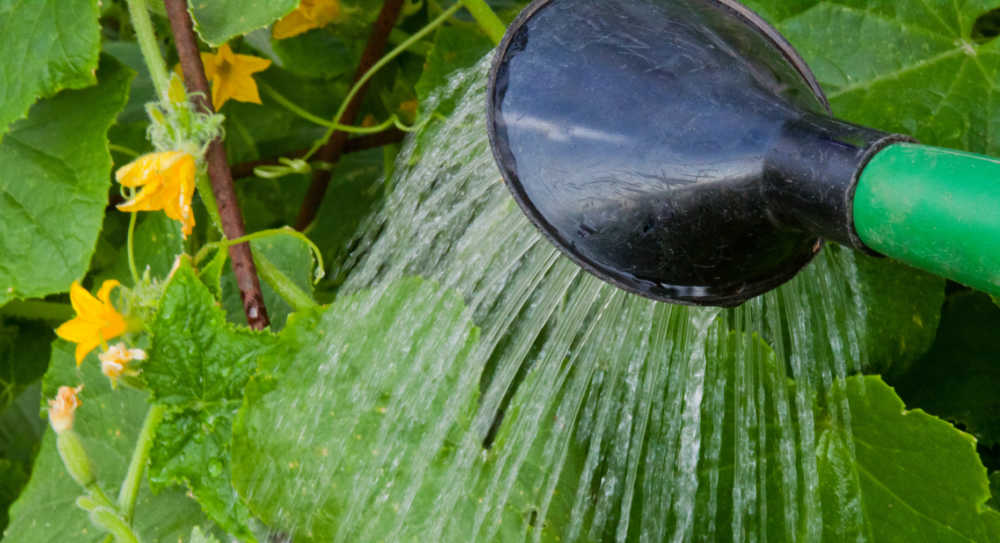 Holding off on the water is the answer to this cause. Cucumbers need just 2 inches of water a week in the hottest weather and 1 inch in normal temperatures.

Cucumber plants have a shallow root system that loves moisture but don’t leave them with wet feet. This causes them to turn yellow.

For best results water deeply and slowly a couple of times a week. More than this and you’re robbing the soil of nutrients.

A very rainy season often leads to a disappointing crop for this reason.

Cucumbers need the right mix of nutrients to grow well. A lack of fertilizing can cause both the leaves and fruit of cucumbers to turn yellow. Improperly fertilized cucumbers will stay small rather than reaching a proper size and will often turn yellow. 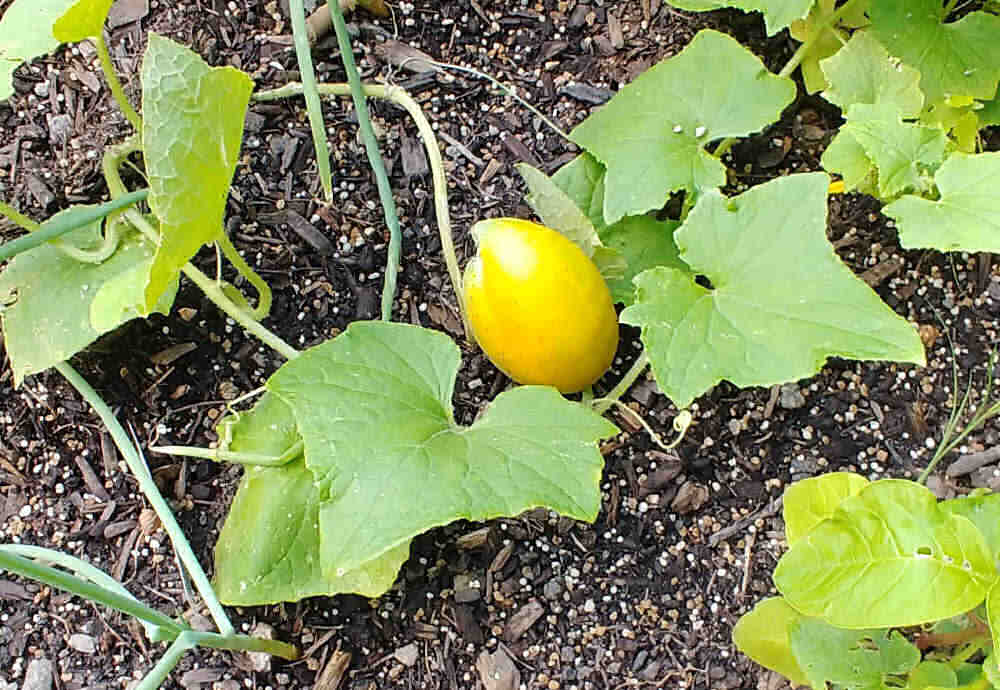 To prevent this, use a balanced fertilizer at planting time, or add compost or other organic matter to the soil. Fertilize again after bloom and then about once a month during the growing season.

Crop rotation is an important part of preventing yellow cucumbers. If you grow your plants in the same place in the garden each year, it will result in the soil being depleted of the nutrients necessary to grow healthy cucumbers.

This is not just true for cucumbers but for all garden vegetables. Switch it up!

Lack of pollination causes deformed cucumbers that are sometimes yellow

Unfortunately, a lack of pollination is a common cause of deformed, yellow cucumbers. If your plant sets a fruit which has and end that is smaller than the rests of the cucumber, poor pollination is likely a cause. 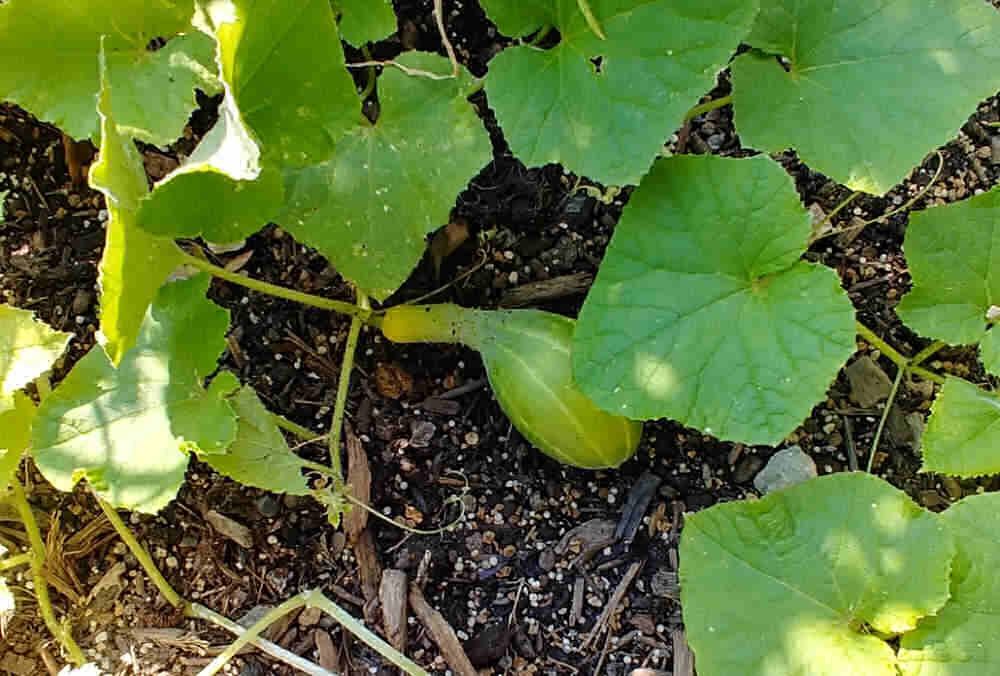 In order for proper pollination to occur, each flower must be pollinated many times for the fruit to form fully. The more pollination from honeybees you have, the more cucumbers of the right shape and color you’ll have!

In the case of deformed and yellow cucumbers, pollination has occurred, since there is visible fruit, but the lack of enough pollination causes the deformed fruit. High temperatures can also kill the pollen and cause this problem.

High temperatures also affect tomatoes which won’t turn red. Find out why this happens and some tips for ripening tomatoes on the vine.

One way to encourage pollination is not to use pesticides in the vegetable garden. Even organic pesticides can deter honey bees.

Another way to attract the pollinators is to plant lots of flowering herbs and annuals. Zinnias, black eyed Susans and sunflowers are good choices, as well as dill and basil, which also flower well.

If you are the ambitious gardener who doesn’t have enough pollination from insects you can pollinate the cucumber plants yourself. 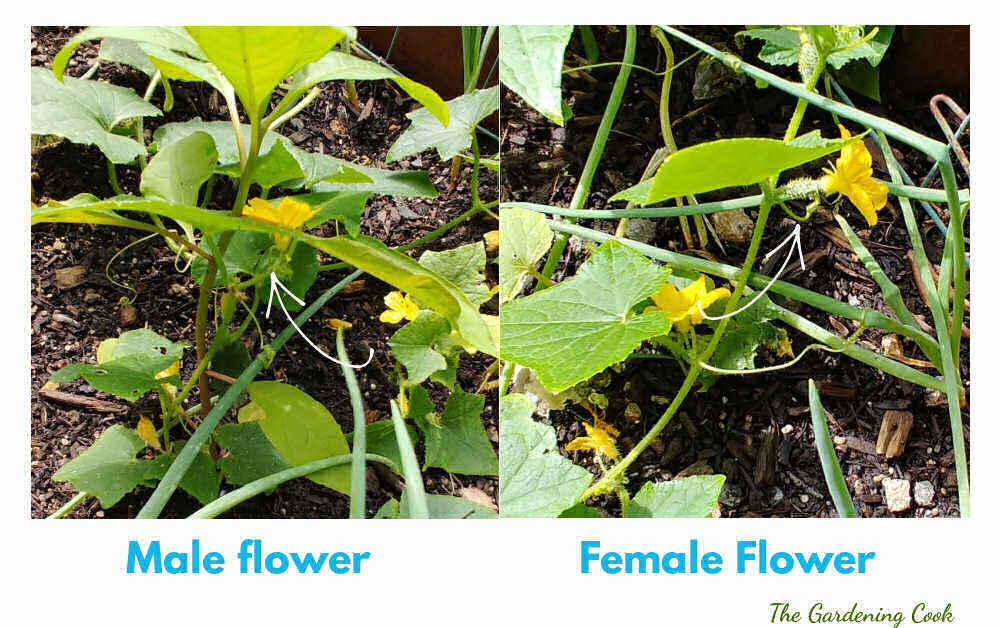 You can recognize the male flowers because they have no tiny fruit behind them. The female flower has a small fruit behind it even before the flower opens.

This virus creates a mottled appearance on cucumber leaves which become distorted. 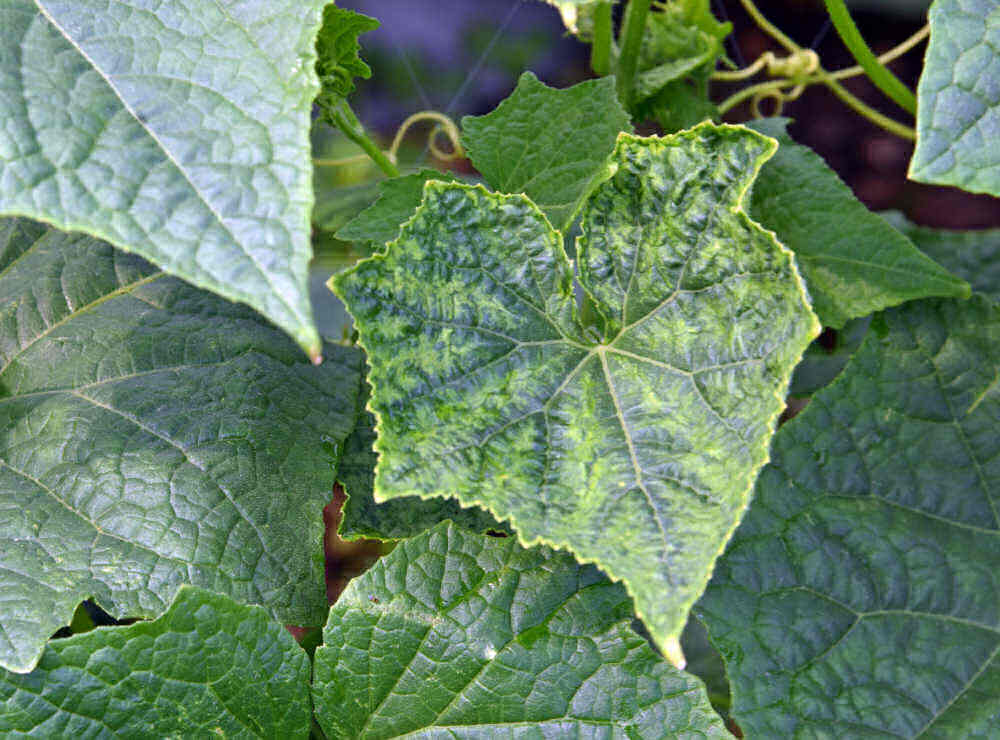 Leaves that are distorted by the virus cannot function as those on a normal plant, so the plants struggle to grow and stop gaining size. This can give you small, stunted cucumbers with white or yellow mottling.

Preventing this disease is not as easy as simply holding off on watering, or harvesting sooner.

Row covers at planting time will help to keep the aphids and cucumber beetles that transmit the virus from the plant. Remove and destroy any plants that show signs of the virus.

This virus attacks a wide variety of plants, such as gloriosa lily, not just the fruiting type. It can even infest weeds.

I also find that cucumber plants which grow vertically on a trellis or garden obelisk, seem to have less problems with this fungus.

Can you eat yellow cucumbers?

The short answer is yes, they are safe, but you likely won’t want to eat them because of the taste.

Too ripe cucumbers that have been growing longer than they should will be bitter and not enjoyable to eat.

There are some ways to eat them, though. Cucumber relish is a good use of yellow cucumbers, since the bitter tastes is masked by the pickling ingredients. I have included a recipe at the bottom of the post. 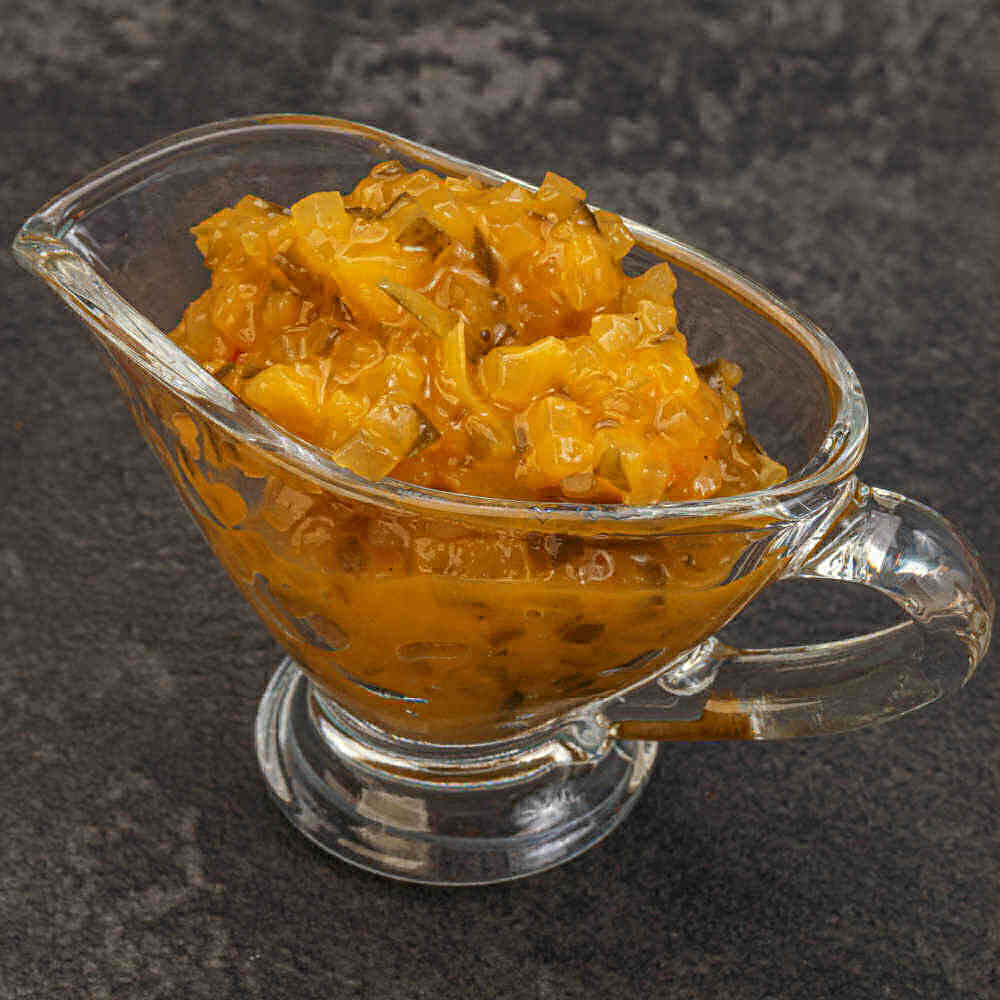 While you may not want to eat these cucumbers, you can recycle them! As long as they are not diseased, add them to your compost pile. They are an excellent source of nitrogen.

Yellow cucumbers caused by the cucumber mosaic virus will also be bitter. Destroy these, instead of adding them to your compost pile.

A note on yellow cucumber seeds

Fat yellow cucumbers that taste bitter will have a lot of seeds in the inside when you cut them lengthwise. 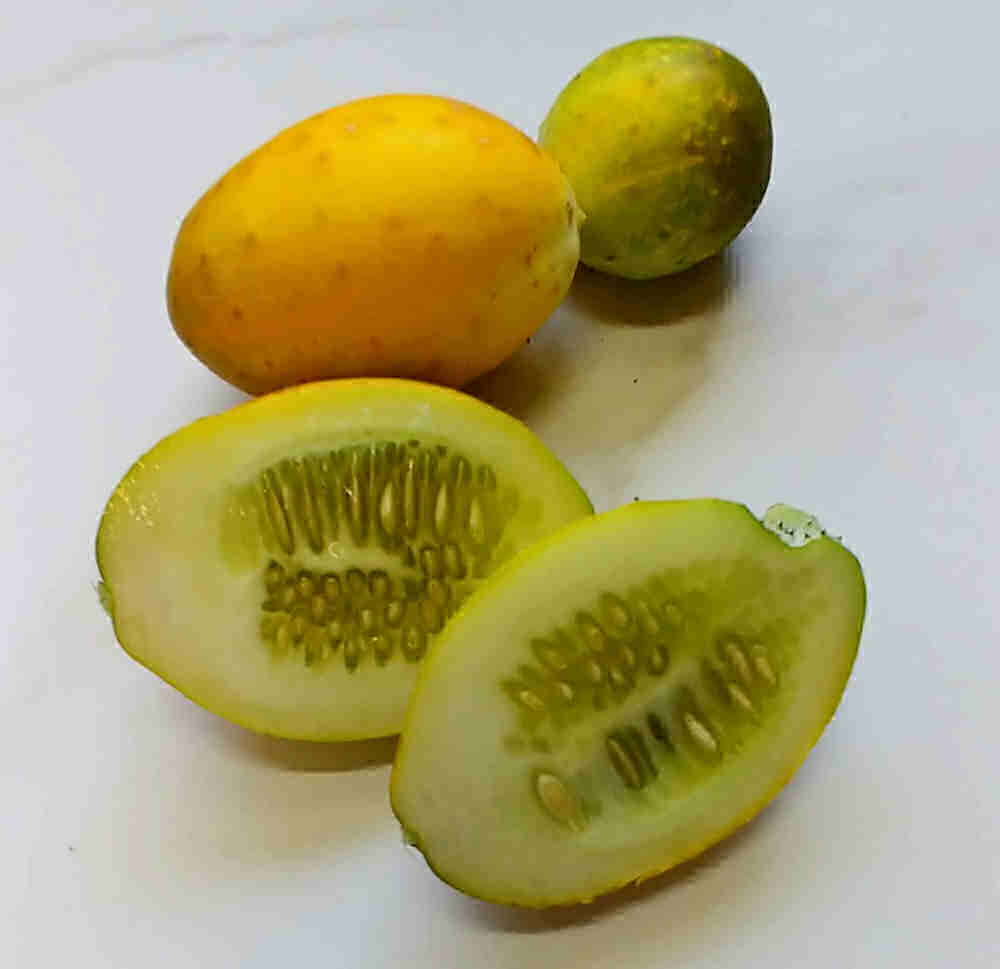 The seeds of yellow cucumbers are considered botanically mature. Even though the cucumber is over ripe in many cases, the seeds have developed fully and will germinate.

Saving the seeds for next years crops is a good idea and a great use of overripe cucumbers.

Would you like a reminder of this post for why cucumbers turn yellow? Just pin this image to one of your gardening boards on Pinterest so that you can easily find it later. 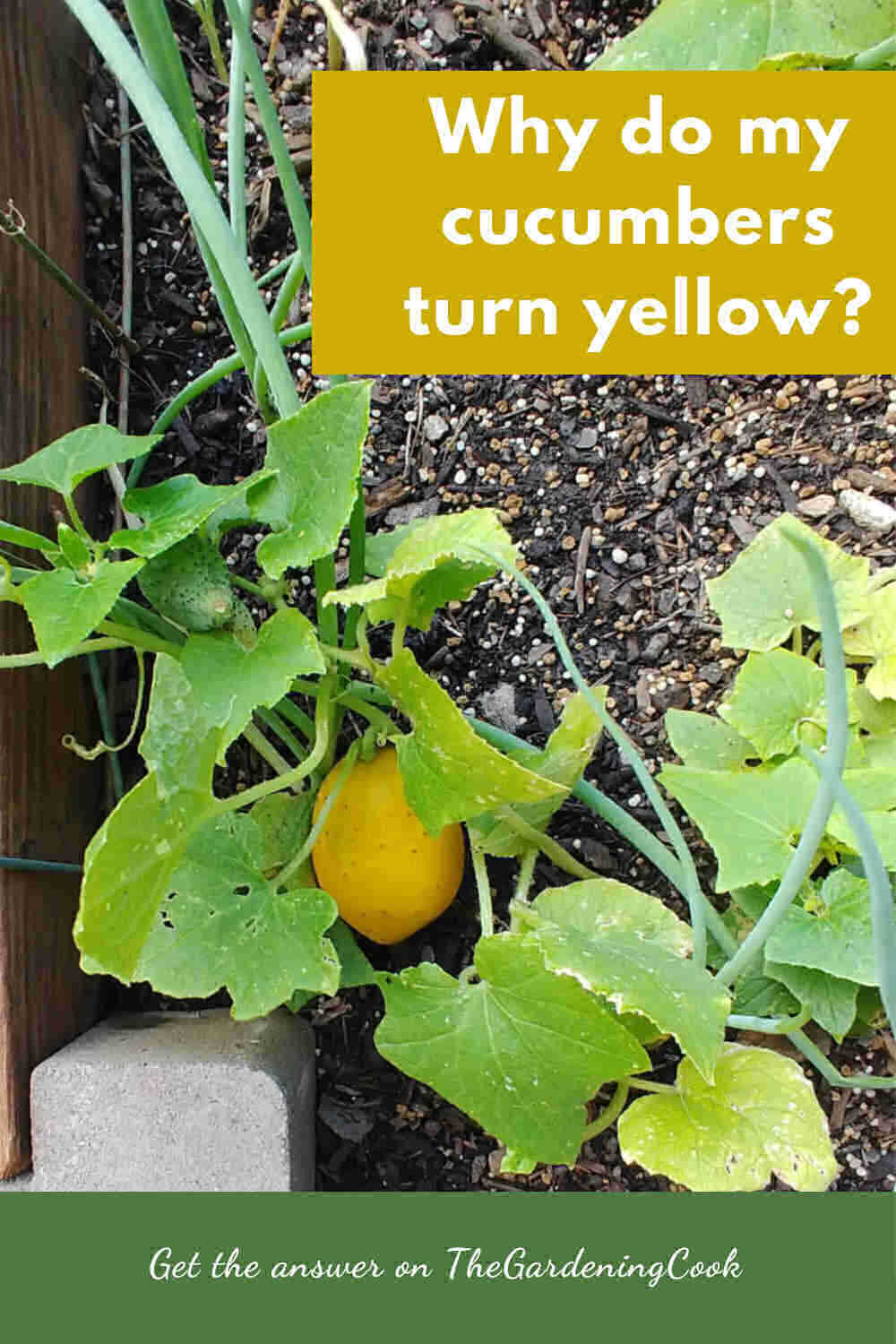 Admin note: this post for yellow cucumbers first appeared on the blog in May of 2013. I have updated the post to add more information, all new photos, a printable recipe card for cucumber relish and a video for you to enjoy.

A food processor is a good way to chop the cucumbers, peppers and onions to get the consistency you want.

If you don't want to process the relish in a water bath, store the jars in the refrigerator when they have cooled and use within 2 weeks. This makes a nice gift for a gardener, too.

Approximately how many pounds when you say 10 pickling cukes? We went away and came back to orange cukes.... Could you make bread and butter with these too?

Could the sugar be left out or substituted for Stevia?

Hi Lindsey. The sugar is used since yellow cucumbers are often bitter and it offsets that. I have not tried it with Stevia so I don't know how it will turn out if that is used.