If you are in the Southeast California area, be sure to add this list of things to do in Sequoia National Park to your must-see attractions.

Sequoia National Park is home to giant sequoia trees, and along with King’s Canyon National Park, is a vast designated wilderness comprising over 800,000 acres.

The drive through Sequoia National Park is magnificent. Everywhere you look there is a scenic vista of elongated spires with a backdrop of spectacular mountain ridges.

Outcroppings of marble and granite provide a welcome break from the alpine scenery. One of particular interest is a naturally shaped bridge over the road. 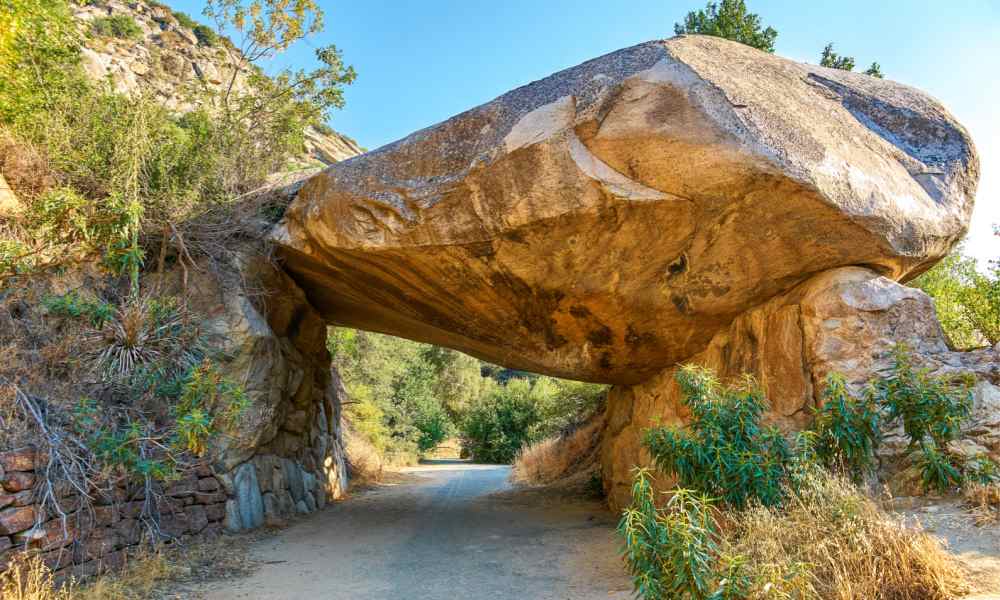 Are you visiting the Southeast area of California soon? Find out what you can do in Sequoia National Park in just one day! #sequoianationalpark #kingscanyonnationalpark Click To Tweet

I recommend that you start your visit to Sequoia National Park from CA route 198 which leads to General’s Highway.

This entry point allows you to experience the ever increasing size of plants, shrubs and finally trees as the highway leads you to the giant sequoias. 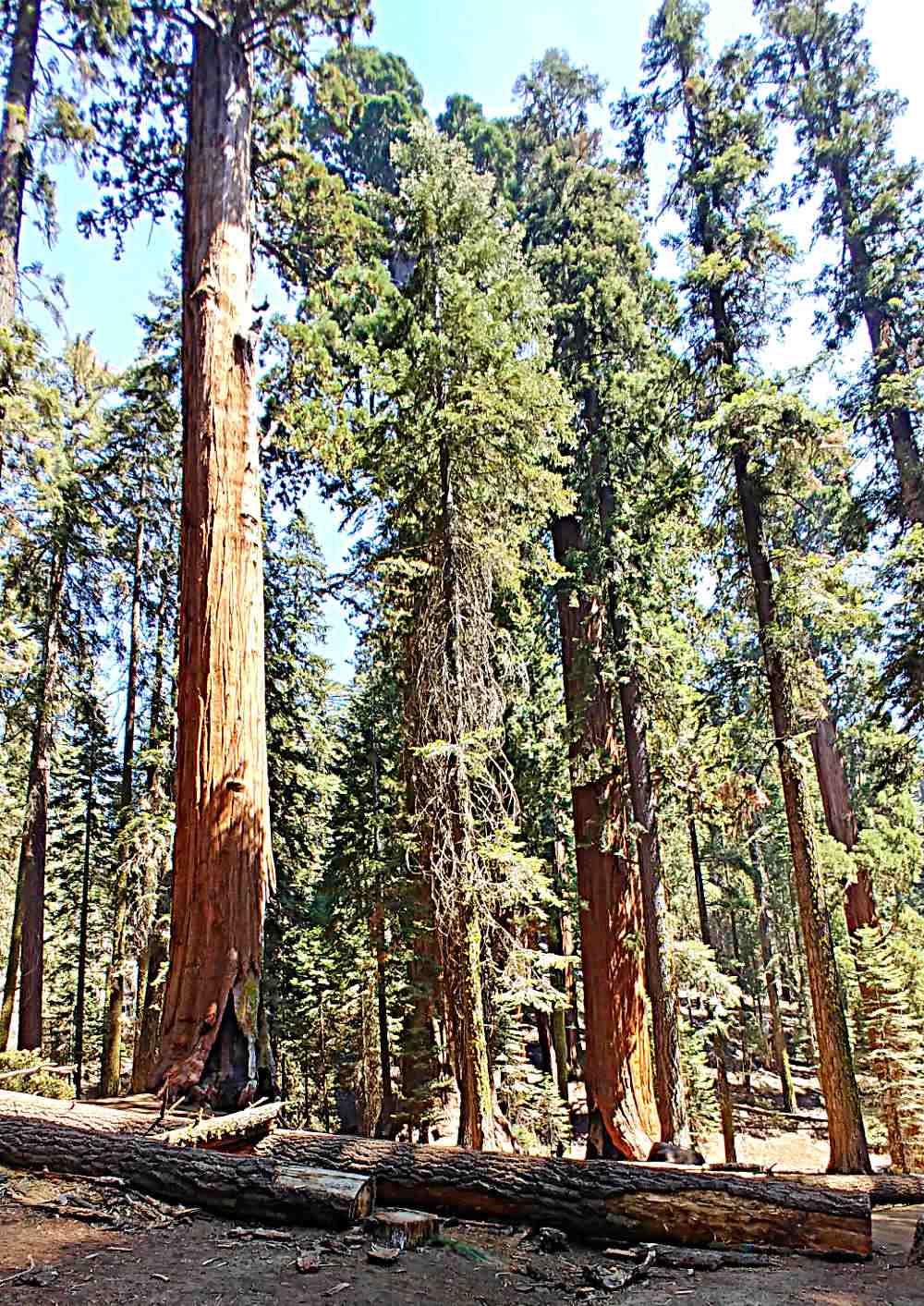 The road is twisty and turns often with multiple outlook points to give you a good look at the stunning vistas.

There are several points of interest along the drive that are worth a stop for photos and just pure enjoyment of the scenery.

Even in the early days, conservationists realized that the sequoias needed protecting. It was established as a permanent refuge for sequoias in 1890 by Congress. 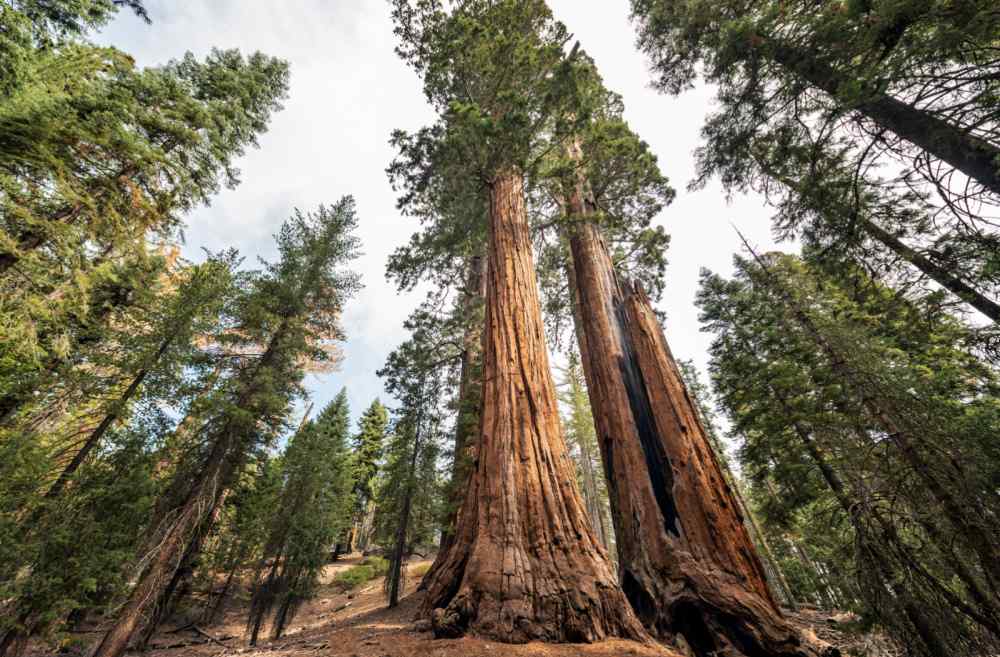 Over the years, new threats to the area have surfaced, such as environmental issues, climate change and less precipitation, as well as invasive species.

Beetle attacks and fires are taking their toll as well. The 2020 Castle Fire killed thousands of mature sequoias.

Things to do in Sequoia National Park

While the drive through Sequoia National Park is beautiful on its own, there are several things to do in Sequoia Park that you won’t want to miss.

In the center of the park, at the head of Moro Creek, is Moro Rock. It is located between the Giant Forest and Crescent Meadow.

Moro Rock is a giant granite dome rock formation which reminds me of an old gray man. It is visible in several vistas as the road snakes around the mountain range. 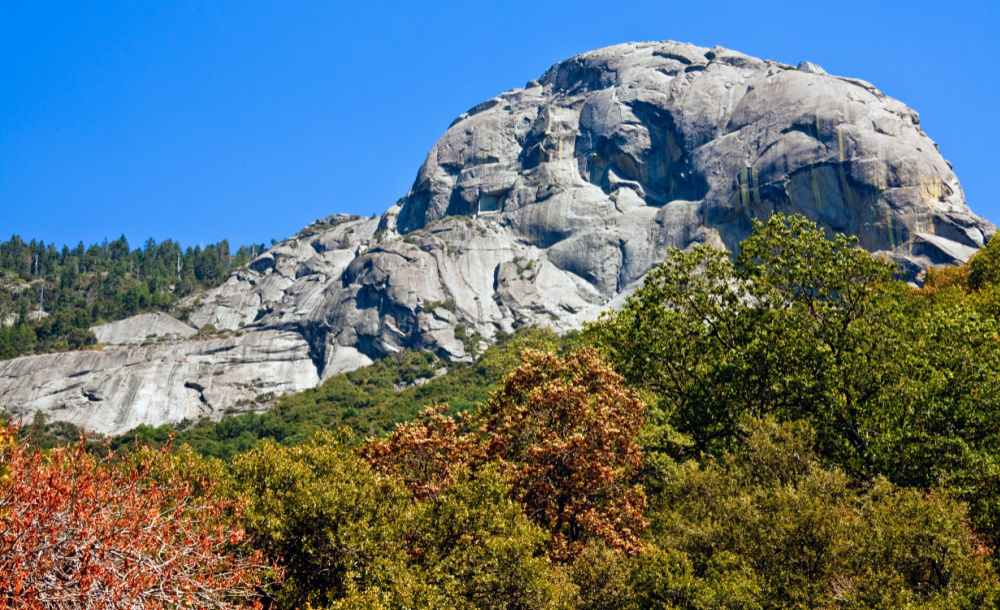 A 3 mile dead-end road which starts at Grant Forest Museum takes you to Moro Rock. Expect congestion on this road. You can view surrounding vistas from the top of Moro Rock.

At the top of any list of things to do in Sequoia National Park is Big Trees Trail, along with other groves where the sequoias are so visible.

The best places to get up close and personal to the big trees are Giant Forest, Grant Grove, and Redwood Mountain Grove.

As you progress along the drive, it becomes obvious when you get near to the area known as Big Trees Trail. The mixed conifer and pines start getting intermingled with the lovely color of the huge sequoias. 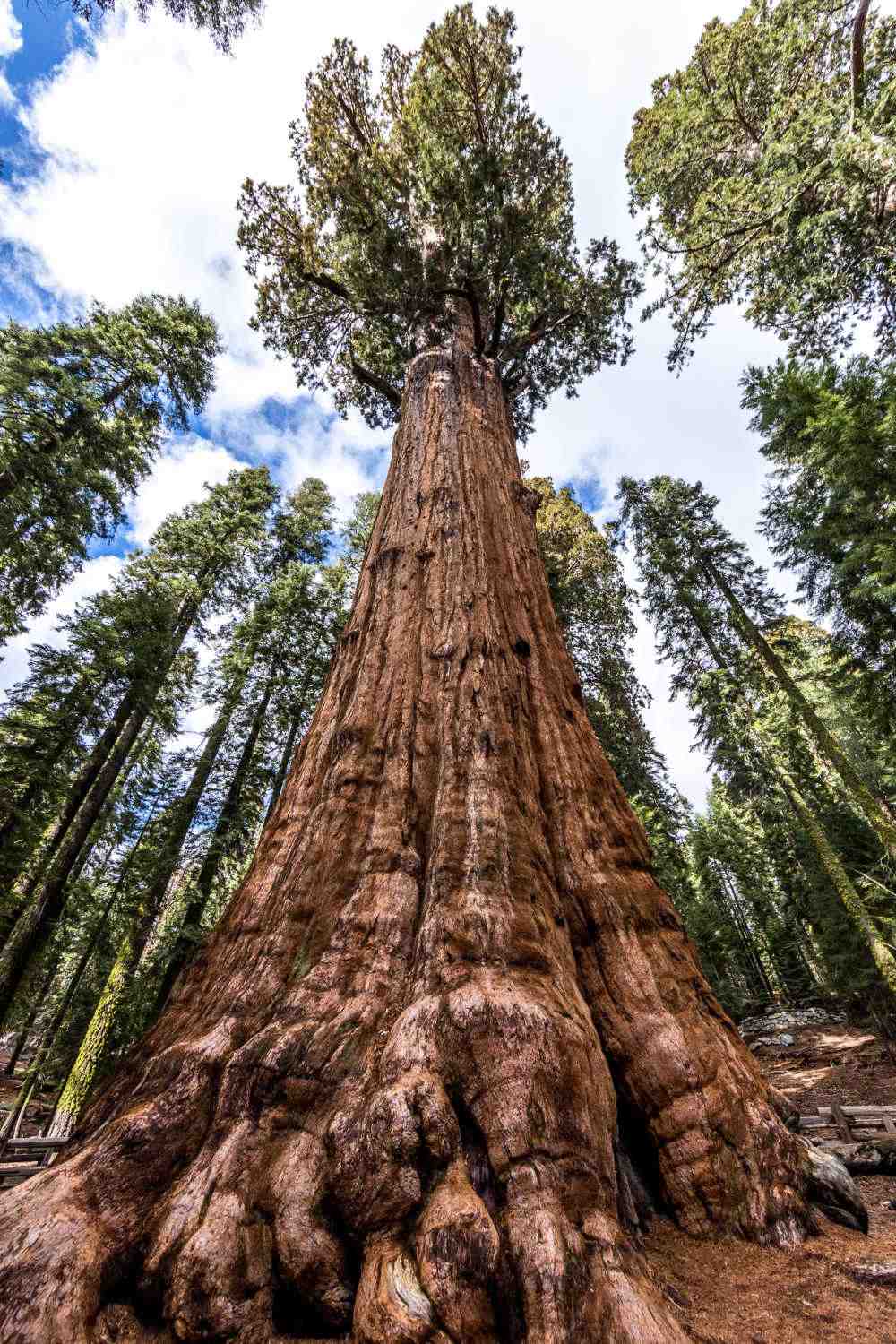 There is a 1/2 mile walking trail that leads visitors down towards the General Sherman Tree. The trail has a steep decline which winds often and ends at a very large and old sequoia tree as well as many other beautiful sequoias.

The climb back is more difficult but there are several substantial benches for you to stop and catch your breath. 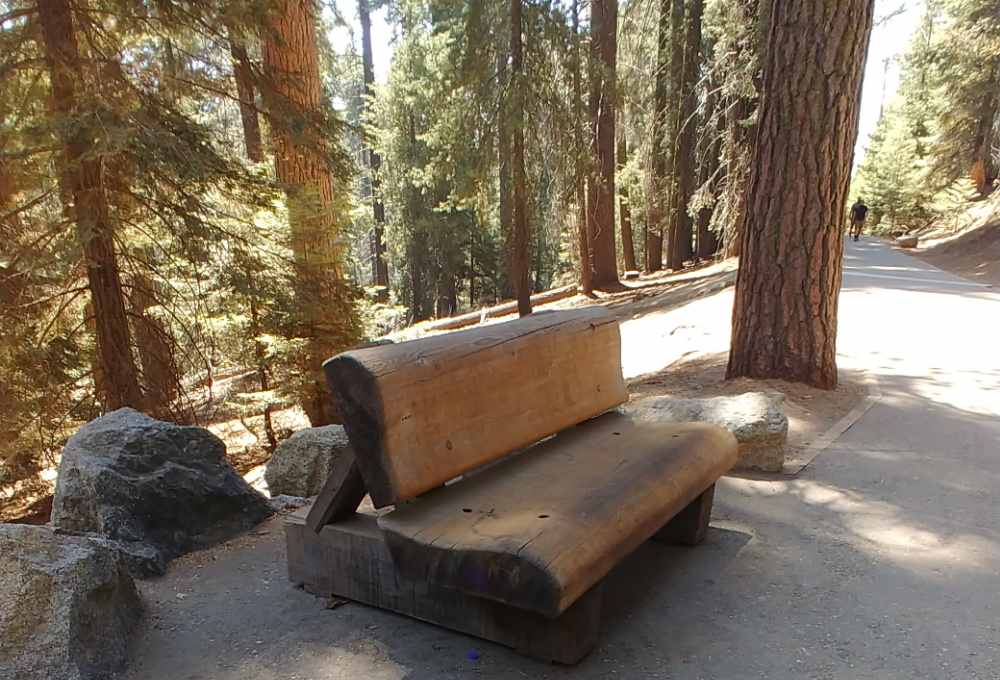 If you are handicapped or find walking difficult, a shuttle bus is available to take you to the area.

General Sherman Tree is notable because it has the widest girth and volume of timber. It is the world’s largest tree, at 275 feet. 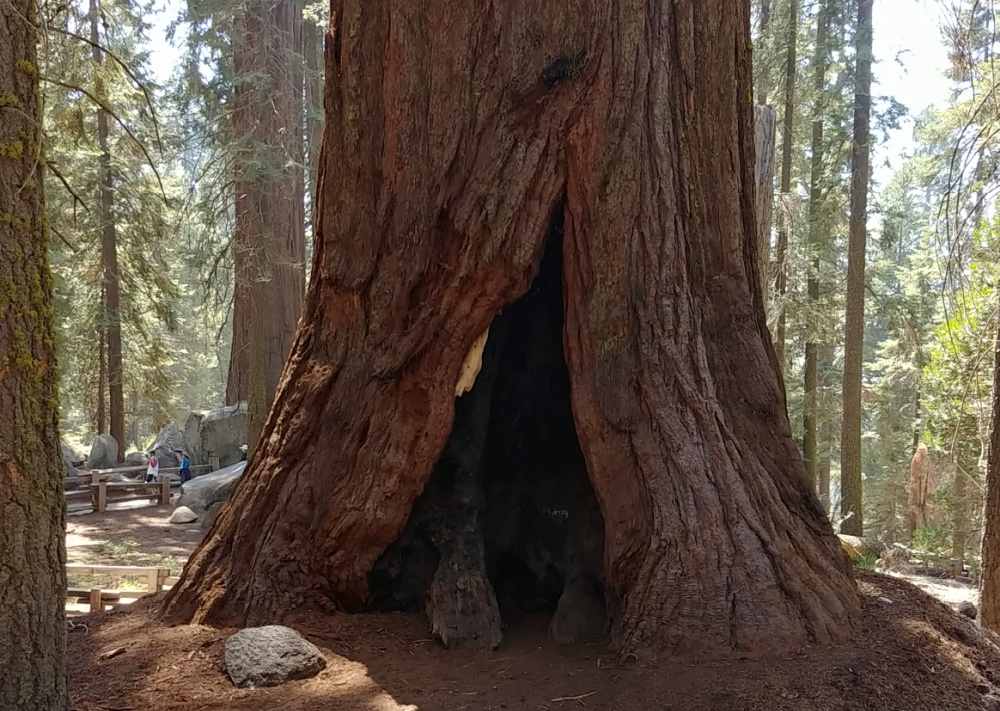 The tree is estimated to have a volume of 52,500 cubic feet! 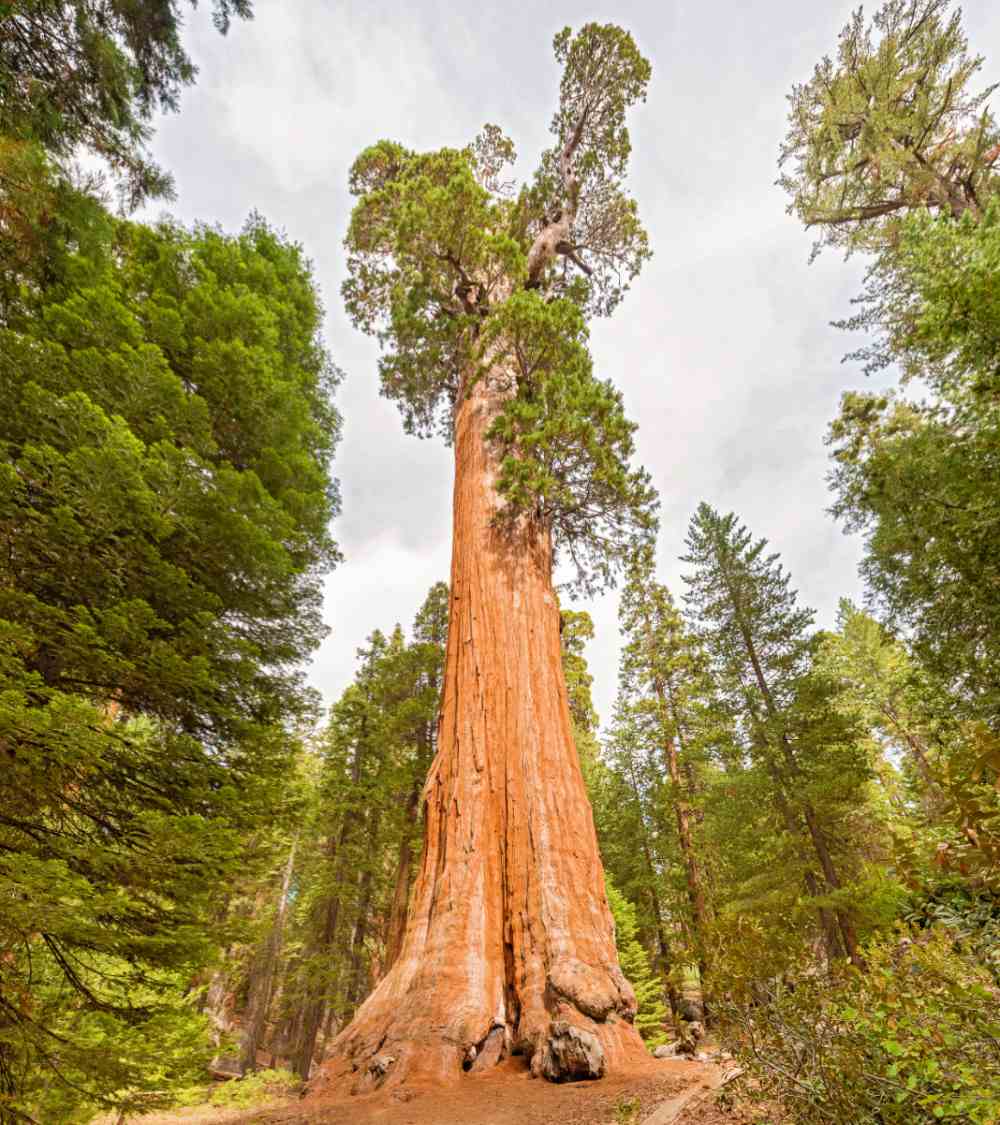 The tree stands 267 feet tall and is nearly 29 feet wide at the base. It is a 3000 year old tree and a focal point in Grant Grove in Kings Canyon National Park

Drive a bit further along the road and you come to the Redwood Mountain Grove, one of the largest sequoia groves. It covers 3000 acres. 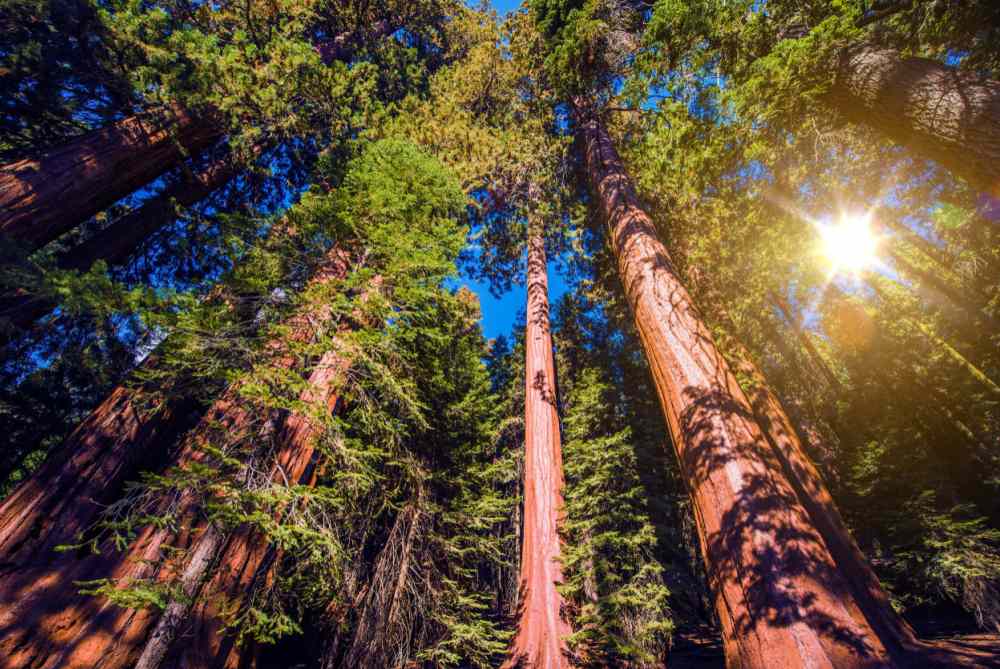 The grove is impressive with mammoth trees throughout. Redwood Mountain Grove is notable because it is in pristine wilderness condition.

All three of the park’s groves have loop trails, if you enjoy hiking or walking.

Most of the caves in Sequoia National Park are closed to the public for safety reasons.

Crystal cave is open to visitors with advance tickets being required. 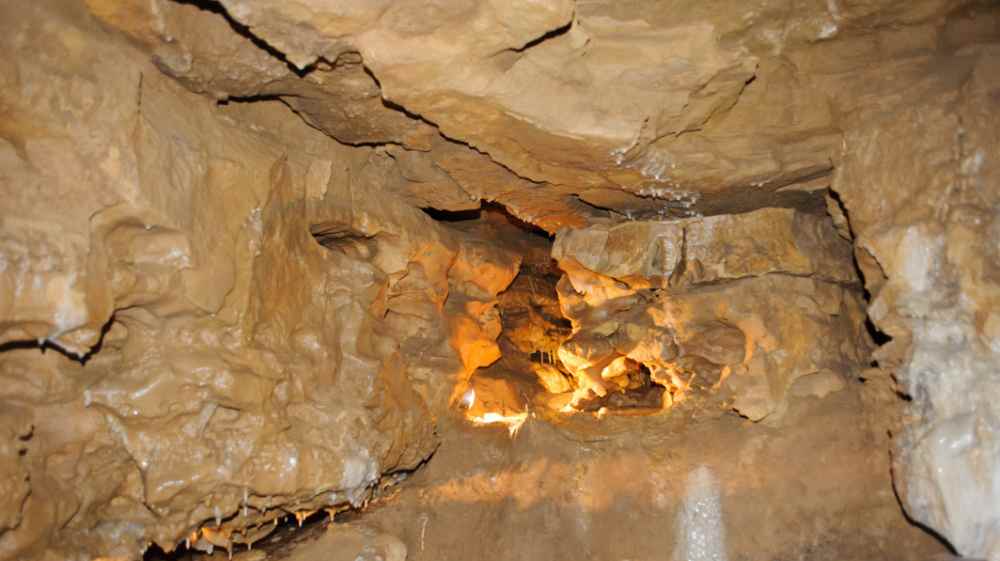 The park offers guided tours through winding passageways of the cave where you can enjoy a gallery of fascinating marble rock formations.

The elevation at Sequoia and Kings Canyon National Parks ranges from 1370 feet to as much as 14,494 feet.

Our drive through Sequoia National Park took us to elevations of 3000 to 7000 feet.

The climate in the park is divided into three zones: low-elevation foothills with an average rainfall of 26 inches, mid-elevation montane forests which harbor the sequoias, and high-elevation mountains with ample snowfall which can last all year in some areas. 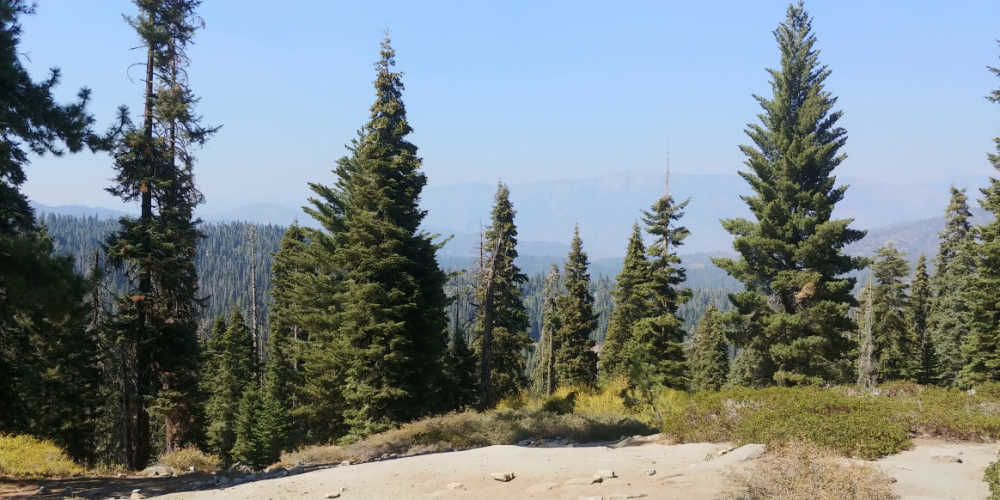 The park’s 26 sequoia groves grace the western slope of the Sierra Nevada Mountains that is 60 miles long.

If you wish to extend the drive, you can easily connect to Kings Canyon National Park for the same entry fee.

Bears live in Sequoia, so it is important to be bear aware. The parks are home to several hundred black bears, but no grizzly bears. Do not feed or approach bears or any other wild animals. 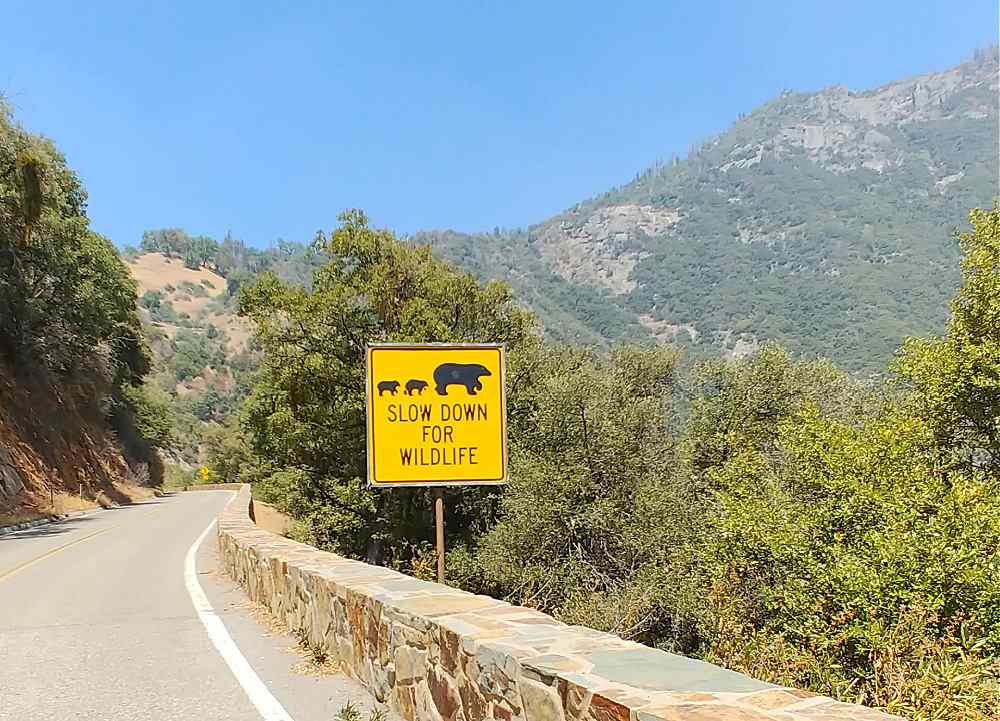 To minimize problems with bears, store food securely and keep a safe distance from them.

Rattlesnakes are common, as in any off road experience. Always be sure to look before you step or reach.

Readers of this post often ask questions about the park. Here are some that may interest you.

How large do the giant sequoia trees get?

Giant sequoias thrive in high elevations between 5000 and 7000 feet. The dry heat of the mountains are needed for their cones to open and release seeds. 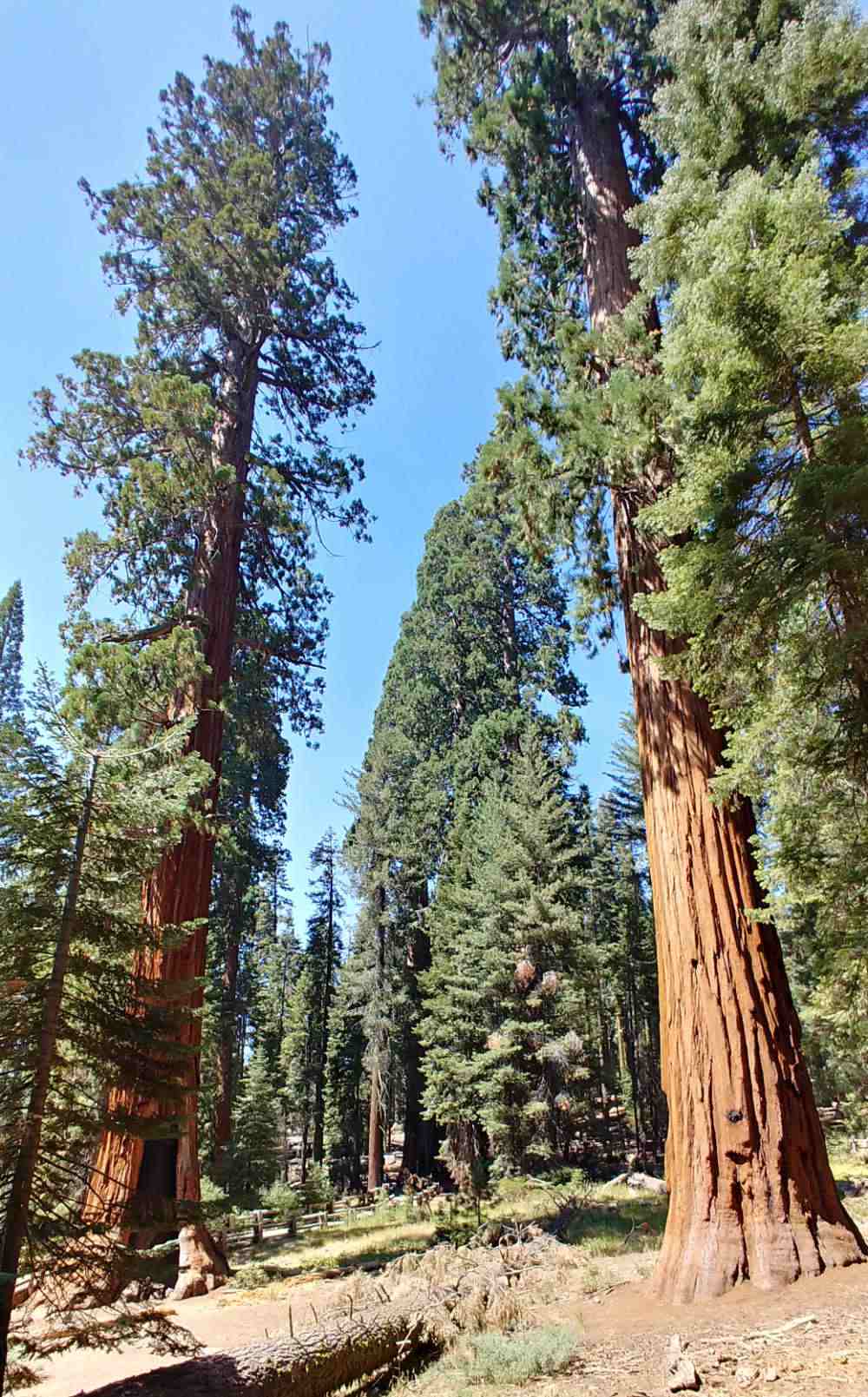 The trees reach an impressive height of up to 312 feet. While not as tall as the giant redwoods of California, they make up for this in size, usually substantially outweighing the redwoods.

Giant sequoias grow naturally only along the western slope of the Sierra Nevada Mountains.

When is the best time of the year to visit Sequoia National Park?

The best time to visit is from May to October when all areas of the park are open. July and August are peak times and the park is quite crowded then, so earlier or later dates are recommended. 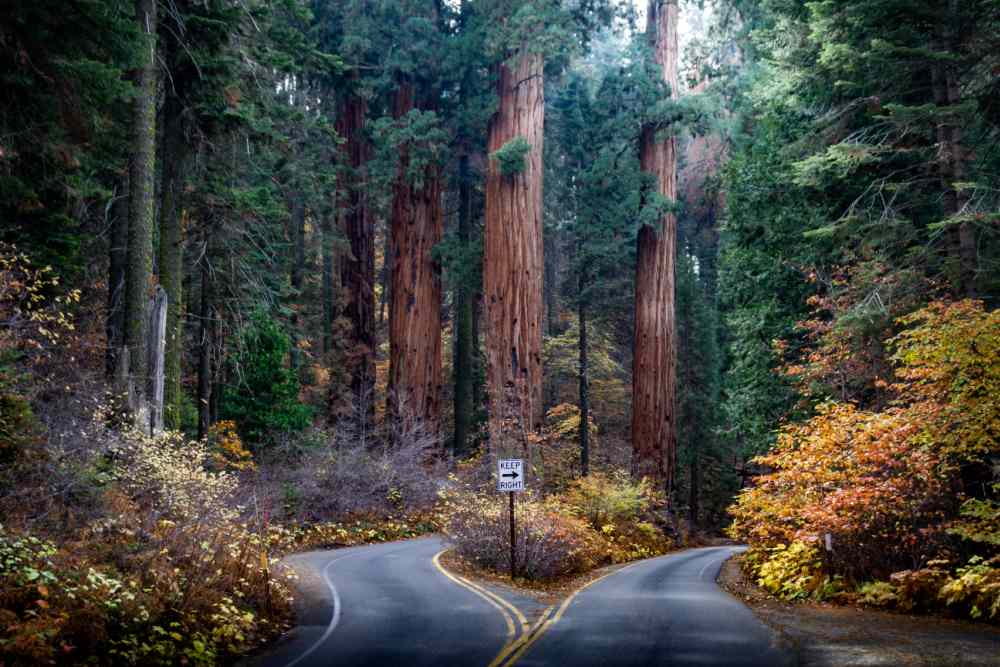 Sequoia National Park in winter and late fall is beautiful, but some areas of the park may be closed due to snowfall.

How many days does it take to tour Sequoia National Park and Kings Canyon?

Visitors can spend as little as a day for an overview trip, or as long as a week to fully explore the parks.

If time is limited, the must-see areas of Moro Rock and General Sherman Tree will give a good idea of what the park has to offer.

Is it possible to drive through Sequoia National Park?

Both Sequoia and Kings Canyon Parks are able to be seen in a vehicle from spring through fall. The road between the parks may be closed in winter.

Some of the highlights of the park are only visible on foot via walking trails, or by taking the shuttle buses.

There is no cell phone service in many areas of the park. There may be spotty areas when you will get limited reception, depending on your cell phone carrier, but you should not count on it.

For more trip planning information, be sure to download the free National Park Service app from the App Store or Google Play store and choose Sequoia and Kings Canyon. 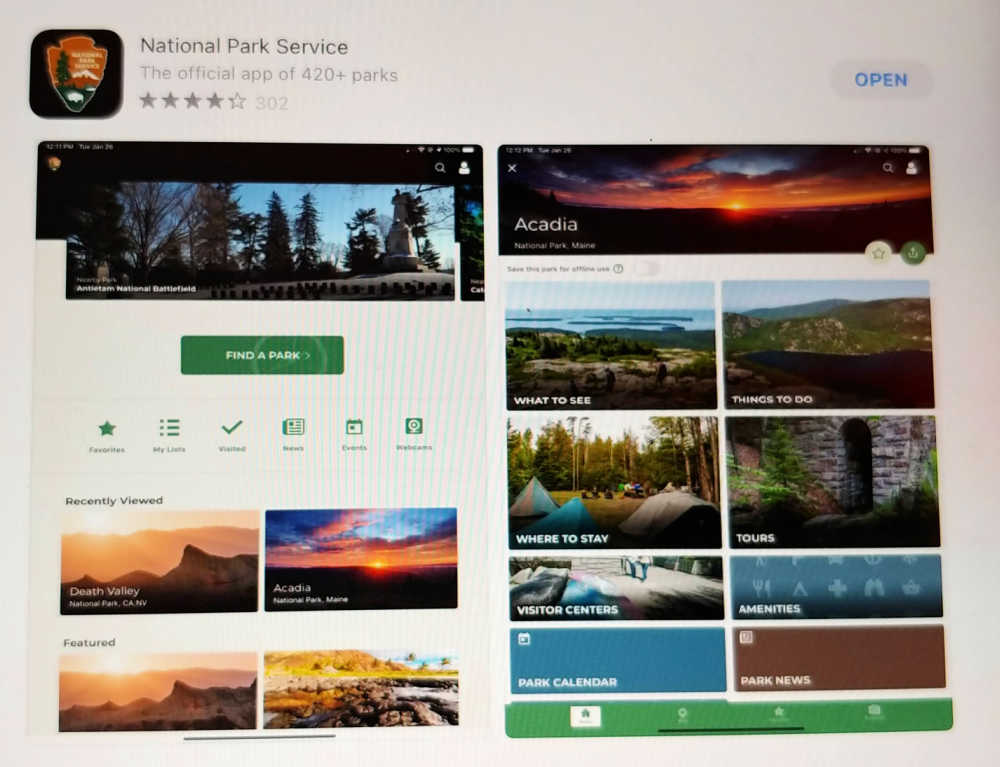 Since reception is spotty in the park, download the app before you get to the parks. 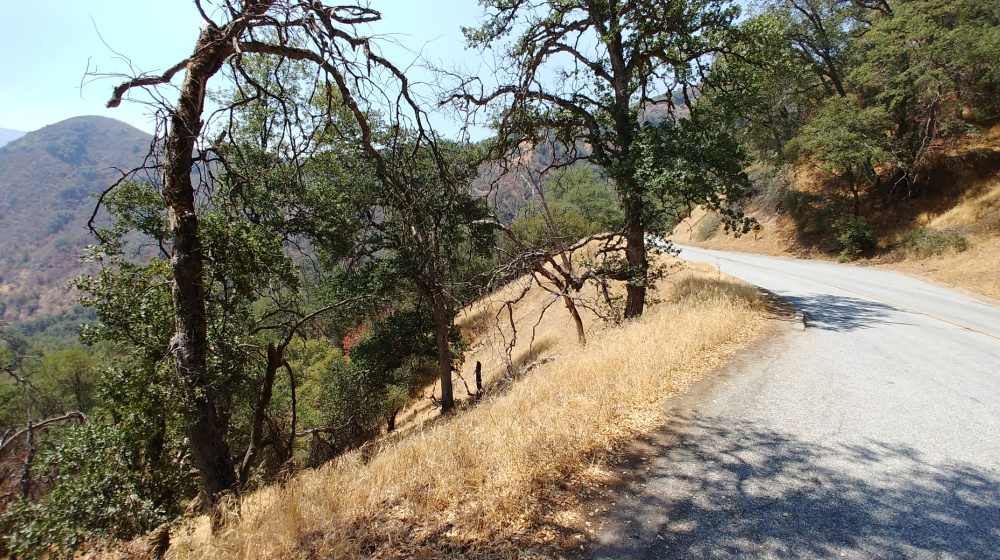 No east-west roads cross the parks and there is no road access from US 395 east of the parks. Gasoline is not available in the parks.

There are 63 protected areas in the United States that are designated by the National Park Service as national parks.

If you enjoy interesting drives with magnificent scenery, Sequoia National Park is a great one to cross off your bucket list!

Pin this post about things to do in Sequoia National Park

Would you like a reminder of this post about Sequoia National Park and Kings Canyon Park? Just pin this image to one of your travel boards on Pinterest so that you can easily find it later. 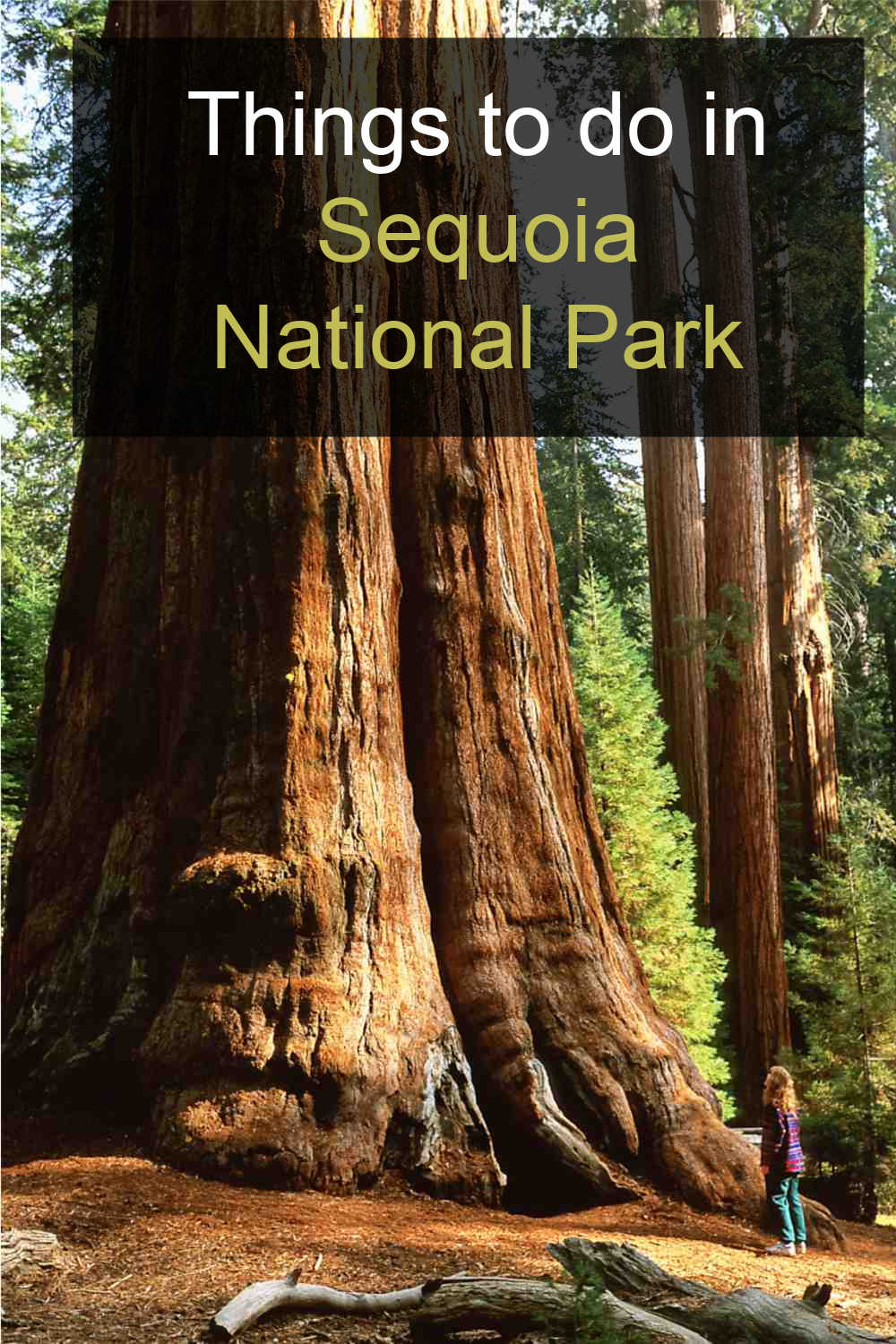