Seagrove, North Carolina is located about an hour and a half west of Raleigh and featured the largest group of working potters in the USA.  All around this small town, for about 30 miles, one will find Pottery Studios and stores that showcase the work of these artists. 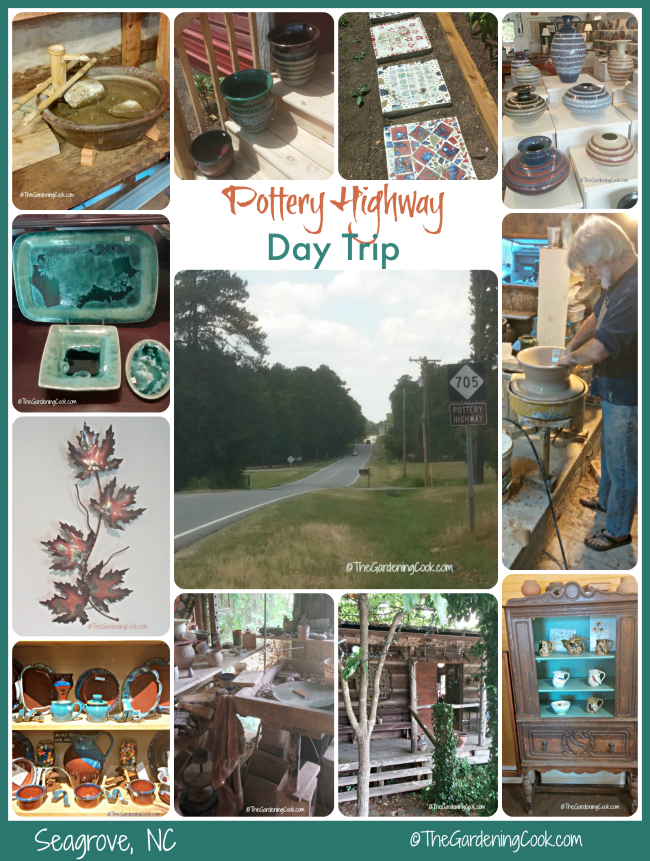 My husband and I are fond of antique shopping and do it a lot on the weekends, but we decided to tour the Pottery Highway this week for something a bit different.  I’m so glad we did.  It was delightful to see so many different styles of pottery all in one area.

European settlers came to the Piedmont region of North Carolina in the 1700s and brought with them their traditions of pottery making.  The made use of the abundant clay deposits found in the area to fashion wares for the home makers of the day, such as crocks, jugs, pitchers and baking dishes.  The area around Seagrove, NC is called the “Pottery Highway.” 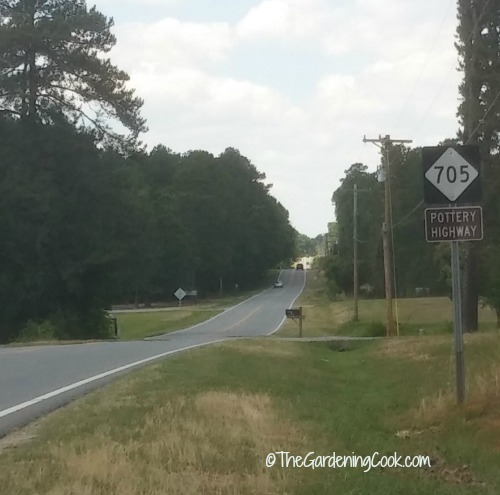 Seagrove remains a center for pottery production to this day. The works vary from potter to potter and feature folk art forms as well as many contemporary pieces.  Potteries are open Monday to Saturday with a few also open on Sunday.   The area also has two events – 3rd weekend in April, an Open Studio Tour, and a Fall event, held at Luck’s Cannery, which is open the 3rd weekend in November.

The pottery studios varied as much as the style of pottery itself. This little studio was nestled into the woods and the rustic charm continued inside. 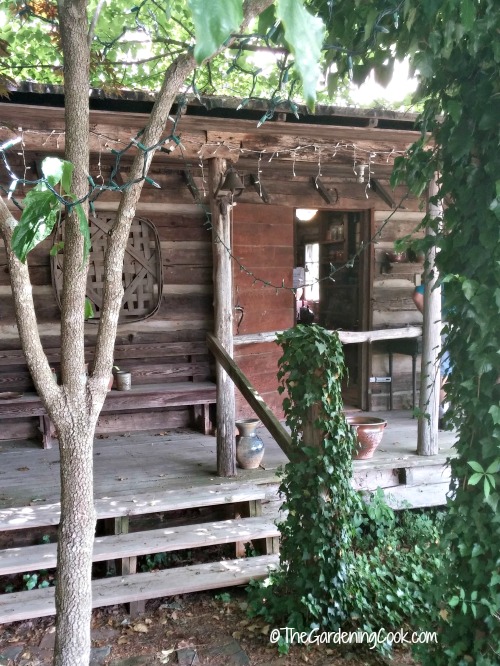 It is what I think of when I picture a potter at work. We were lucky enough to catch him in the process of forming a large pot. 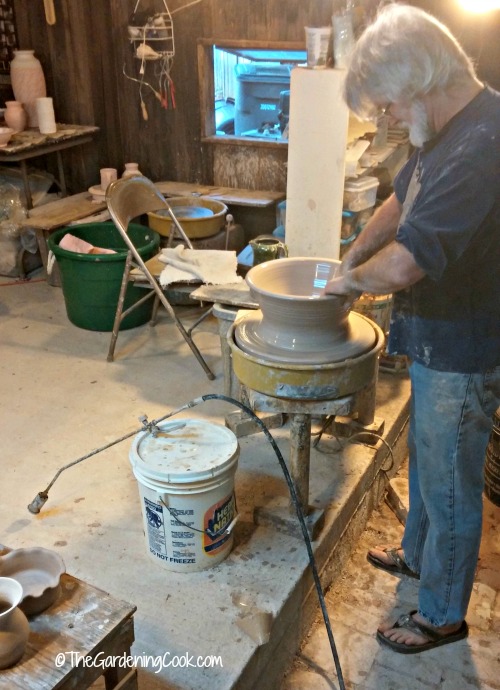 I found this studio the most interesting.  The man rents the property and the whole thing is very rustic, from the display cabinets to his workshop, which housed some really interesting tools. 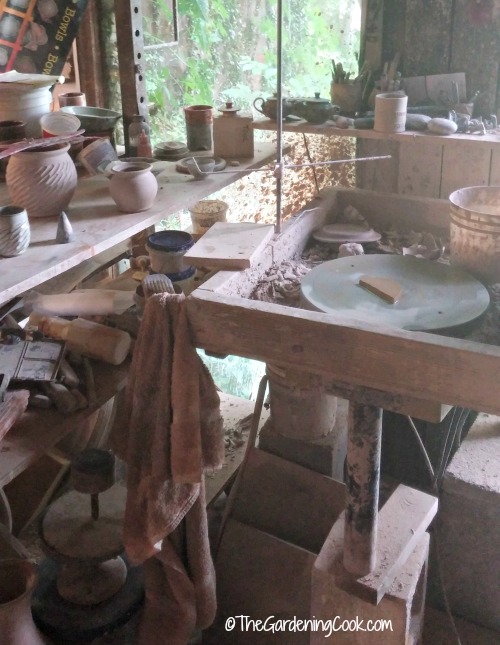 His work is rustic as well. There were a few pieces with pops of color, but much of it was very strong in earth tones. 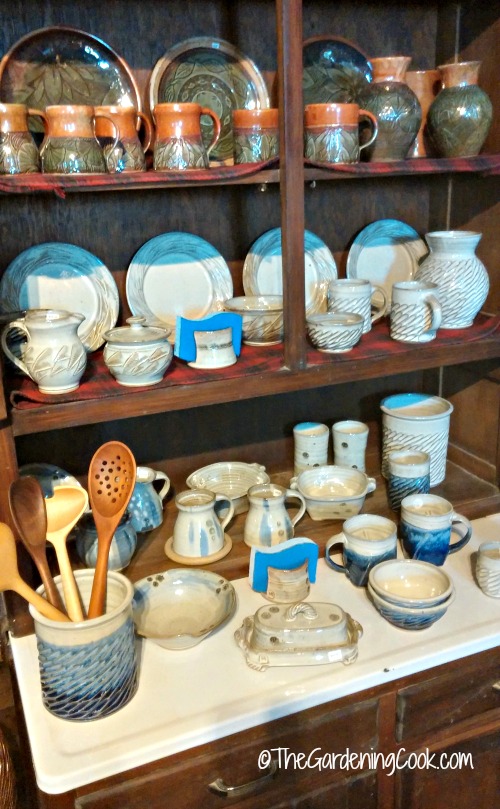 Our next stop was another small pottery shop.  This potter seems to have a thing for Asian inspired pieces – from chopstick holders to a Zen water feature that had a very calming feel to it. 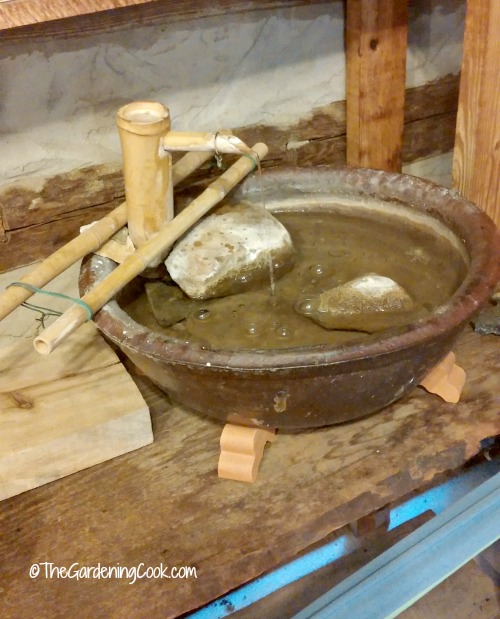 After seeing two rustic pottery styles in action, we were on the hunt for something a bit more contemporary.  Seagrove Pottery had it all.  This was more of a shop than a workshop, but the vast array of styles offered something for all tastes, from rustic to ultra modern. I love the way the turquoise compliments the clay color in this display. It looks very Southwest to me. 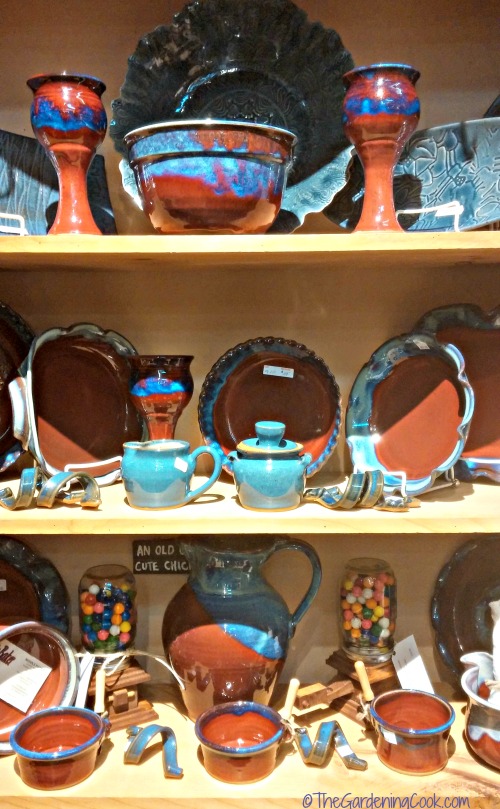 Even the ladies rest room had a display!  It’s a bit out of the season, but a hint at what the shop will have for us in store during the holiday season from October to the end of the year! 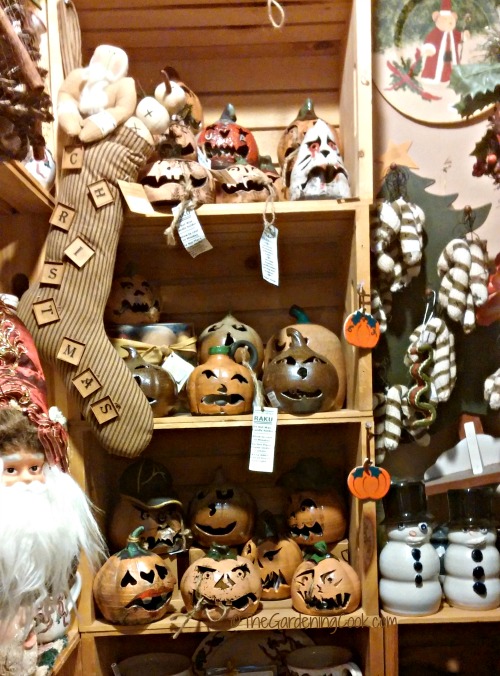 Our next stop was at Seagrove Stoneware Inn and Pottery. This husband and Wife team have a small pottery shop and also an Inn which is open year round. I was in love with the place from the moment I saw the stepping stones to their retail outlet. 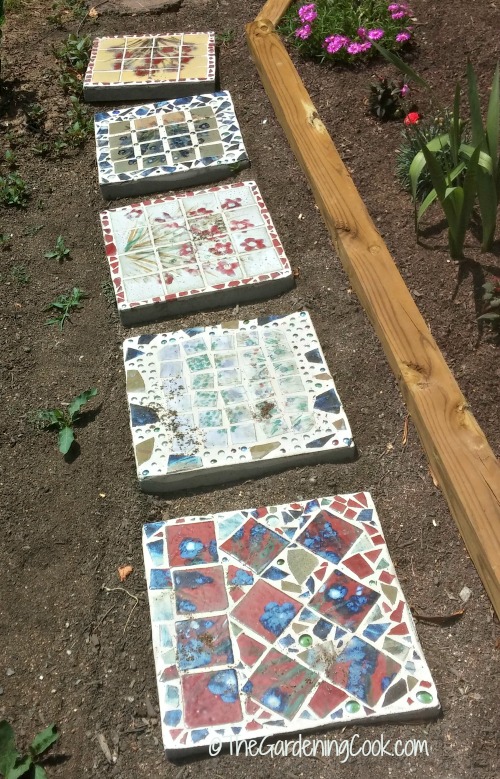 And their stunning pottery designs did not disappoint either!  Their wheel turned pieces had wonderful unique glazes and were just lovely.   I loved every piece on display in their shop! 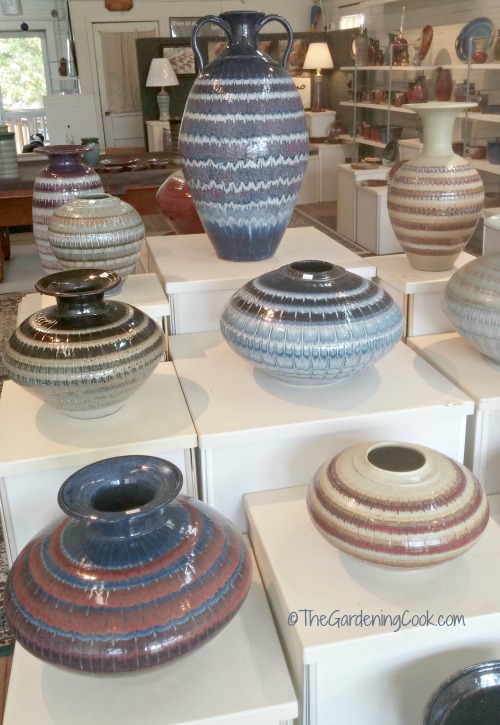 Just round the corner from the inn was the Humble Mill Pottery.   The Building is anything but humble!  It is a very old home with impressive front pillars.   The lady who runs it has an artist’s studio where she does the painting and a few rooms for displaying her creations. 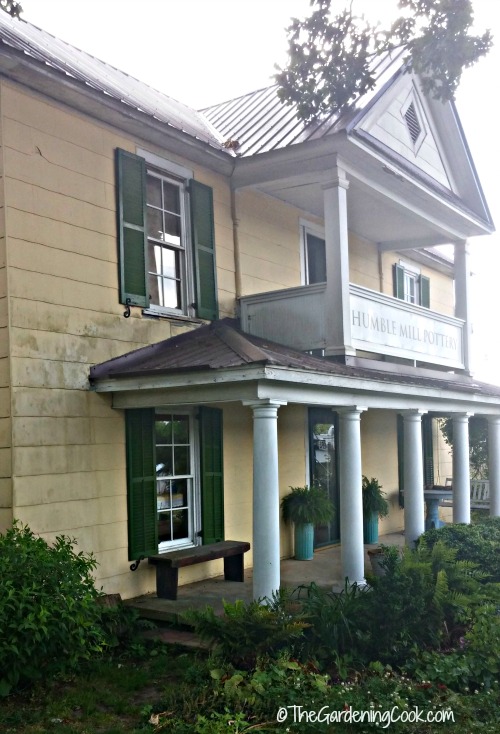 It has been open since 1970 and the lady who runs it spent 2 years in Japan and you can see that influence in her work.  The display areas were small, but all of the pieces were displayed in some very old vintage furniture that set them off well.  Her pieces are delicately hand painted and feature birds, flowers and trees. 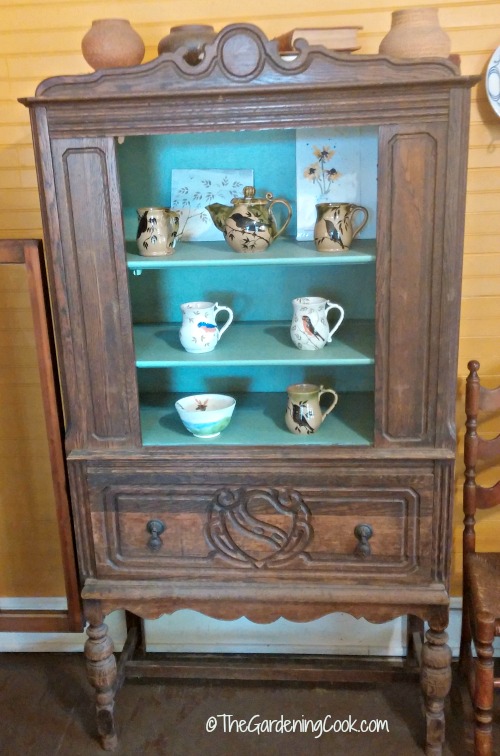 If you are interested in learning more about The Pottery Highway, this book by Stephen C. Compton, called Seagrove Potteries Through Time is available from Amazon. (affiliate link)   Stephen worked as a small town newspaper photographer in the 1970s and became a noted expert on the subject of Seagrove pottery. 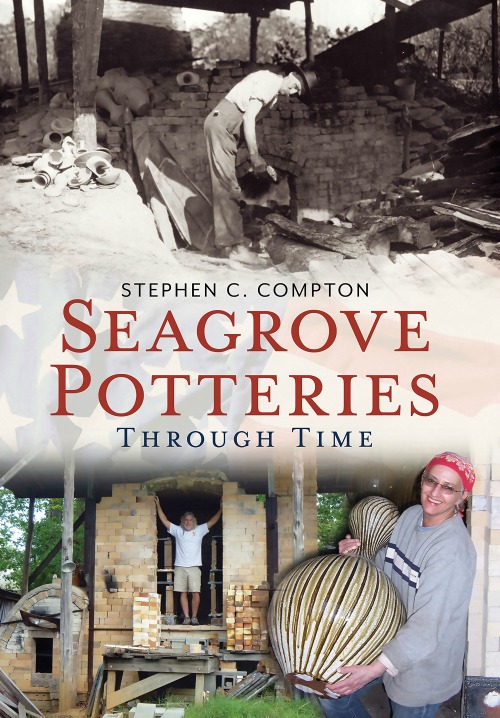 Our final stop of the day was the gallery for Frank Neef Pottery.  It was the perfect end to the day for us.  I loved everything about this gallery, from the carefully cared for plants on the porch and in the gardens, to the Eclectic display of his gorgeous designs. 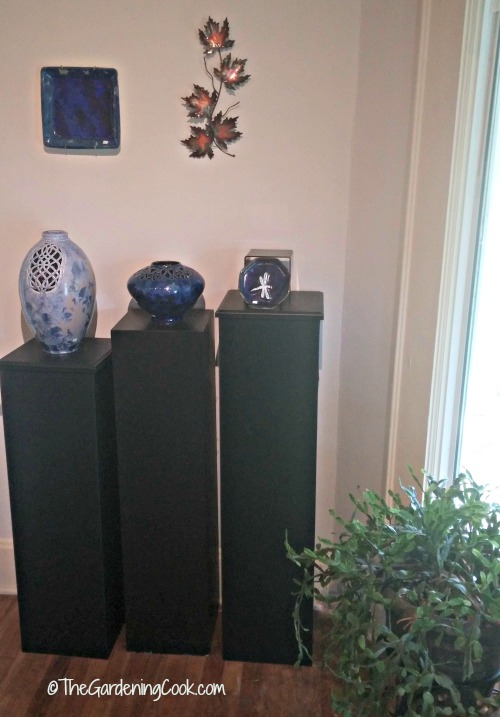 Frank Neef is known for his crystalline glazes. Many of the pieces featured it and they were all beautifully displayed. 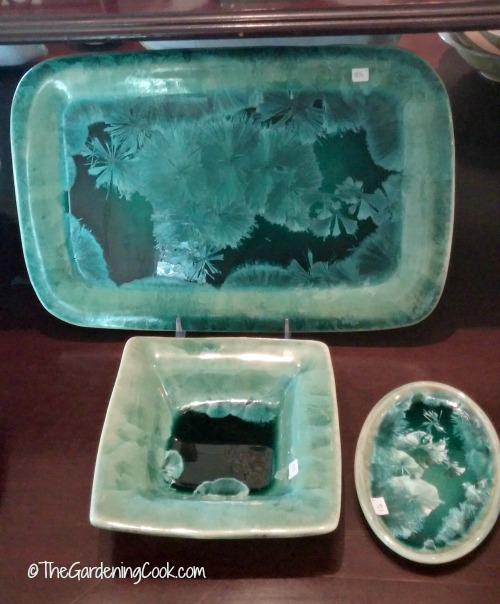 There were also some lovely wall displays made of copper.  This copper maple leaf display is one that my husband and I bought thought was beautifully made. 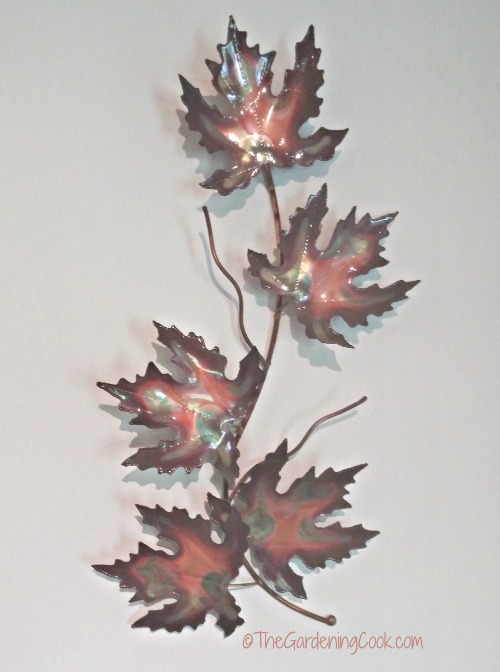 As luck would have it, his was the last gallery that we visited and it was a fitting end to the day for me.  It’s obvious that the couple who own the place are also plant lovers.

The size was about 3 feet in diameter. It puts my Christmas cacti in 3 gallon pots to shame! 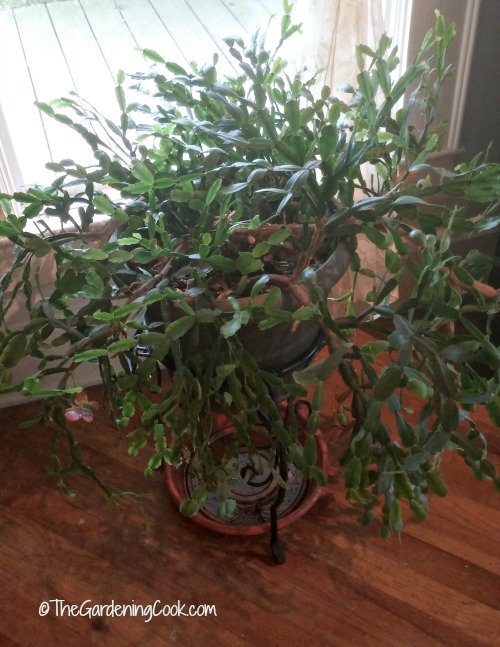 As we were leaving, I spotted this corner spiral staircase plant holder.  I begged my husband to see if he could get them to part with it, but we had no such luck.  The stairs are made from metal letter cut outs with the word “garden” on each run.  I adored it and will be on the lookout for a similar one till the end of my time! 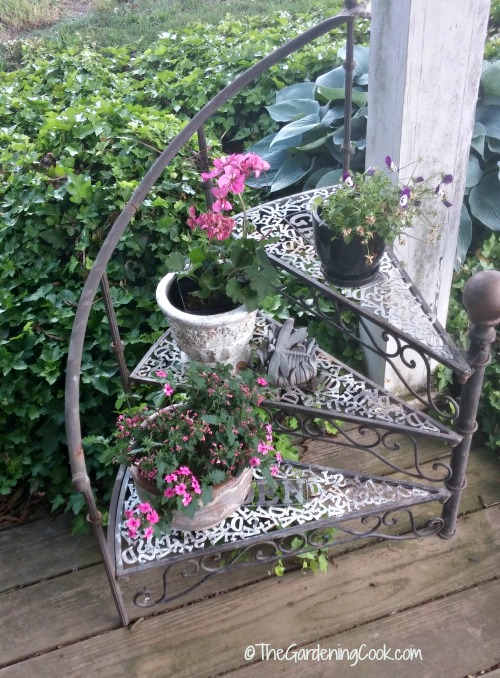 As we were leaving the gallery, I took one last photo of these stepping stones in their hosta garden.  What an apt farewell to a gardener who also loves pottery! 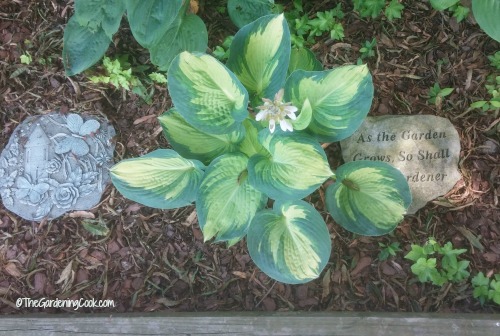 If you are in North Carolina, be sure to visit the Pottery Highway to experience a 200 year old tradition and see what Seagrove has to offer for you.  Have any of the readers of my blog taken a tour of the Pottery Highway?  I would love to hear your comments below!