This Swiss chard breakfast skillet is crammed full of fresh grown veggies and the salty taste of bacon, all topped with soft cooked eggs and fresh parsley.

Breakfast at my house is either a grab and go on the way out the door moment, or an occasion to experiment with flavors and tastes that will hold me over until well past lunch.

This hearty breakfast stir fry fits both mornings.  The recipe is an explosion of tastes and textures but it’s also ready in about 20 minutes, so you don’t have to wait for the weekend to prepare it. 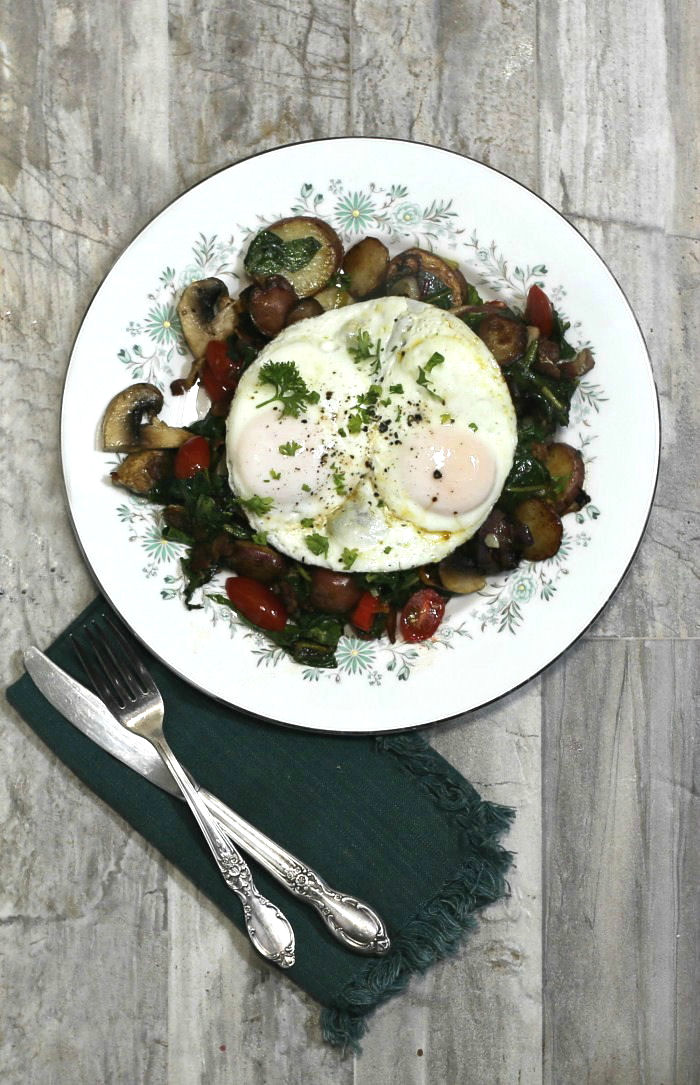 What is it called a breakfast skillet?

This hearty breakfast choice is a meal in one pan.  At restaurants, it’s often cooked in a cast iron skillet and features a combination of normal breakfast foods, such as hash browns, bacon, eggs and cheese all cooked and served in one dish. 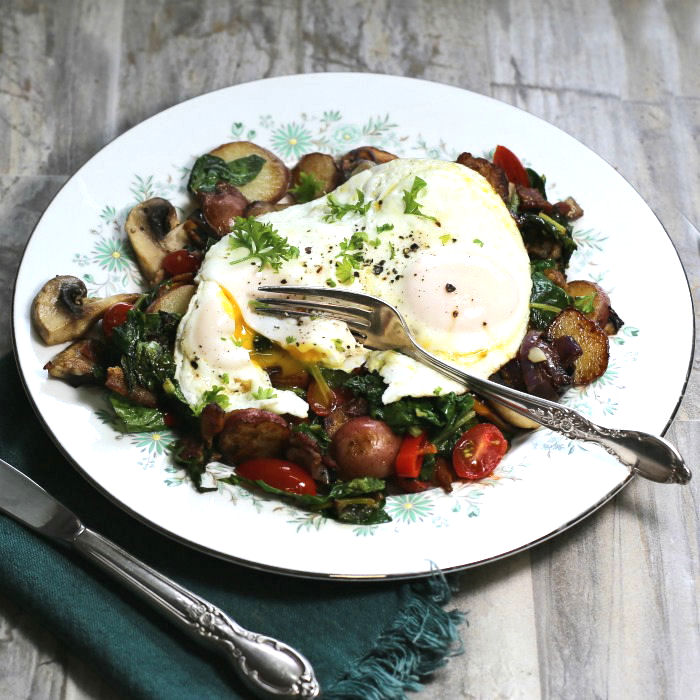 Do you have a lot of Swiss chard in your vegetable garden and don't know how to use it? Try this hearty breakfast skillet. It uses a bunch of fresh vegetables and tastes amazing. Click To Tweet

I saved calories in my recipe by omitting the cheese, limiting the bacon and skipping the oil. Instead, I opted for a load of fresh vegetables.  My Swiss chard plants and baby tomatoes are maturing right now and the leafy greens of Swiss chard makes the perfect base for the recipe.

It is a super easy-to-grow vegetable, too. Find out more about growing Swiss chard here.

A breakfast skillet recipe with potatoes adds some starch which makes the meal quite filling. 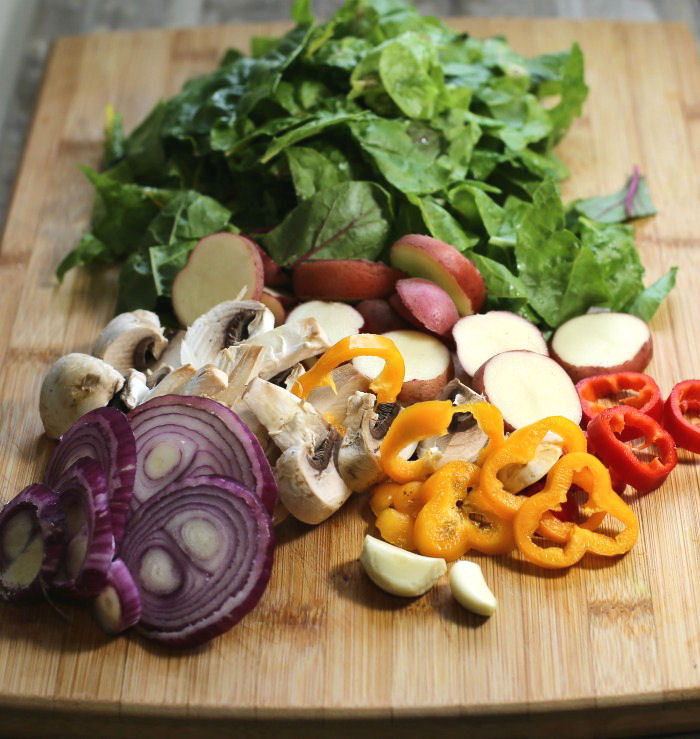 Start by cooking the bacon.  When it is slightly crisp, remove to paper towels and then chop. The potatoes, onions, and peppers get cooked in the same pan and then the chopped bacon is returned to the pan. 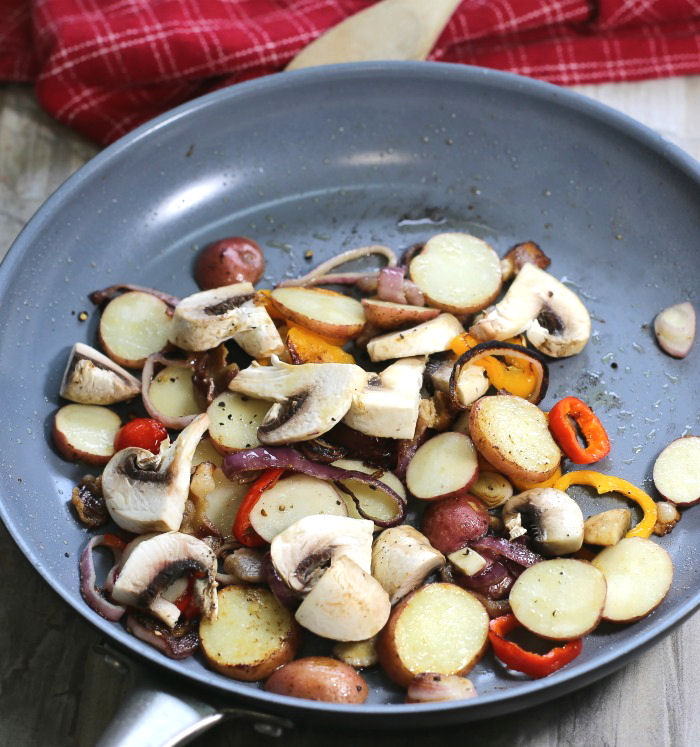 Cook the mushrooms and garlic and then add the Swiss Chard and grape tomatoes and season well. I love the colors that all the veggies give to the pan! 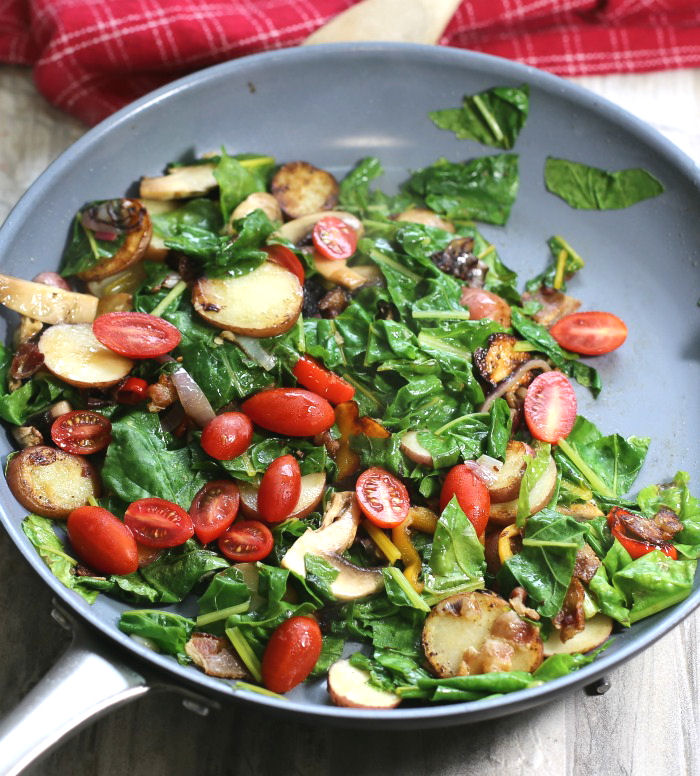 Halfway through the cooking of the skillet, I use a small pan with a lid to soft cook some eggs, so that everything well be ready at the same time.

Serve the Swiss Chard skillet topped with the soft cooked eggs and garnished with fresh parsley. 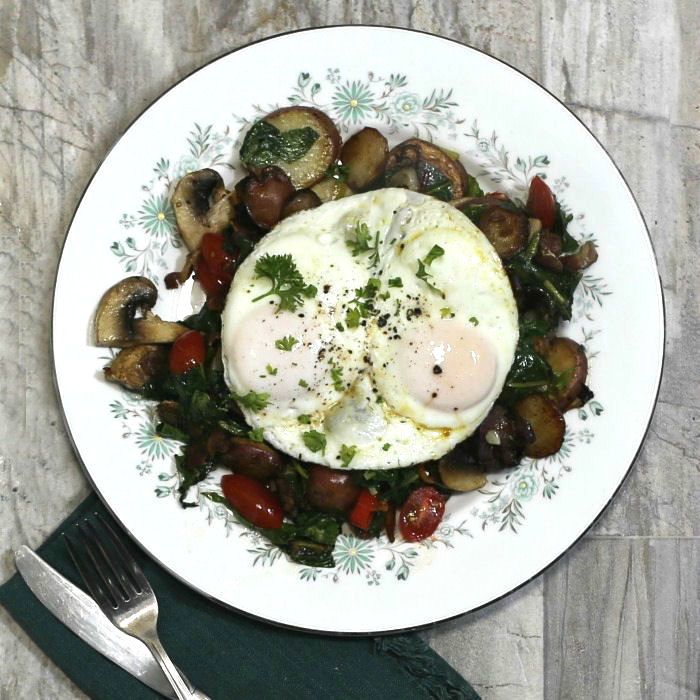 Every bite of this Swiss chard breakfast recipe is an explosion of farm fresh flavor. The onions and garlic give the recipe a bit of a bite and the sweet peppers, the Swiss Chard taste and tender mushrooms both add a caramelized sweetness to the dish.

The red potatoes give it a starchy taste that will stay with you for hours. 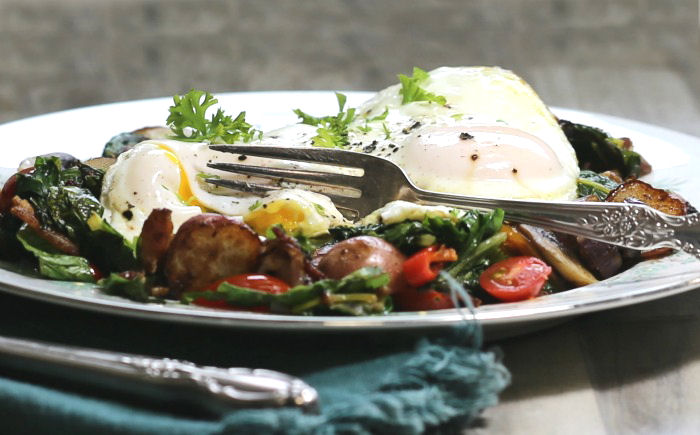 Swiss chard has a taste that is similar to beet greens and spinach but the stems are slightly sweet and taste almost like bok choy. It is a wonderful addition to any stir fry dish.

See my Swiss chard with lemon and Parmesan Cheese for another great tasting recipe.

Tips for a quick and awesome breakfast skillet

If you want this recipe to get on the table quickly, these tips will help.

This hearty breakfast skillet is naturally gluten free, and fits into a Whole30 meal plan (check your bacon label to make sure it is compliant.)

It can be adapted to a Paleo diet by substituting sweet potatoes for normal potatoes.

If your mornings are as rushed as mine are, and you are tired of grabbing a muffin or bagel for breakfast, why not make this egg and potato breakfast skillet recipe with Swiss chard for a much more satisfying start to your day?

It’s ready in less than 20 minutes and tastes amazing!

Swiss chard is a nutrition powerhouse. This recipe gives two heart servings at 308 calories each. The meal is high in fiber and protein.

I used normal bacon that is Whole30 compliant.  To reduce the sodium content, you can substitute a lower sodium bacon.

To remind you of this recipe, pin this image to one of your group boards so that you will be able to find it easily later. 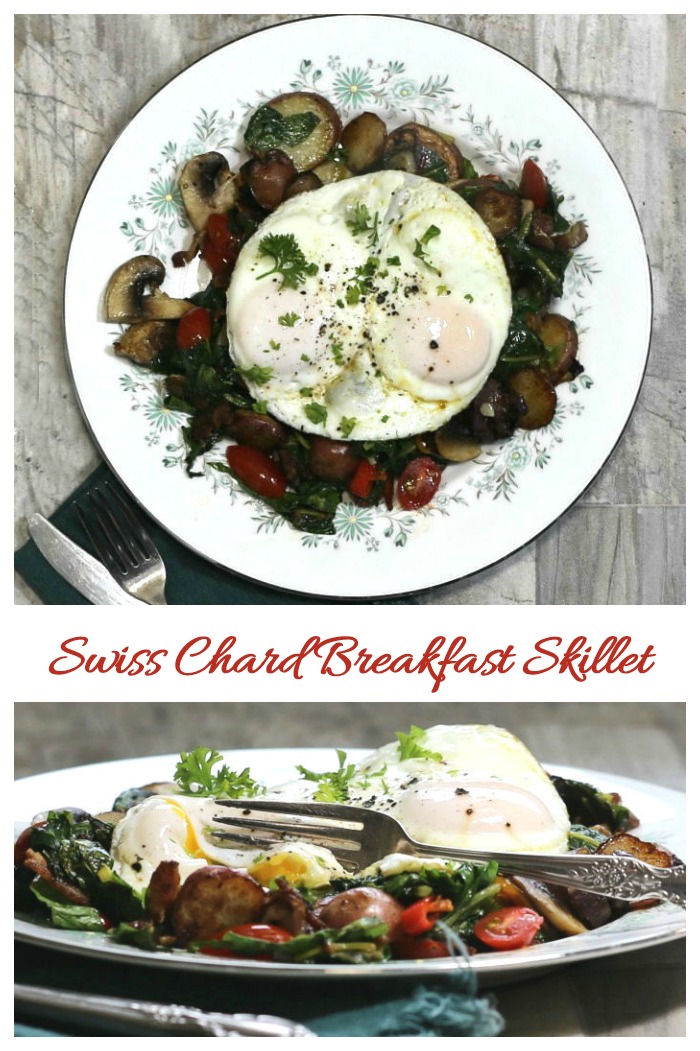