This Mexican inspired recipe for Pollo a la Crema features chicken breasts in a crema sauce with mushrooms and sautéed green peppers.

It is rich and creamy with a spicy sauce.

When my husband and I eat out at our favorite Mexican restaurant, pollo a la crema is always a popular choice. Would you like to have it more often than an eating out experience?

This dish is very easy to make at home. Serve the recipe with warm tortillas and a side of re-fried beans and Mexican rice and you will have one of your favorite Mexican restaurant meals any time you wish, at home! 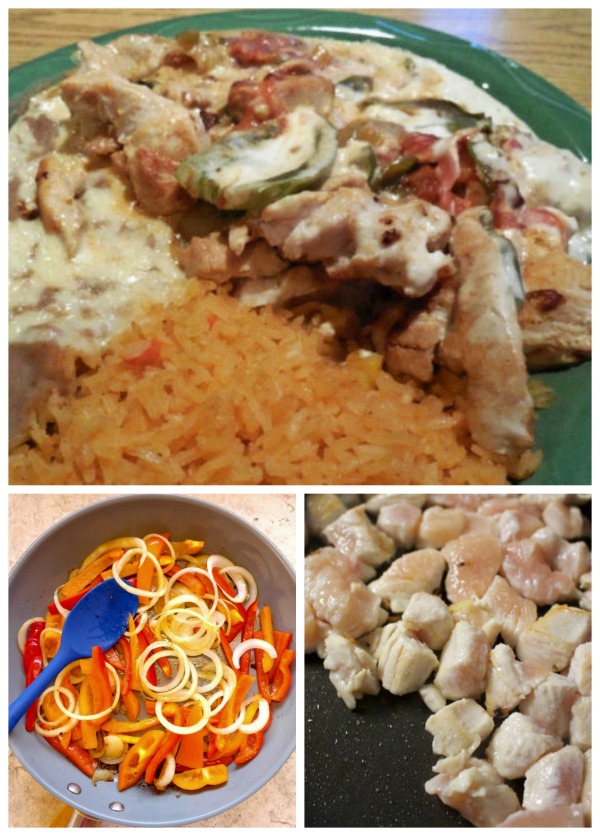 What is in Pollo A La Crema?

Pollo a la crema is flavored by the use of Mexican crema, onions, and sweet peppers.  You can use green peppers or colorful peppers, depending on what you have on hand.

Both taste great. If you have a fondness for more spice, you can also add in some jalapeño peppers, as well. 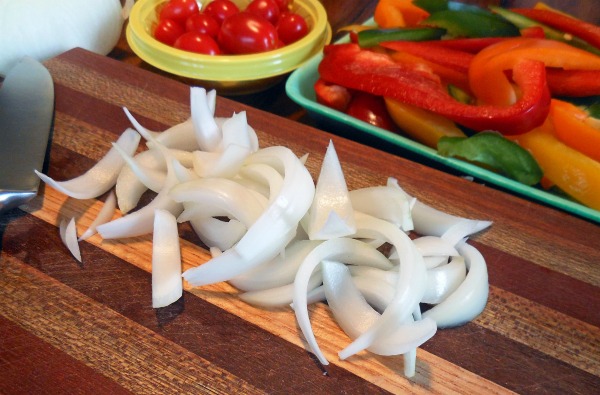 What is Mexican crema?

Mexican Crema is a tangy and creamy condiment that is very similar to sour cream. However, it is thicker and richer than the sour cream American’s are used to. .

The thick and slightly tangy mixture adds the perfect touch of creaminess to many Mexican dishes. It is often used on tacos, tostadas, enchiladas or  anyt spicy food to make it less hot.

You can try using sour cream or heavy cream if you don’t have Mexican crema. However, sour cream has a tendency to curdle in hot preparations and is thicker than Mexican cream.

Also, Mexican crema is not quite as sour as sour cream and is thicker than heavy cream so the recipe works best with Mexican crema.

Start by cooking your chicken pieces in hot oil.  Set aside and keep warm. 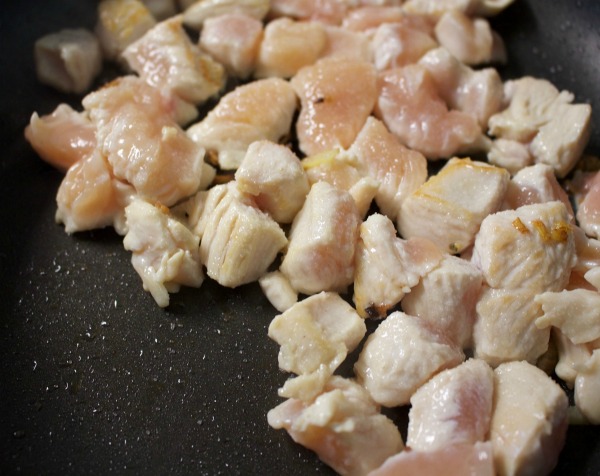 Add the onions and peppers and cook them gently. 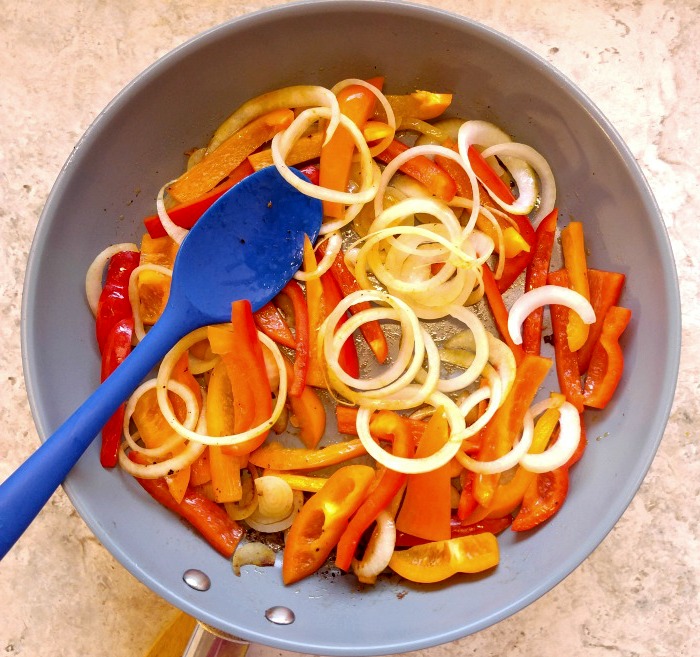 Stir in the mushrooms and cook gently.  Return the chicken to the pan.  Combine the Mexican crema and paprika and cook until the sauce is hot and bubbly.

I like to serve this dish hot with refried beans and Spanish rice. Add some tortillas, too, if you want a more hearty meal.

This recipe for pollo a la crema is creamy and decadent with the warm smoky taste of paprika. I love the way the peppers and onions compliment the sauce.

And for those of you who added the spicy jalapeño peppers, there is also a nice kick of heat! 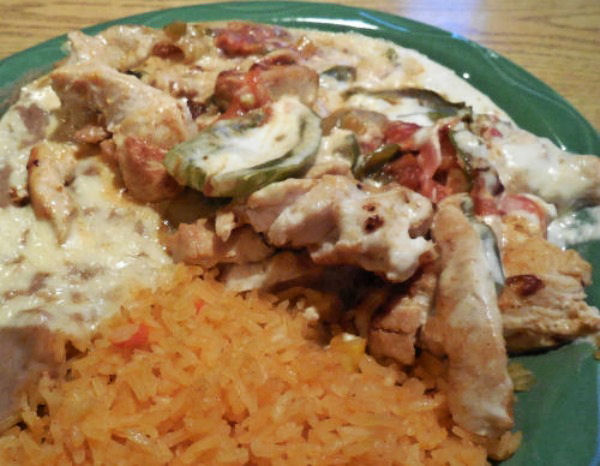 For another tasty Mexican meal be sure to check out this Chori Pollo recipe.

Would you like a reminder of this recipe for Pollo a la crema? Just pin this image to one of your cooking boards on Pinterest. 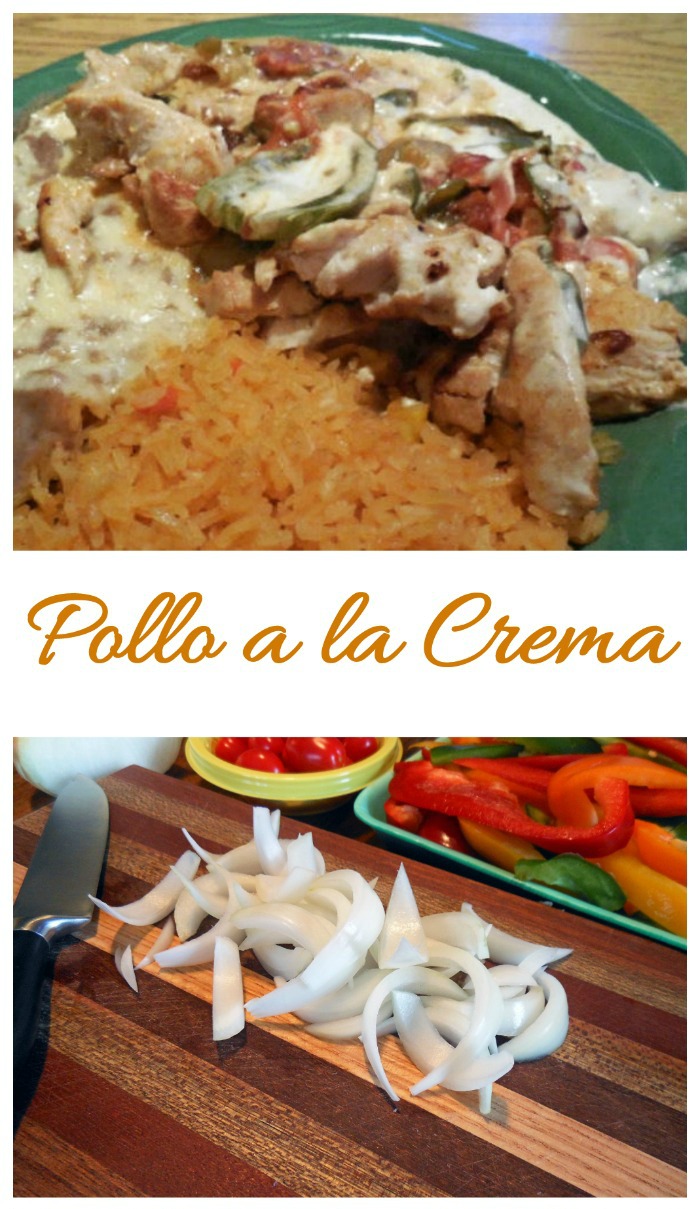 We have been enjoying this recipe for years THANK YOU! Pollo a la Crema is my husband's favorite restaurant dish, his mom's too! Now he won't order it when we're out. Says mine is better! I was so thrilled to find your recipe! It's an elusive recipe on the internet, so again, thank you! I follow it to a T with two small exceptions. I add more mushrooms because we love them. I recently started adding 2 to 3 tbsp of cream cheese. My husband said "I don't know what you're doing different, but keep it up! It's better than ever!"

Thank you for your recipe :) I made it tonight for dinner with a side of Spanish rice and tortillas. Delish!

Thanks for the recipe. I double down on the sour cream and Paprika. Instead of olive oil I use lard. I also fry my jalapenos in the lard with the chicken (all this after trial and error to find what my taste likes most). The extra sour cream makes it richer and thicker. Lard adds flavor too, or perhaps its the olive taste I'm taking out, I like it better in any case. I also add some garlic powder near the end about three min before the sour cream.

Great recipe! I added a little ground chipotle pepper for some kick. I had to add salt, also, for my family's taste (I use Better than Bouillon and I think it's not as salty as regular bouillon cubes). Thank you for sharing!

Glad you enjoyed the recipe Karen!

Do you think this can be made a few days in advance and reheated? My daughter wants this at her Quinceanera

Hi Janine. Most dishes can be reheated but my experience is that sauces can sometimes break when they have been refrigerated and then reheated. I would do it for personal use at home but don't think I would recommend doing this for a special occasion. Carol