I thought it would be nice to start an Osiria Rose Photo Gallery.  If you love growing perennials, it may be worth trying to find this Osiria rose, in spite of its reported growing problems.

Osiria Rose is a hybrid tea rose that was first hybridized in Germany by Mr. Reimer Kordes of Germany in 1978.  The rose was introduced in France by Willemse France under the name ‘Osiria’.

Photos of the rose that have made their way around the internet are highly photo shopped. Several of my readers have grown the rose successfully, though and have shared them with me.

I’ve put together a photo gallery to show the rose in all its beauty.

I will add to the Osiria Rose photos gallery gradually as more and more readers share their photos.  This way, we can have photos of the actual rose at it grows, instead of the photo shopped image which we would never see in our gardens.

Osiria rose has a strong fragrance and blooms throughout the growing season. It is hardy to zones 7b and warmer. The rose is hard to grow and even harder to find.

It is a weak variety that is prone to all sorts of problems.  The rose is a beauty, though, and worth the care required to grow it.

This is the photo shopped image that started the online craze for this rose a few years ago.  One of my most asked questions from readers is “Where can I buy Orisia Rose?”

Very few growers in the USA stock it, and those that did in 2014, when the craze started, and in early 2015 no longer carry it because of problems growing it.

And NONE of them look like the Osiria rose all over the internet. We now have “fake rose news!” 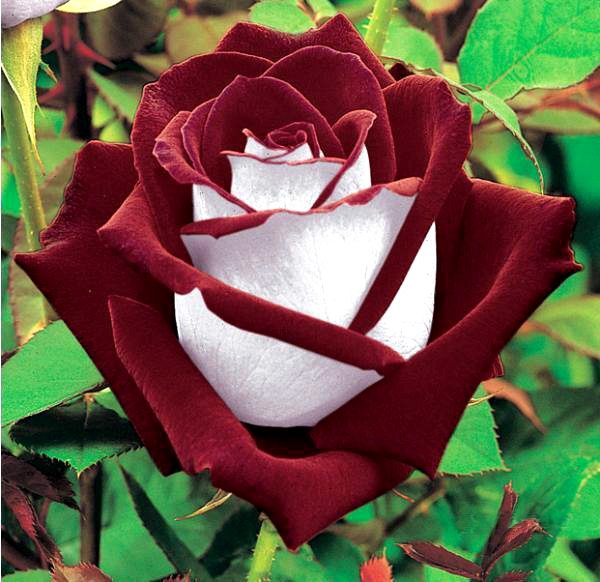 The roses in this Osiria Rose Photo Gallery don’t look much like the photo shopped rose.

The first reader who shared images of an Osiria rose that he grew is Carl H.  Carl had decent luck growing the rose but was a bit disappointed at first. This image shows the rose as a bud.

It looks pretty much like a red rose, except for the light colored bases to the petals. 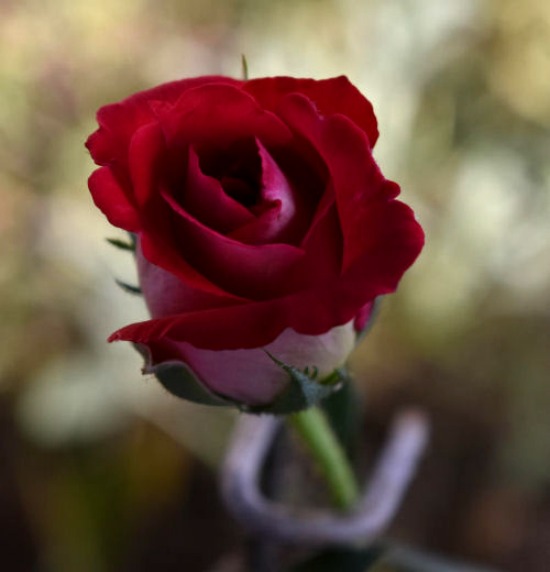 This image shows the rose as it started growing. The color white is very very faint here. 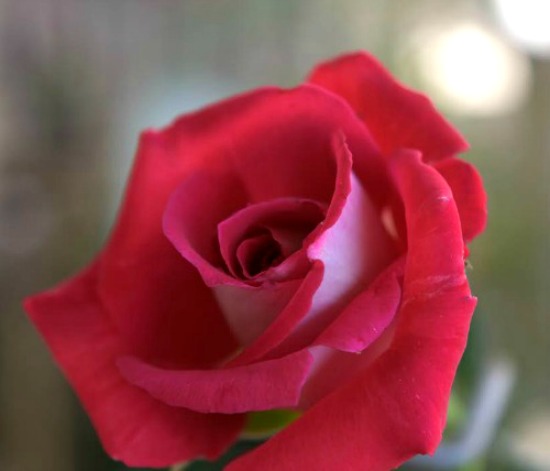 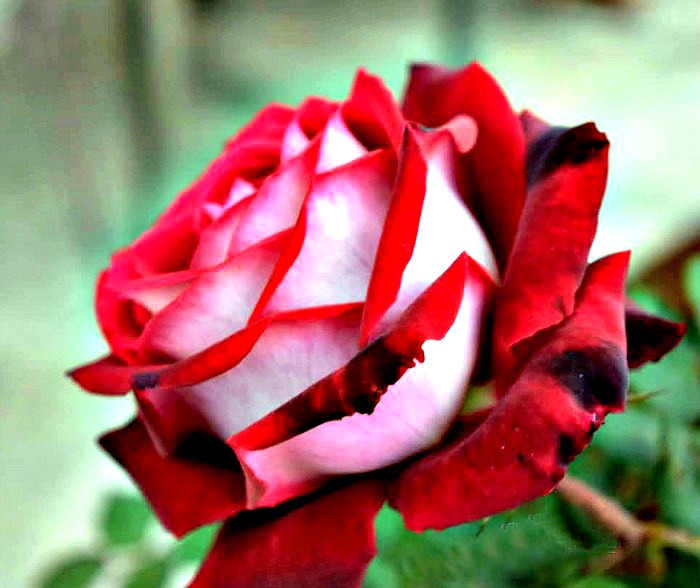 Another reader, Tom, shared this photo of his Osiria.  The rose does definitely have the two colors showing prominently. 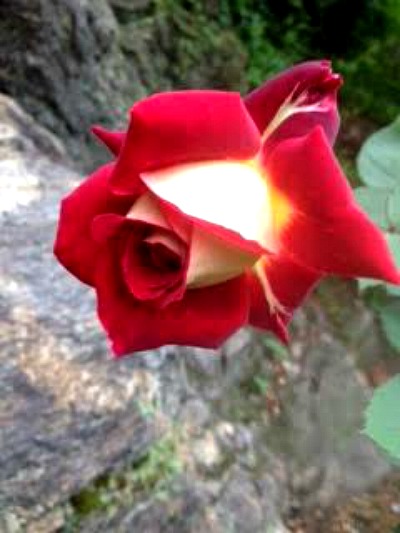 This photo for the Osiria Rose Photo Gallery has been sent in by reader Pam.  Pam’s photo seems to resemble the photo shopped rose in the center but the edges still look very much a solid color. 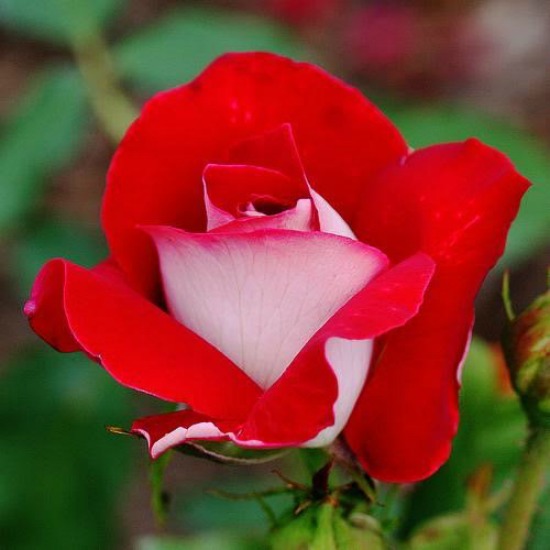 Tammy shared a photo of a double sided Osiria rose.  Instead of the inner petals showing the white color, one whole half of the rose is white and the other is red.

Tammy described this as an Osiria rose but but did not let me know where she purchase it.  The two sided look is not common to Osiria, so it may actually be another variety.

Reader Dora has given us this information about the double sided rose in the comments below:  The half white half red rose is either a discoloration of a red rose due to temperature and other unknown factors.

I’ve read suggests it’s either a genetic mutation or a chimera (=both white and red genes being equally dominant) That’s how new species start. It is definitely not an Osiria. 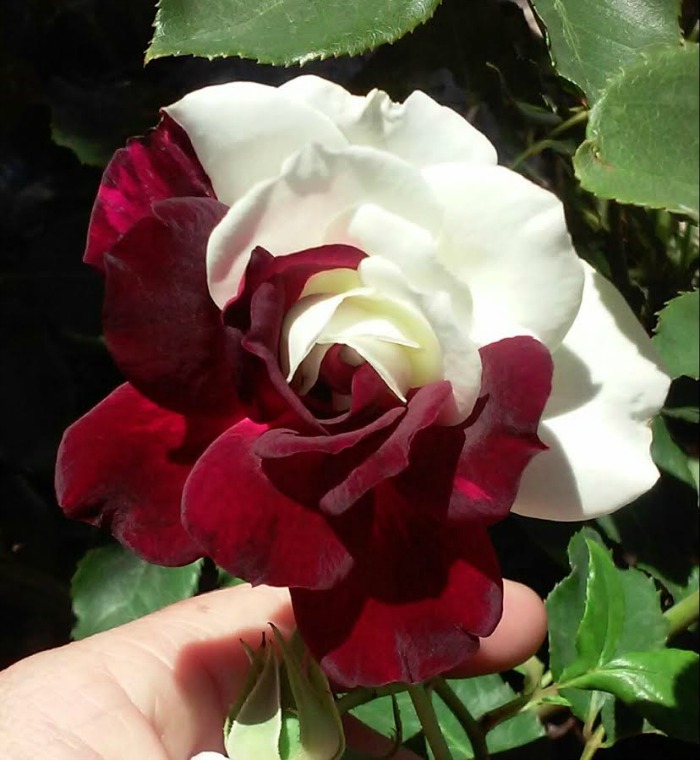 Do you have an Osiria rose that you have grown successfully?  Please submit an image in the comments below or email me a photo.  I would love to add it to the Osiria Rose Photo Gallery.

Rose colors all have a different emotion attached to them.  To give the perfect bouquet, check out this post to see what the colors of roses mean.

I got a white rose bush from the Tractor Supply Store here in Florida some weeks ago and 3 of them have stated to bloom and part is tiny white and red . they haven't completely bloomed yet! I'm wondering why and what's going on with the rose bush ! Did they confuse it for a white and its red or is it an osiria rose and or both? Any ideas?

HI Michelle. That question would be better answered by someone at Tractor Supply Store who can see the plant in question.

I purchased some seeds from Amazon. THIS should be interesting! I only spent $1.83 for 20 seeds and they came from Malaysia so..... ? LOL If they grow into a rose, I will let ya know!

I am intrigued by some of you commente about incomsistancies within the blooms of Osiria. I HAVE never found that .I had twn plants at one time and found them excellet blooms of the same quality. It is alitte tougher to grow but that depends entirely on soil, water , fertility and care. The afore mentioned differnces could be mis named plants which can happen at digging time. Then again roses have strong propensity to sport at grafting and this may also have happened to some of the afore mention plants . They may also sport on the plant themselves.

Can you buy these two tone roses if so let me know where and how much.

HI Betty. I don't sell any plants and have not had luck finding them for sale in the USA.

Here is the same rose 10 days after being cut. They last beautifully, along with the lovely fragrance. Elaine (England)