Nature and history buffs have a chance to merge by visiting the Oklahoma City Riverwalk area.  This long, leisurely walk combines nature and water views with sculptures of the Centennial Land Run Monument. 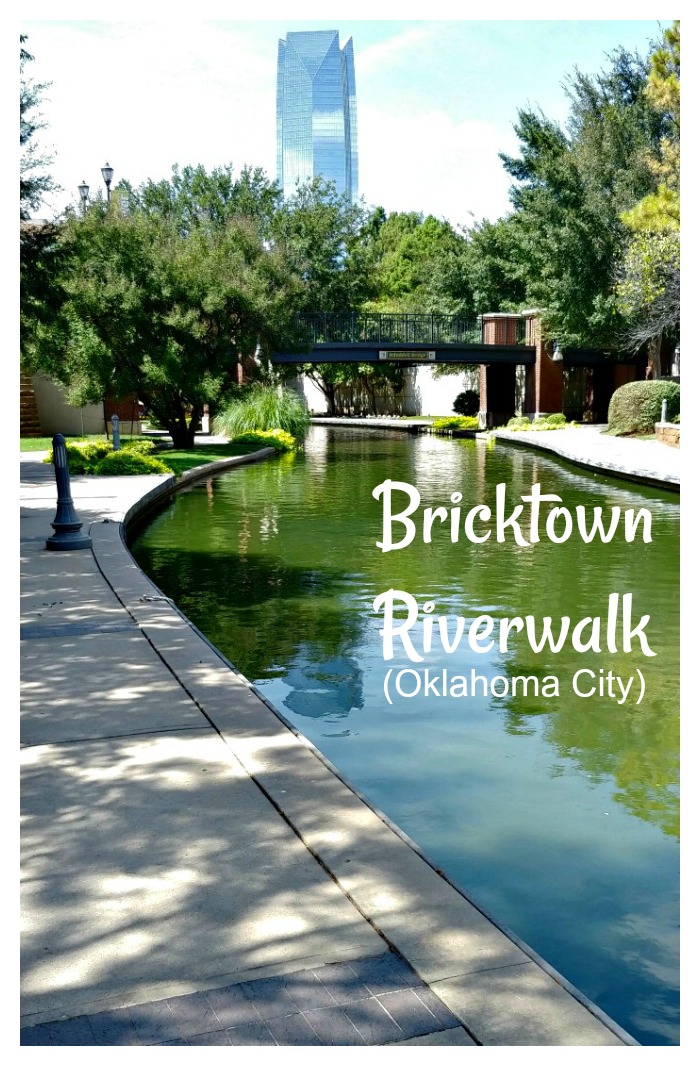 Seeing statues which depict real people is something that I enjoy visiting when we travel.  (See the Elizabethan Statues of Roanoke for another interesting post on this topic.)

Things to do near the Oklahoma City River Walk

Oklahoma City has a wonderful river walk along what is known as Bricktown Canal.  This is a vibrant area with hiking and bicycle trails, as it heads towards the river and features both water features and nicely landscaped parks.

Canals in a city are a wonderful area to combine nature and inhabitants.  The Venice Beach Canals is another splendid example of this type of scenery. 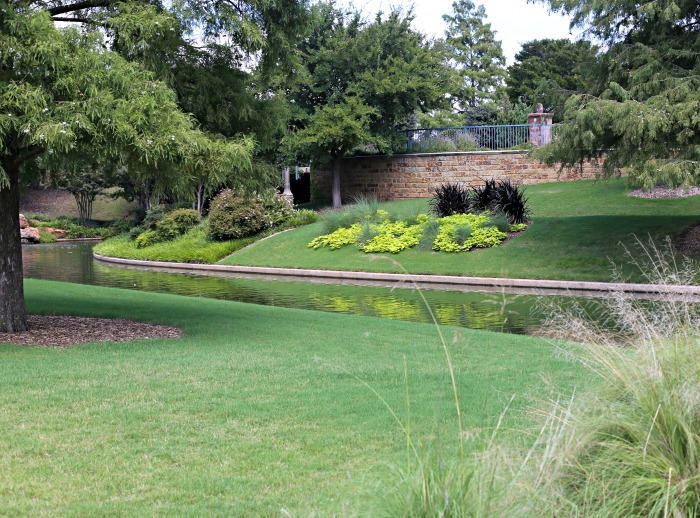 The Oklahoma City riverwalk (also known as the Bricktown riverwalk) is easily enjoyed on foot, but you can also purchase tickets to the Bricktown Water Taxi to enjoy a ride down the canal on a boat with a tour guide. 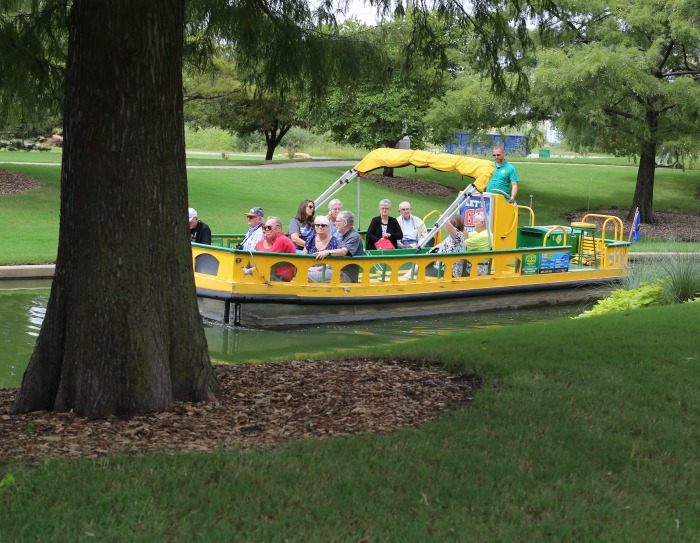 The northern segment of Bricktown Canal extends East from the Santa Fe Railroad. It features restaurants and movie theaters and ends in the Chickasaw Bricktown Ballpark.

It is a good example of converting old industrial space into modern day loft-living accommodation and associated food and drink experiences. 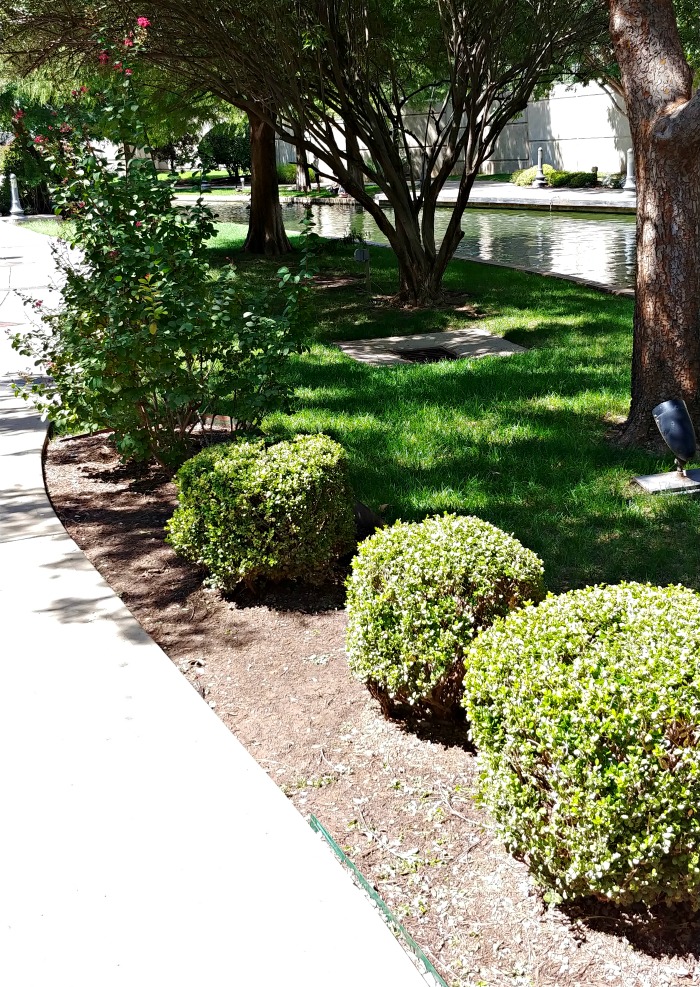 There are shops along the canal and some Bricktown restaurants, but more of these are located in the Bricktown Oklahoma City area itself.

At the southern end of the canal is the Oklahoma City Land Run Monument. Be sure to walk over to see this attraction!

For botanical garden lovers, just 1.7 miles away from the Oklahoma City Riverwalk is the Myriad Botanical Gardens. (one of my favorites!)

Things to do in #OklahomaCity. Visit the Bricktown Riverwalk and the Land Run Monument for a blast of history and nature combined.🐎🌲🌺 Click To Tweet

History of the Oklahoma City Land Run and Monument

The incredible bronze statues in the Centennial Land Run Monument are the world’s largest bronze sculptures. They depict the day in 1889 when 50,000 people rushed into the unassigned lands of Oklahoma Territory to stake a claim for free land.

This period of time is called the Land Rush or Land Run. 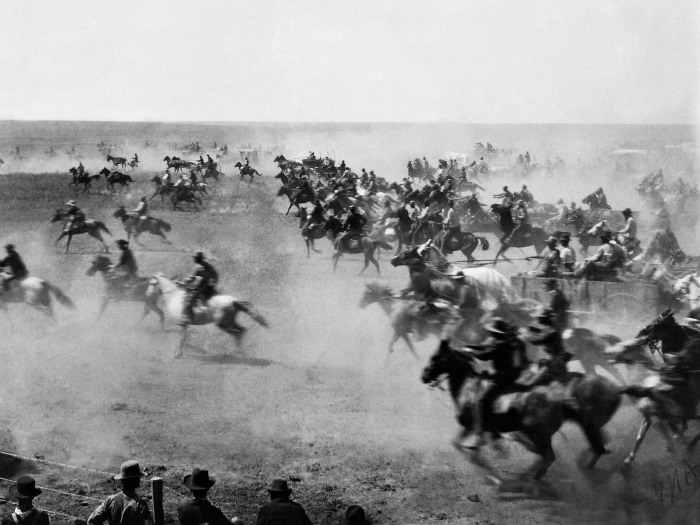 There were over 2 million such acres in Oklahoma, and comprised lots for both farm land and towns.

The sculptures in the Centennial Land Run Monument do a great job of depicting the mad rush for land and showing how many of the settlers did not achieve their dream.

The statues of the Oklahoma City Land Run Monument have incredible detail and demonstrate the original Land Rush of 1889 beautifully. 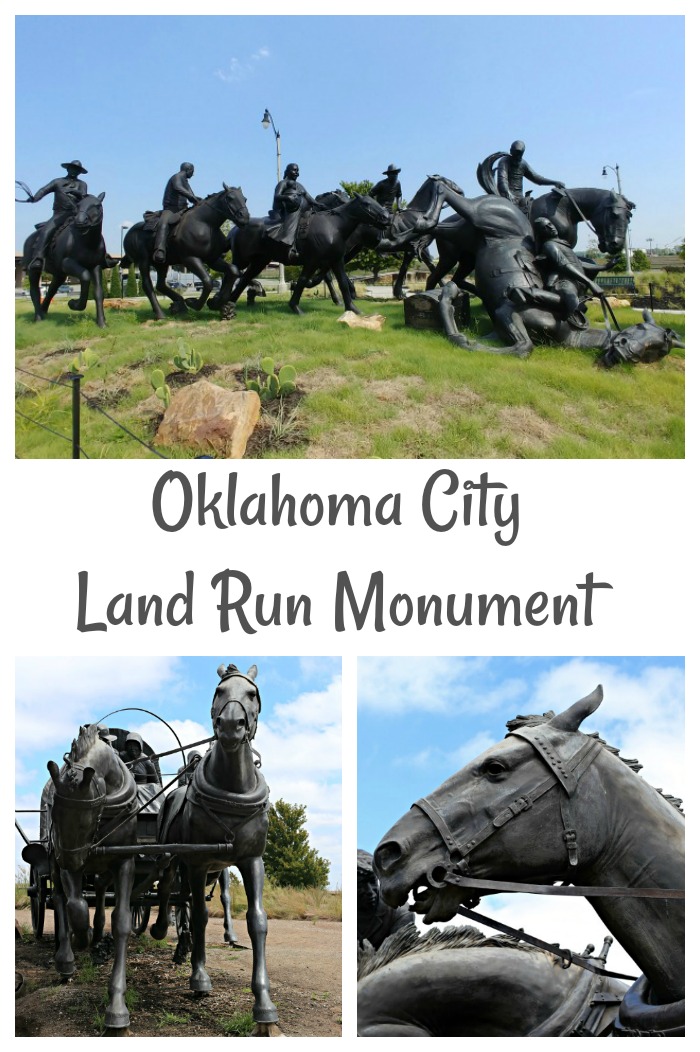 Two statues stand alone to show the start of the Land Rush. One can almost hear the roar of the canon as the land rush got started. 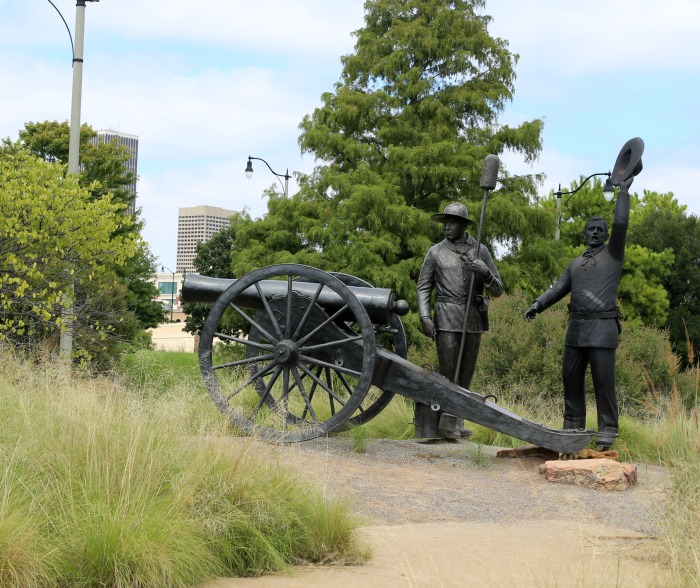 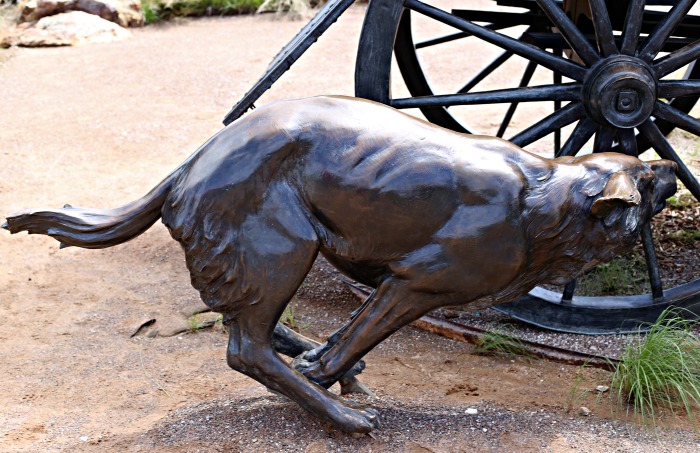 A highlight of the monument shows a parting of the wagon train at the area where Bricktown Canal passes through the park. The imagery describes the feelings of the horses as they shy away from the water. 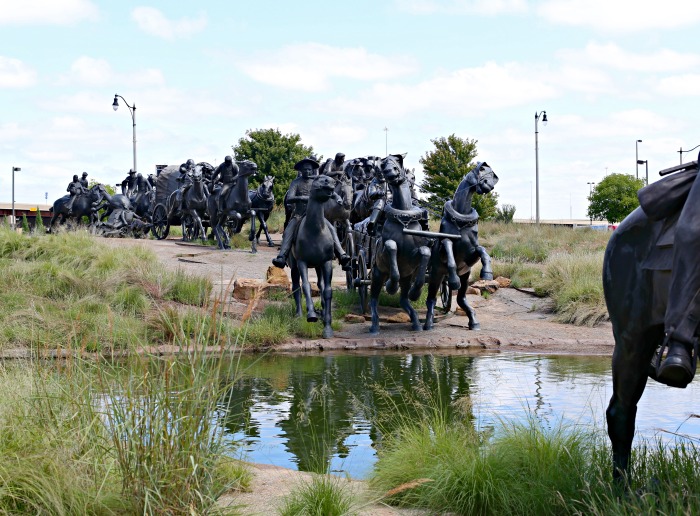 On the opposite side of the canal, the monument continues with a dozen or so more figures and gives the impression that the horses had to jump over the water. 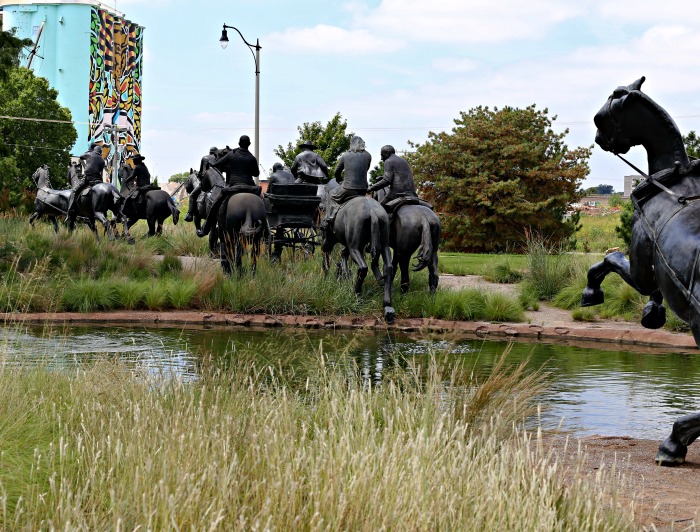 The Centennial land run monument consists of 47 large statues, cast in dark bronze. They are each one and one half actual life size.

38 people are portrayed as well as 3 wagons, a cannon, a dog and 34 horses. There is even a scared jackrabbit in the mix! 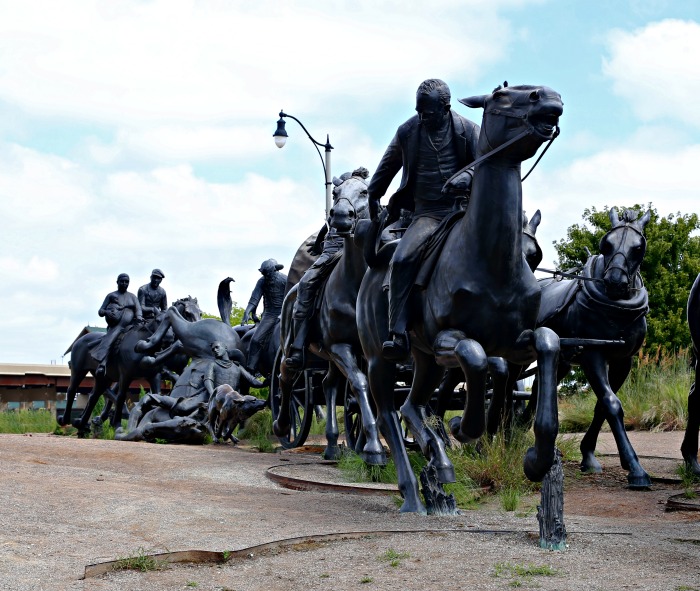 One particularly impression group of statues shows a horse that has fallen down with its rider trying to hold on tight. The emotion is palpable in the image. 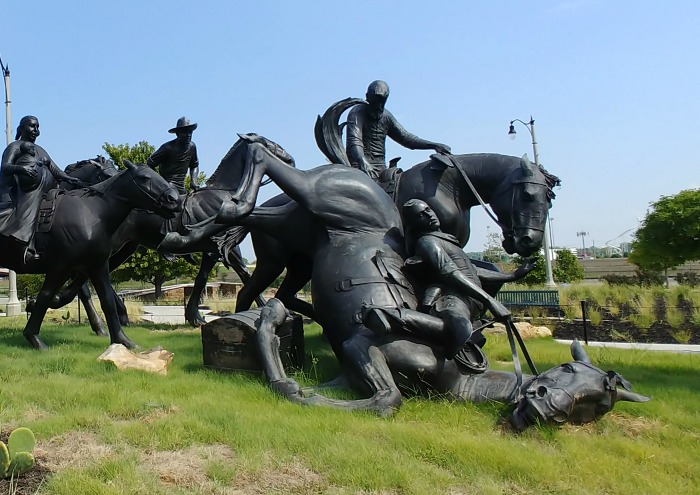 The statues are extremely realistic with fabulous detail and texture. The sculptor of the statues is Paul Moore of Norman, Oklahoma. Moore’s great-grandfather actually participated in the actual 1889 Land Run.

Moore even modeled himself as the wagon driver in the first sculpture in the monument. He is holding on tight! 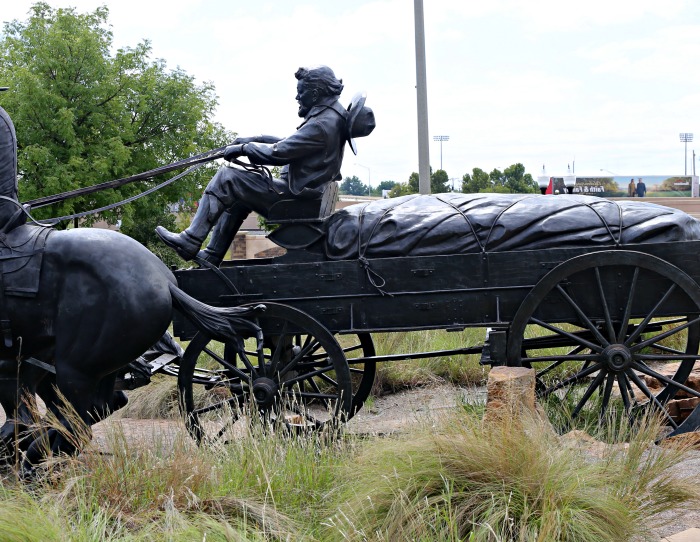 For another place to visit where bronze statues play a big part, be sure to check out my Wellfield Botanic Gardens post. The bronze statues there are incredible, as well.

The Oklahoma City Land Run Monument is located at the southern end of the Bricktown Canal and is open year round to the public.

The park is open 24 hours a day but it is best to view the statues in the day time hours. Admission is free.

If you are in the Oklahoma City area, be sure to set aside some time to walk the River walk and see the Land Run Monument.

You can visit the monument at 200 Centennial Avenue, Oklahoma 73102.

Have you visited the Oklahoma City Land Run Monument?  Please leave your impressions of it in the comments below,

Would you like a reminder of this post for The Bricktown Riverwalk and Centennial Land Run Monument? Just pin this image to one of your Travel boards on Pinterest so that you can easily find it later. 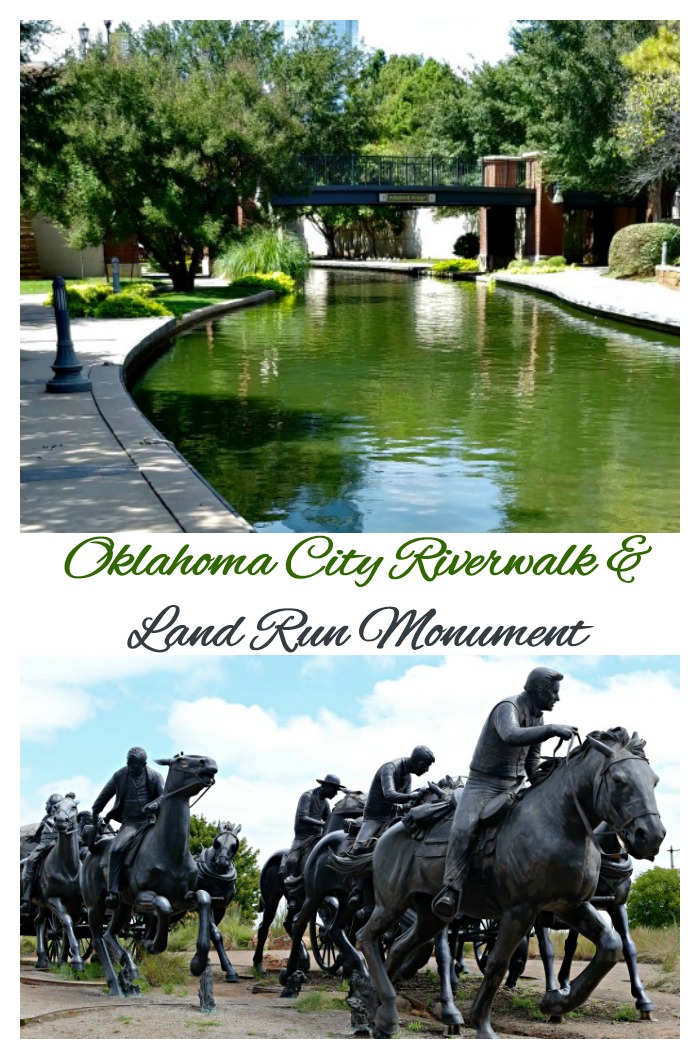