Sicklepod (Cassia Senna obtusifolia) is an annual legume that appears in the spring with yellow flowers and long pods.  It is invasive and can cause havoc in cotton, corn and soybean fields. Read on to get some tips for controlling sicklepod. 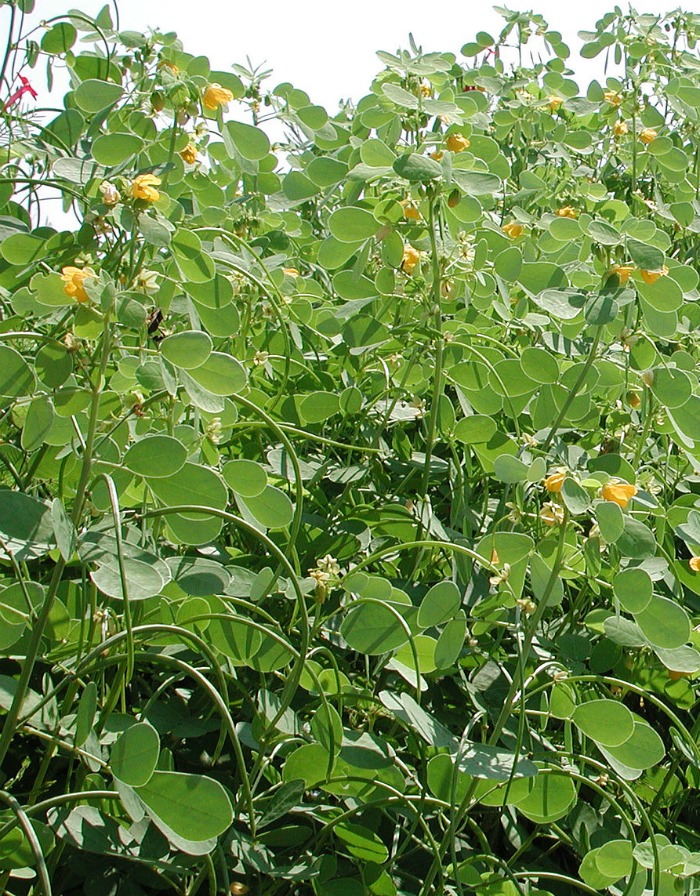 Sometimes plants appear in your garden by way of seeds in new mulch for spring, or by hitchhiking in via birds and other critters. For me, this was the case with some sicklepod plants.

Sicklepod is a semi-woody legume that is native to the American tropics. While the plant is classified as an annual, many consider it a weed because it is invasive and toxic. 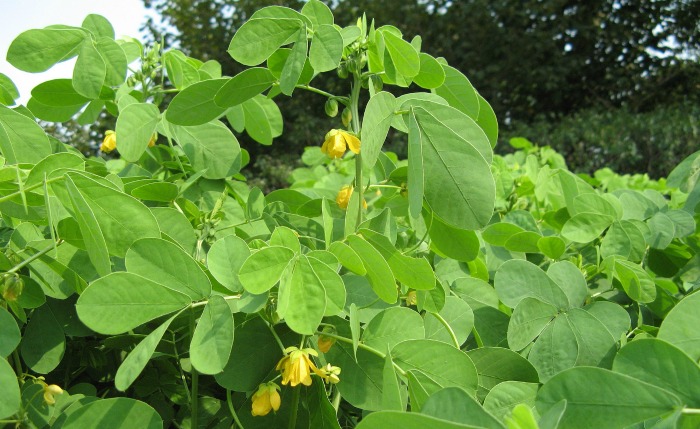 The plant was used by indigenous people as a medicine.

The green leaves of the plant are fermented and this produces a high protein product called “kawal”.  This is often eaten in Sudan as a meat substitute.

The plant is thought by some to produce a laxative effect and to be beneficial to the eyes.

I’m not entirely convinced that having a plant with a common name of arsenic weed would be a good idea!

Sicklepod is considered one of the most difficult weeds to control in soybean fields.  An infestation of it can reduce the yields in these fields by more than 60-70%. 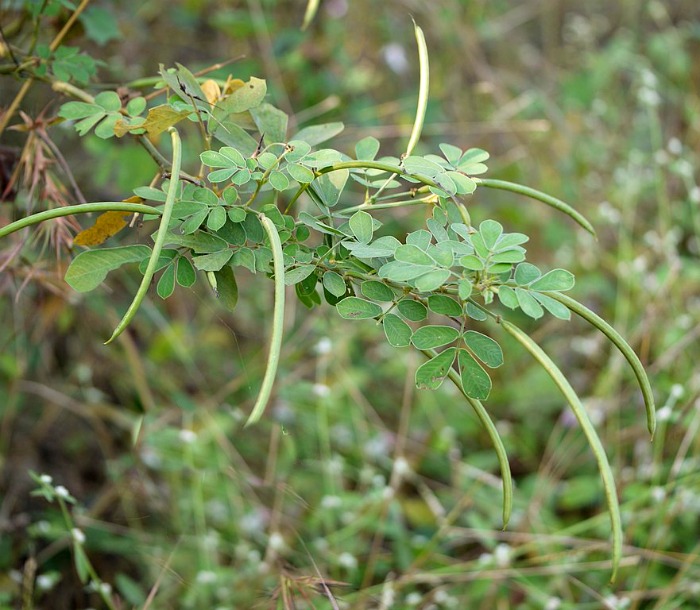 Hairless pale green leaves with twin petals will grown on a stalk that can quickly reach heights of up to 6 feet tall. 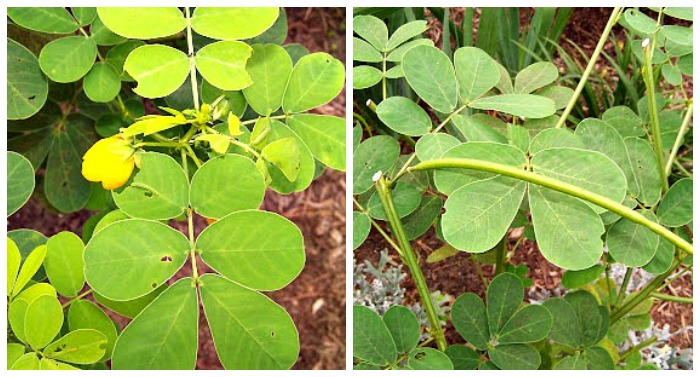 One interesting aspect of the plant is that the leaves close up at night, much like an oxalis plant, and then open again the next day.

The weed can easily be confused with coffee senna – cassia occidentalis. However, the leaves of sicklepod are blunt and coffee senna’s are pointed.

I first encountered sicklepod in my very first garden bed, when a plant appeared that I knew I had not planted. The leaves and tendrils resembled a sweet pea or baptisia australis, but was much faster growing.

I soon learned that this hitchhiker plant was not a desirable addition to my garden bed and needed to be removed before it decided to take over the surrounding space!

In addition to sicklepod being invasive, it is also known to be toxic to livestock. It affects their liver, kidney and muscle functions.

In addition, straw and hay that has been gathered from pastures that contain sicklepod cannot be used for livestock, since it will be contaminated with the crotalaria toxins in the plant.

Cattle and swine, as well as chickens and horses, are most commonly affected by sicklepod’s toxicity, but dogs and cats can be affected to a lesser degree.

(Many plants with otherwise appealing traits can be toxic to pets.  Check out my article on dieffenbachia to read about its toxicity.) 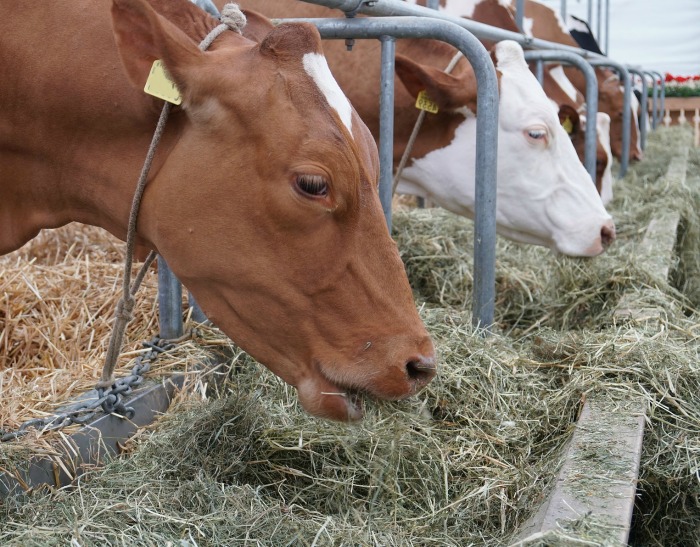 All parts of the plant from the stems and leaves, as well as the seeds and flowers, contain toxins. Poisoning occurs when the green plant, dried seed from harvested grain or contaminated hay are consumed.

The plant can be tough to get rid of.  It’s touch and will grow in even very poor soil.  The plant is also resistant to most plant diseases and quite drought tolerant.  Because of its toughness, controlling sicklepod can be somewhat difficult.

The best way to control sicklepod is to not let the weed get established. If you enter an infested area, clean your shoes, clothing and equipment so that it does not spread.

Be careful when buying mulch.  Find out, if you can, where it came from.  It is not unusual to have a whole host of new weeds (not just sicklepod) from contaminated mulch.

However, if you find it in your garden, you can remove it manually by pulling or digging it up.  Be aware that sicklepod has a very long tap root and the entire root must be removed, or it will grow back. 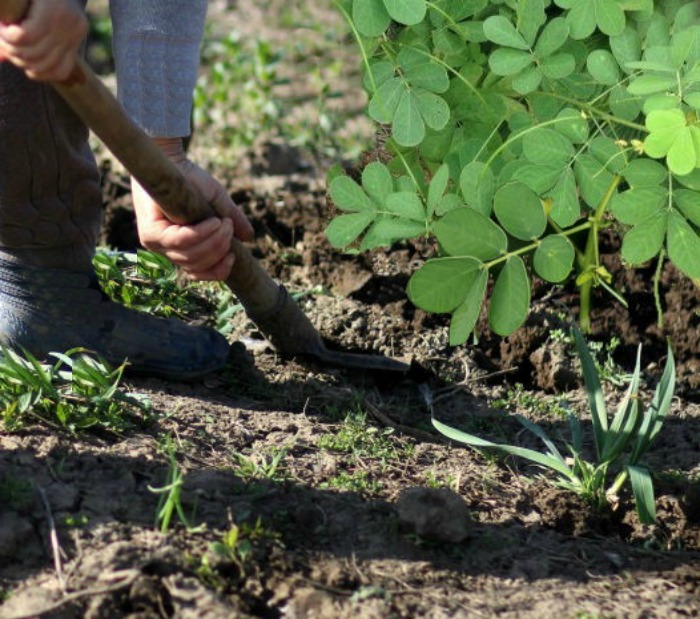 One also needs to be careful of mowing over sicklepod, since this usually results in seed spread, making the problem worse. If you are not careful, you’ll have a truly invasive plant on your hands.

Liriope is another invasive plant that can take over a garden space. See my tips for controlling monkey grass here.

For larger infestations of sicklepod, eradicate with post-emergent herbicides. Herbicides with an active ingredient of 2,4-D works well in eradicating Sicklepod weeds in infected pastures.

For large farming concerns where the the plant has become a problem, this article will give some helpful tips for controlling it.

Have you run into this plant in your garden?  How did you control it?

Would you like a reminder of these tips for controlling Cassia Senna obtusifolia? Just pin this image to one of your gardening boards on Pinterest. 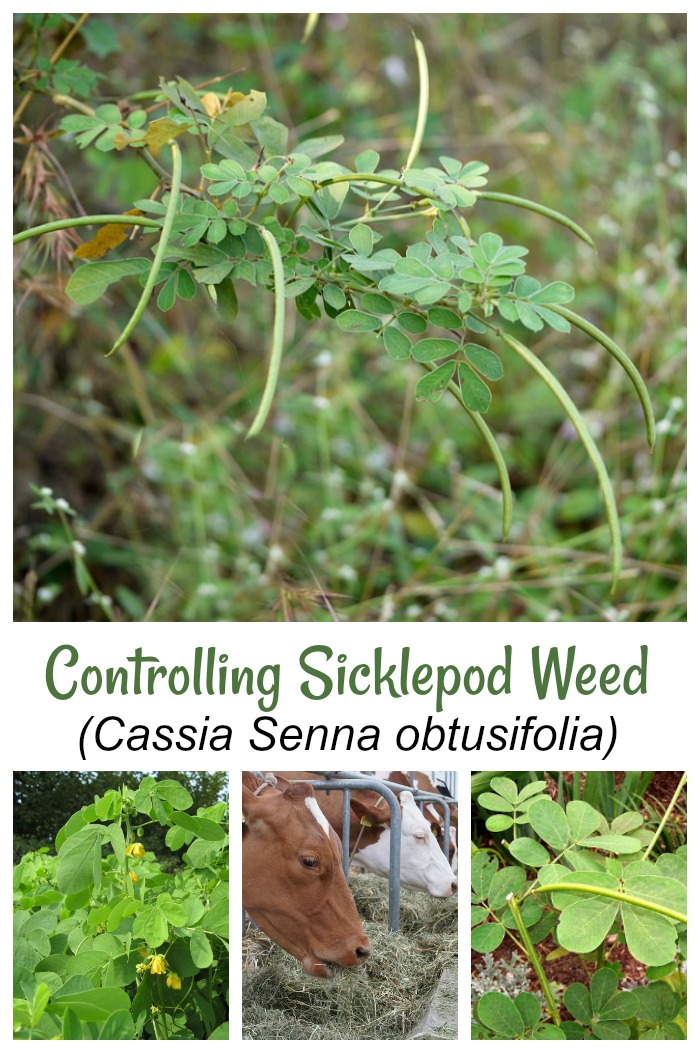 Admin note: This post for controlling sicklepod first appeared on the blog in January of 2013. I have updated the post with new images, much more information about the weed and tips for controlling it.

I cleared 3 acres of pine trees to make a pasture for my goats. I bought plot mix that is for deer and several types of grasses.i dont know if the cassia seed was in some of those seed mixes but my field is completely taken over. I spend 2 to 3 hours daily in the Georgia 95 degree heat pulling this nasty plant before it can flower and spread through seeds. There are millions of them. Will it grow only from seed or will the roots last over the winter and grow ?

In my experience, as long as I get the tap root out, it doesn't grow back.

I think it's called Cassia. http://www.colorcountrynursery.com/perennials.html

HI Cathy, Thank you for the name. I had figured it out a while ago and added it to the article. I've been finding more of them this year. Apparently it is quite invasive.