I love watermelons. They are sweet, juicy, messy to eat, and remind me of summer like nothing else does. Did you know that there are many watermelon varieties which you probably haven’t even heard of?

How many varieties of watermelon are there?  More than 50 watermelon varieties are grown around the world. Because of the large number of types of watermelon, they are often group by characteristics such as shape, size and color of the fruit.

The are also grouped by whether they have seeds, or are seedless.

The watermelon varieties may look similar before you cut them, but the fruit, color, shape, and number of seeds can vary a lot. 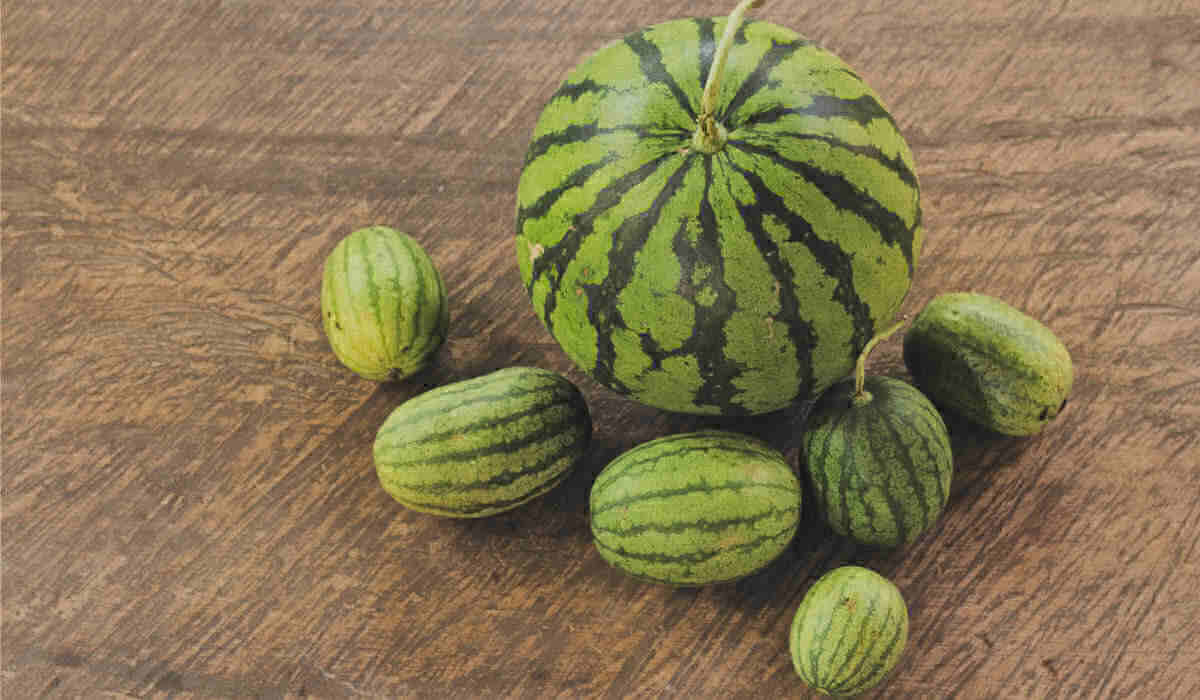 Summertime is watermelon time and we've got you covered. From square and heart shaped watermelons, to those with yellow flesh, there are over 50 varieties of watermelons grown around the world. Find out about them all on The… Click To Tweet

If you like the taste of fresh watermelons, you’ll love my new recipe – raspberry watermelon lemonade. It is a hydrating drink that the whole family will enjoy.

Most of us think of watermelons as being oblong shaped with bright red flesh and seeds but watermelons can have light pink, yellow or even orange flesh. And it doesn’t stop there!

There are even heart shaped watermelons and  square Japanese watermelons. These unusual shapes are made by placing small watermelons into shaped boxes, so that they adapt the shape of the box as they mature. 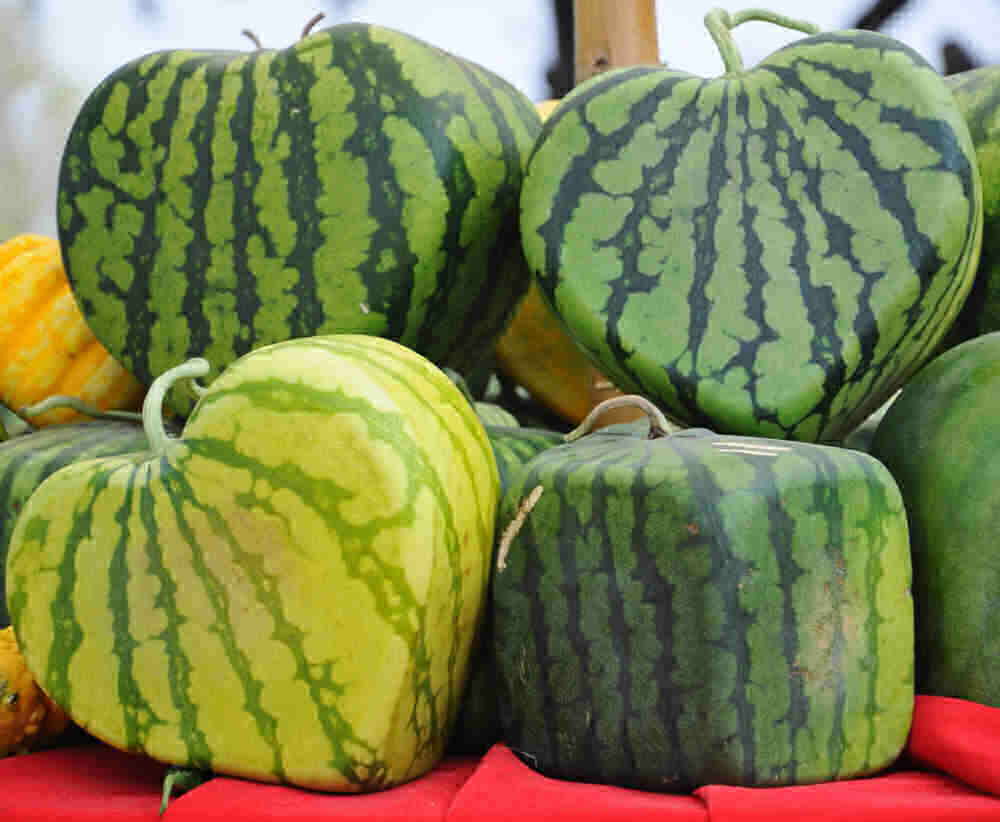 The size of watermelons can also be different – with melons ranging from small miniature varieties to monsters that weigh over 200 pounds and win medals at the state fair.

Here are the most common watermelon types.

For what seems to be a relatively common fruit, watermelons are actually quite varied.

The outer skins of watermelons can look quite different. Let’s see how they are different.

Colors of the fruit of watermelons will vary. There is a dark green type with lighter stripes on the rind and the colors can reverse completely to light rind with dark stripes. Watermelons with yellow rinds are always a surprise to find. 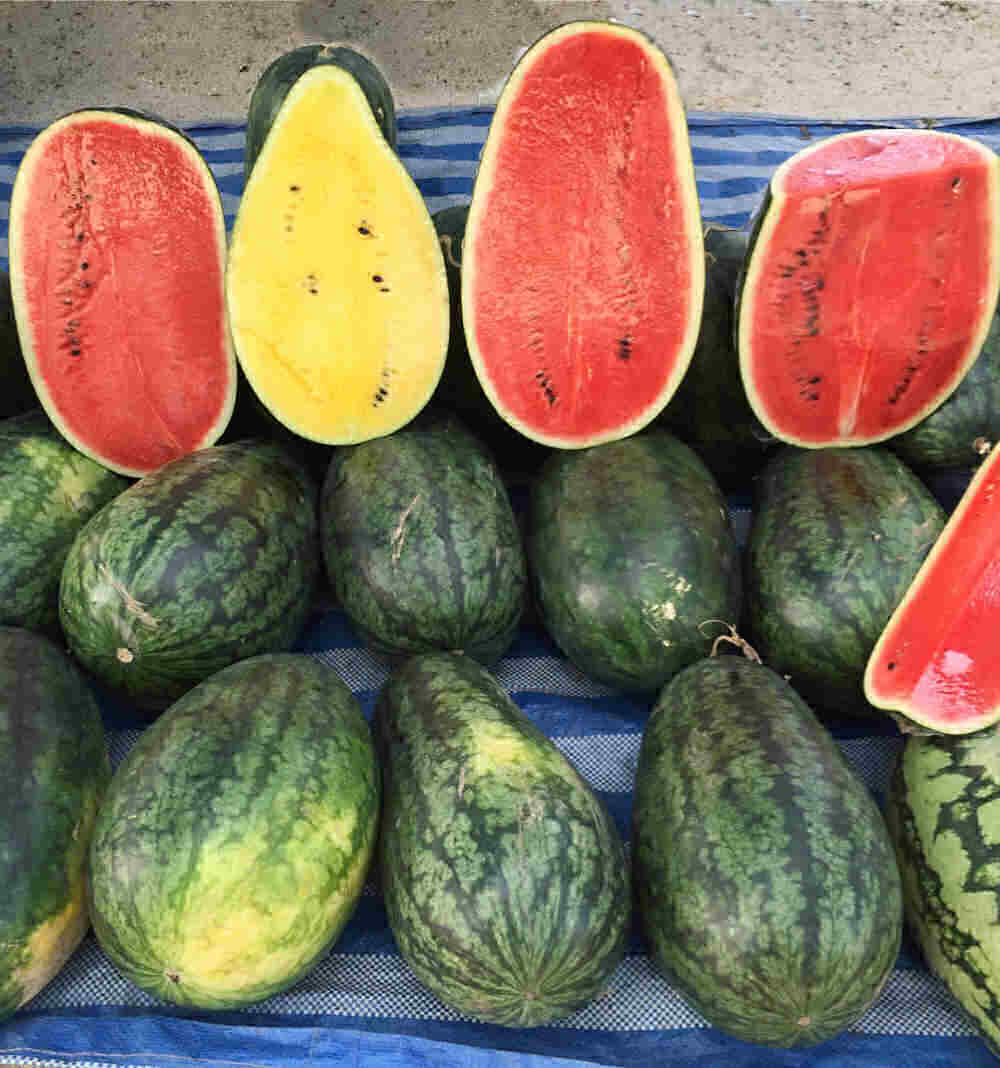 Most of us are familiar with the reddish pink flesh that has black seeds, but many other colors of flesh are available – from pale yellow to peach, pink and deep red.

Watermelons can be divided into four categories: picnic watermelons, icebox watermelons, seedless watermelons, and the yellow-orange flesh watermelon varieties. Let’s find out more about each type.

These watermelons are the ones I remember growing up.  They come in both round shapes and also the long, oblong type that is so popular at picnics.

Seeded watermelons range in size from 5 to 45 pounds. 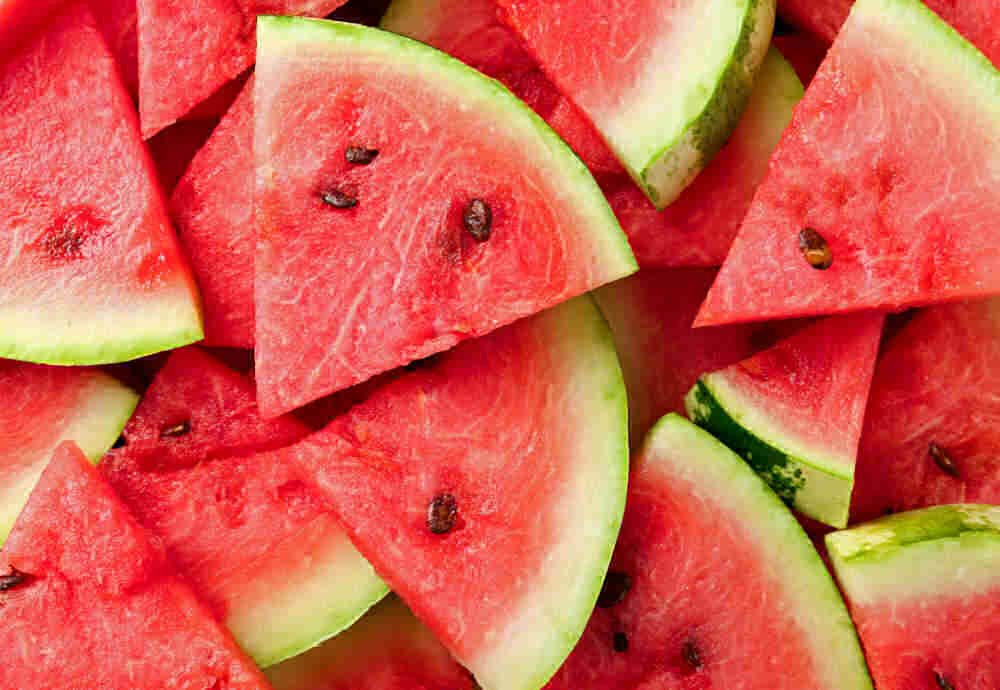 Seeded watermelons can also be part of both the icebox and picnic varieties. The term applies just to the fact that they have seeds in them.

One of the common characteristics of many watermelons used to be that they had seeds,  However, since the 1990’s, this is not the case.

Breeding of watermelons over the years has resulted in watermelons that are very sweet but don’t have seeds. This type of watermelon revolutionized our buying habits and now seedless is the type that most people want.

Of course, we can’t have a watermelon seed spitting contest with this type of melon but that is a small price to pay for the ease of eating them! 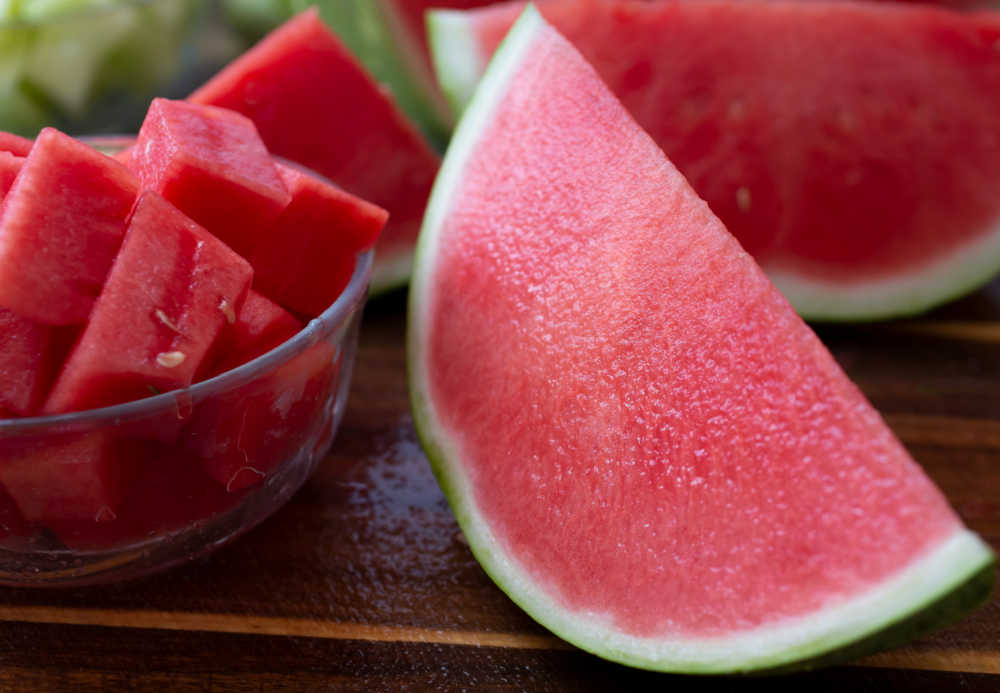 Seedless watermelons are both round and oblong in shape. They weigh up to 25 pounds.

Seedless types are not truly seedless. You will see white seed coats in the flesh of seedless watermelons, but they are undeveloped and edible.

Seedless watermelons account for about 85% of the watermelons grown today. It appears we no longer enjoy seed spitting competitions!

It appears that there are no seeds on seedless watermelons. But look again! You may find some traces of white seeds. They are edible.

As the name suggests, icebox watermelons are so named because of their size. They range from 5 to 15 pounds. This size makes them the perfect watermelon to keep in the fridge. 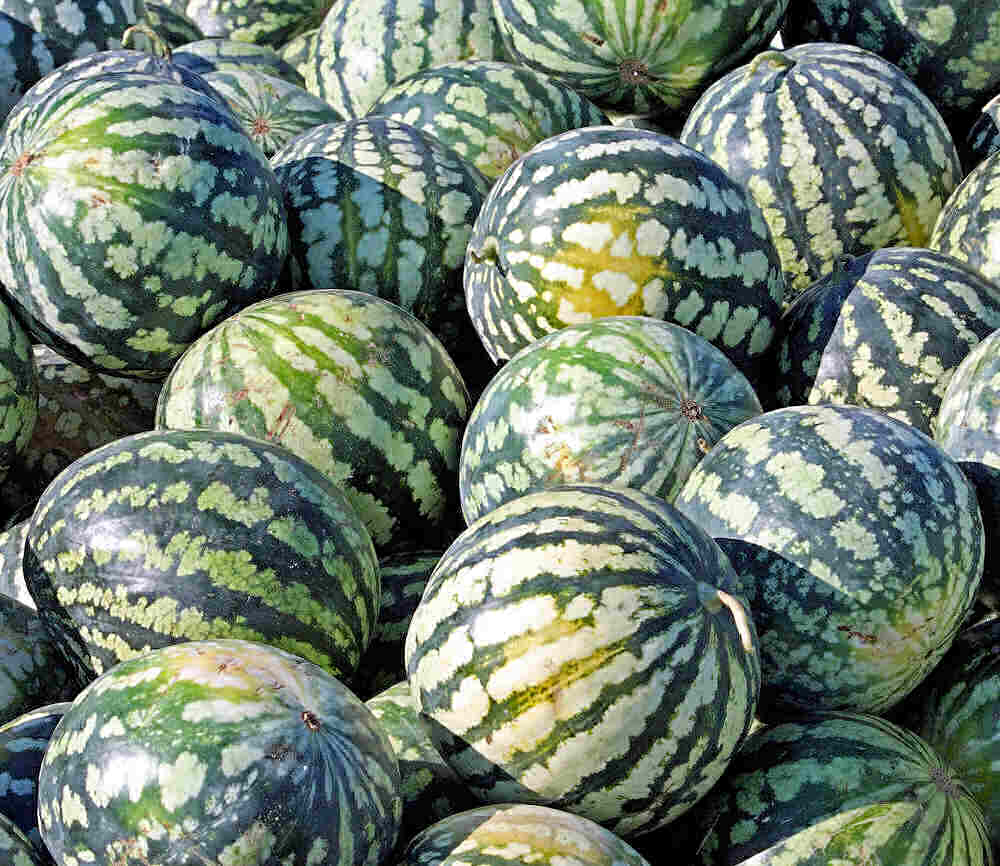 Breeders grew them to feed a small family instead of a big crowd. The most popular icebox watermelon is Sugar Baby which grows to about 9 pounds.

If you are planning to feed a crowd, get a picnic watermelon. These big guys weigh in between 15 and 50 pounds. This is the watermelon most of us remember from our childhoods.

It’s the perfect watermelon for a 4th of July barbecue. 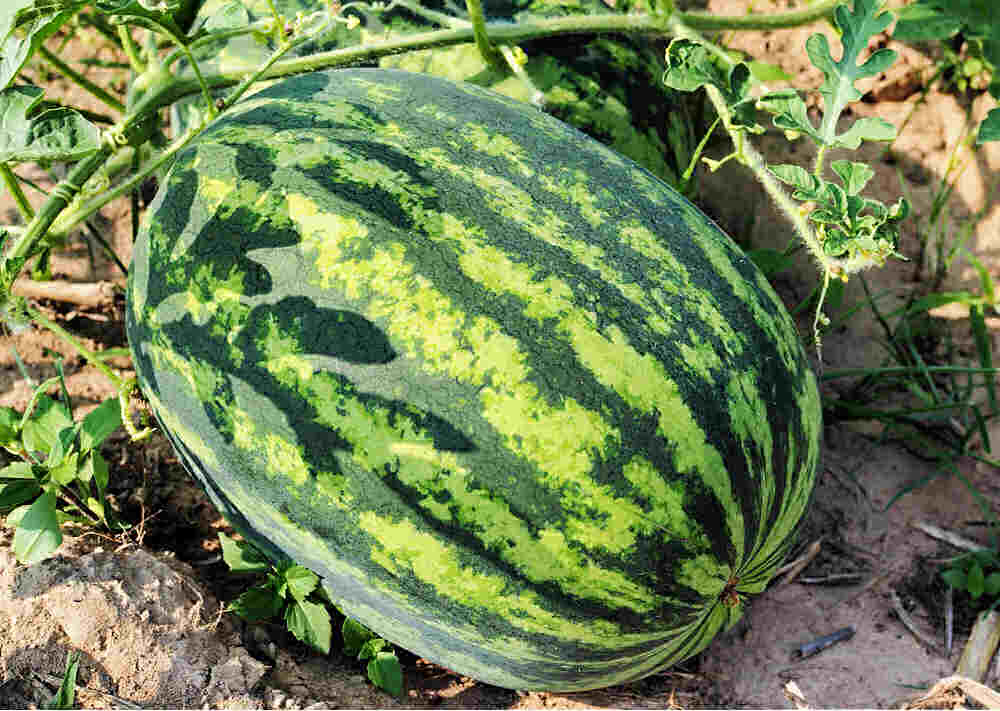 They are generally oval shaped, (but can also be round) and have a bright green rind and deep red flesh.

Some common varieties of the picnic watermelon are Charleston Gray  (30 pounds), Crimson Sweet (30 pounds) and Black Diamond (up to 75 pounds.)

Picnic watermelons have long maturity times because of their size.

The heaviest watermelon weigh in at around 350 pounds and holds a record in the Guinness Book of World Records. Now that’s quite a picnic!

Standard watermelons require quite a bit of gardening space because of the spreading nature of their vines. Miniature watermelons can be grown in much smaller backyards. 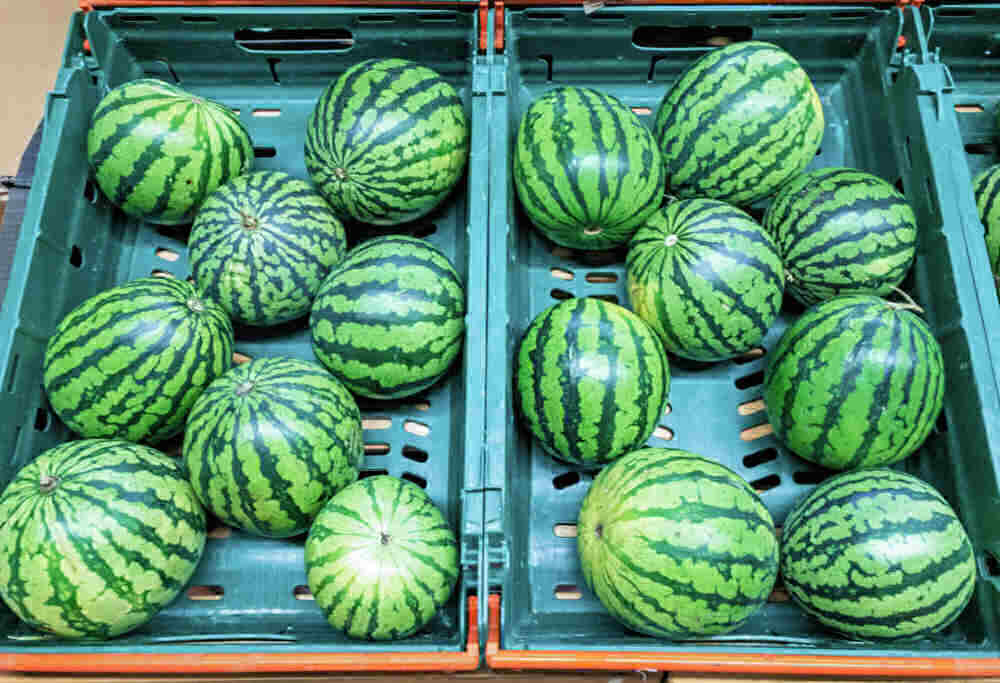 Mini watermelons are round in shape, but their size is much smaller than the big picnic types of watermelons. They can be as small as 1 pound and up to about 7 pounds.

The rinds are dark green with light green stripes and the shape is either round or slightly elongated. Mini watermelons are seedless.

Most miniature watermelons are about the same size as a large cantaloupe. They are sweet and crisp and very juicy. Their flesh runs from pale pink to deep red.

These small watermelons are seedless and perfect for storing and eating when there are just one or two of you who plan to indulge.

There is even a fruit known as a cucamelon, or mousemelon. It is a Mexican fruit that looks just like tiny picnic watermelons. A whole pile of them can fit into your hands! 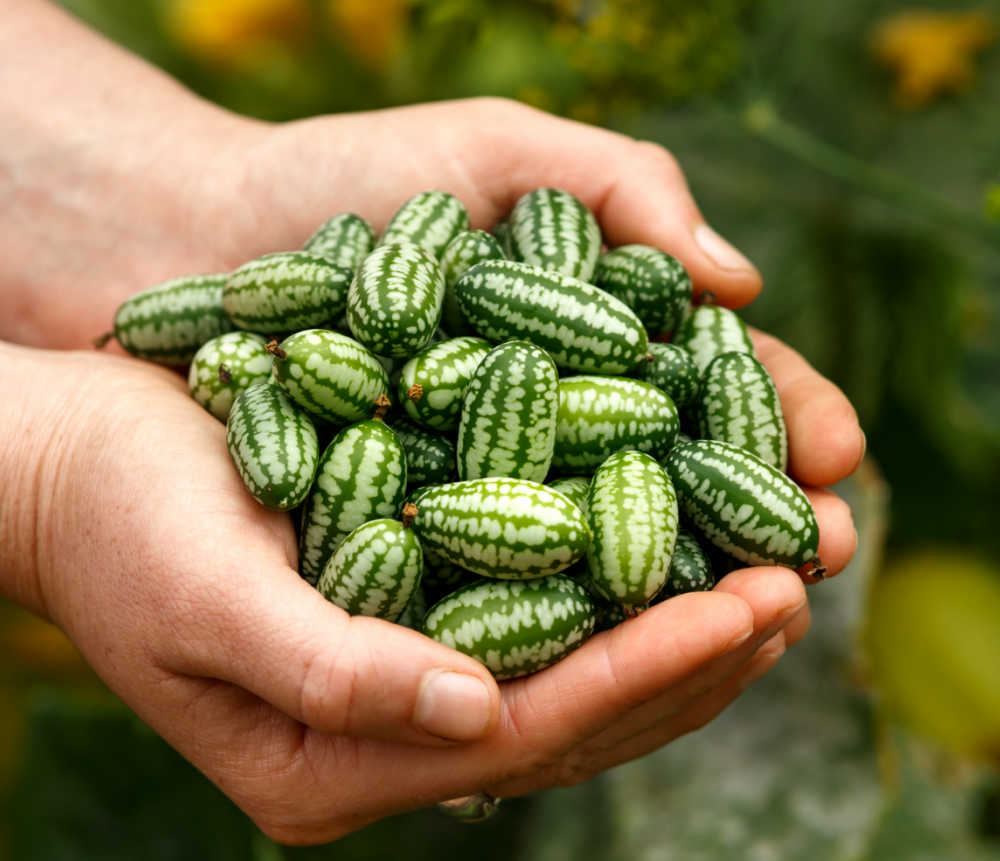 The look is where the similarity ends, however. The taste of a cucamelon is something like cucumbers, with a slight sour and lemon flavor.

When you cut into these watermelons, you will discover flesh that ranges from yellow to orange in color. This commercial variety originated in Africa.

It has a sweeter flavor which is quite honey-like compared to the melons with red flesh, but the nutritional benefits are similar.

These colorful watermelons are round in shape and can range in size from 10 to 30 pounds. They can be both seed and seedless types.

Common types of yellow or orange watermelons are Honeyheart, Tendergold and Yellow Doll. 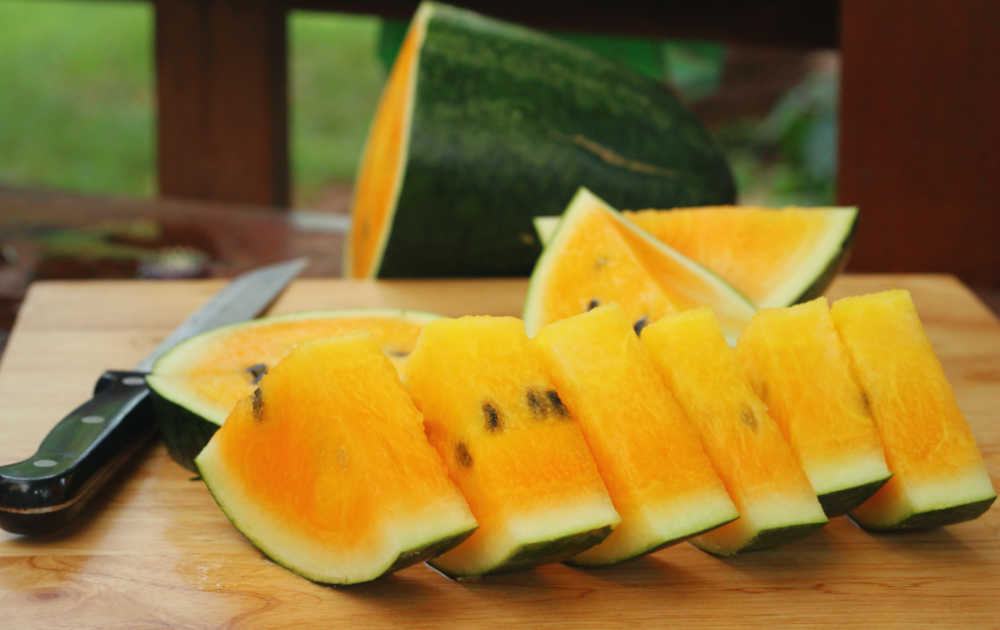 Now that we have learned about the watermelon varieties let’s brush up on some fun tips to make sure your watermelon grow well. 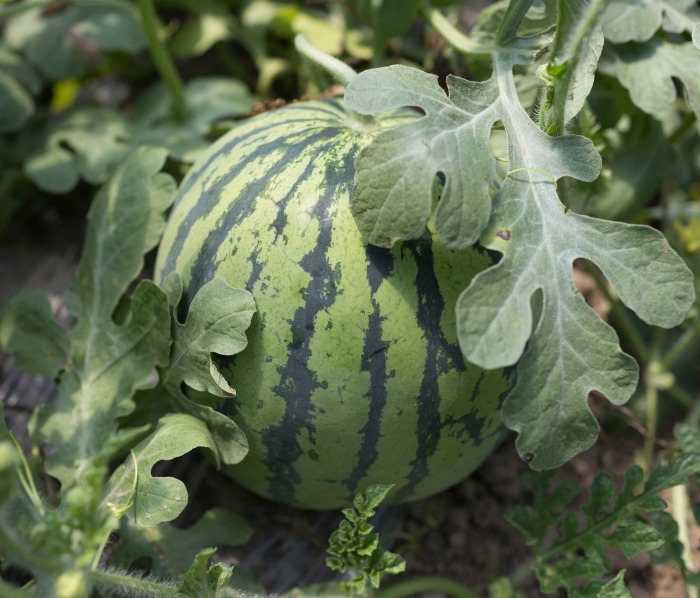 I’ve heard that trimming the vines will make the watermelon ripen up what is there and the fruit will be bigger and better.

There does appear to be some truth to this statement.  Pruning the vines promotes bushier and healthier vines. Removing dead vines and melons that are not growing well will let the plant focus its energy on growing bigger, healthier and juicier melons.

One does need to be careful with pruning vines, however.  If you cut off the flowers that are growing, this could affect pollination.  (Watermelons need both male and female flowers in order to set fruit.)

Trimming off too many of female flowers might mean their will be less blooms for cross pollination and therefore less fruit. 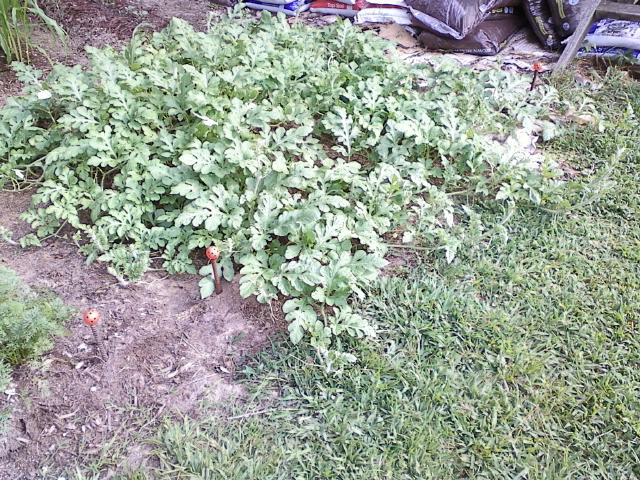 Why use aluminum foil under watermelons?

The silver aluminum foil is supposed to keep the melons from bugs and soil based problems, and is said to help with ripening.

I also like using it because I can see where the watermelons are when I approach the patch. 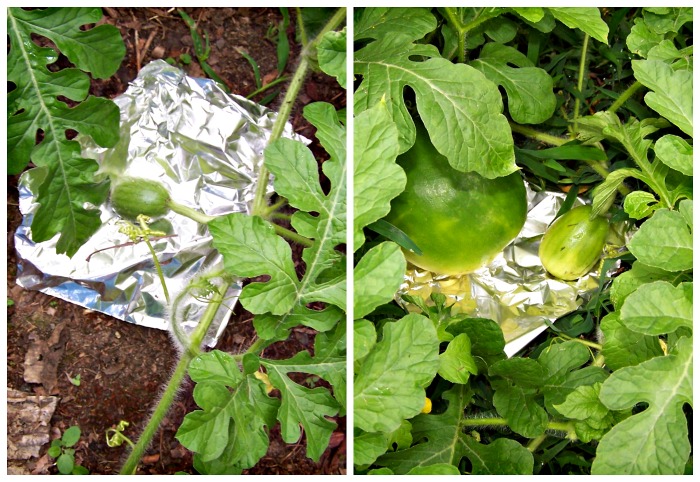 Doing this trick increases the warmth for the developing fruits and also their sun exposure – this helps to speed up days to harvesting a little bit and (supposedly) can increase the sweetness of the watermelons.

It is not only humans that love the taste of watermelons, squirrels, chipmunks and raccoons do, too. 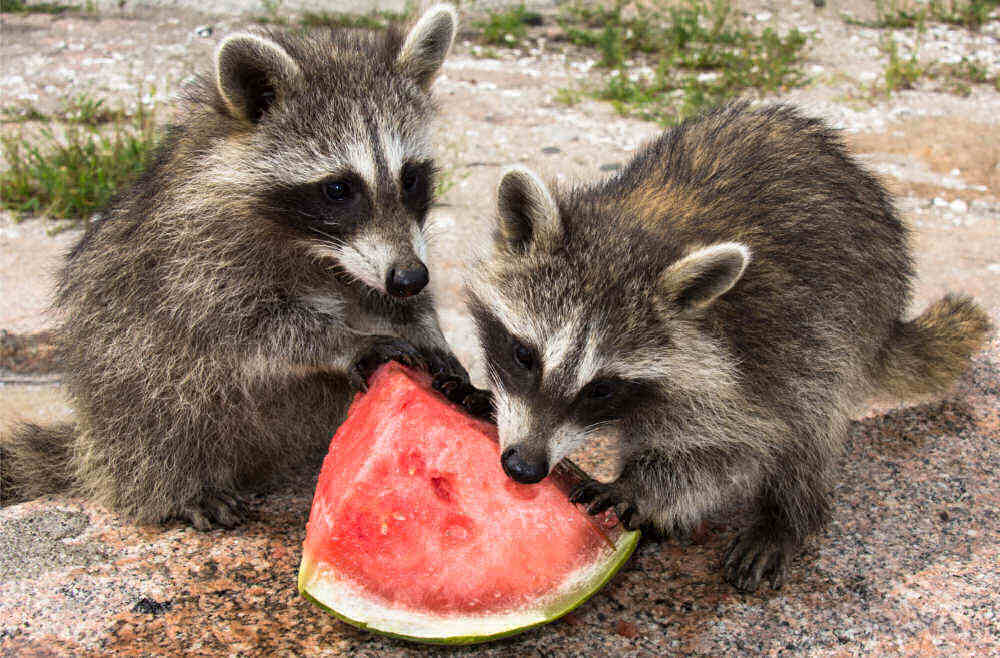 Protect your maturing fruits by covering them with laundry baskets weighted down with rocks. The openings in the mesh will allow sun in but will hopefully keep the critters out.

How to tell when a watermelon is ripe

Watermelons, by nature, lie on the ground in one spot as they mature and their bellies change color. This can be an indication of ripeness.

As the plant gets closer to the time for harvesting it, the underbelly will change from green to a creamy white or yellow color (depends on the variety). IF the spot is very white, leave it to mature a bit longer. 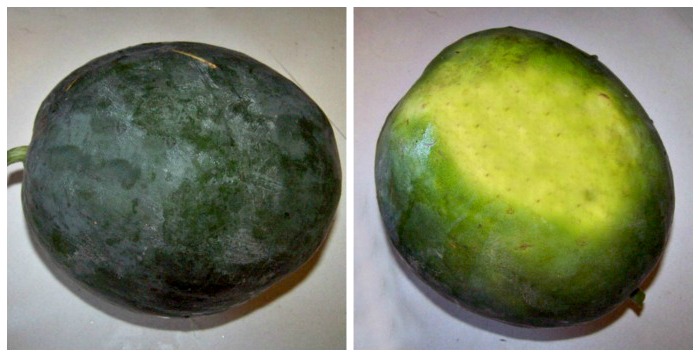 Watermelon stems also change from green to tan and brown as the melon matures. If your melon’s stem is bright green, it definitely needs to grow more.

Finally, A shiny rind can indicate an unripe melon, while a dark rind indicates more ripeness.

Check out this post for more tips on figuring out when to harvest your watermelons.

This chart shows several things to look for when choosing a watermelon. 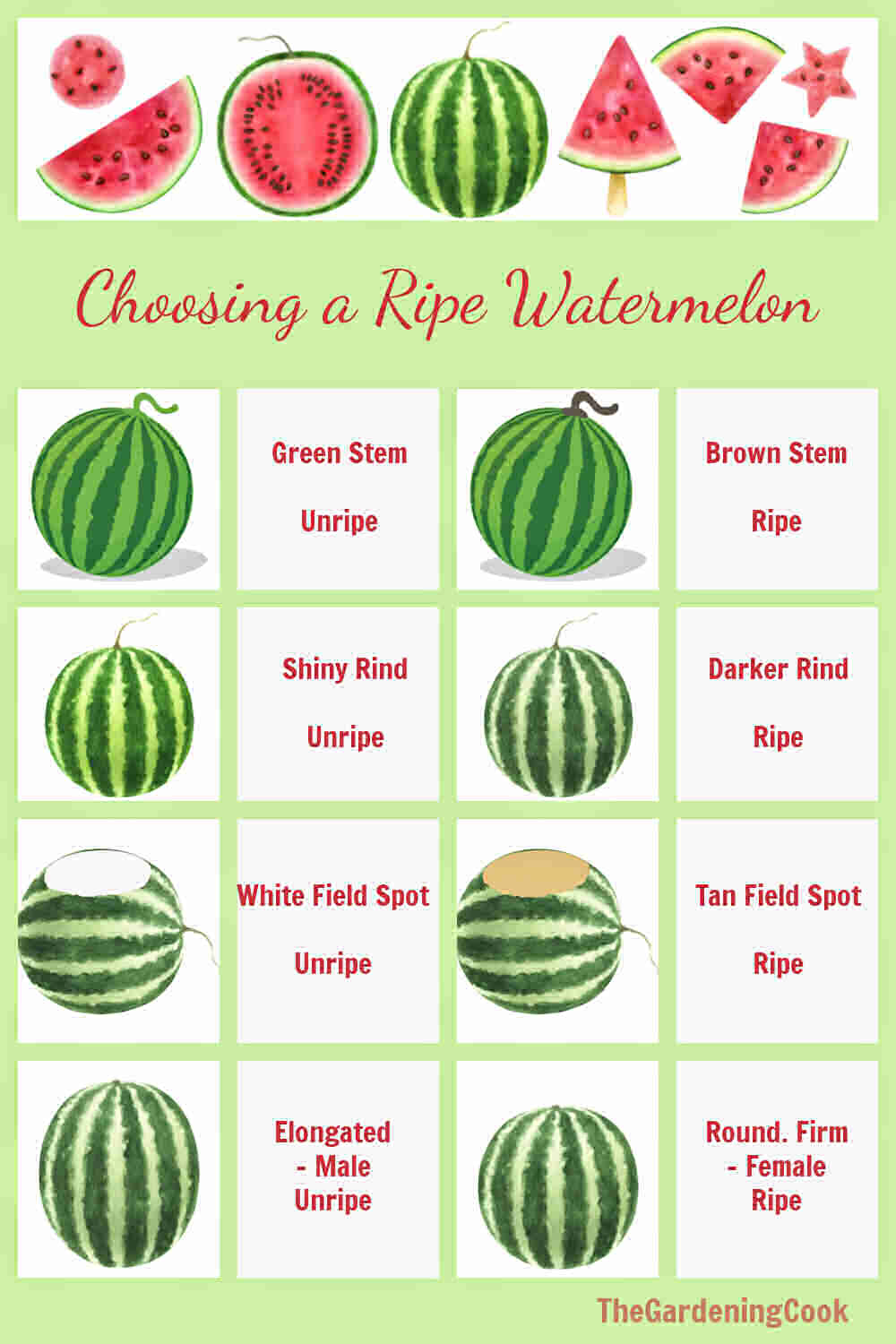 Pin these watermelon varieties for later. 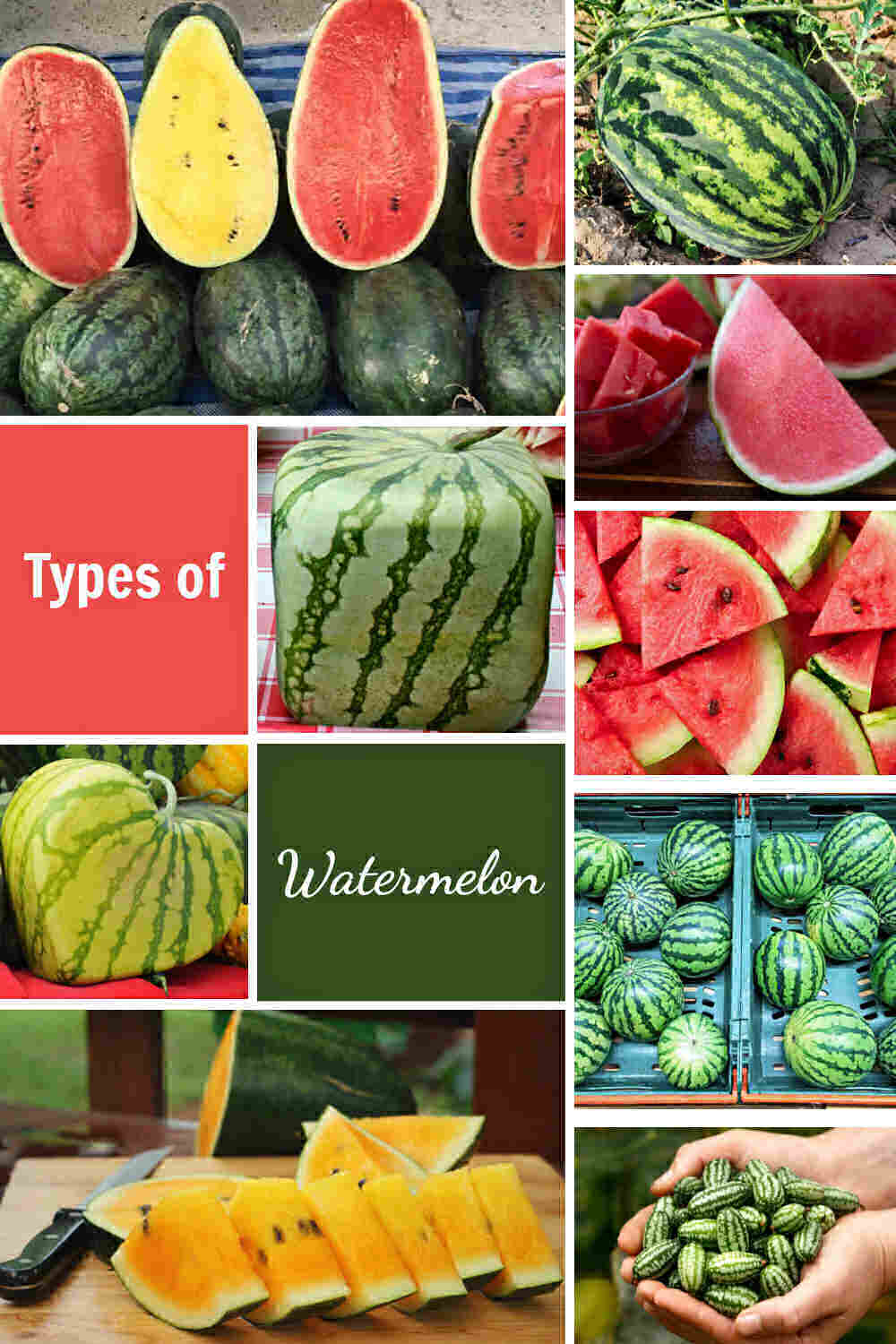 
Admin note: This post first appeared on the blog in August of 2012. I have updated the post to more info on the types of water melons, all new photos, some useful growing tips, a printable and a video for you to enjoy.

It's a nice and precise write-up. There are many types and maybe a few hundred thousands of commercial names of watermelon around the world. To simplify the types, could we say at the first segregation 3(Three) types: 1. CRIMSON SWEET(all stripes) 2. CHARLESTON GRAY(all light green) and 3.SUGAR BABY(all black or deep-dark green)? Then it may go Round, High round, Oblong, Square, Deep Stripe, Light Stripe, etc.