If you like growing indoor plants that have an exotic look, why not try growing Sago Palms?. This plant makes a great choice for those new to houseplants since it prefers drying out before you water it again.

A sago palm tree – Cycas revoluta – is easy to grow indoors as long as you keep a few care tips in mind.

In the US, unless you live in the warmer zones (8b and higher) the sago palm is grown as an indoor plant.

The common name of this plant seems to indicate that it is a palm, but sago is actually a cycad – Cycas revoluta is the botanical name.  Cycads date back to the Mesazoic era and used to be found pretty much world wide.

Today, the native homes of sago palms are limited more to tropical and subtropical areas. This makes them ideal house plants but more challenging to grow outdoors unless you live in the temperate zones.

While a sago palm will tolerate lower light conditions, it does best with bright light indoors. An average temperature of 65-75 degrees F. works best since these plants are tropical in nature.

Don’t place your palm tree too close to the glass of the windows and protect it from windows that get a lot of sunlight. Rotating the plant every few weeks help to keep the plant growing straight and not reaching for the light. 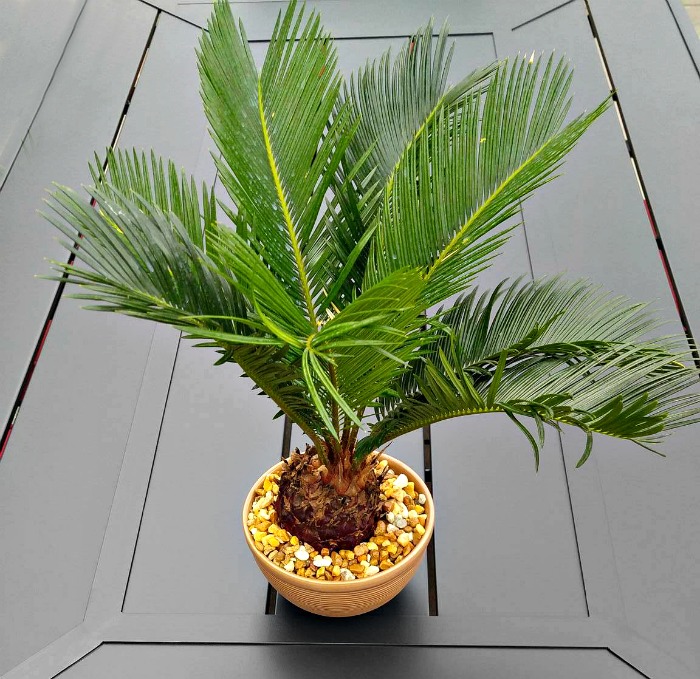 Sine the fronds have a drooping growth habit, be sure to place a sago where it won’t be crowded by nearby plants. It makes a great table plant if the light is bright enough.

Be sure not to over water a sago palm.  This can encourage the whole root to rot and you’ll end up with a dead plant.  This actually makes it great for beginners who often forget to water, since the plant likes to dry out a bit between each watering.

I like to think of the sago palm as needing the same watering requirements as cacti or succulents. I let it dry out a little between watering and mine does just fine. 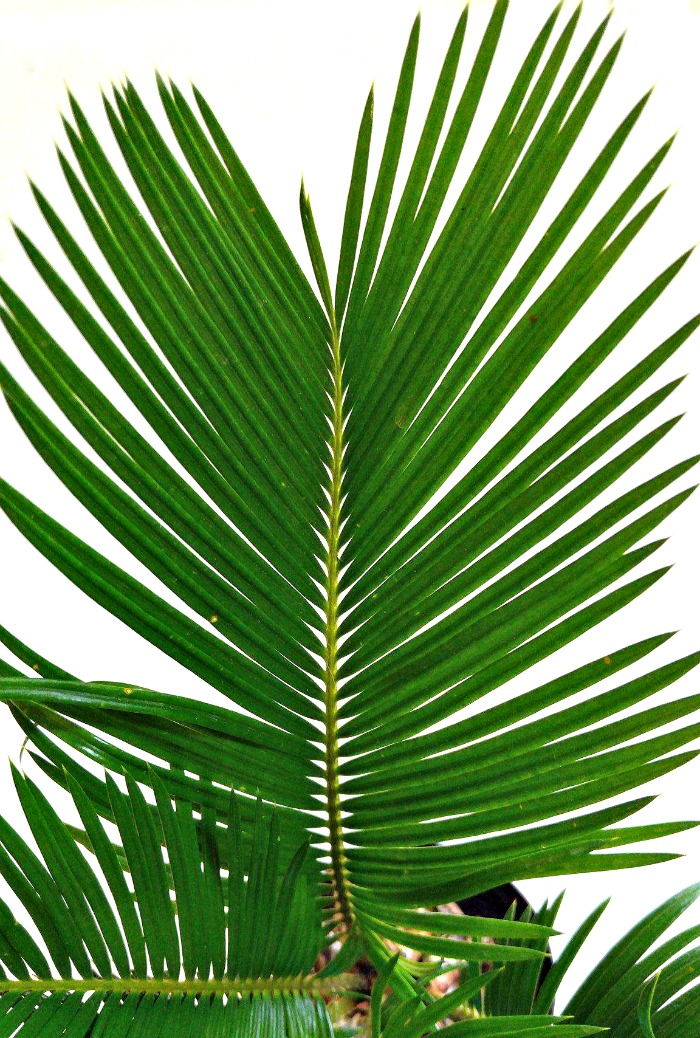 A sago palm has thick and sharp fern like fronds.  They need to have any yellowing or dead fronds trimmed regularly. The plant also has somewhat of a bulbous base which adds to its appeal indoors.

Prune away any stalks close to the trunk of the plant with a set of clean and sharp pruning shears. If you leave the dead fronds, the plant will send its energy there instead of directing it to the new growth that is more healthy.

If you grow sago palm outdoors, be aware the the tips of the fronds are razor sharp and watch for animals and children around the tree. It is a good idea to wear safety gloves and protective eye wear when pruning the tree. 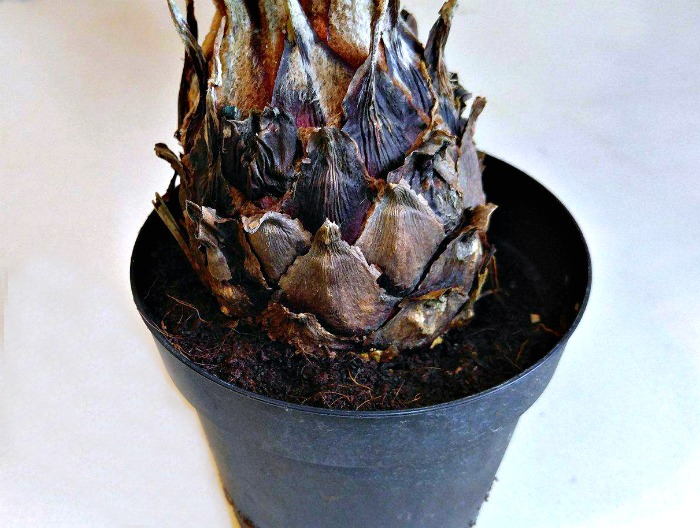 Sago palms like a soil that drains well and is slightly acidic (5.5-6.5)  Apply a slow release cycad fertilizer that is meant for ferns, palms and cycads. Fertilize regularly during the spring and summer and don’t fertilize in the late fall and winter months.

Check the root ball of your sago palm in the spring when new growth starts to see if the plant is root bound.  If it is, choose a container about 2 inches larger than your current one and add new soil to the container. 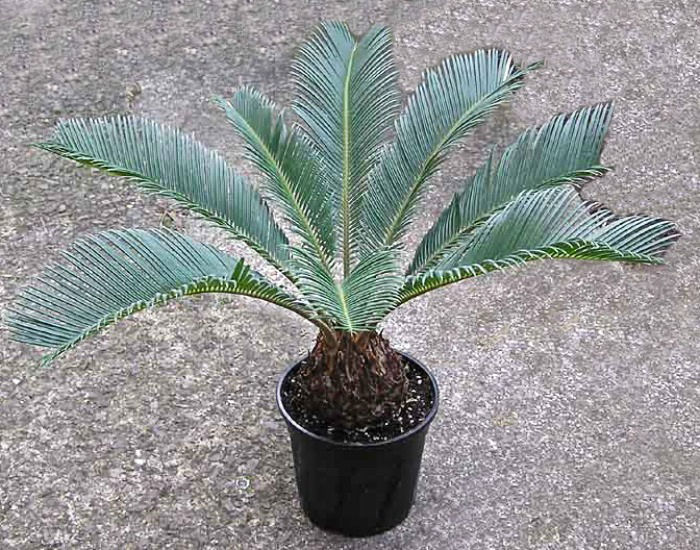 Indoor sago palms will benefit from a summer outside in a filtered sunlight location.

If you don’t have a male plant nearby, pollination of the plant will not happen. In order to get the large walnut sized orange seeds, the female flower must be pollinated by the male. 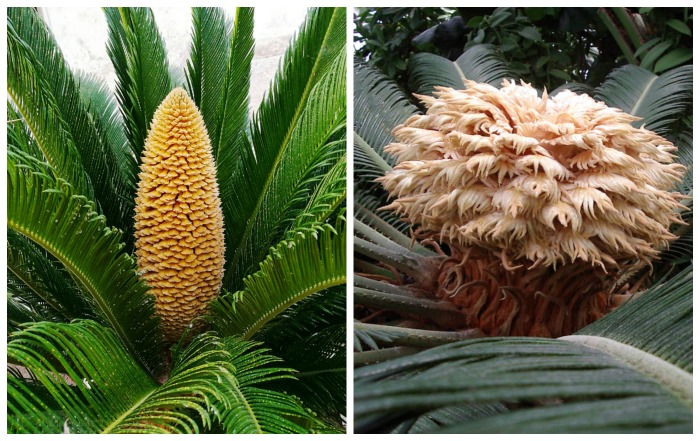 I was lucky enough to see a Sago palm that had been pollinated in Huntington Gardens in Los Angeles recently. The sago palm seeds were huge (almost 2 inches long!) 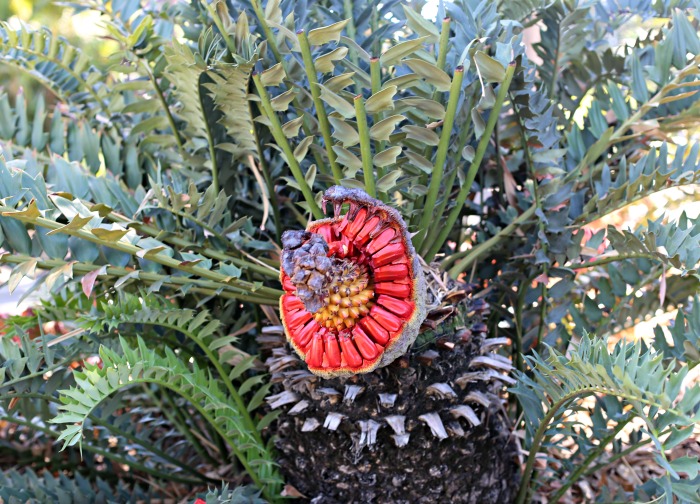 Flowering takes place in late spring.  It’s unlikely to see a sago palm flowering indoors.  It can take up to 15 years for a flower to develop, and even then it will only bloom about once every 3 years.

Normally, only plants grown outside will produce flowers.

Toxicity and other sago palm problems

All parts of the sago palm tree is toxic to human and pets if they are eaten. If you have cats and dogs or small children, care should be taken to keep the plants away from their reach. The seeds are especially toxic.

Sago palms are prone to scale infestations. Be sure to treat this aggressively if noted.  Signs of scale problems are yellowing of the new growth. (older growth naturally yellows.) Yellowing growth can also indicate over watering.

How to Grow a Sago Palm Tree Outdoors

If your idea tends more to growing sago palms outdoors, then there are a few care tips to be aware of. Consider it a tree, not an outdoor plant or shrub, since it will get larger and larger as the years progress. 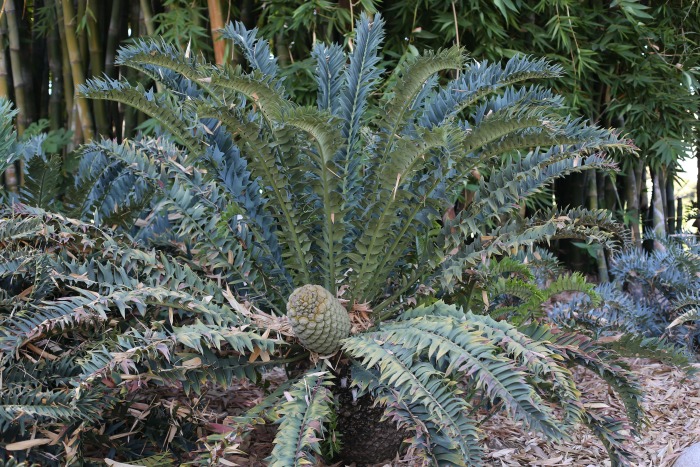 Outdoors, growing sago palms works if you live in zones 9 to 11.  It can tolerate fairly low temperatures as long as there are no prolonged freezes.

Sago palm height outdoors can grow to 10 feet, so think carefully about the eventual size when you plant them.  It takes about 8 years for the plant to reach a mature size and even longer to become fully mature.

Don’t plant the tree too close to the house so that the large fronds have room to spread out and grow to their limit. 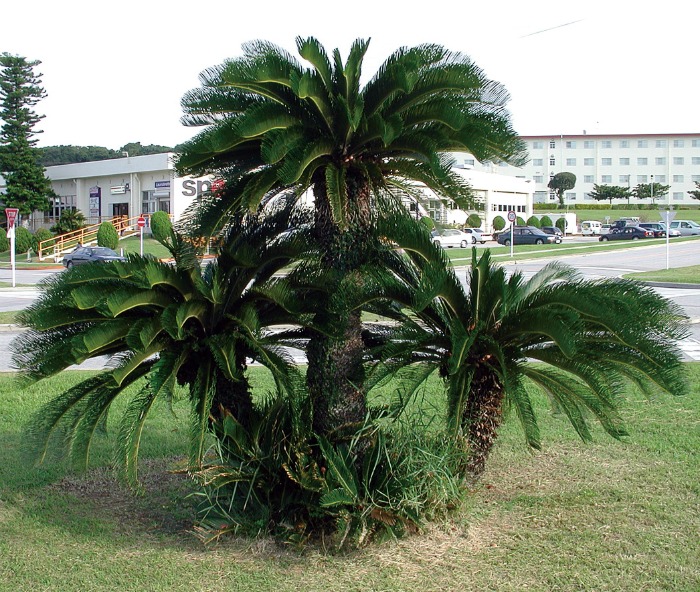 Choose a spot for your sago palm tree that gets good morning sun but filtered afternoon sun since the fronds are likely to burn if they get too much intense sunlight.

Be sure the soil drains well

Choose well draining soil and add organic matter or compost regularly to the soil. Water well when the plant first starts growing outdoors, but once established sago palms only require limited watering during the driest spells.

A slow release fertilizer once a year, in the spring, is all that is needed to keep your sago palm tree growing well if you use commercial fertilizers.

Adding compost or other organic matter is also a great idea for sago palms grow outside if you like to use more natural methods of fertilizing.

Pruning yellowing leaves is very important outdoors.  If you are a person who likes to plant and forget, a sago palm might not be a good choice, since it can end up a tangled mess easily if not pruned regularly.

This means that the pups which grow at the base of the plant should be removed as well as the dead and dying fronds.

Sago palms will produce male and female flowers outdoors which can result in the plant propagating and producing seeds. These grow from the center of the plant. 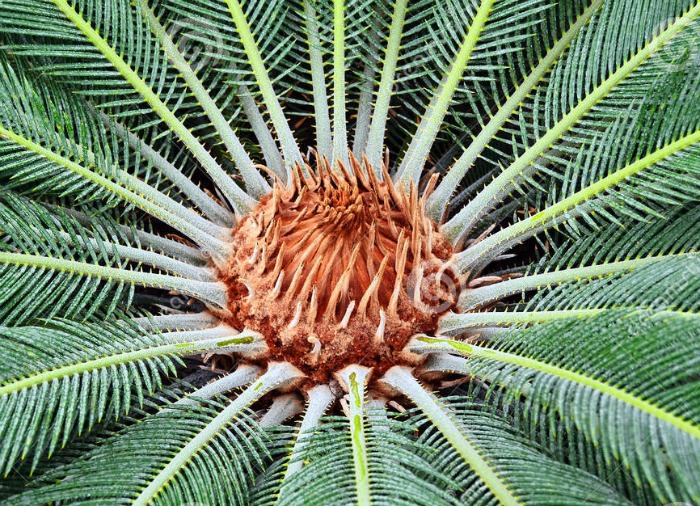 The most common method of propagation is to remove and plant the side pups that the plant will produce.

A light layer of mulch before winter approaches will help to ensure that the plant over winters well.

Sago palms grow very slowly.  Indoors, a two year old plant will just fit into a 5 inch pot.  Since the roots are pot bound, this will keep the growth rate very slow. 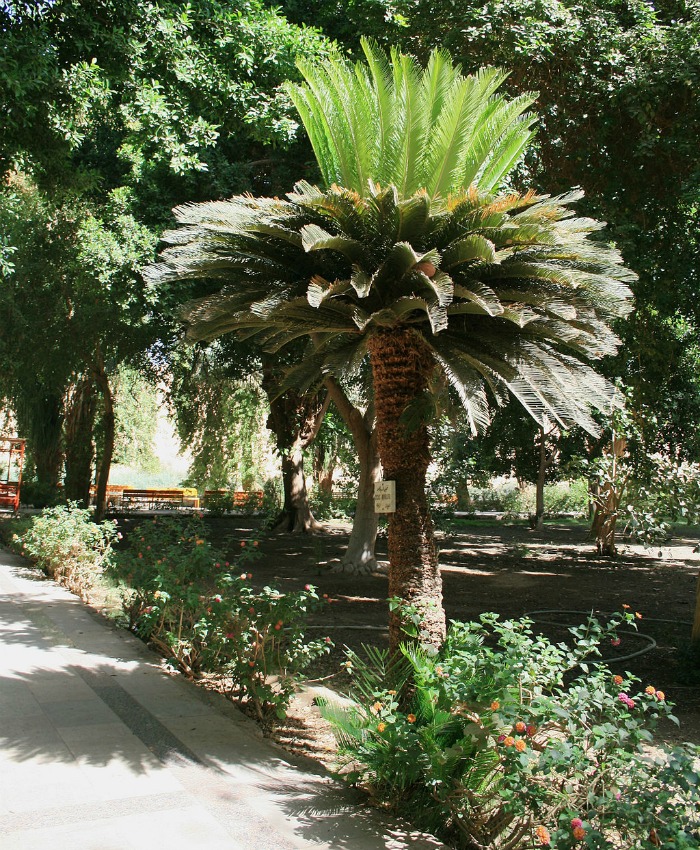 Outdoors, it can take 50 years or so for a mature plant to reach a 10 to 12 feet tall height.  If a quick growing palm is your aim, you should look for another species.

What is the best soil for sago palms?

Sagos like rich, well draining soil.  Clay and sandy soils will not produce a good specimen, so adding lots of compost at the foot of the tree once or twice a year will help to enrich it and also to help it drain well.

Indoors, the ideal soil mixture for sago palms is  regular potting soil that has been mixer with sand, peat moss or pumice to make it gritty.

Is the Sago Palm poisonous?

Many indoor and outdoor plants are poisonous, and Sago palm is no exception.  All parts of a sago palm, especially the seeds, are extremely poisonous if they are eaten by humans or animals.

The toxin in parts of the plant can irritate the gastrointestinal system, and if a large amount is eaten, it can cause liver failure.

Even though sago palms are a favorite food of islanders in Indonesia, consider it very toxic to us. Dogs and other pets can get very sick if they chew on the bark and other parts of the plants and should definitely be kept away from any seeds which might form.

Where can Sago Palms be grown outdoors?

To grow a sago palm outside, you need to live in zones 9 or 10. Sago palms can withstand a very brief period of colder temperatures (below 20 to 25 degrees, but they will not survive long periods at these temperatures.

You will find Sagos growing in the warmest areas of the USA (Southern Florida and California and other areas along the Southern border of the US.

Sago Palm Yellow Leaves, is this a problem?

Most sago palms will develop yellow leaves at some point. This is a normal reaction of the tree as the plant uses nutrients.  Older leaves will turn yellow and then brown and this is not a reason to worry.

On the other hand, if your sago palm tree has new fronds that are turning yellow, this could be a signal that there is a nutrient deficiency and fertilizing might help.

How much do Sago Palms cost?

Sago palm prices depend on the size of the plant. Purchasing a small indoor sago palm is easily affordable.  I bought mine for about $15 at Lowe’s and it was a decent size.

However, if you wish to purchase a large outdoor specimen, you will likely pay a lot for it (many hundreds of dollars). The plants are very slow growing and the grower has to recoup their expenses caring for it as it matures.

To be reminded of this post, pin this image to one of your gardening boards on Pinterest so that you can easily find it later. 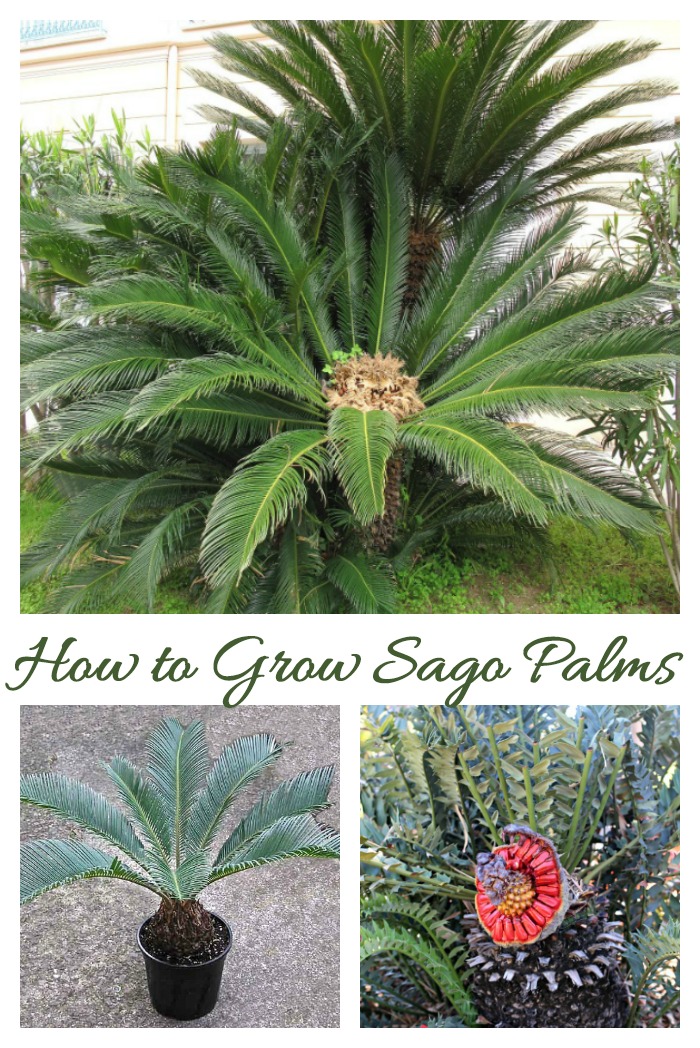 Whether you decide to try growing sago palms indoors or outside, remember to provide steady temperatures, light watering and protection from the hottest sunlight.  If you follow these tips, you can look forward to an exotic looking plant that will give you years of pleasure.

Admin note:  This article was first published in November of 2017. I have updated the post to include additional photos and more information about growing sago palms.

Hi! I am Carol and I love to garden and cook (with a bit of DIY thrown in for fun.) I come from a long line of gardeners and have always loved to experiment with food and recipes. Join me as I cook and garden my way through life.