Dieffenbachia poisoning is talked about all the time when the plant is reviewed on line, but how toxic is the plant to your cats, dogs and children, really?

Dieffenbachia one of the most common indoor plants, is easy to care and great as an office plant. However the plant can be poisonous so there are some situations where it might not be a good fit.

Sadly, there are many popular houseplants that are toxic to both humans and pets so care must be taken when growing them.

Home owners love the plant because it grows easily in low light conditions and fills a corner of a room to give a natural look. 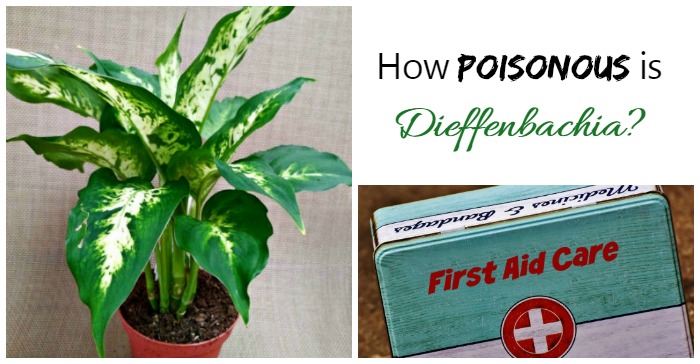 This is not the only plant that is toxic to humans and pets. Many other commonly grown plants are. Some others to find out about are these: 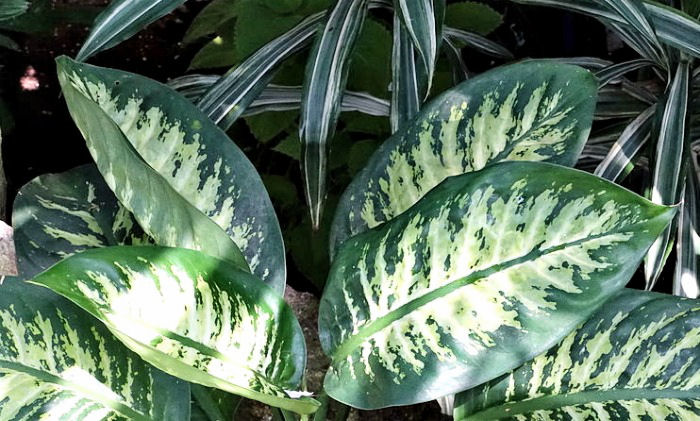 The common name for dieffenbachia is dumbcane.  The name refers to its poisonous effect, mainly when ingested.  The poison can temporarily cause an inability to speak. Another common name for it is “mother in law’s tongue.”

Is dumb cane poisonous? There is a reason that dieffenbachia has the common name dumb cane. Find out about the toxicity of this plant on The Gardening Cook.  Click To Tweet

Dieffenbachia Poisoning – Is it a real problem? 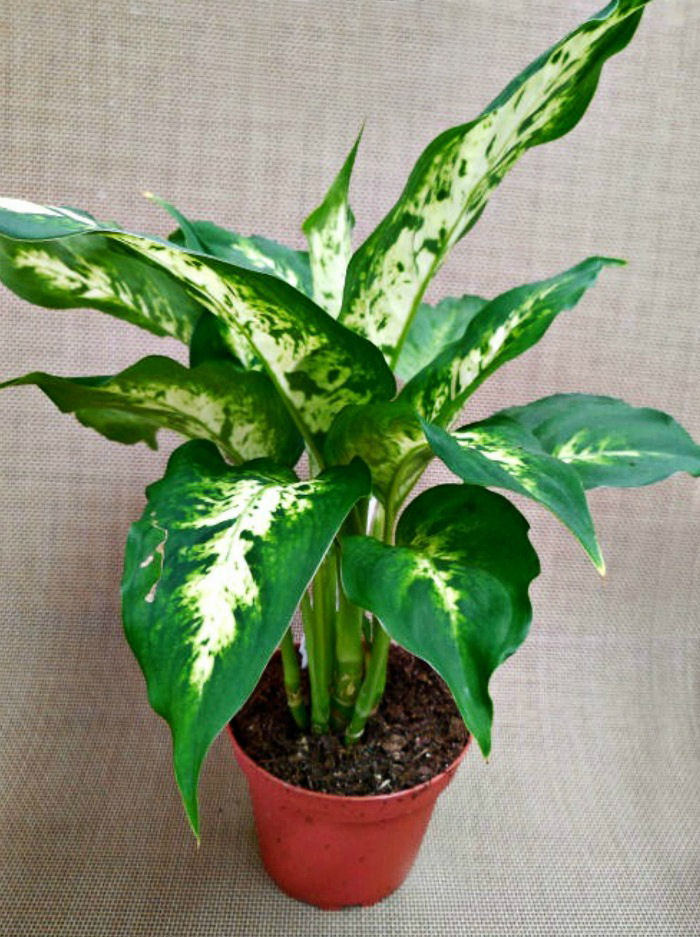 The poisonous effect of the dieffenbachia plant happens because the plant contains needle-shaped oxalate crystals, (oxalic acid) as well as asparagines, a protein found in the plant.

When the leaf is chewed, these crystals will cause a burning sensation.

This can make it a problem if the plant is grown around children or pets.  Generally the condition is mild and temporary.

The poison is transmitted through the juice in the plant, found in the stems, leaves and more rarely, the roots. 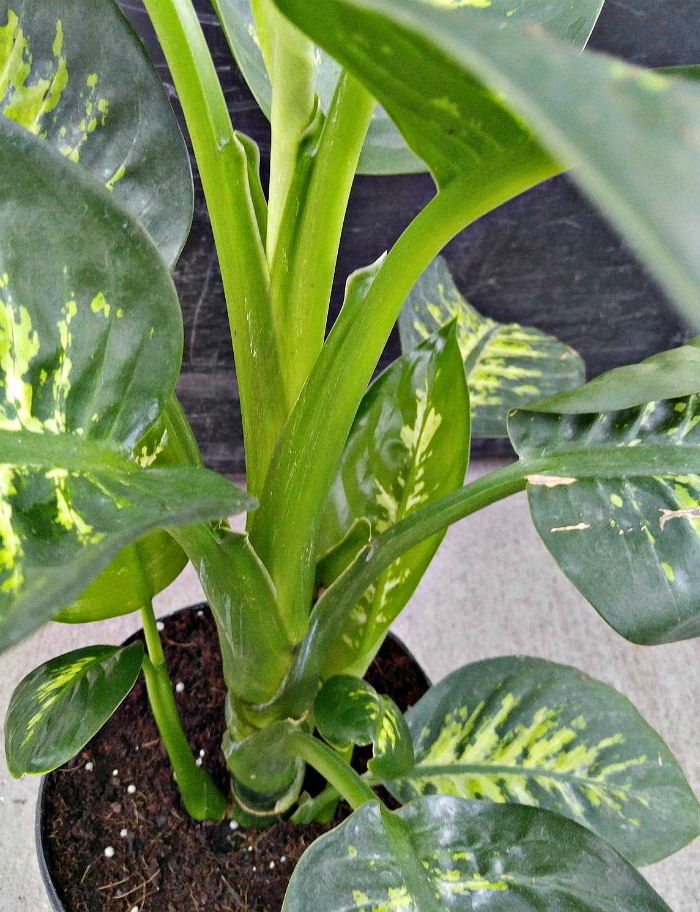 For children and pets, the problems are more severe than for adults.  The effects are rarely life threatening.

The most common patients attended to for dieffenbachia toxicity are children younger than 5.

The toxicity of the plant is considered in the medium range. 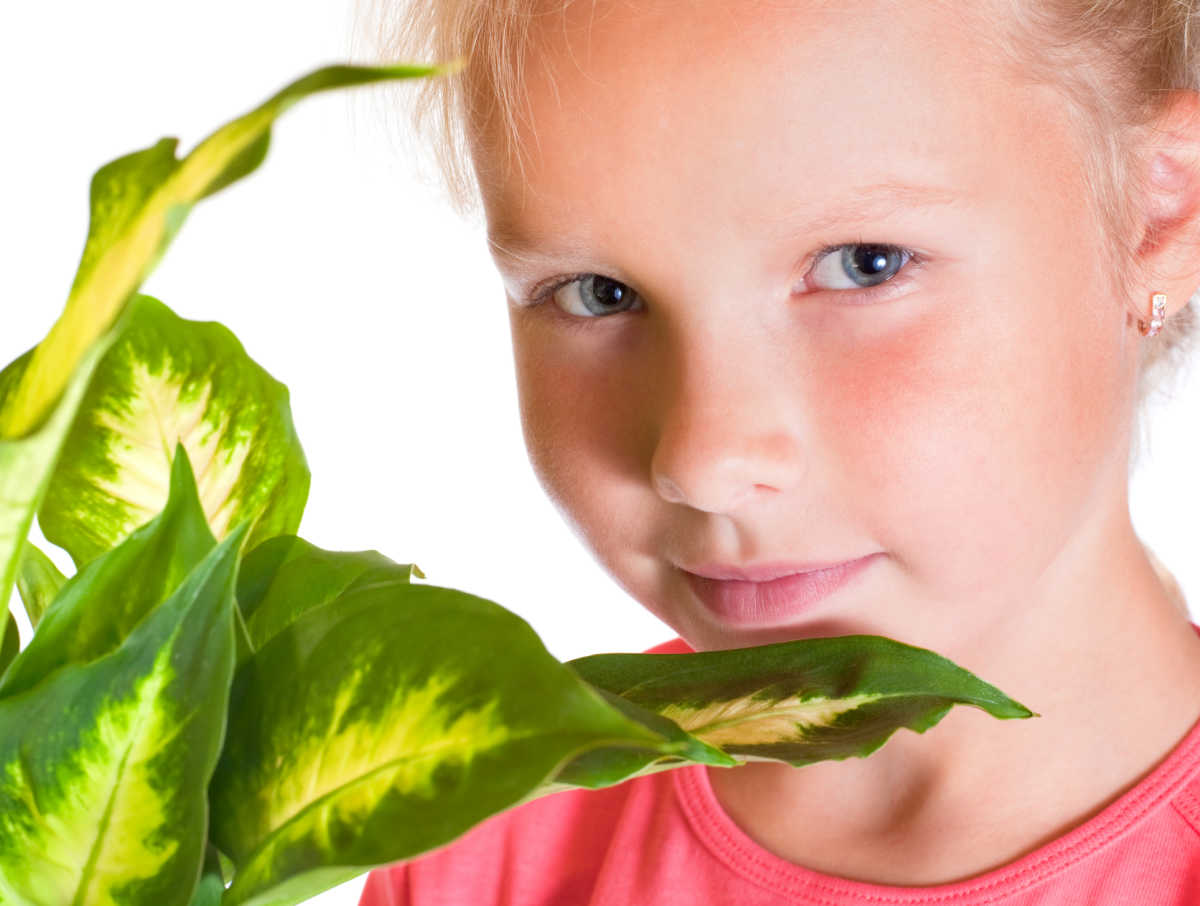 Most of the symptoms of dieffenbachia poisoning are mouth related. Ingesting the leaf poison can result in any of these symptoms:

If the poison is transferred to the eyes from the hands, these symptoms could occur:

If the juice of the plant has been swallowed, one can expect

Since the juice of the leaves produces a burning sensation, it is unlikely that large amounts would be consumed, so the last symptoms are “worst case” scenarios.

Is dieffenbachia toxic to cats and other pets? 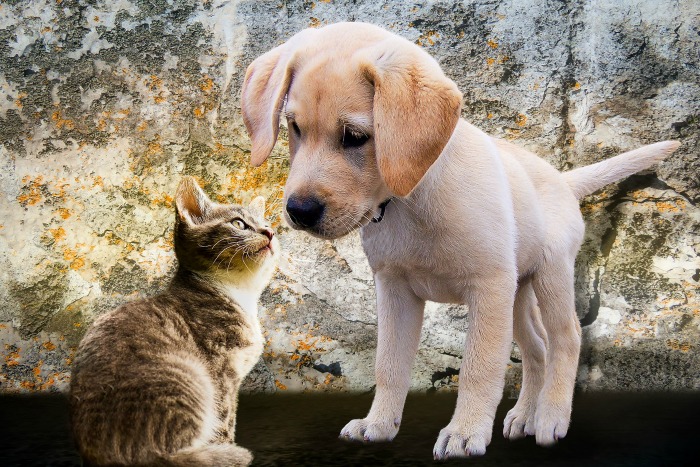 Since dogs and cats are most likely to be random chewers, the toxicity of the plant can be more severe. There have been reported instances of death with dogs, cats, rabbits and pet birds.

If you have young puppies or kittens, dieffenbachia is probably not a good plant to grow indoors since they love to chew on anything nearby.

In addition to the symptoms above for humans, dieffenbachia poisoning in animals might also include:

Since the symptoms in animals can be life threatening, a vet should be called if you suspect dieffenbachia poisoning. 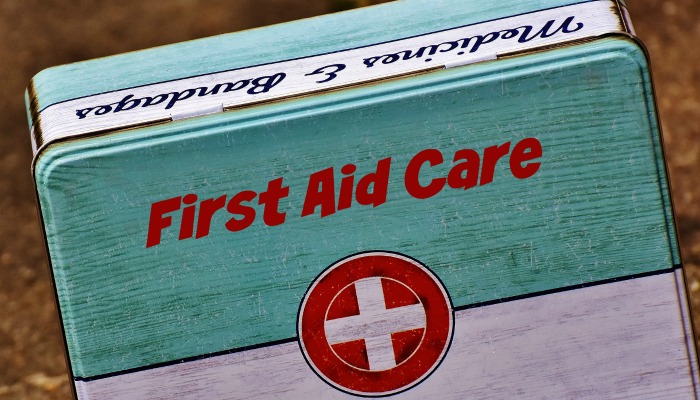 :If you or your child is affected, first wipe out the mouth with a cold, wet cloth.  Drink milk to ease the symptoms. For eye symptoms, rinse them well with cool water.

The most common additional medical treatments for dieffenbachia poisoning are antihistamines, medical charcoal or analgesic agents.

As long as the plant’s contact with the mouth or eyes is not severe, the symptoms will usually resolve in a few days.  You can also call poison control for more information. 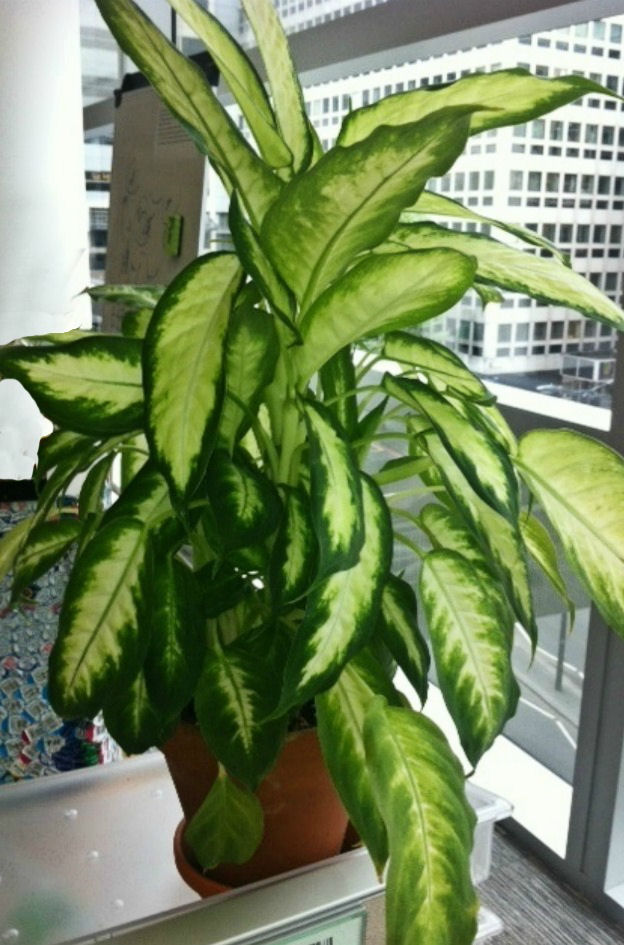 Dieffenbachia is a common office plant and should pose no problems when uses this way. However, since this plant is also common in many homes, some care should be exercised.

If the plant needs to be cut, it is wise to wear gloves.

If you have children or pets, it should be kept out of reach. If you do grow the plant be aware that it does have poisonous effects.

Be sure to seek urgent medical attention for your child or pets if the lips or tongue become swollen or there is any difficulty breathing or swallowing.

Would you like a reminder of this these dumb cane poisonous facts? Just pin this image to one of your gardening boards on Pinterest so that you can easily find it later.

Take your child to a doctor.

Those who know medicine for this please tell problem

Thank you for your information I just have bought it and I keep a few cats young and old. I may be bring back to shop

My Dieffenbachia Plant had blight on the leaves and I was told to water it with diluted dishwashing liquid. This didn't bring the black 'covering' off, so I wiped each leaf with a sponge, having to rub quite firmly. Shortly after, my hands started to burn and itch! This continued for about 3 days and was so bad that it prevented me sleeping properly at night. There was not much sign of rash, but intolerable itching, burning and a feeling of tightness of the skin. I would not like to think of a child with the symptoms I had and certainly hate to think of it being ingested! This was only from wiping the leaves, no contact with the juices - which I have proved can be worse! I suggest anyone who even handles this plant wear gloves for sure!

Does anyone know how to kill Dieffenbachia? It’s taken over large areas of our farm in Hawaii, and I can’t find an herbicide that works on it. I made the mistake of trying to control it with a string trimmer, and it shot the sap everywhere (including on me). That was a painful experience! Worse yet, the millions of little pieces chewed up and spit out by the trimmer all seem to have taken root and spread this pestilence.