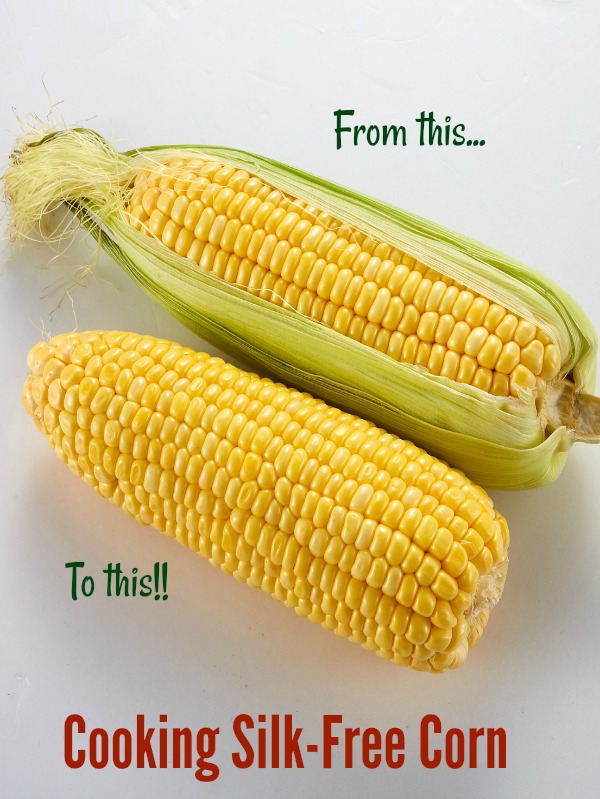 These easy tips show how easy it is to microwave corn on the cob in their husks and make the task of shucking so much easier.

No one wants silk on a corn cob when it hits your mouth. Nothing is worse than biting into an ear of freshly cooked corn and come away with bits of the silk stuck to your teeth.  Shucking corn won’t remove them all, trust me.

I like to shuck corn close to the time that I plan to cook it, so that the ears keep fresher, so buying shucked corn in the store doesn’t do it for me.

Once the cooking is done, the whole outer husk and silk are removed in one easy step.

What does the term “corn silk” mean?

We tend to think of corn silk as those sticky ends to ears of corn that are made to annoy us and make our life difficult.  In actual fact, corn silk has a real purpose! 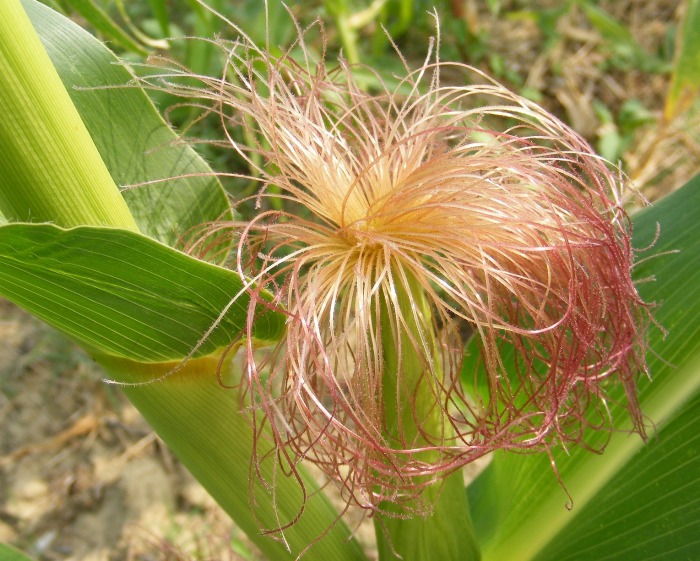 The silk which appears to grow off the top of ears of corn is a part of the female flowers of the corn plant. The purpose of corn silk to trap pollen from the male flower.

The male flower is the tassel that sticks out from the top of the plant. Each strand of silk is actually connected to an individual corn kernel.

When the wind blows, it shakes the pollen from the tassel so that it falls onto the ends of the silk.  When this happens, each strand of silk carries a small amount of the pollen down to the area on the ear of corn where it is attached. 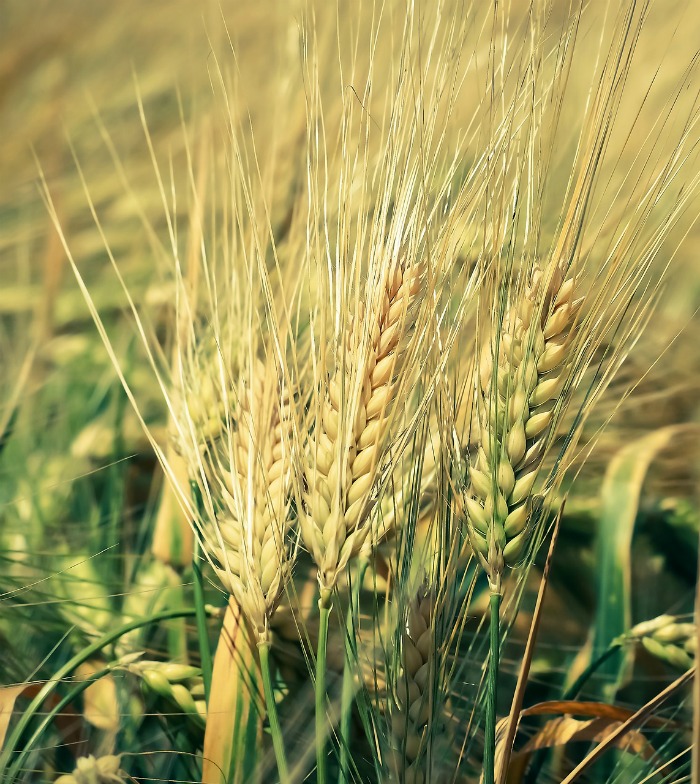 So, now that we know why corn silk is a necessary evil, how to we easily shuck corn without a silky mess?

Get the taste of summer corn without the mess of silk on your teeth with this easy food hack. Find out how to easily shuck corn by cooking it in the microwave at The Gardening Cook. 🌽🌽🌽 Click To Tweet

Peeling corn doesn’t get all the silk

For years, I would tediously shuck the corn and try to peel away all the silk before I cooked it.  I would get most of it, but was sure to leave a few of the silk strands.

Once you have this situation, no matter how long you cook the corn, it still stays attached. Mother Nature has created a perfect way to fertilize corn…she doesn’t care so much whether we get the silk in our teeth! 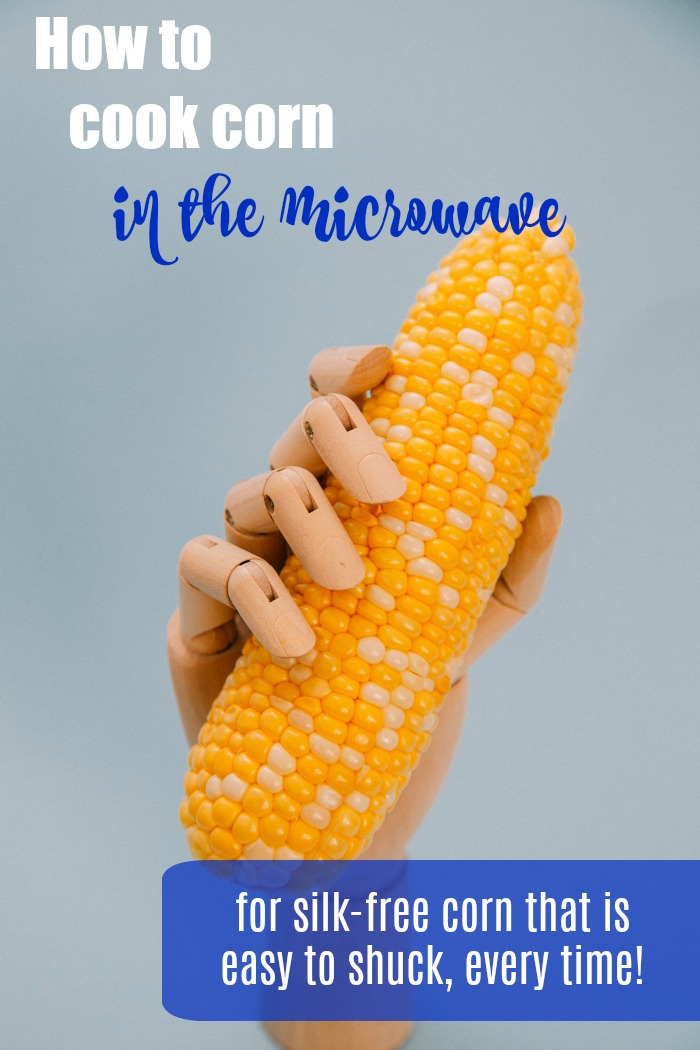 How to cook corn in the microwave

There is a really easy food hack to avoid the problem of silk on corn, and it saves the task of shucking the corn in the first place. Just follow these few tips and you will have clean corn on the cob with no silk, and it will be very moist and flavorful every time.

Start with corn in the husks

Cooking corn in the microwave begins with ears of corn that are still in the husk.  You can do this process even if the ends have been trimmed but it works best with full husks.

I like to choose ears of corn that have a lot of silk protruding from the ends. This will give me something to hold on to later! 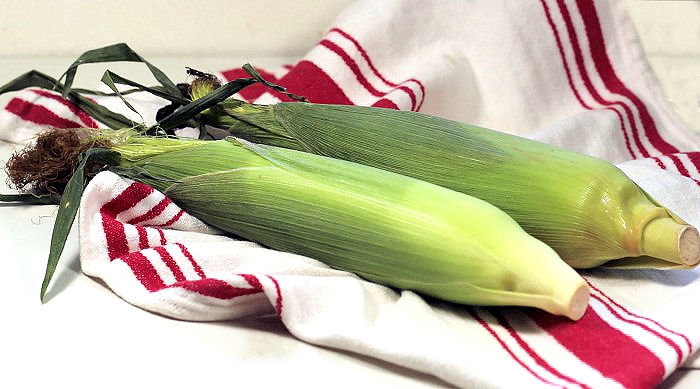 Let’s microwave corn on the cob!

Microwave the corn, husks and all, for about 2-3 minutes for each ear of corn, depending on their size. Cooking corn this way traps steam inside the husk which helps with the silk and husk removal after cooking. 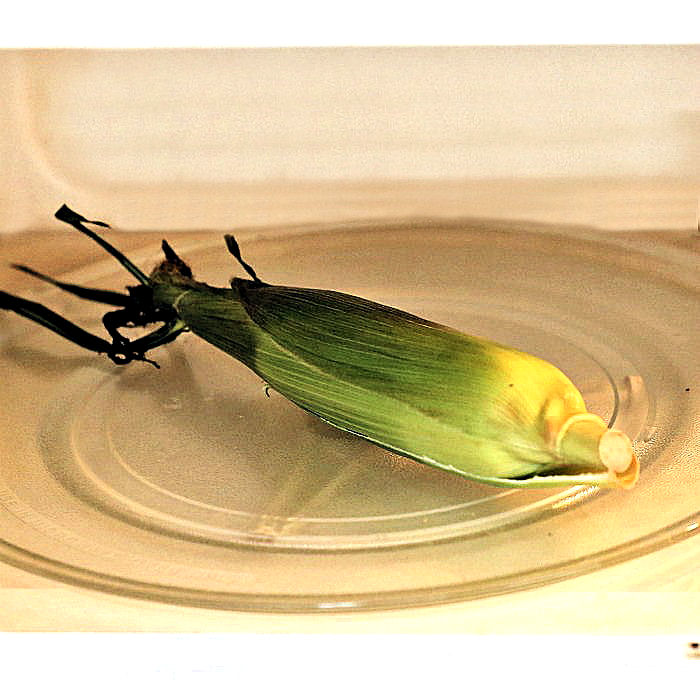 Be careful. The corn will be hot! 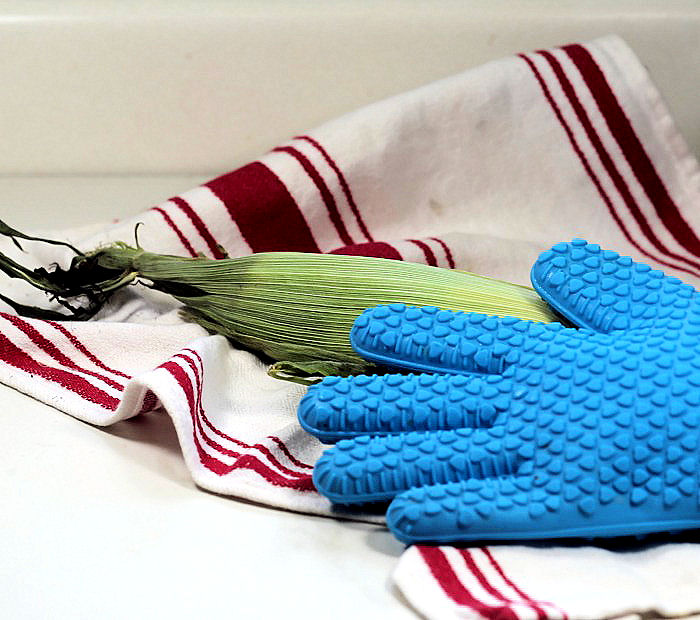 Cut the root end of the corn

With a very sharp knife, cut off the root end of each ear (not the silk end) at the widest part of the cob and discard the end. 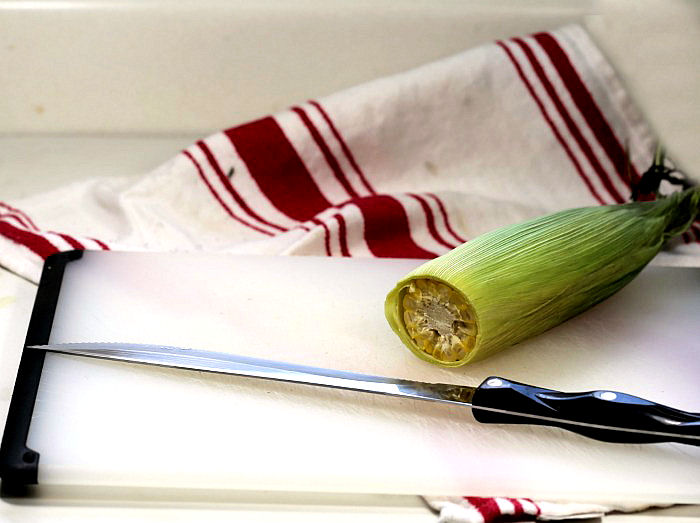 You will want to make sure that you are cutting all the way through all of the husk, not just the knob at the very end where it joined to the plant.

If you leave the leaves of the husk still attached to the root end, the husks won’t remove easily. If this happens, just slice a bit more off the end.

Use a long skewer to hold the corn

It is easiest to remove the corn silk if you insert a long BBQ skewer into the cut end of the corn and push it in firmly. 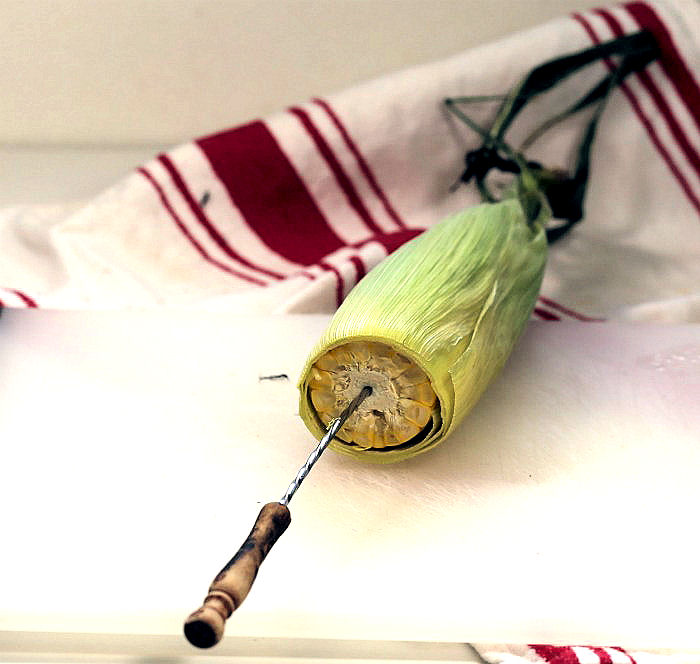 In addition to making the job of shucking the corn easier, the BBQ skewer is also a great tool to leave in the corn cob to make eating it easier. There is no need to mess with individual corn holders!

Hold on to the skewer with one hand and then grab the silk end with the other hand and start to pull. 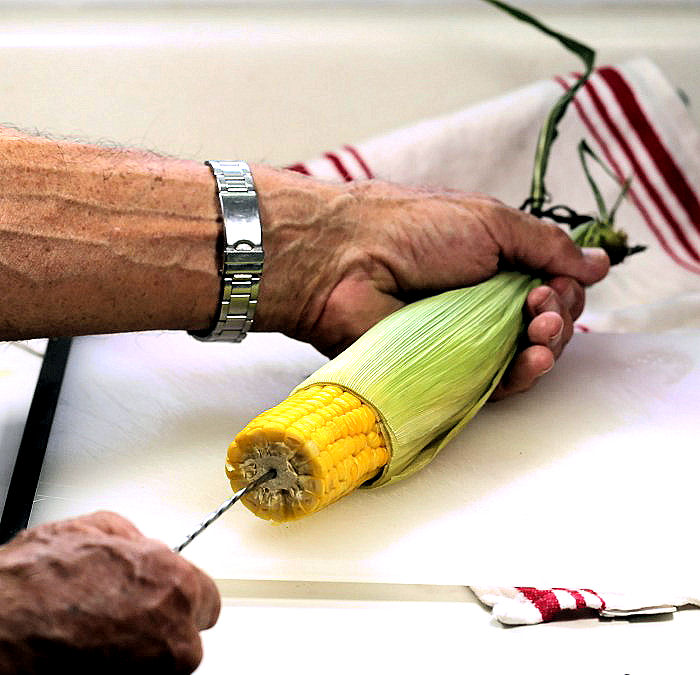 Shucking the corn in one strong pull

Grab the entire tip of the corn where the silks are located tightly and squeeze them as you pull.  With a bit of practice the corn cob will simply slip out. 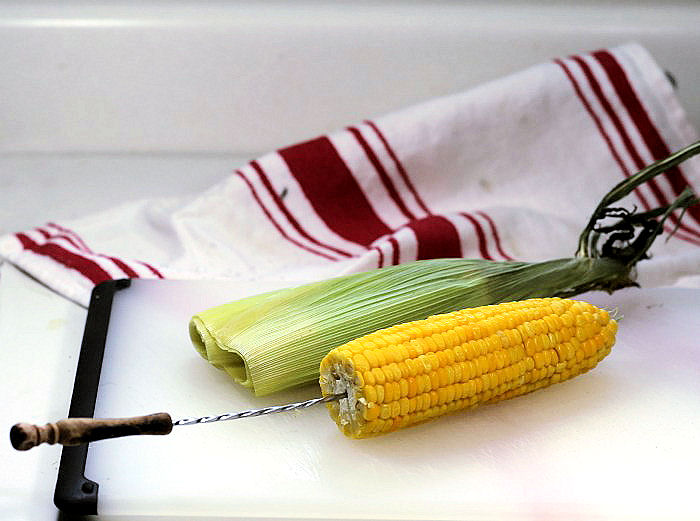 The husk will likely stay in one piece and every last piece of silk will be gone and left inside the discarded husk!

The trick for shucking the corn easily is to make sure the corn is cooked long enough. This creates more steam and makes the ear “shrink” a bit, making it easier to shuck the whole husk.

If the corn cob resists, just give it a bit of a tug with the other hand. Also look to see if any pieces of husk are still attached to the root end.

Depending on how much steam has built up you can also shake it over a plate to release the corn cob.

Pour melted butter over the corn cob if desired. I also like mine sprinkled with lime and pepper for a more healthy version. Marvel at the silk-free corn!

Once you learned how to cook corn in the microwave, you won’t ever go back. 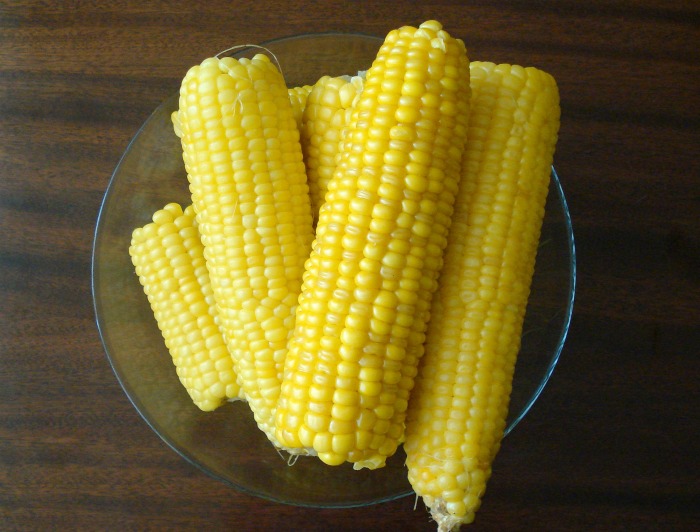 Have you ever tried microwaving corn on the cob?  Did it take you a while to get the knack of it?  Let us know in the comments below.

Admin note: This post for removing silk from corn first appeared on the blog in January of 2013. I have updated the post to include qll new photos, a printable project card and a video for you to enjoy.

Pin this project for cooking corn in the microwave

Would you like a reminder of this project for shucking corn and removing the corn silk?  Just pin this image to one of your household tips boards on Pinterest. 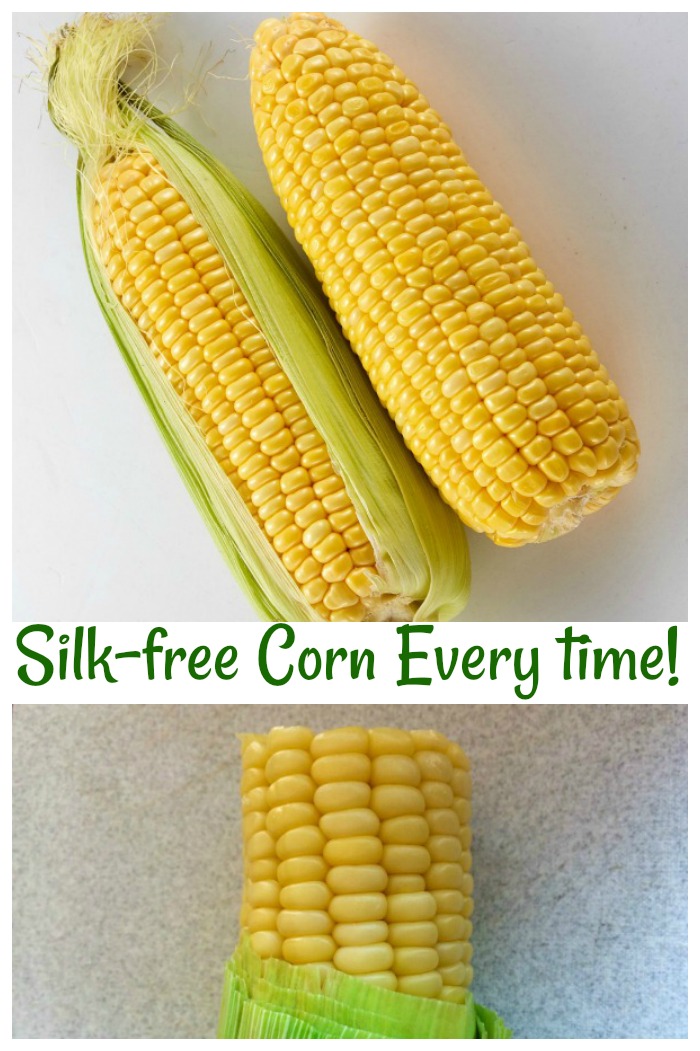 Microwaved ears of corn on the cob will be very hot. Be careful not to burn your hands.

this an interesting article. More power!