The Shasta daisy has lovely summer blooms. Caring for Shasta daisies is easy. It is a fairly low maintenance perennial plant that naturalizes to give more and more blooms each year.

It is a great plant for filling in garden beds and bare spots in your garden.

Is your birthday in April? You are probably aware that the daisy is one of April’s birth flowers.  (Sweet pea is the other.)

One of the prettiest daisies is the Shasta Daisy. It has the traditional English daisy look with pure white petals with yellow centers and dark, glossy leaves.

These care tips will help you to get the most out of the plant. 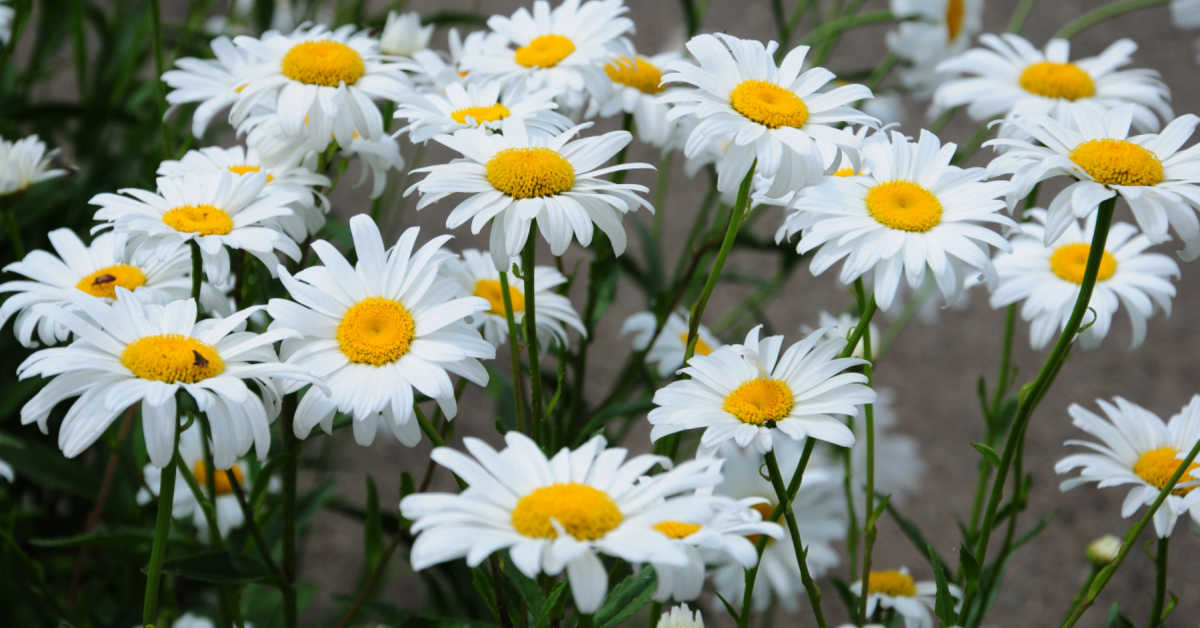 The flower is also thought to symbolize innocence and hope because of its pure white color and simple look. It is a common feature in English cottage style gardens.

The botanical name for Shasta Daisy has changed over the years.  It used to be known as Chrysanthemum x superbum, but is now commonly referred to as Leucanthemum x superbum. There are many varieties of Shasta daisy plants. Some will grow to 3 feet tall and others to just a few inches.

The term Shasta Daisy is named after Mount Shasta, which is located in Northern California.  The plant is a hybrid that was developed by Luther Burbank in 1901.

While some daisies come in a variety of colors, most Shasta Daisy colors are limited to white petals with a yellow center and dark green glossy leaves.

(There are a few with yellow petals, too.) If you are looking for brightly colored daisies, try Gerbera, Marguerite, painted daisies and, of course, coneflowers. 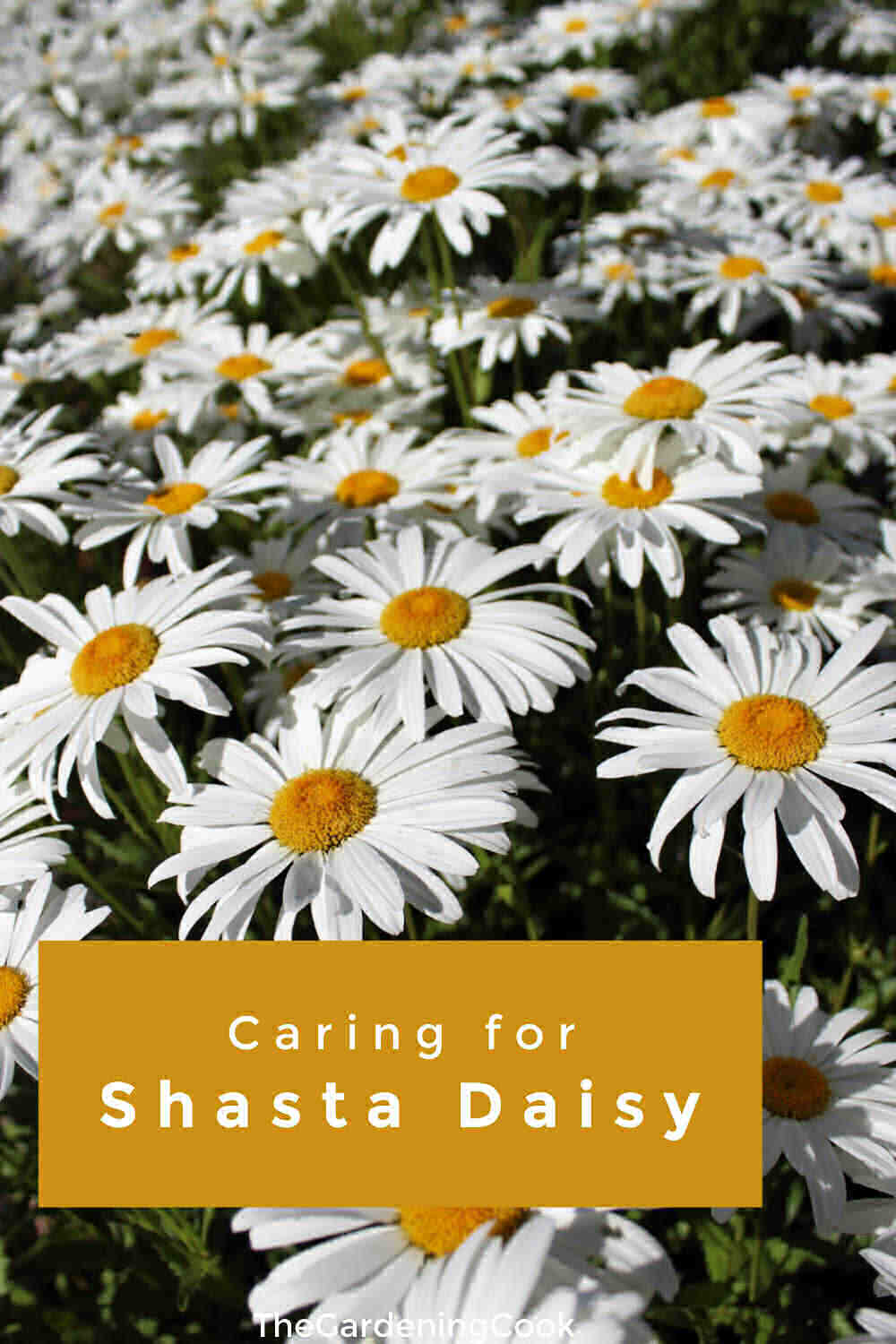 Do you like the look of an English cottage garden? Try growing Shasta daisies. It's an easy to grow perennial and the birthflower of those born in April. 🌼🌼🌼 Get growing tips at the Gardening Cook. Click To Tweet

The Gardening Cook is a participant in the Amazon Affiliate Program. This post may contain affiliate links. I earn a small commission, at no extra cost to you if you purchase through an affiliate link.

Is the Shasta Daisy a common English Daisy?

Many daisies often have white petals and yellow centers. How to they differ? Some common daisies that you are likely to come across are English daisies, Shasta Daisies and Oxeye Daisies.

The Shasta variety is very similar to an English daisy, but it has a much larger yellow center and it also grows much taller. The flowers themselves are also much larger.

The Oxeye Daisy is also similar to the English daisy. It is a roadside wildflower that spreads easily and is very drought tolerant. It is known to be quite invasive. 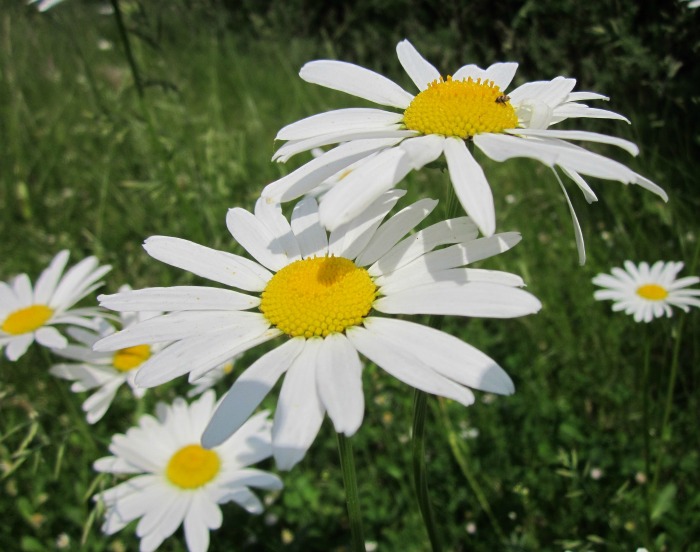 The English daisy is from the bellis genus. Shasta daisy and Oxeye daisies are from the leucanthemum family

The main considerations for growing the Shasta daisy plant is to give it plenty of sunlight and to take care to divide to contain the plant. It naturalizes easily and can take over a garden if it is not maintained well. 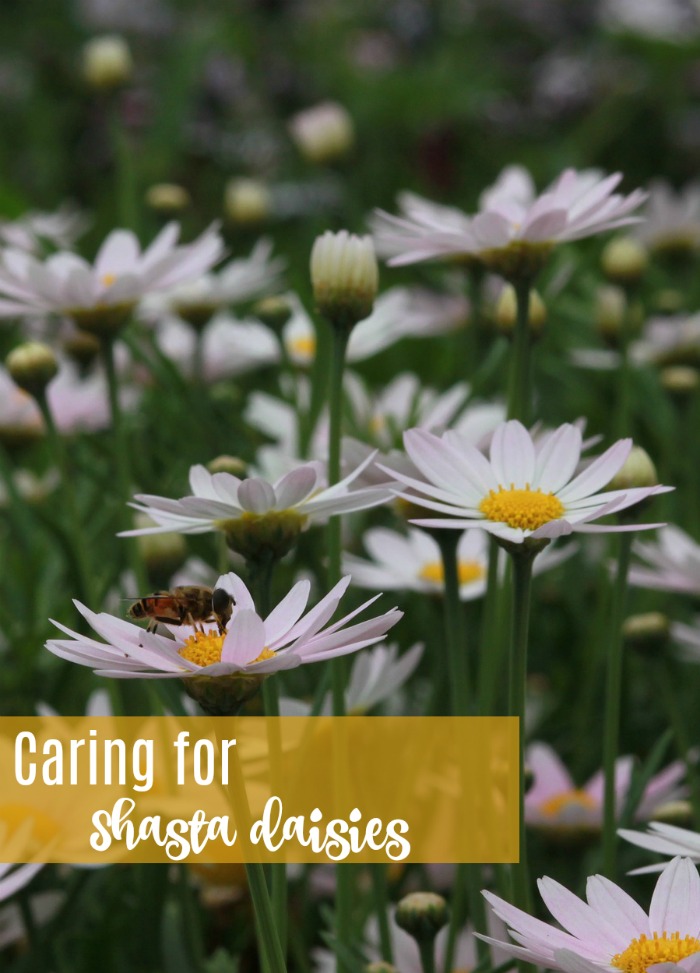 How much sunlight do Shasta Daisies need?

The plant likes to grow in full sun.  This makes it ideal for borders in the middle of lawns or containers that sit in the center of sunny garden beds.

This perennial likes a well draining, fertile soil, so preparing the soil before you plant is a must.  A fertile soil contains major nutrients such as nitrogen, phosphorus and potassium, as well as smaller quantities of calcium, sulfur, iron, magnesium and other nutrients. Silty soil is considered the most nutrient rich. Some ways to increase the fertility of your soil are:

Many local Department of Agriculture departments will analyze your soil for free, or you can purchase a soil testing kit from your local garden center, or online.

Shasta daisies will grow easily from seeds.  You can start seeds in peat pots indoors, or containers in a cold frame in autumn or early spring. If you sow seeds directly into the garden, you can expect blooms the next year after the plant has been growing for a year. 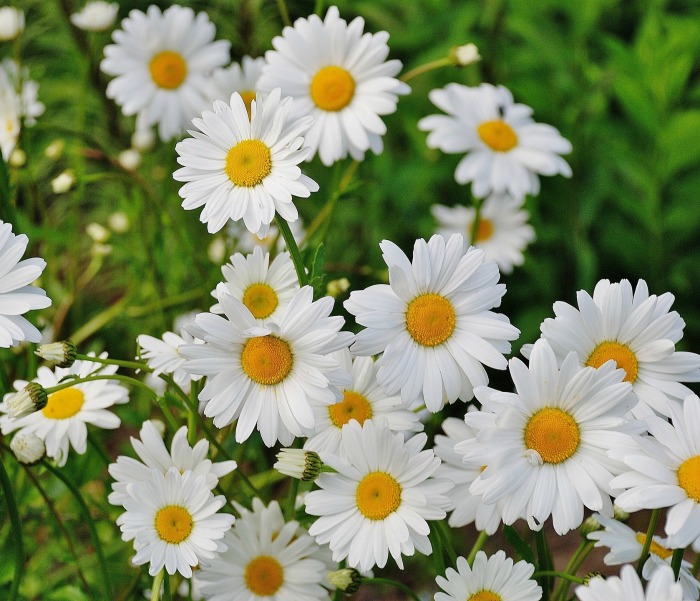 Garden centers sell containers of Shasta daisies each year. Plant these in the spring for summer blooms.

Space Shasta daisy plants 2-3 feet apart to allow for their spreading nature.  Be sure to give the plant a hole twice the diameter of the container you purchased it it.

Dwarf varieties such as Shasta Daisy Lacrosse can be planted a bit closer. It is also a bit more cold hardy since it will also grow in zone 4.

Be sure to check out my list of other cold hardy perennial plants here.

The plant flowers in summer and blooms until early fall. The flowers have showy heads with a large center yellow area. Depending on the variety, there is quite a bit of variation in the petals.

Shasta daisies have an upright habit with stiff stems and flowers that sit above the foliage.  Shorter dwarf varieties are better in the front of a garden beds but the taller plants will form big clumps that add a backdrop to other perennials.

The blooms are great for cutting to bring indoors.

The petals of shasta daisy flowers are nyctinastic – They open up and close at night. 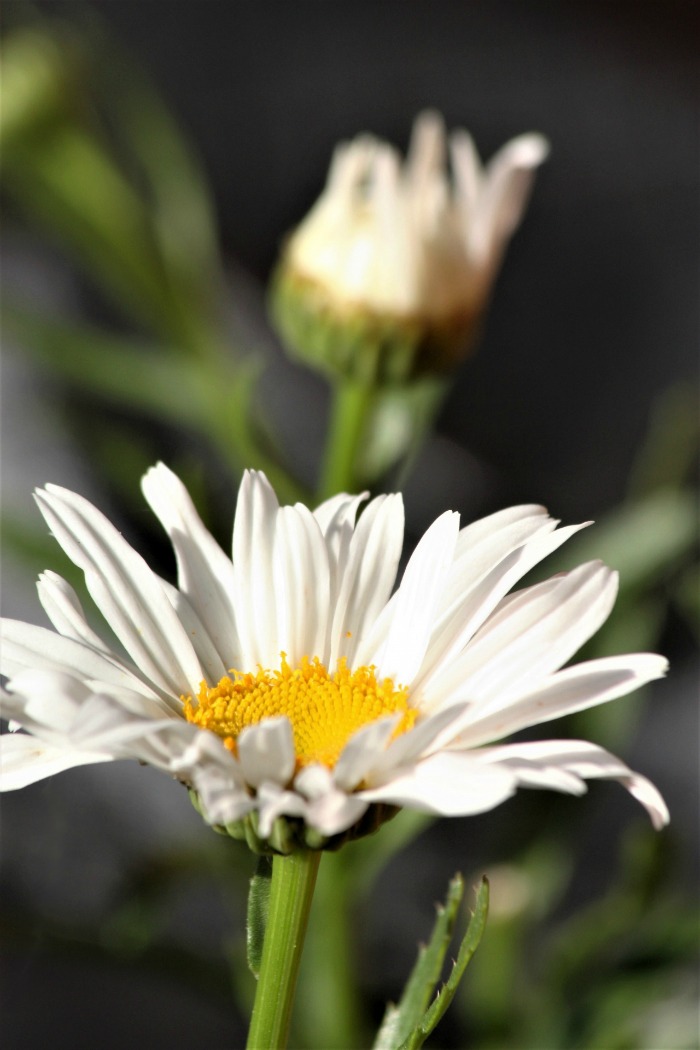 The taller varieties may need protection from strong winds, and some also require forms of support to hold the flower stems so that they don’t flop over.

How often should I water a Shasta Daisy?

This perennial is quite drought friendly.  It definitely does not like soggy soil or wet feet and will easily rot if you over water it. The plant can actually tolerate limited periods of drought. 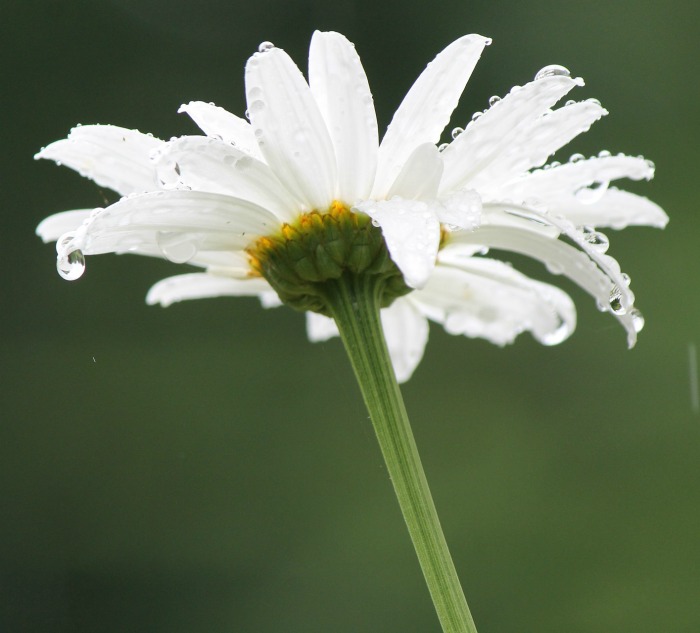 If your summer rainfall is less than 1 inch a week, it’s a good idea to give the plant an extra drink.

How cold hardy is Shasta Daisy?

This pretty plant with its perky blooms is a hardy perennial that will come back even after freezing winters in cold hardiness zones 5-8. Even though the plant is a perennial, it is quite short lived.  Many only last just a few year.

To offset the short life span, plant new plants each year. This yearly planting will ensure that the plant will continue to naturalize and grace your garden setting.

Caring for Shasta Daisies means that you must put deadheading on your list of summer chores. Deadheading is the process of removing the blooms that have finished flowering.

To do this task, just cut the flower stem off at the base of the plant. New flower stems will soon emerge.

Taking care to deadhead means that you may get two or three rounds of flowers a season, so it is well worth the effort.

If you deadhead the plant it will encourage heavier blooms and a larger amount of them, so your plant will give you a better show of flowers.

Cut flowers last a long time indoors, and will also encourage additional blooming on the plants in the ground.

For plants that don’t need deadheading, be sure to check out this article.

The plant is relatively easy to prune.  It has no real winter interest and most of the time the plant turns mushy during the winter, so pruning is a good idea to tidy up the garden area.

After the first frost that kills perennial foliage, cut the stems of the plant back to about an inch above the soil line. If you live in a warm hardiness zone, the plant may stay evergreen all year long. 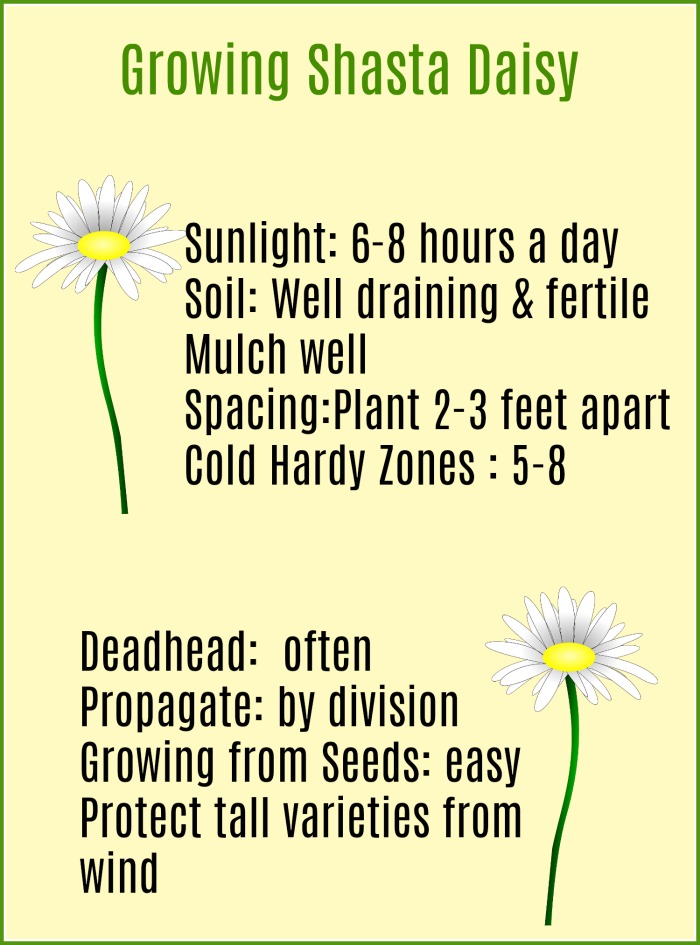 Shasta daisy seeds are readily available and this is one of the most common methods of growing the plant. The plant grows from rhizomes, which spread under the soil, so the size of the clump can increase fairly quickly.

To propagate existing plants, divide every 3-4 years in early spring or late summer.

Once your clump of Shasta daisy plants get to be about 3 years old, like many perennials, the plant will become woody and die out in the center.

To divide the plant, dig up the clump and discard the woody center. You will likely have two or three outer sections with more healthy young rhizomes.

Replant these in your garden just below the crown of the new plants.

Be sure to check local regulations if you plan to grow Oxeyes. They are considered invasive and are banned in some states, since they grow TOO quickly.

There are many perennials that will make nice companions for daisies.  Since it has a white flowering habit, other more colorful cottage garden perennials will look great growing nearby. 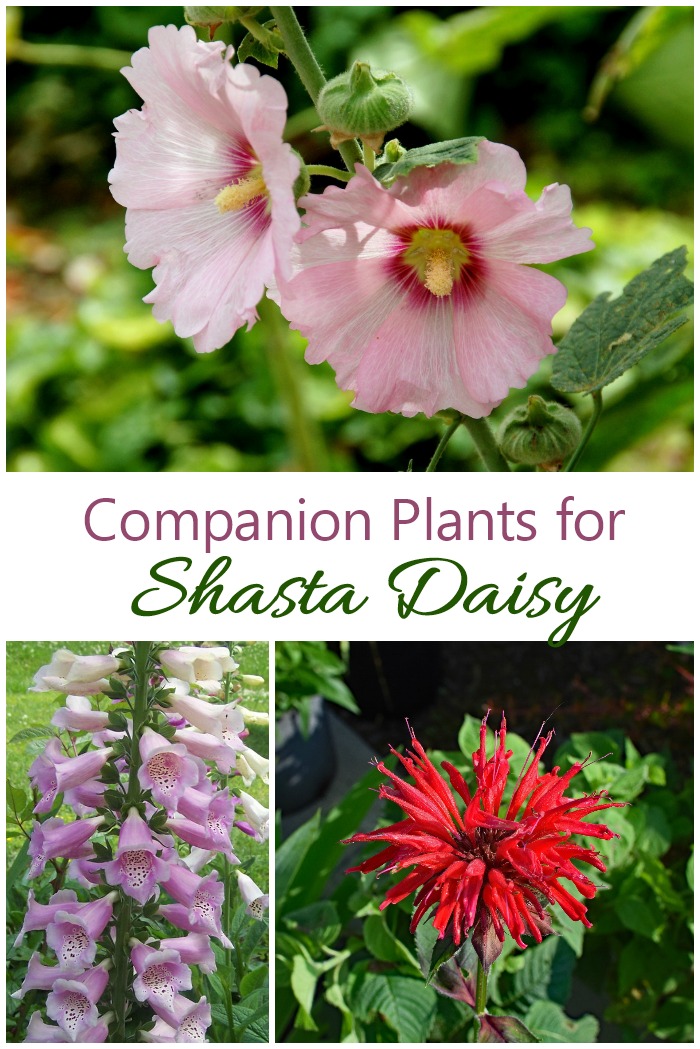 Some popular choices of companion plants are: 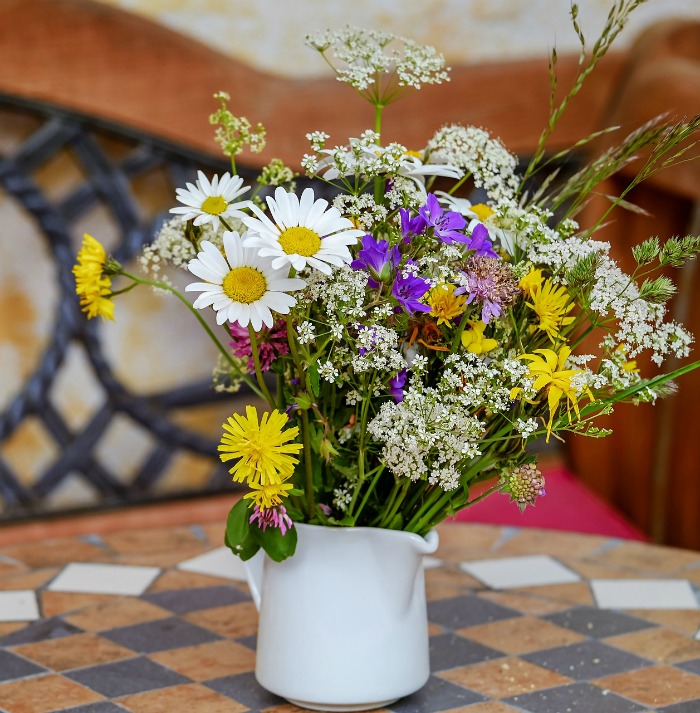 The plants are a great attraction for bees and butterflies. It is a deer resistant plant and makes great cutting garden flowers.  The plant is great for both garden beds and containers.

There are a few bugs that could be a problem for Shasta Daisies.  Earwigs, and aphids will sometimes appear and slugs seem to enjoy them too.

As far as diseases go, leaf spots can also be an issue. Over-watering can cause fungal diseases. Generally speaking, most forms of daisies are low maintenance when it comes to pests and diseases.

The Gardening Cook is a participant in the Amazon Affiliate Program. This post may contain affiliate links. I earn a small commission, at no extra cost to you if you purchase through an affiliate link.

There are many varieties of Shasta Daisy available. Here are a few to try:

Silver Princess Dwarf has large snow white daisies and grows to only 12″ tall with a 12″ spread. Nice compact size that is perfect for smaller garden spots and containers.

If you would like to be reminded of the care tips in this post, pin the image below to one of your gardening boards. 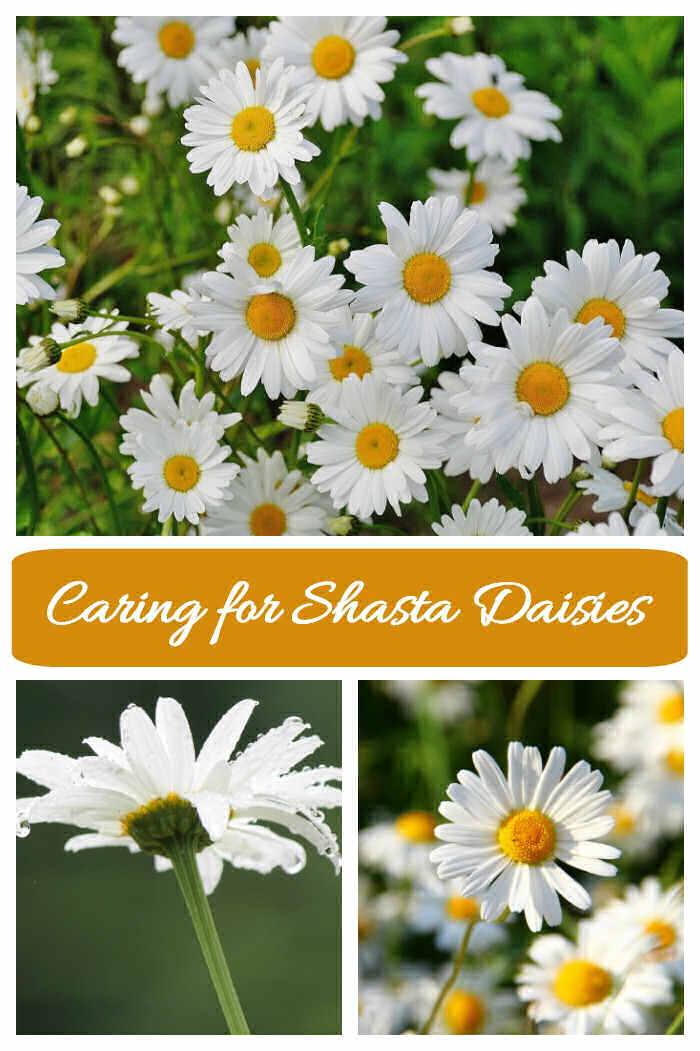 What is your favorite type of daisies?  What is it that bothers you most about trying to grow them?  I’d love to hear your comments below.

Admin note: This post for how to care for Shasta daisies first appeared on the blog in June of 2018. I have updated the post to add new images, a printable project card, and a video for you to enjoy.

Print out the chart below with growing tips for Shasta Daisies and add it to your gardening journal.

My Shasta daisys look beautiful but now some of the outer stems are laying towards the ground. What is wrong?

Are they the stems that have flowered? It's normal for those to lay down when the blooms are done.

Hi Carol After dead heading, I clipped the heads off. Are the seeds in the heads good for Planting? Please advise.

How do I get the grass that’s growing in my Shasta daisies out of there?

The only way that I know of to get out weeds that are connected to thye root ball is to dig up the plant and gently pry the roots apart and take out the weeds and replant.

I live in South east Texas, Houston area. I plant Shasta daisies from seed. They grow well until August, and then die. Can someone give me helpful hints. I fertilize and water.