This Borax weed killer for Creeping Charlie is a more natural remedy that resorting to chemical herbicides and Round Up.

It can be used on established lawns and works well to get of this common weed.

Are you plagued with Creeping Charlie in your lawn? So are many home owners and they are looking for natural solutions.

The budget friendly DIY project will kill your weeds and save you money, as well. 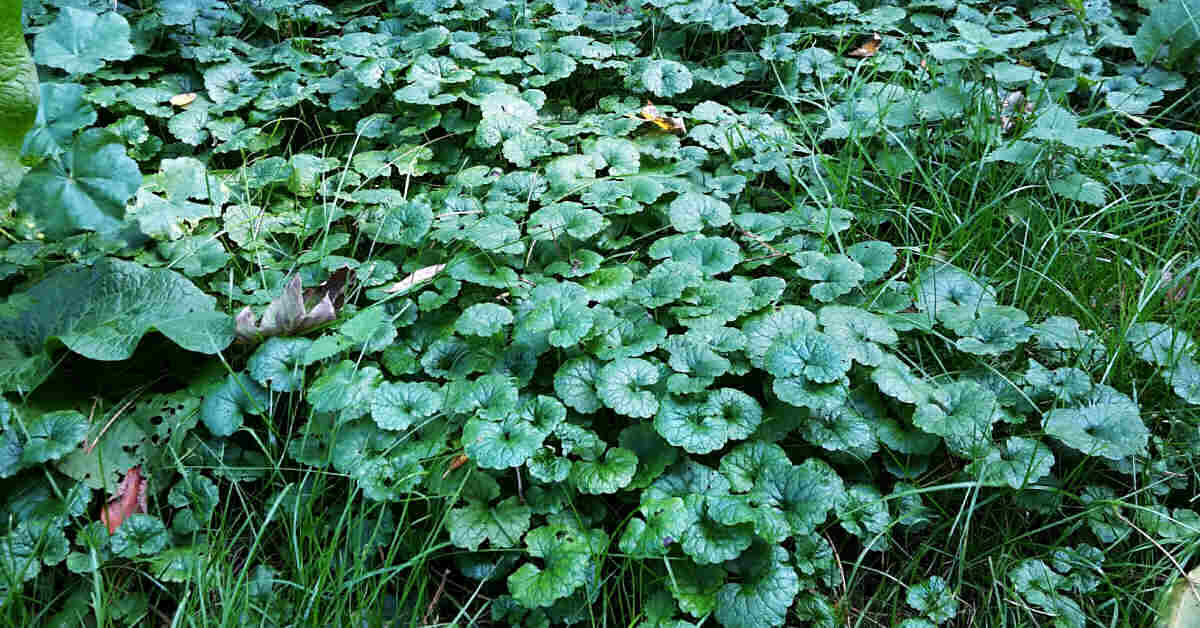 What is Creeping Charlie?

Glechoma hederacea, also known as Creeping Charlie, Creeping Jenny or ground ivy, is a common invasive plants that can ruin the look of your lawn.

Creeping Charlie is an aggressive, low-growing perennial that loves to live and spread in shady, moist areas.

This plant is a member of the mint family and has a slightly aromatic scent, particularly right after you have mowed your lawn.

Ground ivy spread by its seeds and also by its vining stems which root at their nodes. 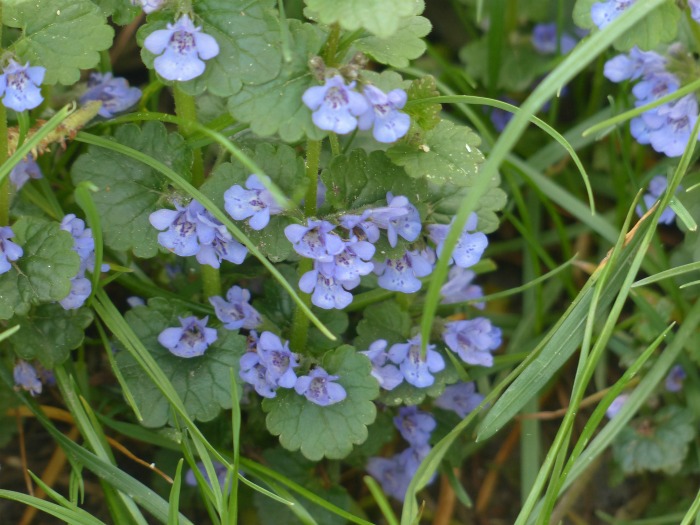 The leaves of creeping Charlie have a distinctive coin shape with rounded toothed edges. Since it is a creeping plant, it can move out of borders and invade the lawn, which makes hand weeding a real challenge.

Hand weeding works fairly well in spring, but as soon as the lawn has started growing, it becomes more difficult. Weeding by hand can be an arduous task because of the numerous roots along the stems of the weed.

If you have ever pulled up a long string of creeping Charlie, you will know how this brings a smile to your face! 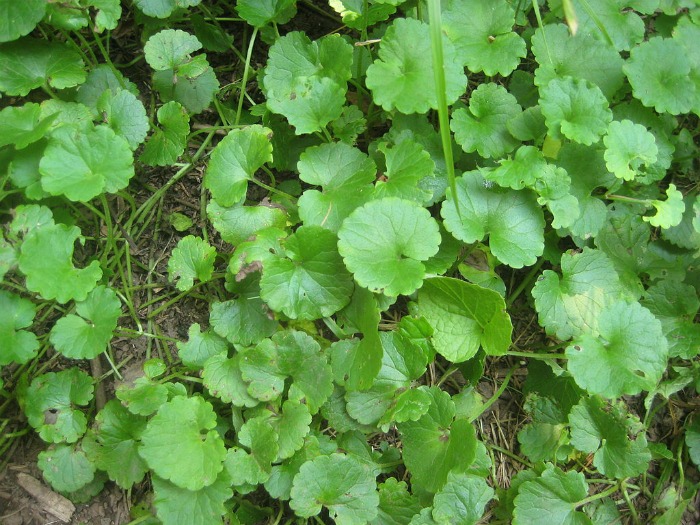 Creeping Charlie is native to Europe and was first used in the US as a ground cover.  It was soon discovered to be a pest because of its spreading habit.

I have made a vinegar weed killer in the past, but it will kill surrounding grass if used in a lawn, so I needed an alternative.

Even though this weed killer works well for killing Creeping Charlie and not killing your grass, care must still be exercised when using it. If excessive quantities are used, Borax can damage and even destroy lawns.

I am not suggesting this weed killer as a general all around remedy for weeds.

This weed killer is effective against Creeping Charlie but can be damaging to other plants, so take care using it.  It does work wonders on weeds in cracks in walkways, though, since it will not hurt surrounding plants.

All plants need a certain amount of boron to survive, but this varies from plant to plant.

As early as the 1920s, this mineral salt was being used not only for its natural cleaning properties, and also because gardeners learned that it was able to eradicate weeds.

When borax powder is used on weeds, it will exceed the amount that the plant needs to a toxic level and will thus kill the weed. 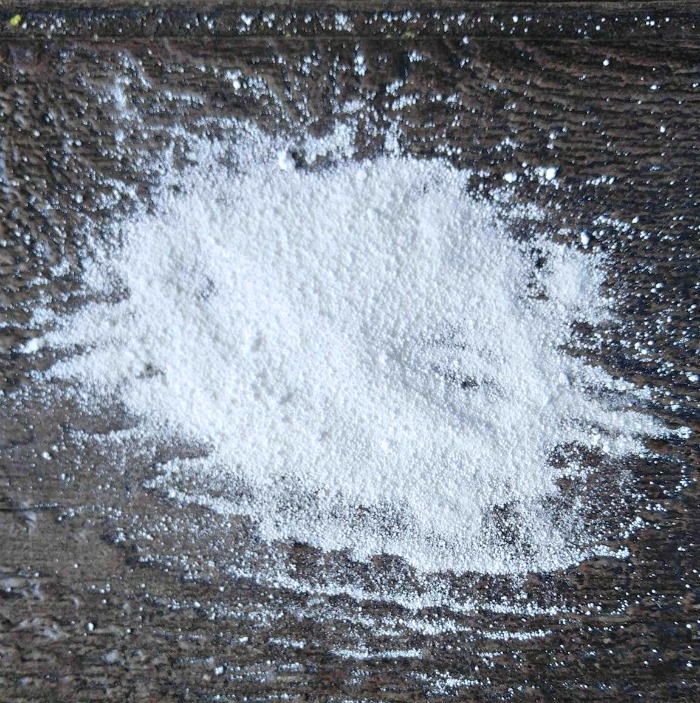 How well it works, and how toxic the weed killer is depends on how much boron is already in your soil.  Soil testing will give you this information and much more.

Borax is not harmful to people, but since most plants cannot tolerate too much of it, using it on weeds in a vegetable garden is not recommended.

Borax is not only great as a weed killer for creeping Charlie. I also tested five versions of a Borax ant killer against Terro and found that many of them are quite effective at controlling ants.

Borax can also be used to preserve flowers when combined with corn meal with great results.

There are lots of retail weed killers which are effective at killing Creeping Charlie, but if you are looking for a more natural weed killer, this one is known to be effective. 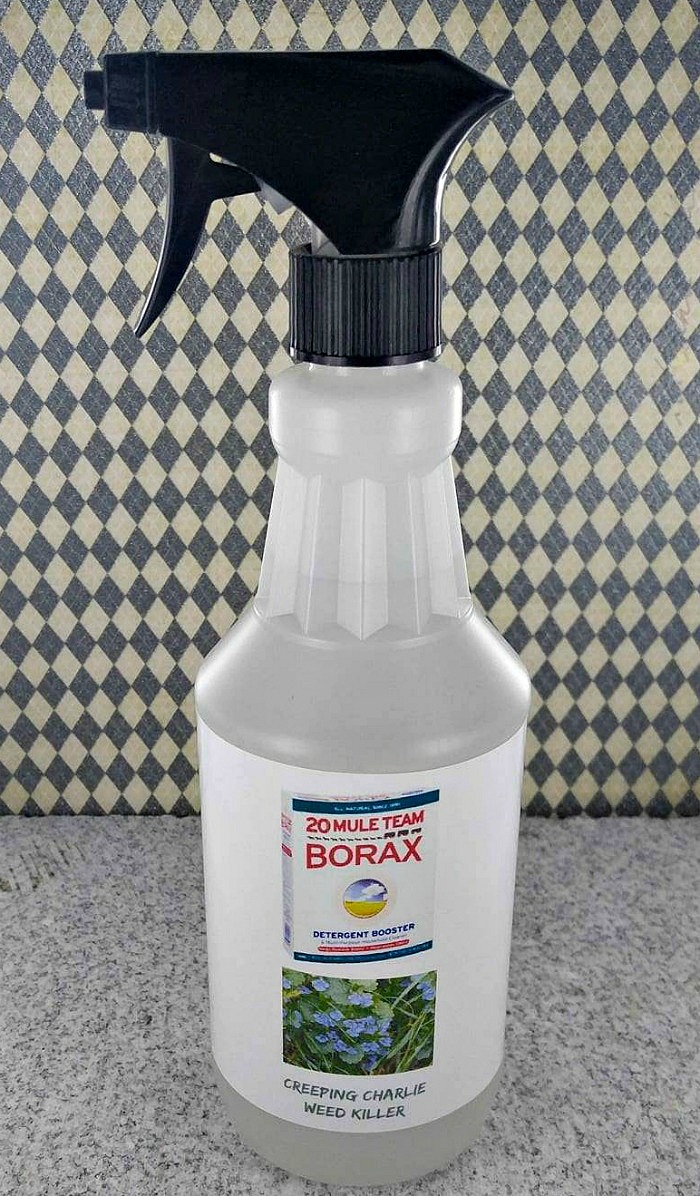 Note: this is a concentrate that needs to be mixed with water.

This formulation is one that I found on the Iowa State University website.  They suggest taking care to use the proper formulation to avoid adding excessive amounts of Borax to your lawns.

This formula will treat 1,000 sq. feet: (Don’t use it on a smaller area, or it will be too strong.) For use on established lawns.

TIP:  If you have trouble mixing the Borax, a reader Claudia has suggested that she mixes hers formula in a blender for 30 seconds and it does a good job. An old blender would be better than one you use for food preparation.

For uniform application on weeds, pour the Borax weed killer into a spray bottle and evenly apply the mixture over the area to be treated. I use a spray bottle that holds about 3 cups of the mixture and know that it will treat 62 square feet.

Remember that creeping Jenny spreads by underground runners, so it’s a good idea to treat a slightly wider area than the one where you find the weed.

For smaller areas, cut the amounts down but keep the percentages the same.  i.e.  For 500 feet, use 5 oz of Borax in 2 oz of warm water and dilute with 1.25 gallons of water.

For best results, apply the Borax weed killer when the creeping Charlie weed is actively growing in the fall. Choose a day when no rain expected for at least 48 hours. Then repeat two weeks later.

You can print out a Borax weed killer label here. I set my printer to print it in the center of a piece of photo paper and chose 5 inches as my width. It fit nicely around my spray bottle.

Adding a label to your spray bottle will make sure that it is not used for another purpose. 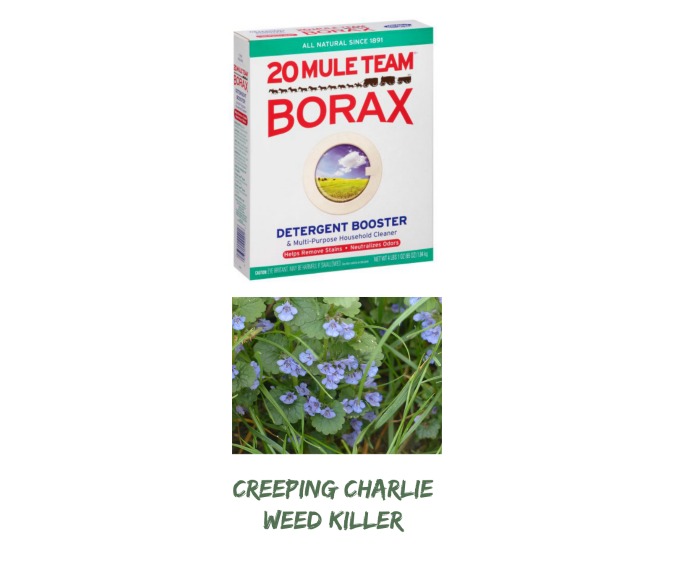 What to expect for results

The type of soil that you have may impact the amount of weed killer that it will accept.  Leaf browning of the weed normally begins by the end of the first week.

This weed killer should be used once a year for two successive years. 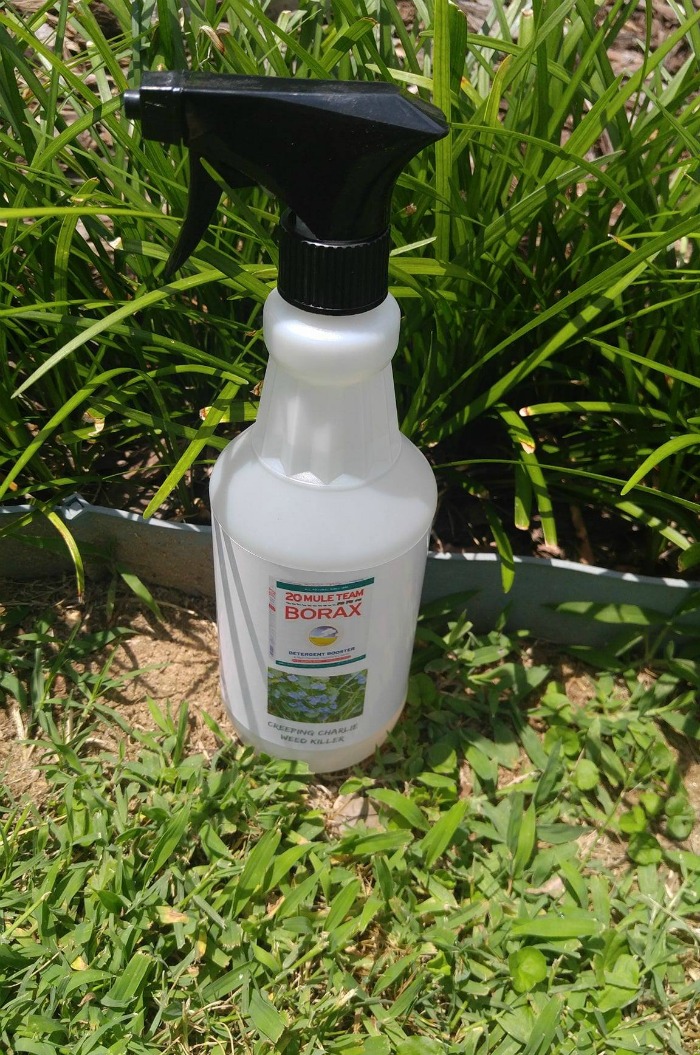 Be sure not to get too energetic with the formula once you see it working.  Adding too much can leave you with dead patches in your lawn which will need re-seeding.

It is normal for some light browning to occur on the good grass in the lawn. They should recover over time.

The biggest problem that people encounter when using this weed killer is applying too much.  The formula covers 1000 square feet and that is how much it should be used on.

More is not always better and certainly not in this case.

The key to the successful eradication of ground ivy is proper application. After the weed has been controlled and your lawn re-established, practice good lawn care tips so that your lawn develops a thick stand of turf grass.

This will help to discourage creeping Jenny from being a problem in future. 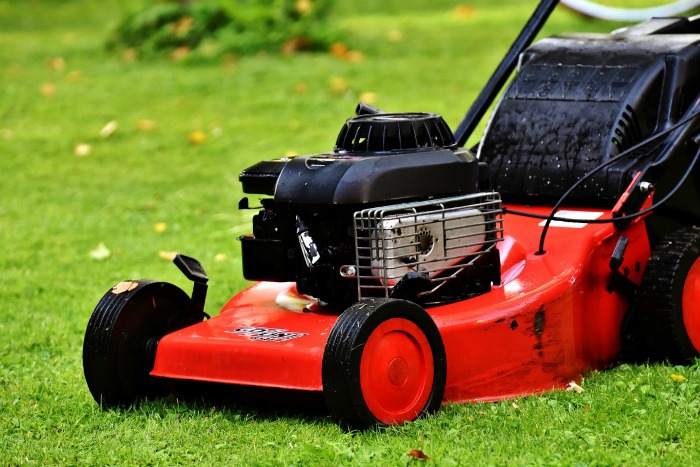 In spite of this Borax weed killer doing a good job at killing creeping Charlie, nothing works as well as having a thick, healthy lawn to keep the weed out of it in the first place.

A note on toxicity. Borax is known to be toxic to both dogs and cats, so be careful of this formula around them. Vinegar is the only weed killer that I know is perfectly safe near pets and it is not selective, so it will kill the grass too.

Do you have a problem with Creeping Charlie?  What did you do to get it under control? Please leave your comments below.

Pin this post for the Borax weed killer for creeping Charlie

Would you like a reminder of this formula for the natural creeping Charlie weed killer? Just pin this image to one of your gardening boards on Pinterest so that you can easily find it later. 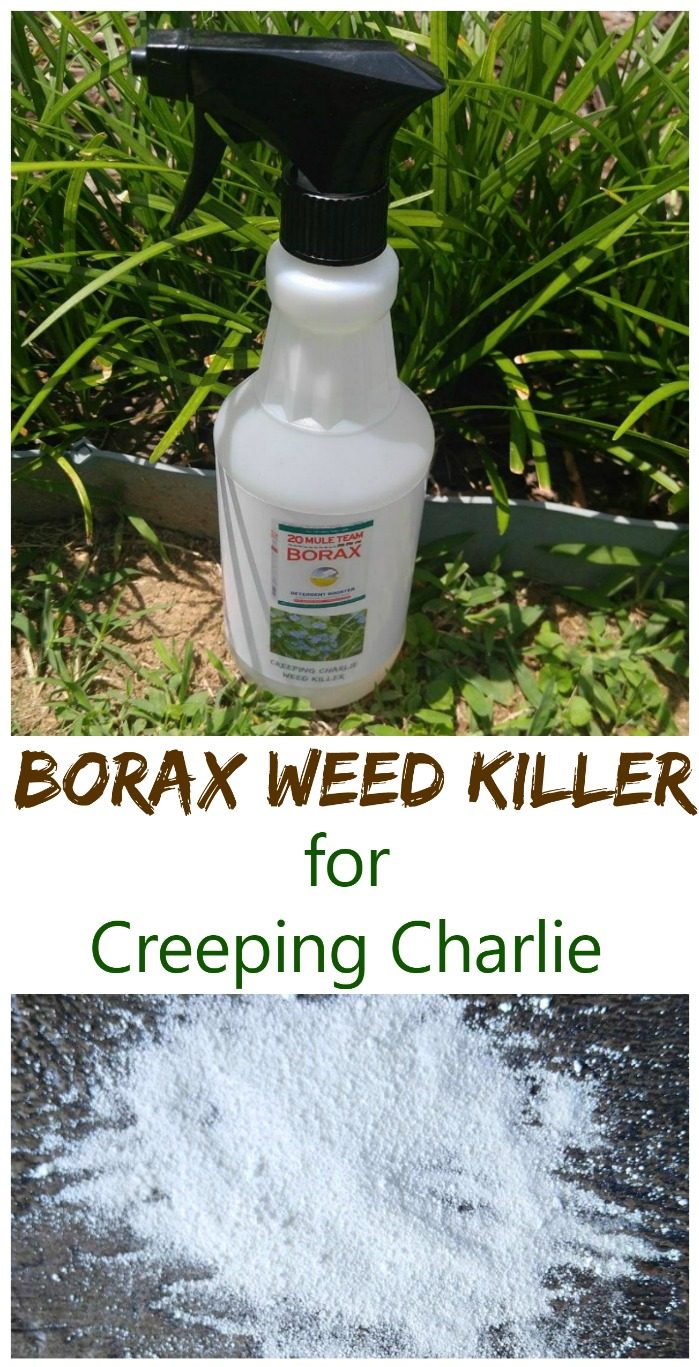 This formula will treat 1,000 sq. feet: (Don’t use it on a smaller area, or it will be too strong.) For use on established lawns.

This formulation is one that I found on the University of Iowa’s website.  They suggest taking care to use the proper formulation to avoid adding excessive amounts of Borax to your lawns.

not to be nitpicky but your article and comments refer to the University of Iowa when in reality it is Iowa State University.

Thanks for alerting me to my error. I have fixed the mention and my comments.

Hi Carol; Just wondering if you have tried using this Borax solution to kill goutweed? It's also known as Bishops weed or ground elder. I have the solid green leaf variety and it chokes out everything in sight! any tips would be greatly appreciated. With regards to pet toxicity; how long after application is it safe to put dogs back in garden?

Hi Mary, I have not tried this solution for goutweed, so I can't comment. As to the toxicity, I would not use it where pets are present. I don't have any idea when it would be safe to let them back on the lawn and would not take a chance.

Carol, tried the borax for creeping charlie. It rained a day after I applied , so first results were non existent . Tried again following week, this time i didn't try to mix with the 4oz. water first, just mixed gradually into the 2.5 gal's. of water. Mixes much easier that way. Anyway, again it rained right after application. Being as it's June, should I wait 'til the fall and try again. So far this is a washout as far as any results are concerned??Please let me know. thanks.

@Carol Speake, Thanks Carol, Frankly, I've given up on this working on the "infestation" that I have. The weeds don't seem to be even mildly affected by this mixture!? Could it be that I have a "super mutation of Creeping Charlie" and it's impervious to Borax??

It's hard to say how much of the mix will still be not washed away after the two rains. If it were me, I would wait, so as not to damage the lawn.

Just tried your Borax recipe and sprayed my weeds with a garden sprayer which held the whole 2.5 gallons . Now I'll wait 'til those pesky weeds start to show signs of dying . Should I have mowed before applying? Thanks for a great tip.

I'm not sure about mowing first. Iowa State University suggests apply the Borax weed killer when the creeping Charlie weed is actively growing in the fall. They say to choose a day when no rain expected for at least 48 hours. Then repeat two weeks later.

I've only tried this formula with Twenty Mule Team Borax so I can't comment on its effectiveness with other Borax powders.