When summer rolls around, you can easily see the effects of winter moisture on your home. These before and after power washing photos show quite a difference!

It’s been a busy summer for my husband and me. Power washing the exterior of our house and surrounding areas was one of this summer’s biggest projects.

I was, and I am still, amazed at how dirty my house was in areas where I was not really even aware there was a layer of dirt and grime. 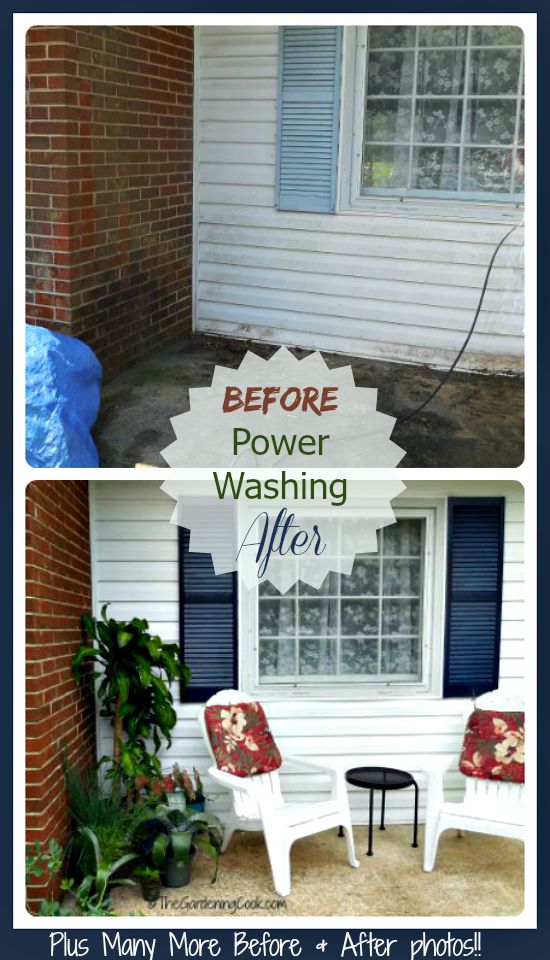 If you have never power washed before, and want some tips, be sure to have a look at my article on power washing tips and tricks. It shows how we did the project and gives lots of great tips if you want to do the same for your home.

Note: Power tools, electricity, and water can be dangerous unless used properly and with adequate precautions, including safety protection. Please use extreme caution when using power tools and electricity near water. Always wear protective equipment, and learn to use your tools before you start any project.

Power washing photos – before and after

Now that you know how to power wash, I thought it would be fun to share some of my before and after power washing photos.

They are a great example of how different a house can look with a good power washing. Bear in mind that we also painted our shutters and installed a new front door, but the real change came from the cleaning.

It’s just amazing the difference it made to our curb appeal This patio was a horrible mess before we cleaned it.

Years of dirt and grime made it a real eyesore. We used it for storage, and it had become a place to keep our trash and recycling bins, bins for yard waste and a large number of bottles of oil, weed killers and other items that should have been kept in a shed.

It’s amazing what one can get used to! I never even thought about the fact that there was a patio under all that mess. I just knew it was an eyesore. 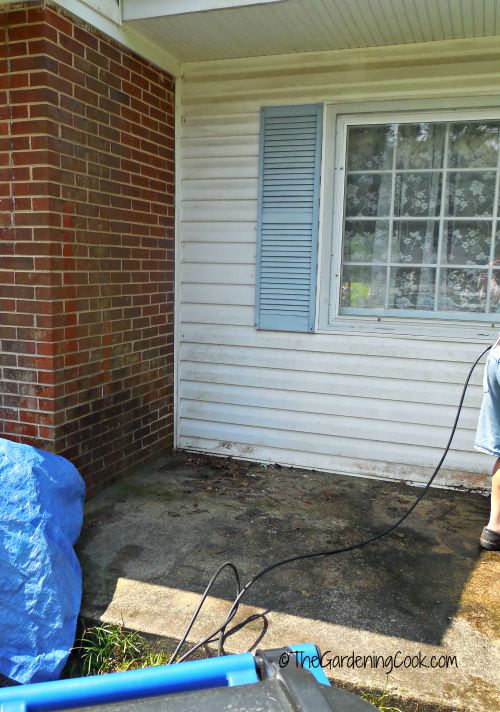 Can you believe this result in my after photo? We have a delightful seating area there now. A couple of inexpensive plastic Adirondack chairs and a small wrought iron table, plus a couple of mark down chair pillows and a few plants makes it seem like a totally different spot.

Notice how clean the siding, brick work and patio base are now? What a difference a little elbow grease makes. I shake my head every time I look at it and remember how it used to look! 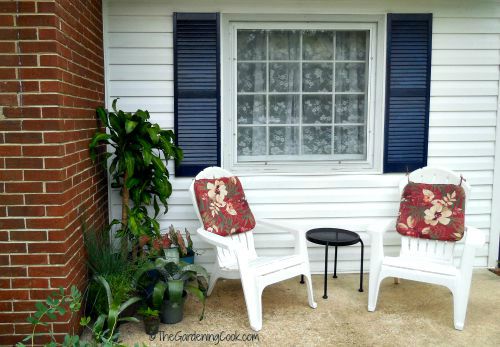 The entry steps were in a similar state. I never noticed how dirty they were because of the huge boxwood shrubs (more like trees!) that dwarfed the entry.

Cutting them down showed just how discolored the top step, in particular, had become, and also it opened up the entry beautifully.

Notice that welcome mat too. It was almost black and got very slippery when it got wet, because of the mold on it, so it was also dangerous. 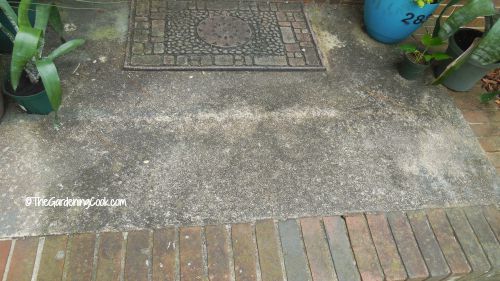 After cleaning, it’s a totally different color. And look at that welcome mat! It actually matches the brick work, which is why I bought it years ago. It’s hard to believe this is the same step.

I think that the thing that amazes me most about this project is how many times the color of the underlying item changed after getting the grime off of it. I’m still stunned when I look at my house after the power wash. 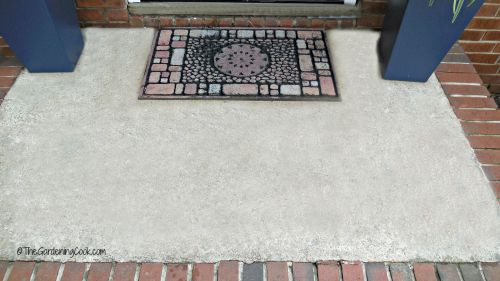 Our walkway was covered another case of “I didn’t know what color you really are under that dirt, but I plan to find out.”

I honestly thought it was dark asphalt like a road. In actual fact, look at the light color underneath all that grime. It was somehow satisfying to clean that walk.

Richard and I took turns. We used long slow motions and the dirt just stripped away with each stroke. 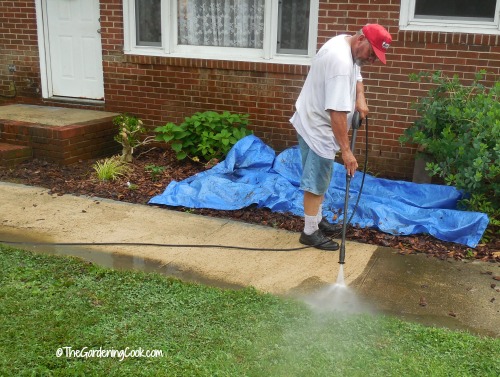 Hard to believe isn’t it? It really sets off my new flower garden bed now with the mulch neatly piled up on one side and the trimmed grass on the other. 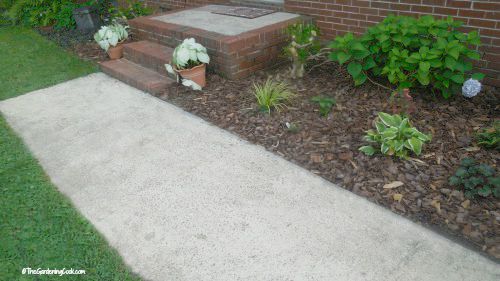 The areas under the shutters was a mess from years of hornets and other insects making nests in there. Plus the previous owners decided to take the easy way out on painting the shutters by painting them on the brickwork, and there was a lot of light blue paint on the bricks.

The overhang of the roof was also full of spider webs and dust and dirt. 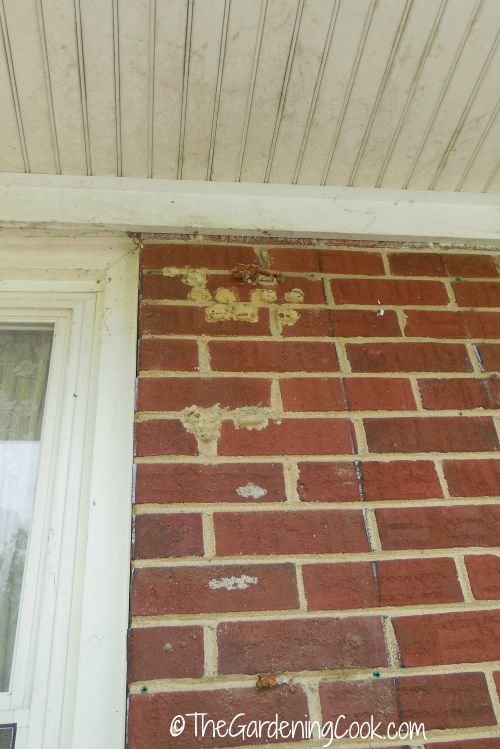 After a blast with the power washer, the brick looks like new again. And the blue paint is gone. Power washing will actually remove some old paint if it is not too thick.

I used to hate the color of our house, but the darker blue on the shutters and the cleaned off brick makes me love the color now. 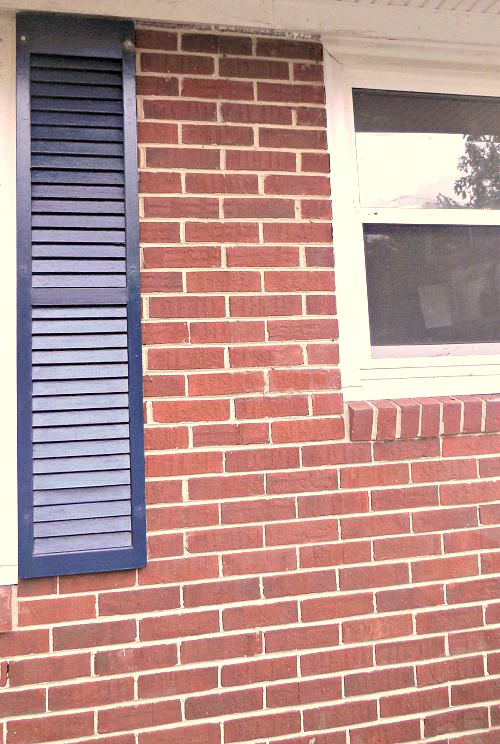 The overhang was one of the hardest parts, since this had to be done more by hand.

Power washing with a strong blast would have pushed the overhang up and allowed water to get up and under it which would have caused problems later on, so we scrubbed it. It is so white and bright now! 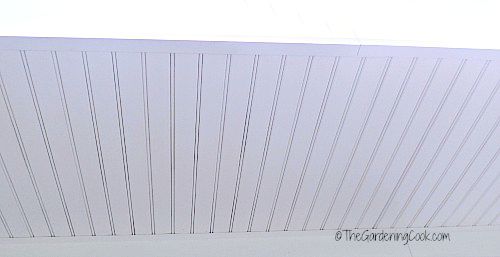 Power washing is not just for houses. Once I got started on our project, I was actually looking for other things to clean. I mentioned the welcome mat before.

The blast from the power washer literally blew the mold and grime off of it. It cleaned up very quickly.

I had planned to buy a new welcome mat, thinking the old one was not usable any longer. But think again….It is a great match for the bricks and looks wonderful on the step now. 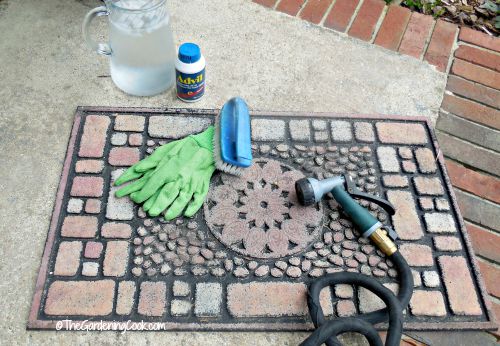 There are garden beds all around the perimeter of our house, planted with perennials and other shade plants.

But they were not displayed to their best advantage with the scum and light mold sticking to the bricks above them which really detracted from the overall look. 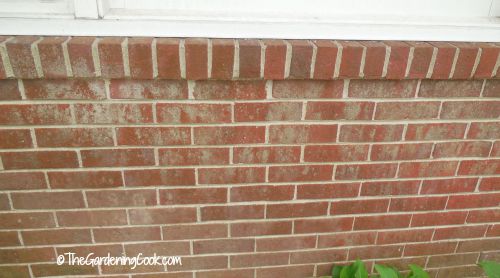 After power washing, they show case the new garden beds beautifully. It is hard to believe this is the same wall. But it is! 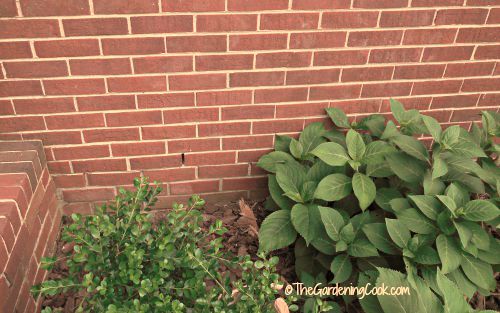 The next project was a birdbath that was sorely in need of a good cleaning. I have to keep cleaning this every few weeks to keep the water safe for the birds.

During the time of our big project, I had let it get away from me. It showed this too. It was very dark and discolored with a lot of gunk growing in the water. 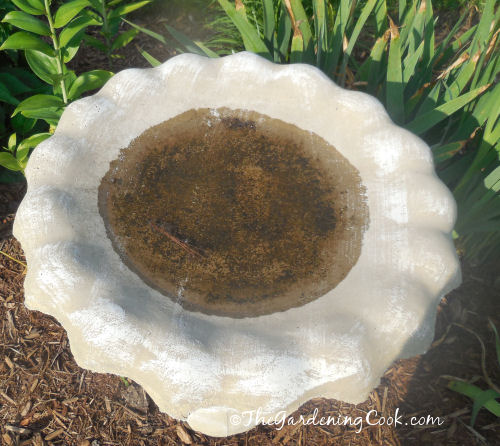 A quick blast of the power washer and it was like new again. No hours of scrubbing and covering with a plastic bag to let the cleaner do its work.

This was fixed in a flash. Now the birds will actually enjoy splashing around in here. 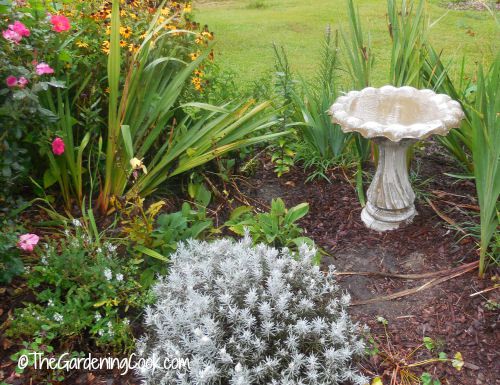 And now that the job is finished, it is time to relax on my newly found patio with a garden magazine!