This delicious Bailey’s fudge recipe has a surprise addition of coffee for a great flavor. It is creamy and sweet and has a lovely consistency.

This year, make some Irish Cream Fudge as a part of your Christmas traditions!

Who doesn’t love the taste of a glass of Bailey’s Irish cream during the holidays? It is rich and thick and so creamy with that delicious hint of whiskey in the background.

Now imagine that taste in a piece of holiday fudge!  BOOM! What a flavor combo!

Making fudge is a favorite of mine pastime during the holidays.  I don’t make fudge very often during the year, because I do try to watch my weight, but during November and December I indulge in it.

This recipe for Irish Cream Fudge infused with Bailey’s Irish Cream & cold Coffee is as tasty as can be. It is my favorite sweet treat, so I like to have a lot of fudge recipes on hand.

NOTE: This is not a really easy fudge.  In order to get the right consistency, the main fudge mixture must be boiled for five minutes or so to get it to the soft ball stage. But the flavor makes it worth the effort.

Are you a fudge lover like I am during the holidays?  Try one of these recipes, too:

To make the Irish Cream Fudge, you will need Bailey’s Irish Cream.  I had a bottle on hand that was unopened, but when I undid the top, I discovered to my horror that it had gone off and I could not shake it to make it good again. 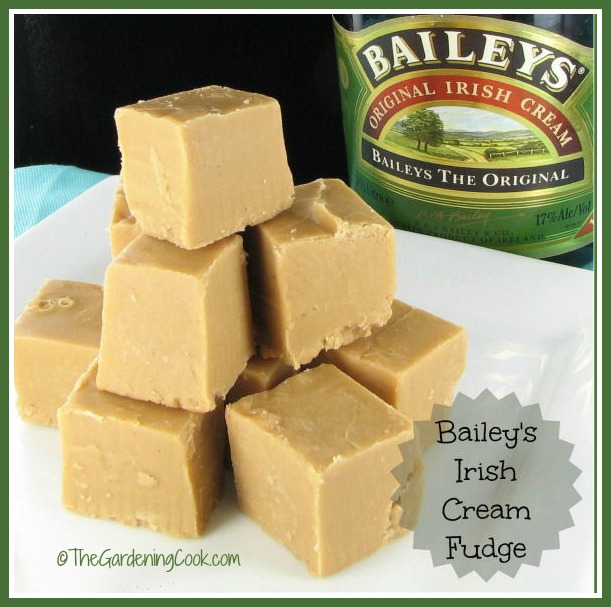 Since I had all my ingredients out and it was a Sunday, I decided to make my own Bailey’s Irish Cream.  It is just as good as the original and costs a fraction of the price. 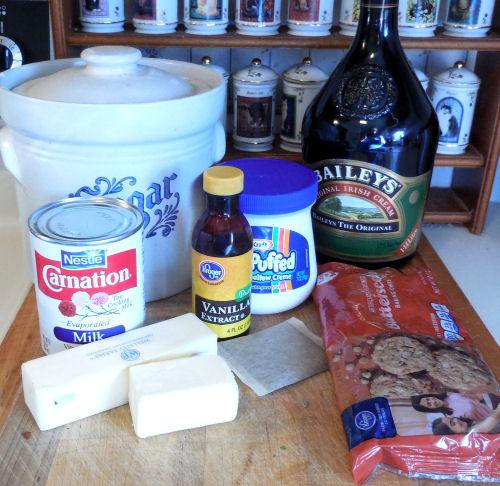 To make the fudge you will need:  (affiliate links) 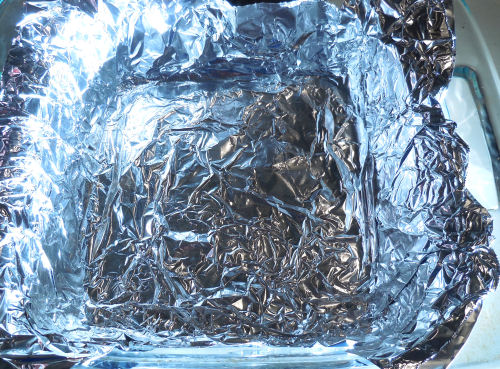 To make this Bailey’s fudge recipe, start by placing aluminum foil in the bottom and up the sides of a 9 inch pan.  It will make it so much easier to get the fudge out later.

Just use the pieces on the top as handles and then peel it off later. 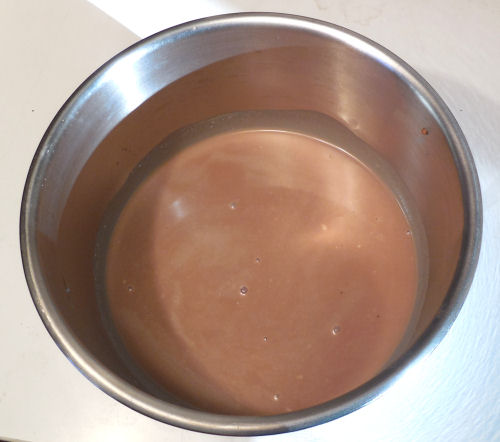 Mix together the Bailey’s and cold coffee and place it in a microwave safe bowl and heat for about 20 seconds until it is well  mixed. 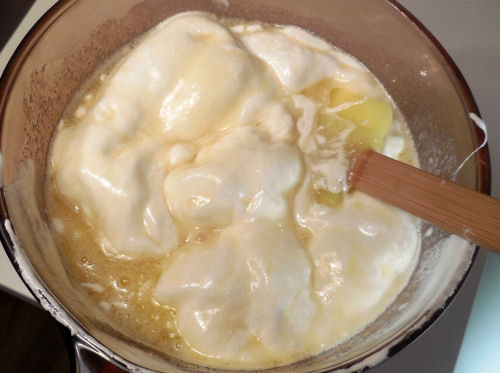 On the stove top, combine the butter, evaporated milk, sugar and marshmallow cream until well mixed and smooth. 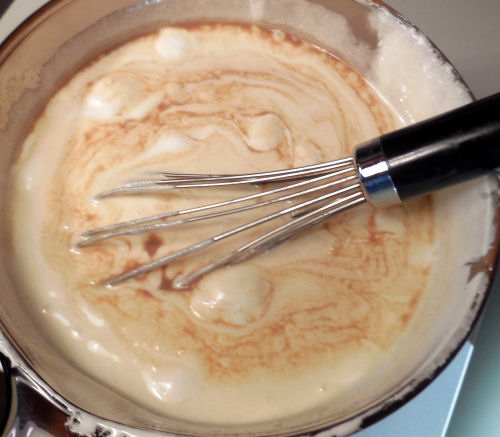 Slowly stir in the Bailey’s Irish cream mixture and mix well.  Continue to cook after it boils for five minutes, stirring the whole time, so that it does not stick.

It will be at the soft ball stage. (drop a bit of the fudge mixture into a glass of water…it will form a small ball.) 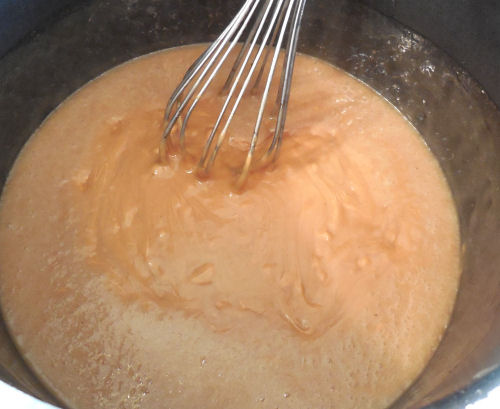 Stir in the butterscotch chips and vanilla extract. 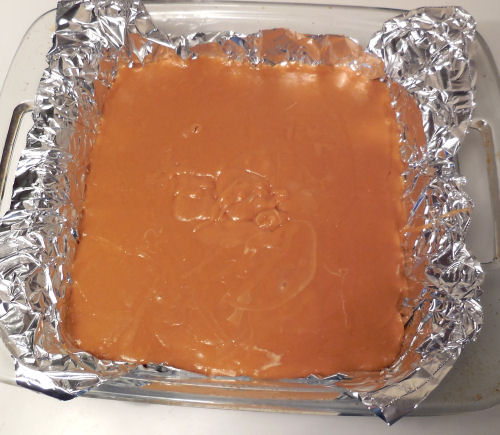 Pour the mixture for the Bailey’s fudge recipe into your prepared pan.  I had to hurry as it was starting to harden.  I love this stage.

I know that I have cooked it long enough when it starts to harden on the sides of my cooking pan.  There is nothing as discouraging as spending time on fudge and not having it set later.

If you enjoyed this fudge recipe, be sure to share it with a friend. Here is a tweet to get you started:

The holidays will soon be here and fudge is a part of any dessert table. What is better than plain fudge? Fudge made with Bailey's Irish Cream. It's sweet and creamy and a hit at any holiday gathering. Click To Tweet“

This Irish cream fudge has the perfect texture. I like a fudge that is not too sticky and this one cuts into beautiful chunks.

The taste is sweet and creamy with a hint of coffee in the background.  My husband is a big coffee drinker and really likes this fudge! 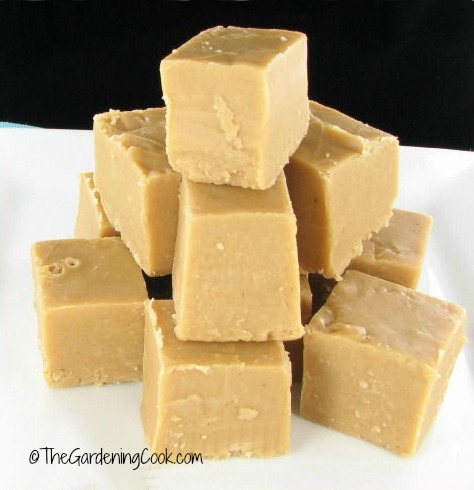 Would you like a reminder of this recipe for Bailey’s Irish cream fudge?  Just pin this image to one of your Pinterest dessert Boards.

Hi,I'm from New Zealand, what can I use instead of the marshmallow cream as we don't have this product in our country.

Hi, I make fudge every year usually 4-5 different types. I questioned the amount of sugar to my other recipes that use marshmallow cream. Your is 1 cup more. But the reviews seemed ok. Well mine turned sugary. It’s not humid, accurate candy thermometer and I’m a candy maker. So suggestions why mine flopped? Son in laws birthday is Saturday and he loves fudge and Irish cream. ???

Hi, I'm not sure why yours didn't set well. It's bee a few years since I have made this recipe (I experiment with new fudge recipes each year. But I do remember when I made it last that the texture was perfect. The only thing I would suggest is to try it with 2 cups of sugar. I think it would still set well, but just be less sweet.)

Many recipes use sweetened condensed milk. I chose to use evaporated milk instead, so felt the fudge needed the extra sugar.

I have to redo the photos in the recipe to be more up to date. I'll try the recipe with less sugar to see how it turns out.

Thank you so much for sharing this recipe! As an inexperienced fudge maker the “soft ball” information was very helpful. This is the best fudge I’ve ever tasted!

Hi Amelie. Thanks for the kind comment. Glad you enjoyed the fudge! Carol

This might be a dumb question but I want to make sure I make this right. The recipe calls for cold coffee. That is in liquid form not coffee granules right?

Hi Elly. Yes, it is cold coffee, not the granules. Carol

Just curious does the butterscotch flavor overpower the fudge. I was thinking of using vanilla chips

I liked the flavor of the fudge a lot but I love butterscotch. I'm sure any chips would work but the flavor would be very different with vanilla chips. Carol