Learn how to season cast iron cookware in just minutes with these easy tips!

Cast iron cookware is my new best friend.  My daughter has raved about the benefits of cooking with it for years and I only started using it recently.

Why use cast iron cookware?

There are lots of great reasons, but these are some that appeal to me.

It has even heat distribution.

If you have ever cooked with non stick pans where everything floats to the outside of the pan, you will know why this is an important feature to me!

It is easy to clean

In fact, you will actually save on soap, since soap will break up the tiny oil molecules that are embedded on the surface of a seasoned cast iron pan and it will lose its non stick ability.

Just use salt to clean the pan.

You won’t have to keep buying non stick pans.

No matter what the seller tells you, nonstick pans do not stay non stick.

Cast iron cookware can be re-seasoned to get back its non stick ability in about 30 minutes!

Cast iron skillets are truly nonstick as long as you season them correctly. See my tips below for seasoning your cast iron cookware.

It can take the heat

450º or so is about what most cookware can withstand.  Occasionally, you will get one that will go to 500º.  Cast iron?

Put it right on an open campfire and cook away.  Try doing that with your non stick pan!! 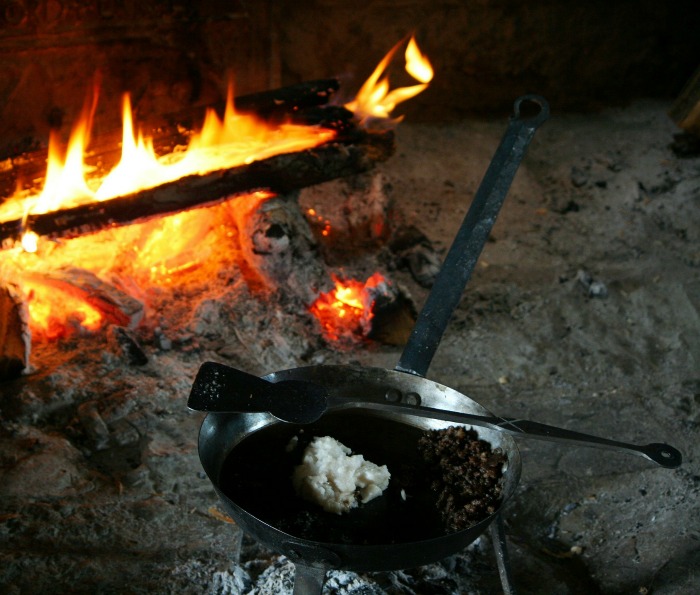 This cookware is made of iron, after all. It will take abuse. It’s already black so you don’t have to worry about discoloring it.  It may rust, but you can easily clean it and then re-season it again.

What is not to like about all these benefits?

I got hooked on cast iron cookware when I found the cutest cast iron baking pans with indentations like ears of corn.

It’s perfect for my buttermilk corn bread recipe and gives the cutest corn bread pieces ever.  I found the pan on a recent antique hunting day trip with my husband in one of our favorite consignment shops. 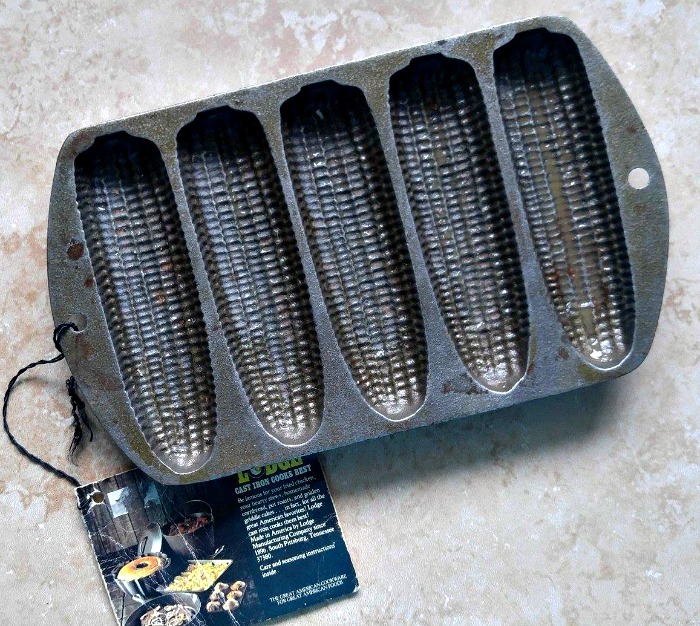 Before you try to season cast iron cookware, look to see if it has signs of rust.  My baking pan still had its original tag on it, but also had a few rusty areas on it.

So I set about both cleaning and seasoning it again. I just poured some salt in the middle of the pan and then added vegetable oil.  I scrubbed it and then washed it with normal dish washing soap and hot water and dried it completely.

Now it was time to season the pan.

First I preheated my oven to 350º. While the oven was preheating, I greased the whole top and indentations on the pan with a generous helping of Crisco shortening.

Pure lard also works well for this step. I made sure to really get the shortening into all the crevices of the corn shaped molds. 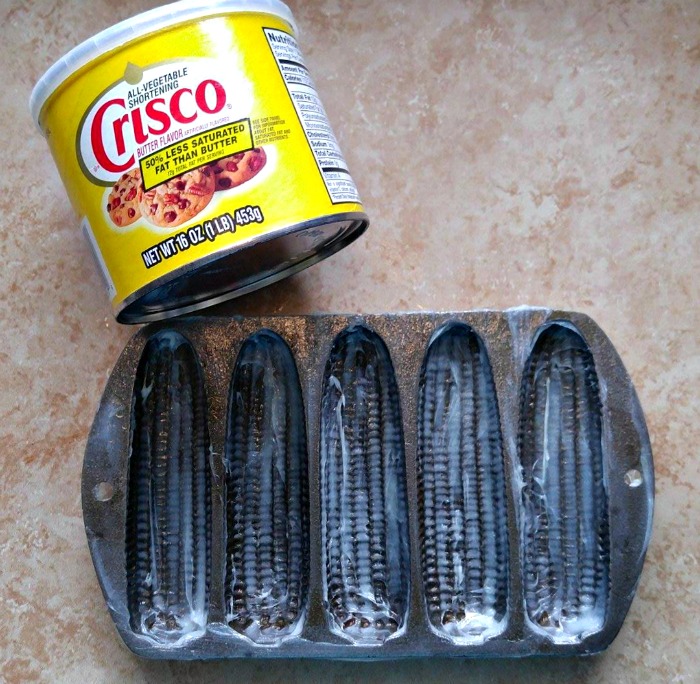 I placed the cornbread pan in the oven for 30 minutes.  Instructions state 30 to 60 but my pan was small so I went on the shorter time and it worked fine.

A larger frying pan would probably take the full 60 minutes.

When the timer went off, I removed my pan.  The wells were full of melted shortening which insured that the indentations had been well seasoned. I used paper towels to soak up the excess shortening. 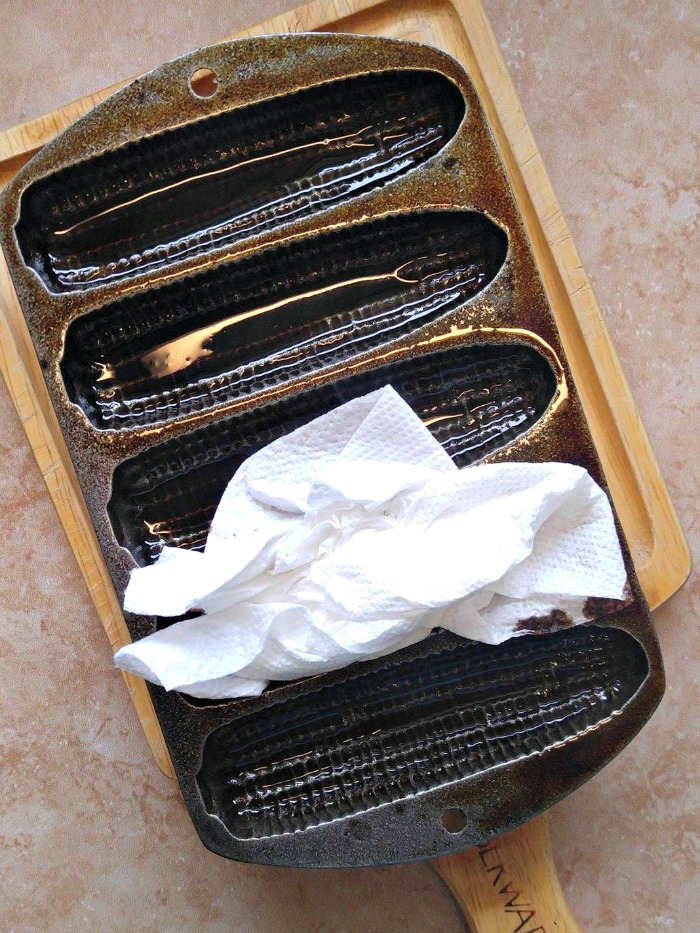 I could tell that the time in the oven allowed the rust came off when I saw the color on the paper towels. Rust colored, for sure! 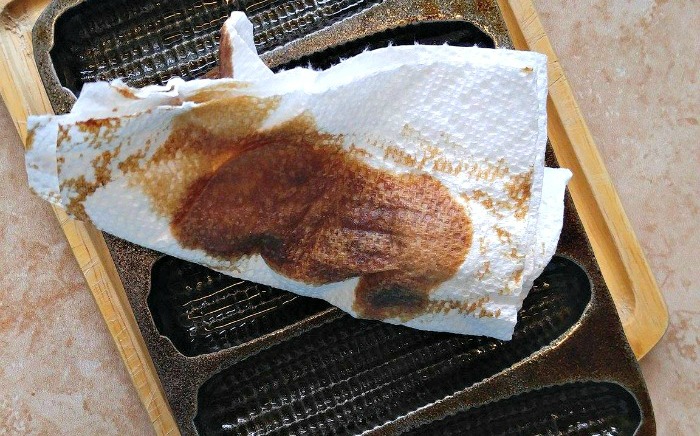 I used more clean towels to go over the whole surface of the baking pan.  Now it is ready for using to make my buttermilk corn bread recipe.

I just can’t wait to see the corn bread shaped like ears of corn.  What fun! 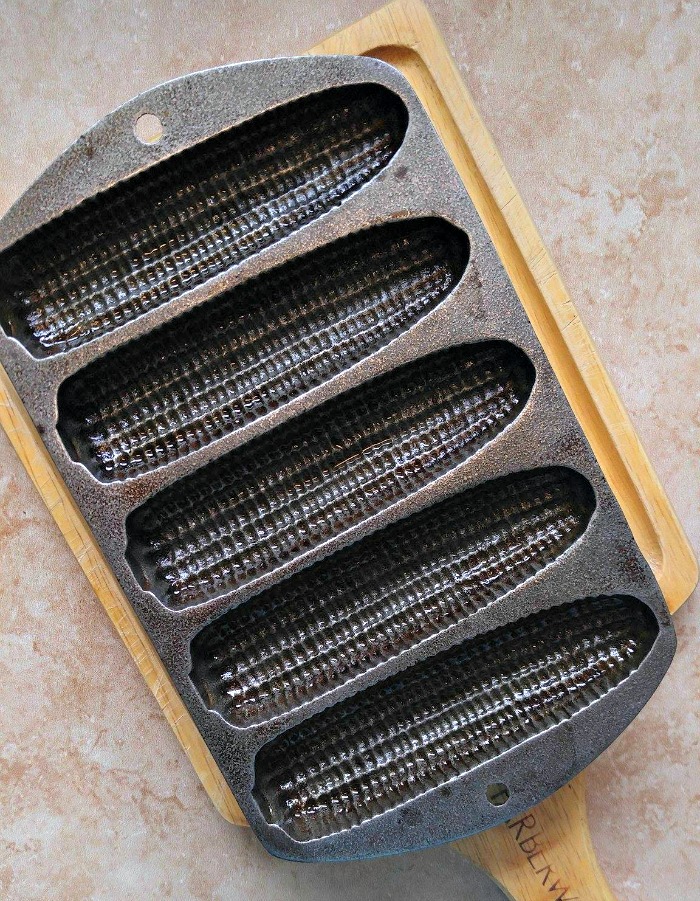 Final tip:  After each use, coat the inner surface area with more oil before shortening.  The instructions on my pan says that Pam Non Stick Cooking Spray is what they recommend.

Coating with a thin layer of oil after each use keeps the rust from forming and helps the pan keep its non stick ability.

See how easy that was?  Now, I am off to clean a cast iron fry pan that has been sitting in our shed for years.

This may be a harder job than my muffin pan! 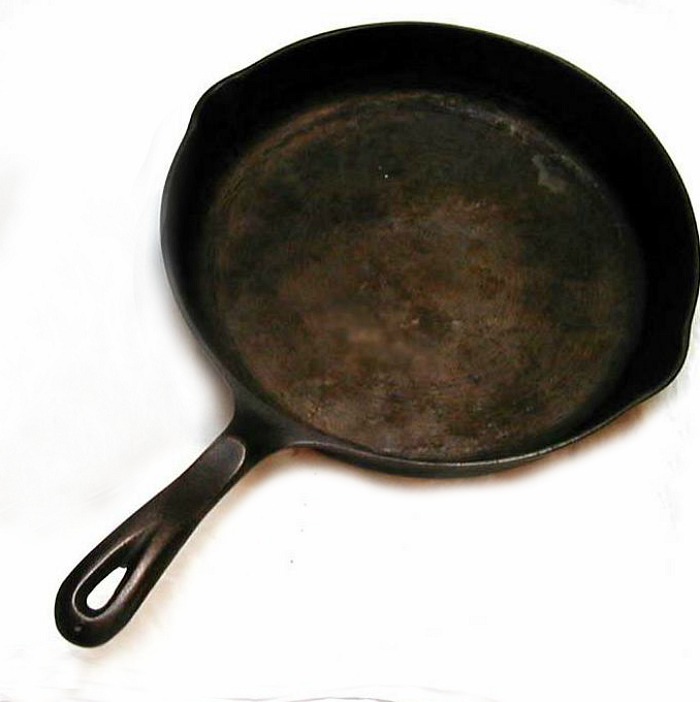 So you have any other tips to season cast iron cookware? Please share them in the comments below.

For more household tips, see my Pinterest Household Tips Board.